Skip to main content
Log In Register
Haibike SDURO HardSeven 8.0 e-bike review £2,999.00
Tourer that is slightly better specced and with more relaxed geometry than its rivals 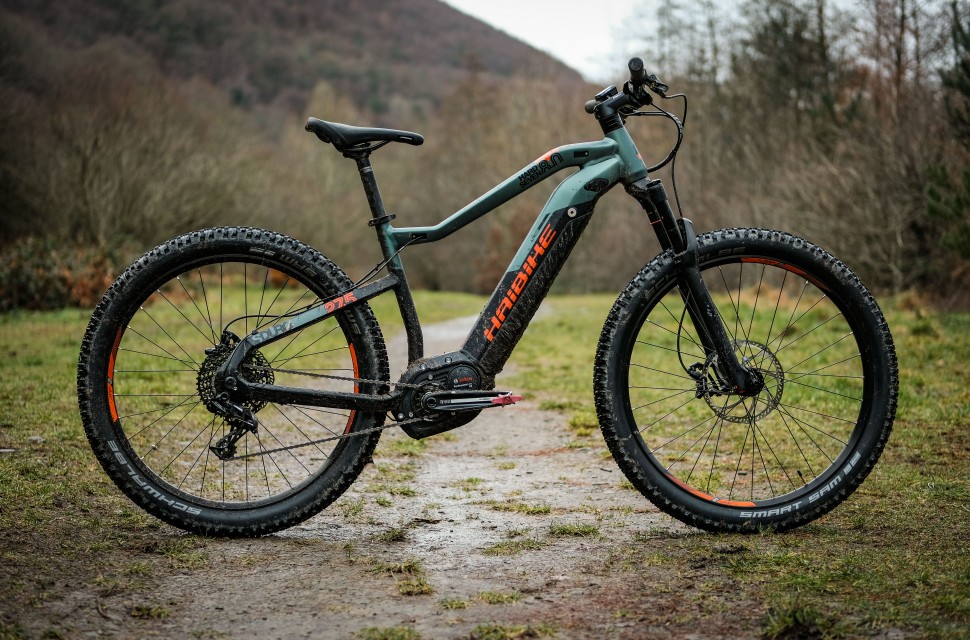 Rachael Wight
|
Feb 27 2019
|
Overall
Quality
Performance
Value
What's good?
What's not?
Buy if...
You want a touring mountain bike to venture into the hills in comfort

The Haibike SDURO HardSeven 8.0 is an aluminium hardtail e-bike best suited to touring and tamer terrain. Built for comfort over the distance the e-mtb does what it says on the tin and is pretty good value too, but it’s not a trail shredder.

There are a massive number of models in the SDURO HardSeven range, 11 in total, starting from the HardSeven 1.0 at €1,999 all the way up to the HardSeven 10.0 at €3,999, you're bound to find something to suit your budget. We tested the 8.0 model which is priced at €3,399 (£2,999), which is a better specced bike than many competitors with an 11spd drivetrain and a Rockshox Sektor fork. 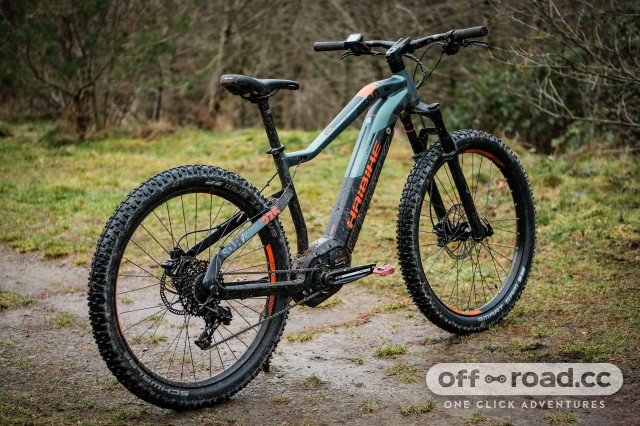 Our HardSeven 8.0 comes is powered by a Bosch Performance CX motor offering 250W and 75Nm torque. It’s a unit that offers from 50-300% of support through the four modes selected by using the buttons on the Purion display. It’s not the most intuitive way to alter the power mode, the buttons are more difficult to locate in comparison to a shifter style lever as found on the Shimano STEPS motors and the display here shows limited information. 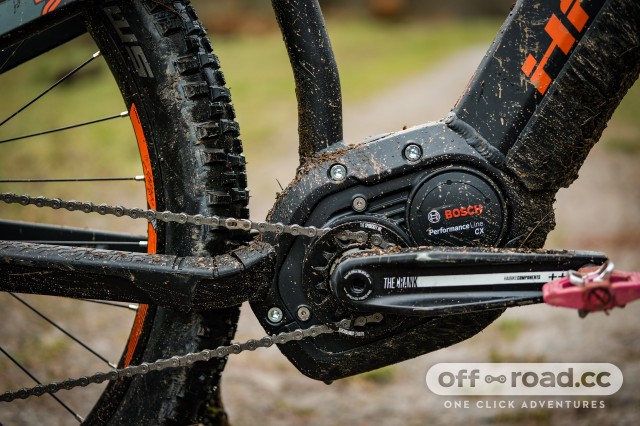 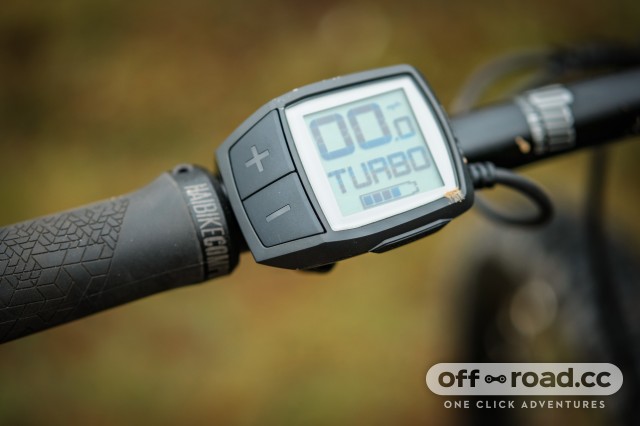 The Bosch system was powerful enough though, I mostly found myself riding in the lesser powered ‘e- mtb mode’ which gave enough extra oomph for smooth and more technical climbs alike. You can find out more about this unit compared to other rivals here. The Bosch motor with its internally geared design means that the unit creates a bit of drag that you don’t get with a direct drive chainring. It’s something to bear in mind as it is felt most when topping out over 15.5mph or riding with the motor switched off. This motor is a little noisier compared to other units we’ve used on Specialized and Merida bikes but it’s not so intrusive and it’s something you’ll quickly get used to. 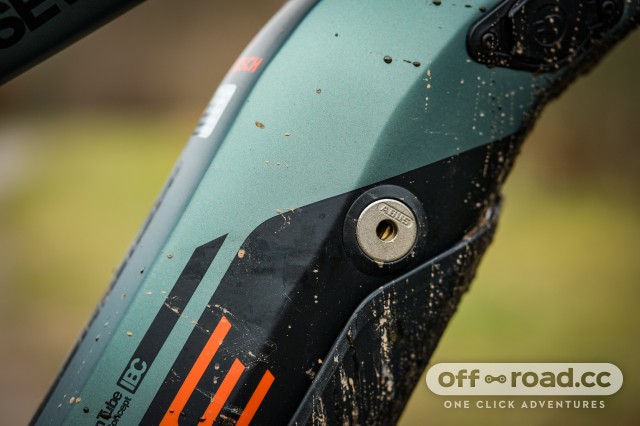 There’s a 500Wh Bosch Powertube battery which is mounted internally in the downtube and released by removing the plate on the underside and dropping the battery out.  The battery seems to last pretty well, after three hours of hilly trail riding I’d only wasted two bars of battery when used in the middle two modes on offer (Tour and E-mtb), I only weigh 57kg though and as you’ll know, this bike like others, will use more or less battery given the mode used, the incline ridden and the weight carried. 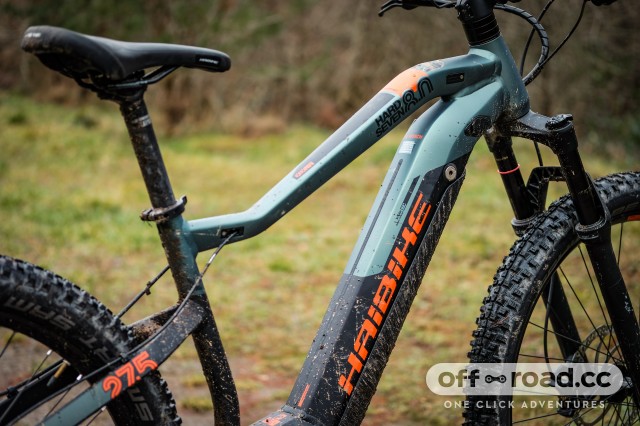 Elsewhere on the frame Haibike say they use a 'Gravity-Casting' technique taken from the motorcycle industry to produce robust, light pieces to case the motor. There is also a skid plate on the underside of the motor to protect from impacts which can easily be replaced. the bike weighs in at 23.6kg, not the lightest considering we've weighed full suss e-bikes at less, but then those bikes are twice the price! 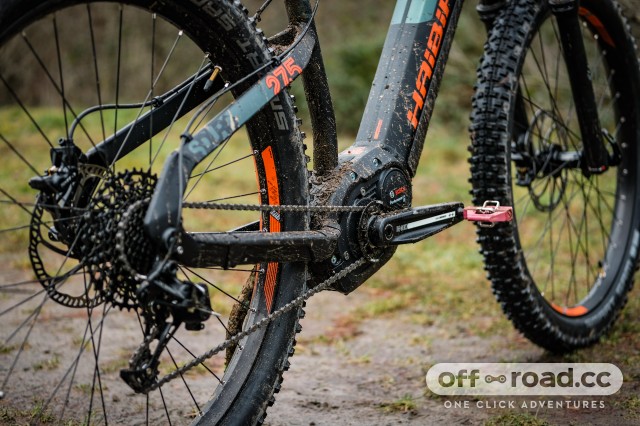 Up front, there is a Boost spaced Rockshox Sektor RL fork with 32mm stanchion, a lockout and 120mm of travel. It’s not the most refined fork, over rougher terrain, its quickly out of its depth with the weight of the e-bike behind it making for a tiring ride. But for more sedate touring or canal path riding, it’ll soak up the bumps well enough. The new Sektor RL has been altered recently to use the DebonAir air spring and also to accept volume reducer tokens, allowing some tuning of the fork with regards to the progressivity, which is good if you do fancy tackling some more serious terrain on this bike. 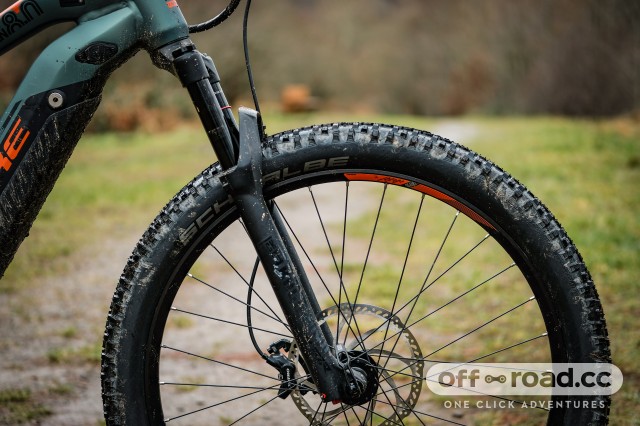 Haibike have opted for a SRAM NX 11 speed drivetrain, where the 11-42t cassette which works well to winch you up the climbs, the cassette range is plentiful on an e-bike such as this. To stop there are Tektro Orion M745 brakes with a 203mm rotor on the front and a 180mm rotor on the rear. I've used these brake before on non-electric bikes and found them to be pretty good; not uber powerful but reliable. On the heavier e-bike though, they struggle to pull you up as quickly as you might expect from a four piston brake when braking from higher speeds. 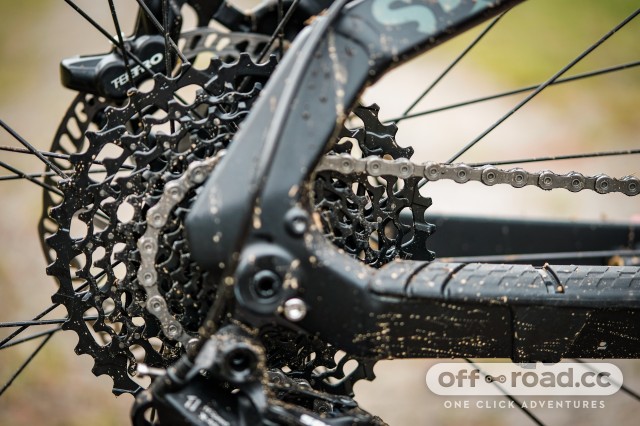 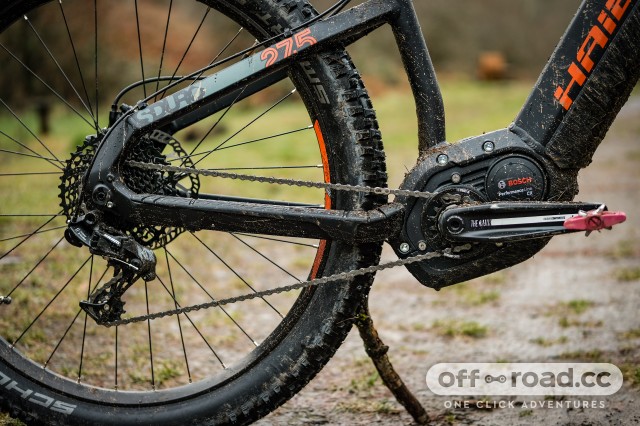 The bike uses Rodi Tryp 35 rims with Haibike's own hubs. The rims which are wide enough to set the Schwalbe Smart 27.5 x 2.8” tyres to, giving a good profile to the touring tyre. The Smart Sam’s close centre tread rolls well and I found the tyre to give good grip on hard pack trail center terrain. 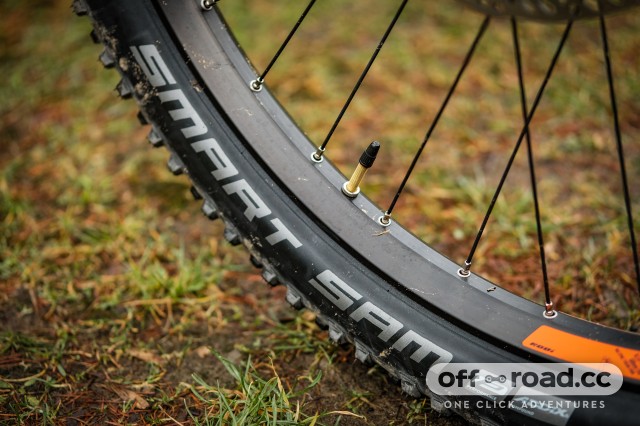 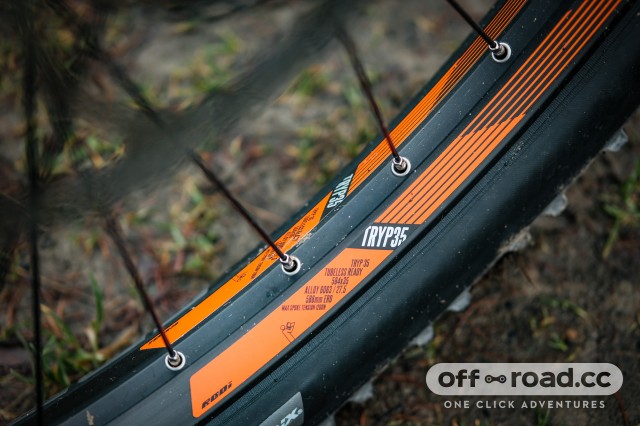 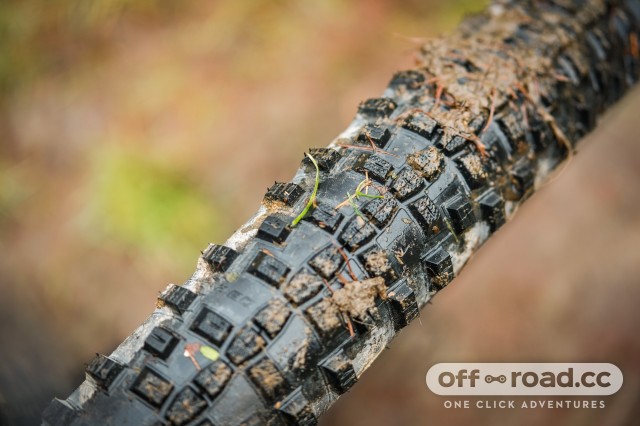 The cockpit is equipped with mostly Haibike kit, there’s a ridiculously long stem, a 740mm wide bar, Haibike own-brand grips and a 31.6mm seat post. Cable routing runs internally inside the front triangle and then externally down the top of the chainstays, with a spare hole near the headtube for an internally routed dropper post if you choose to upgrade the bike in this way. 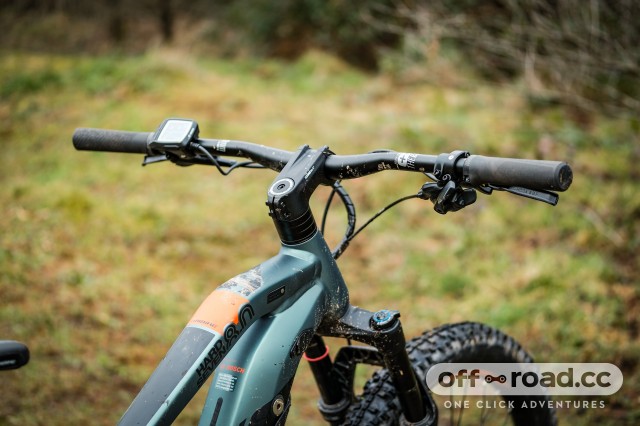 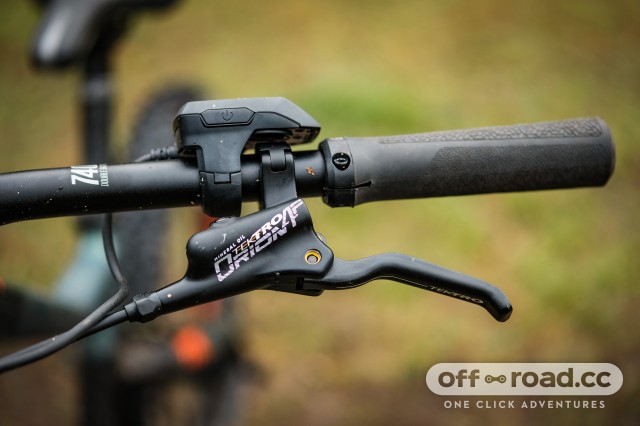 The SDURO HardSeven 8.0 is firmly aimed at the touring market, it’s a hardtail with geometry and a spec that is best suited to tamer gravel paths than it is to razzing singletrack. That said, I took this bike to Cwmcarn, Wales for a lap of the Twch Trail and it wasn’t that out of the depth. The 67° headangle and is perfectly reasonable for trail center razzing but the tall head tube leave you sitting quite upright and the short reach is less confidence inspiring on the descents.

The rear end is quite long too, chainstays for 460mm make this feel planted but a little immovable on the trails. The long stem and long rear end gives a clue to the intentions of this bike, it’s a comfortable tourer, happy to get off the beaten gravel track but really more at home taking the tow path, and for that is a no fuss workhorse. 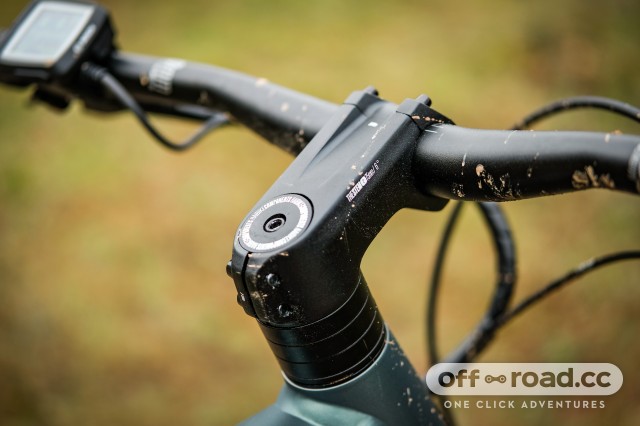 If you like, or can at least stomach, the styling and are happy to make some adjustments to the stem length then the Haibike HardSeven 8.0 has the edge over the pricing of its competitors. It nudges ahead of bikes like the Trek Powerfly and the Giant Fathom E+ in terms of the kit list and sports slightly more relaxed geometry too. But if you want a hardtail that is more 'trail orientated' you might want to glance towards something like the cheaper Vitus and their E-Sentier for geometry and value.