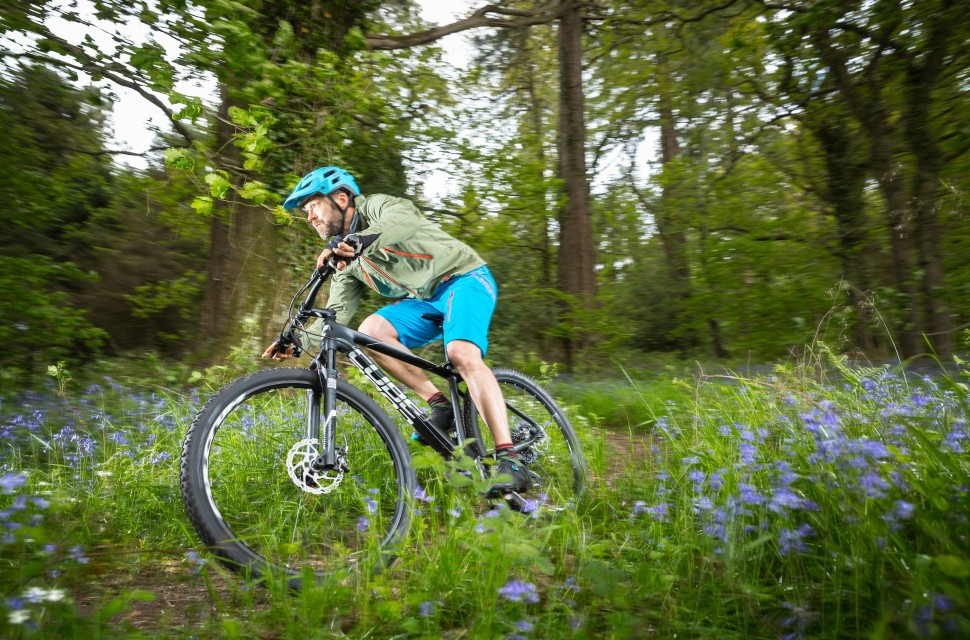 If you're after a seriously rapid and lightweight cross-country race bike then Cube's Reaction series of hardtails has always delivered, but the Reaction GTC One gets the added benefit of Shimano's clever Di2 electric shifting at a bargain price.

Even compared to direct sales brands, this Cube offers very impressive value for money, despite offering the face-to-face backup and support of buying through a normal bike shop. Apart from the full carbon fibre frame, the attention grabber has to be the 11spd Shimano XT Di2 groupset with that uses clever servo powered derailleurs to move over the front rings and cassette. 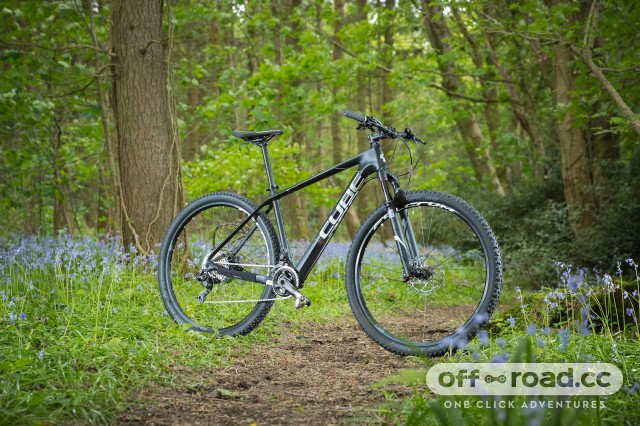 Cube has set this bike up with just a single shifter to control the whole lot using the neat Syncro Shift feature. You can change how and when it chooses to shift the front rings when you're moving through the cassette at the back and it gives a merry beep to warn you when a front shift is imminent. It's super smooth, requires no effort at the shifter and there aren't any cables to clog up with mud. 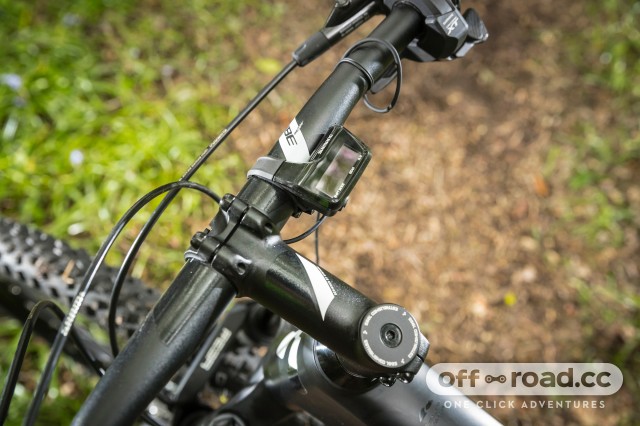 While SRAM's 12spd single ring X01 Eagle offering has almost the same overall gear range as well as being lighter and never needing to be charged, cross-country racers will be more interested in the small jumps between gears that Shimano's double ring setup allows. While I'm not usually convinced of the extra complexity of Di2 or double chainring setups for trail bike use, it makes an awful lot of sense here, where keeping your cadence in the most effective place makes all the difference. 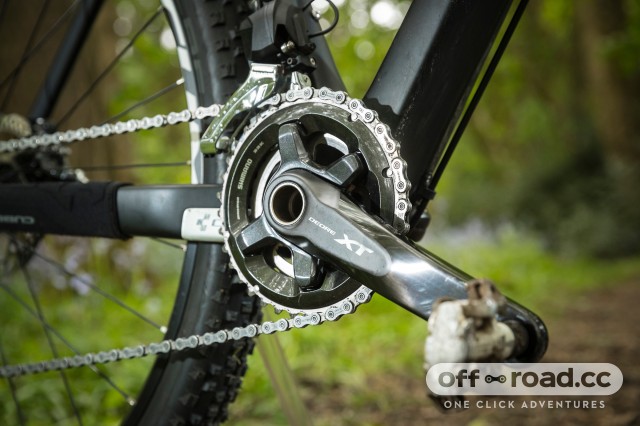 Our 19" sized full carbon fibre frame rolls on de-rigeur for cross country 29" wheels, though smaller sizes do have a 27.5" option should you prefer. Regardless of wheel size, there's 100mm of travel from a RockShox Reba RL fork with remote lockout up front. Cube hasn't cut corners by using lower rent kit where you might not notice and as such all the stop and go kit is from the XT groupset, save for the 11-42T SLX cassette. 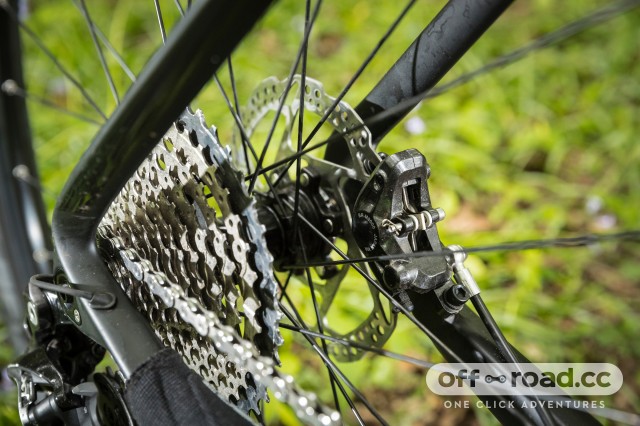 Of course, that's not to say that everything on the bike is top drawer kit, but the purse strings have been tightened in places where a serious racer is likely to have already upgraded a previous bike. There's nothing wrong with the own-brand aluminium bar, stem and post, but if you've got some lighter stuff lying about or just want to upgrade then it'd be a simple job to drop some weight and boost comfort in these areas. it's also worth noting that if you want to change the stock resin pads in the Shimano XT disc brakes to harder wearing sintered items, you will need to replace the rotors, as the cheaper items fitted aren't compatible with the more abrasive pads. 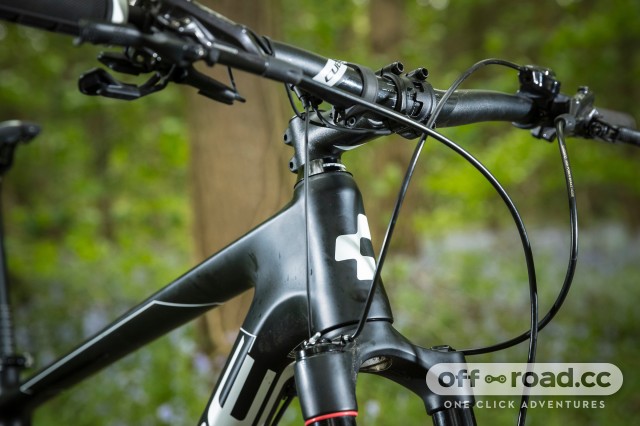 Regardless, the 720mm wide low rise bars were about fine and gave decent leverage to muscle the bike about. I did find the 100mm stem a bit overlong as it biased my weight a bit too far over the front on descents, especially given the frame geometry is very much razor sharp and reactive rather than reassuring and relaxed. That's par for the course when you're talking about a race bike, where the ability to quickly switch line trumps any sort of trail bike-like cosseting and calmness. 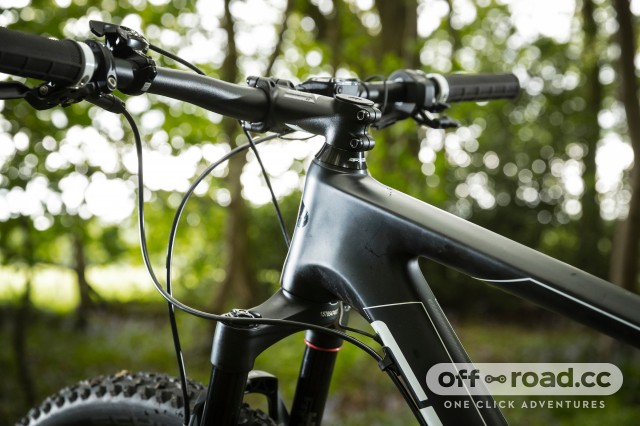 However, despite the 70º head angle and 73º seat angle, it's not too much of a handful when the riding gets technical, thanks in part to a low slung bottom bracket. Okay, you need your wits about you and the short travel Reba fork's relatively simple damping can get overwhelmed once you start hauling into seriously choppy sections, but that's not really this bike's raison d'etre. Keep it amidst tight and twisty singletrack and you'll be glad of the rapid handling as the sheer pace of the bike means you'll need to be on your toes to keep up with the way it covers ground. 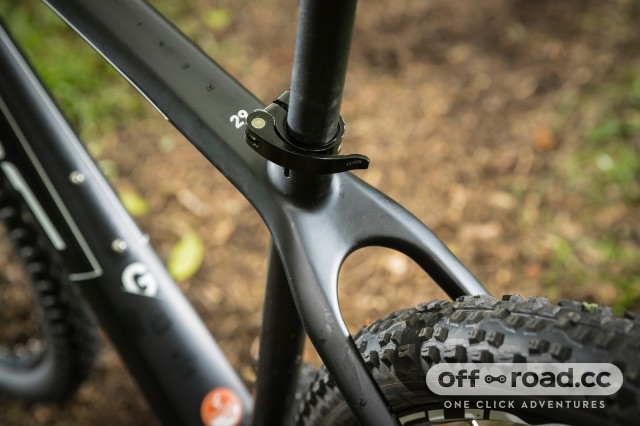 A good part of that pace is down to an impressively low 11.18kg weight, which really makes itself known on the climbs. The Fulcrum Red 66 wheels don't have a hugely wide internal rim and the Schwalbe tyres are pretty slender for a 2.25", but the fast rolling and lightly treaded Racing Ralph rear and marginally more aggressive Rocket Ron front combo in the LiteSkin sidewall flavour mean there's minimal resistance to acceleration. They can be overwhelmed fairly quickly in mud and the puncture protection from the thin sidewall isn't the best, but that's the tradeoff for rolling speed. Previous experience has shown that while the rims can be converted to tubeless easily enough, the LiteSkin sidewalls can often leak sealant, so that can often be trickier.

Even so, the sheer pace and climbing ability of the bike really is something to behold. Power transfer is positive and direct but the bike doesn't feel harsh when you're seated, thanks to the skinny 27.2mm post, which also houses the Di2 battery. I'm not the biggest fan of a Press Fit bottom bracket, but it does at least allow for an incredibly broad and stiff bottom bracket to down tube junction on this bike. 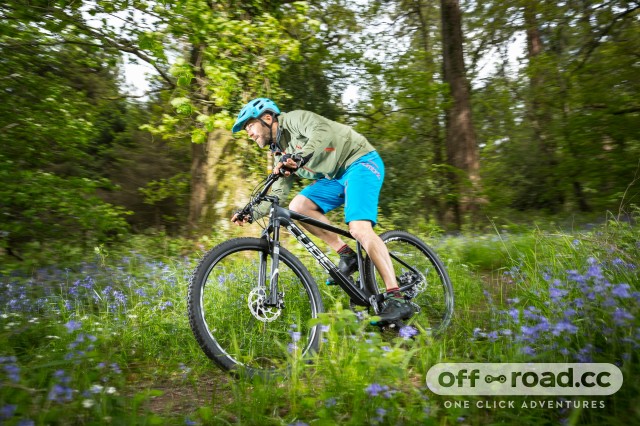 Though it's first and foremost a head down, arse up cross-country racing machine, pop on a shorter stem and broader bar and it'd certainly be capable of more varied riding, though I suspect it'd much rather be making your muscles full of lactic acid and PRs show up on your Strava. Either way, if you're after a bike that's both ready to race straight out of the box, then the Reaction GTC has you covered for a bargain price. Throw on a few choice upgrades and you'd have little excuse for not being on the podium as well.

Though the particular bike I tested is a 2017 model, it's possible to still buy one if you hunt online. The 2018 bike gets an almost identical spec, save for an even lighter C:62 carbon fibre frame that now has Boost hub spacing for stiffer wheels.

Frame: No compromise: that was the brief we gave to our design and engineering team. And boy, did they deliver. Twin Mould technology creates the ultimate combination of low weight, incredible efficiency and unbelievable comfort. We know which tweaks count: X12 dropouts enhance stiffness, while a 27.2mm seatpost improves comfort. And, of course, our acclaimed Agile Ride Geometry means you get all the benefits of easy-rolling big wheels, but with ride-by-wire handling.

It's a good mix of comfort and stiffness, especially for a race bike.

It's bang on the money for a classic, fast handling cross-country bike. Trail bike it is not, so 70edeg HA, 73Deg SA and a 609mm effective top tube and 425mm reach for the 19" frame.

It's sharp, though a shorter stem and higher bar might calm things down.

Any comments on technical descending?:

It's a cross-country race bike, so you need to be on your toes

Any comments on fork efficiency?:

Yes, it's a properly rapid bike for chewing up big distances

If I was a burgeoning cross country race head or marathon rider, yes.

Serious racers might want to more to more expensive, tubeless ready triple compound rubber for a better balance of puncture protection and grip.

Yes, if they wanted to go and ride big, not overly technical days or just hurt themselves via pedalling hard