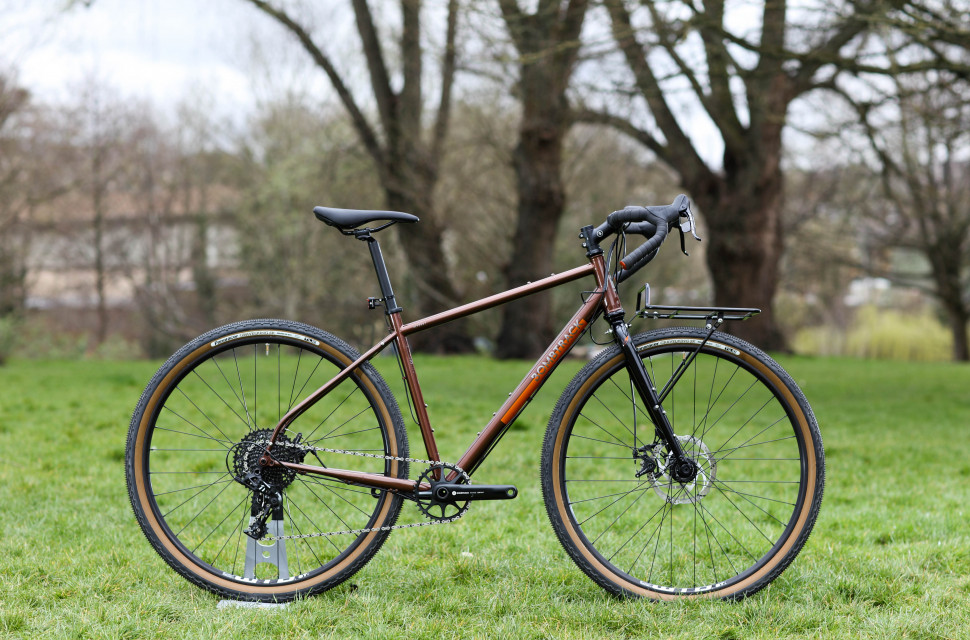 The Bombtrack Beyond 2 is a super comfortable all-steel adventure bike with 1x gearing, dynamo lighting, and ample tyre clearance. However, it's missing a rear rack and hydraulic brakes.

The Beyond 2 is the sequel to the original Beyond adventure bike from the German company Bombtrack. It's essentially the same bike, a machine "made to cross countries and continents via all kinds of roads and trackways", with an added front demi-porteur rack and front hub dynamo-powered Supernova lighting. It has the same double-butted steel frame, 29" tyres, multiple bottle bosses and baggage-carrying options, and the same flared super-wide handlebar. 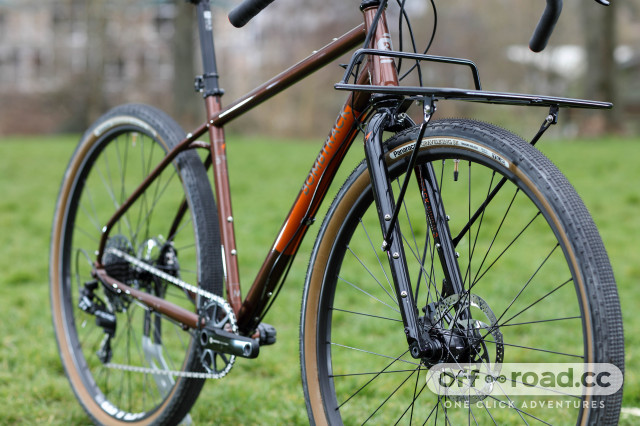 It's an all-steel affair for the Bombtrack Beyond 2. The 4130 Chromoly steel frame is paired with a fork of the same material, with internal routing for dynamo cables. And the Beyond 2's touring and bikepacking ambitions are clearly evidenced in its comprehensive range of fixtures and fittings.

There are bottle bosses on the seat tube and down tube, the latter with triple cage mounts for maximum versatility and a pair underneath the seat tube. 'Bento box' bosses on the top tube round things off. After all, you always ride with katsu, noriben or hokabne? Don't you? A nice bit of protein's always handy. More likely, you'll be using it for a bikepacking bag.

The Beyond 2 comes in five sizes, the larger three having 29" tyres with the smallest two 27" tyres. And though steel may be the most venerable frame material of all, it's far from a retro build from Bombtrack. The head tube has a 1 1/8" - 1 1/5" taper for maximum strength and reassured handling, and both the frame and fork come with thru-axles to make the most of the disc brakes. The Beyond 2 has a well-coordinated look too, and the attractive 'glossy metallic root beer' finish looks the part. 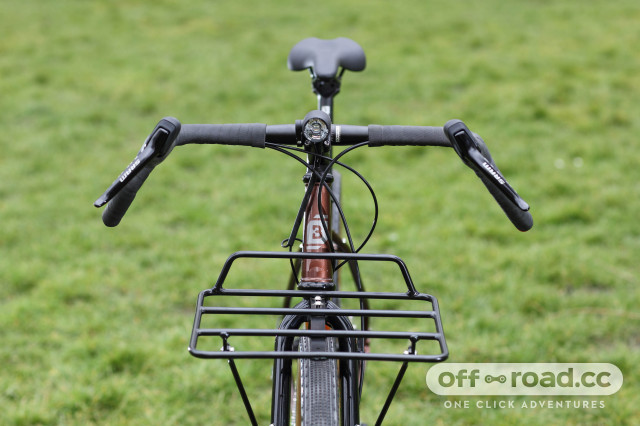 The geometry is pretty familiar for an endurance bike, with a long wheelbase and a slack 71-degree head angle. While the head tube isn't that short at 150mm on our medium, the 17-degree stem adds height at the front. Even with the 1,065mm wheelbase and 620mm front centre, the merest amount of toe overlaps with the super-wide tyres, maybe a millimetre or two. However, after weeks of testing, I only noticed this when I stopped to drop a letter in a postbox without getting off the bike, and the front wheel turned. The fact I hadn't noticed it before suggests it won't be an issue in day-to-day riding.

One result of the rear triangle's wide profile is that I couldn't fit my Tubus rack, at least without a raft of spacers between the rack and frame, which potentially reduces the stability and security of the rack. The Beyond 2 does come with a 'Deck' front rack, which I found very useful, but given the Beyond 2's price, I'd like to have seen a rear rack fitted as standard.

The Beyond 2's bike, kit and rider weight limit is an impressive 140kg, a shade over 22 stone. This should be way more than necessary for most riders pretty much all of the time. I'm not even sure I could pedal a bike carrying that much kit; I know I wouldn't want to… 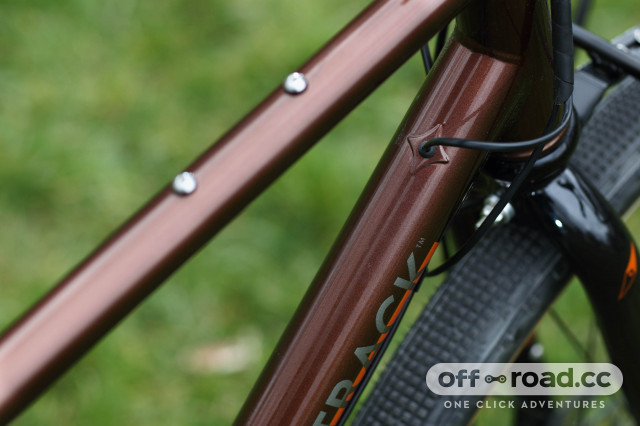 The Beyond 2's kit is based around SRAM's 1x Apex gears, with Bombtrack's own 36-tooth narrow/wide chainset and a wide-ranging SRAM 11-42 cassette, which provides a gear range around 24.4-93" with 50mm tyres. This is reasonable, though if you're carrying heavy kit on an extended tour and you hit some serious hills, you might find yourself hankering after a lower gear.

And if I was taking the Beyond 2 on a continent-traversing trek, I'd probably swap the chainset for a smaller one and keep the same cassette, as you can never have a bottom gear that's too low – fact! And while the 36x11 top gear isn't that high, this was never a concern. Yes, you may spin out when you start to crank it on a descent, but I'm never trying to break any downhill speed records. Shifting was smooth, quick and consistent, and I never unshipped the chain or felt like I would lose it, even with multiple rapid gear changes over poor surfaces. 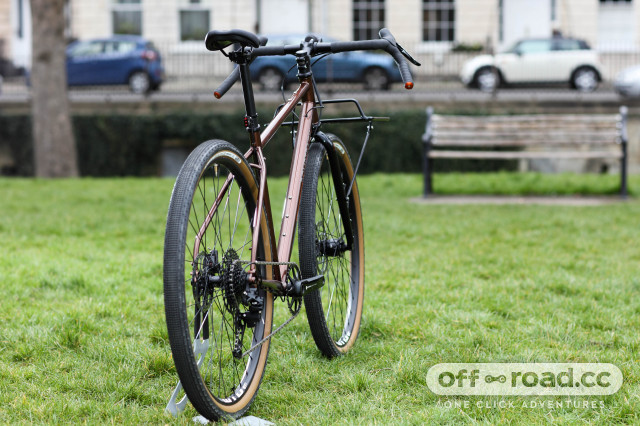 The Bombtrack's braking is courtesy of TRP's Spyre C disc brakes. These are mechanical rather than hydraulic, but they worked very well. Crucially they are a dual-piston design, with both pistons pushing against the rotor. However, they require more effort on your part and on long descents requiring prolonged braking, you will feel it in your fingers and wrists.

The thru-axles help maximises braking power, as does the 180mm front rotor, a size more often seen on mountain bikes, along with the more familiar 160mm rear rotor. The greater area of a large rotor helps deliver more braking power and dissipate heat more quickly.
And while I would have definitely preferred hydraulic brakes for their light action, I reckon with my so-so fettling skills, I'd have a better chance repairing cable discs in the back of beyond. 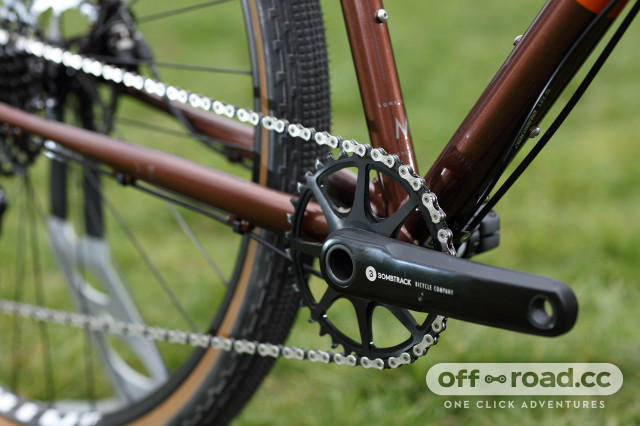 The wheelset is one of the Bombtrack's highlights, with both the rims and tyres tubeless-ready if you want to go down that route. Pump up the super-wide 50mm Panaracer GravelKing SK tyres to 50psi or so, and these didn't prove as ponderous on the road as I'd have expected given their size and knobbly tread.

They're never going to match slimmer, slicker tyres for speed – they're weighty and have a massive frontal profile – but they don't steal so much of your speed that you actually feel hard done by, and their excellent comfort helps to compensate for any loss of speed.

The GravelKing's tread comes into its own on grit and gravel, where the knobs dig in well, and their puncture protection should hopefully keep you riding rather longer. The tyres form a tough pairing with the WTB rims, though whether you need tyres quite as wide as 50mm on an everyday bike is a moot point. 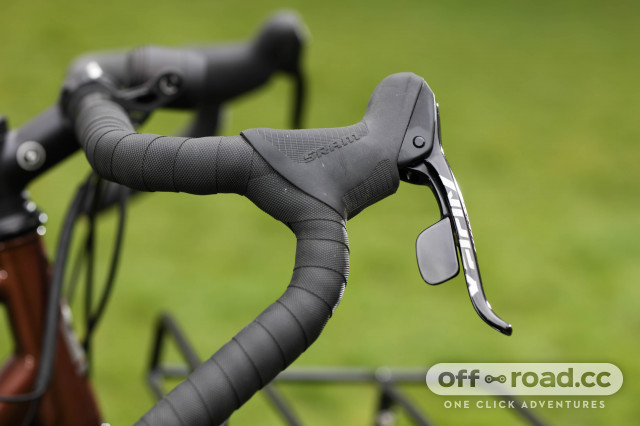 German bike manufacturers – and presumably the country's cyclists – seem to be big fans of dynamo lights, so it's no surprise to find a KT front-hub dynamo on the Bombtrack Beyond 2. This powers a Supernova E3 Pure 3 front light and a Supernova E3 Tail Light 2 at the rear. The front puts out what seems like a limited 205 lumens, but it's a nice white light. Though I'd probably back this up with a brighter light for unlit routes, this was fine for urban and suburban riding under street lighting.

Unless you actually disconnect the cables, the lights run whenever you're pedalling. Still, as I always run with front and rear lights even during daylight, I've no problem with this. And unlike the old rim- or tyre-driven dynamos of my early cycling years, these don't stop working when the first drop bit of rain reduces friction to zero. The rear light also stays lit for a while after you stop pedalling, so you're not rendered invisible when you stop at a junction. 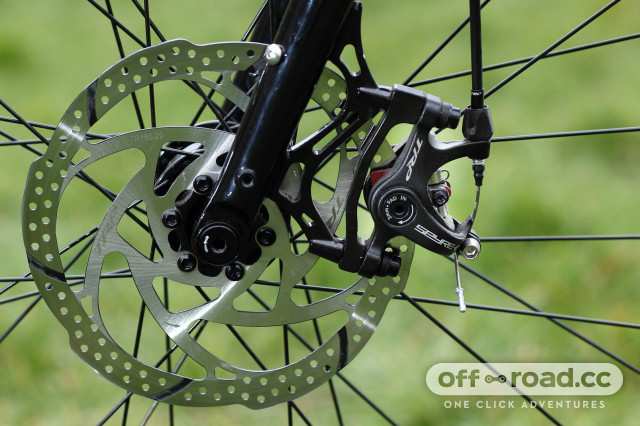 Both the front and rear lights are small, light and road legal in Germany. They come with a five-year guarantee, and the front light has a claimed lifespan of 100 years – 50,000 hours "if used normally on a daily basis". I'm pretty sure I'm not going to be around in 2121, and if I am, I reckon I'll probably be on an electric bike, but you get the idea.

The trade-off with a dynamo system is that you are powering it yourself. The Supernova's 3W output means you are expending an extra three Watts of energy – plus other friction within the system – to ride at the same speed as a non-dynamo setup. Did I ever notice this? No. While there's no such thing as free energy – Newton and Einstein would be turning in their graves if there was – I think this is a price worth paying. You could even consider it a little extra training…

Bombtrack Beyond 2 - how it rides 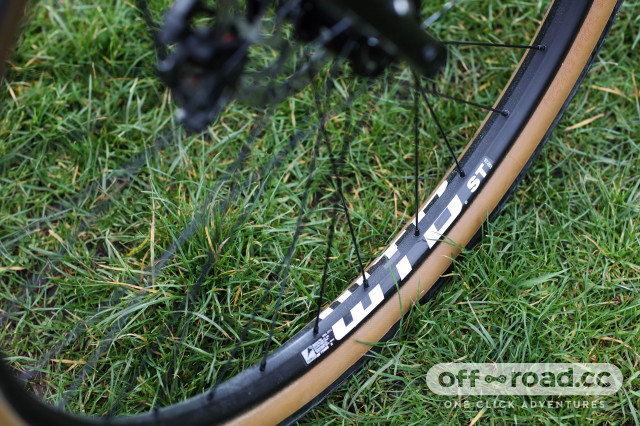 Well, you've got a compact steel frame, with a lot of exposed seat post, a steel fork and 50mm of rubber between you and the road. So, you'd expect a decent amount of comfort from Bombtrack Beyond 2 – and you'd not be disappointed. Day-long rides are carried out in complete comfort, but this Bombtrack has a few strings to its bow beyond tackling the tarmac.

One look at its super-wide handlebar and matching tyres suggest that this bike will be at home on surfaces that are much less smooth, which the Beyond 2 is. The handlebar measures a road bike-like 42cm from centre to centre at the lever hoods before flaring out to a mighty 62cm at the bottom of the drops, which is a 30-degree flare. 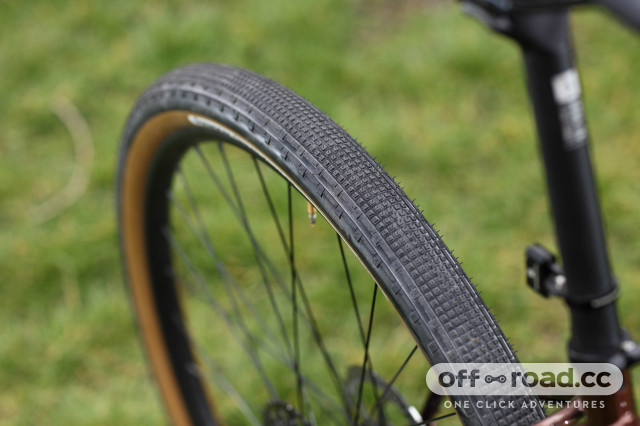 Staying reasonably compact and aero, you can get into a reasonable tuck on the hoods or in the drops without spreading your arms too wide (to a degree, anyway). And while I'd have liked slightly flattened, swept-back tops – my favourite handlebar profile – the Bombtrack bar comes into its own when the going gets rough, offering great control over poorer, broken riding surfaces.

Kerbs and most potholes are no obstacle. Towpath, loose grit, chunkier gravel and not-too-gnarly singletrack – I don't do seriously gnarly off-road riding – also came and went without issue. Suppose you were touring in parts of the Far East, or in my experience, off the beaten track in parts of Australia and New Zealand. In that case, tarmac can disappear when you're least expecting it, which is when a bike like the Beyond 2 lives up to its name.

I would have liked a lower gear for climbing (I often want a lower bailout gear, so that's not unusual), but this bike is confident and controlled on descents. 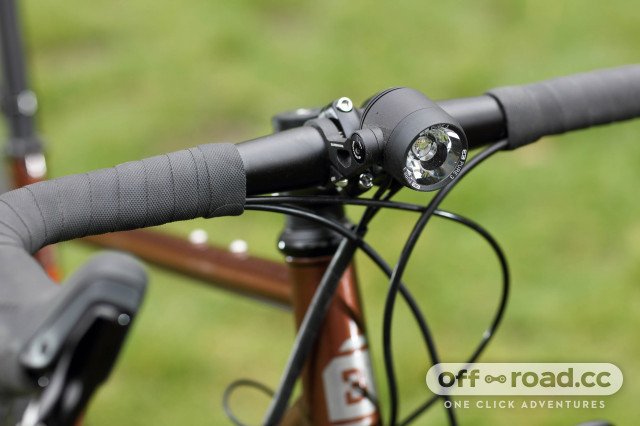 It's hard to make direct comparisons as adventure-cum-touring-cum-gravel-cum-bikepacking bikes vary so enormously. However, I'd still say the Beyond 2 feels a little expensive for a bike with mechanical disc brakes.

For example, you get hydraulic brakes on Ragley's £1,699 steel Trig, Specialized's £1,900 aluminium Diverge E5 Elite and Giant's flat-barred Toughroad SLR 1 aluminium touring bike, which is nearly £1,000 cheaper than the Beyond 2 (recently reviewed on road.cc). 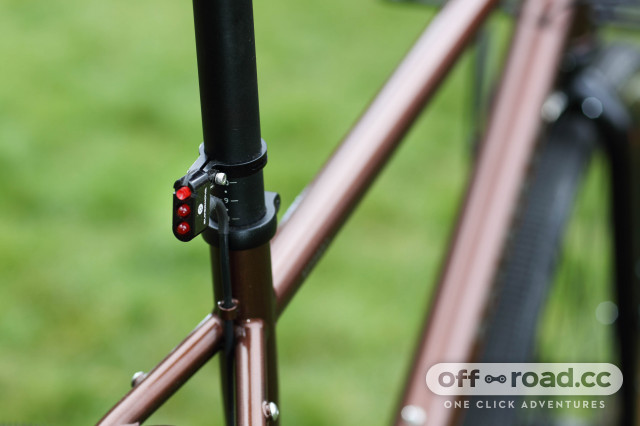 So hydraulic brakes don't seem an unreasonable expectation for the £2,250 price tag. The Giant also comes with both front and rear racks.

And if you compare the Beyond 2 with bikes that have steel frames and mechanical disc brakes, the Bombtrack also slips up on value. For instance, Genesis' Chromoly Tour de Fer 30 costs £2,099, and not only does it also have dynamo lighting, but the Genesis also comes with full-length mudguards and front and rear racks. 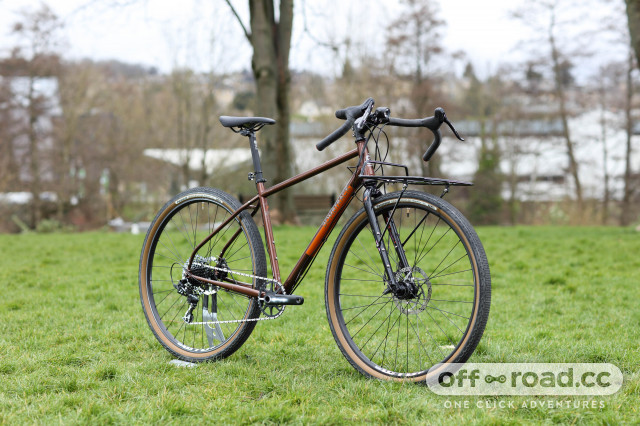 I hugely enjoyed my time on Bombtrack's Beyond 2 on both long, leisurely rides and slightly more challenging rides over varied surfaces, a few miles of canal towpath here, some moderate singletrack there and a diversion to Salisbury Plain's gravel, and it proved a great companion for all of them. It's versatile, has bags of long-distance comfort, and it looks great. My only real criticism is that considering the Beyond 2's pretty hefty £2,250 price tag, I'd like to have seen hydraulic disc brakes and a rear rack as standard.