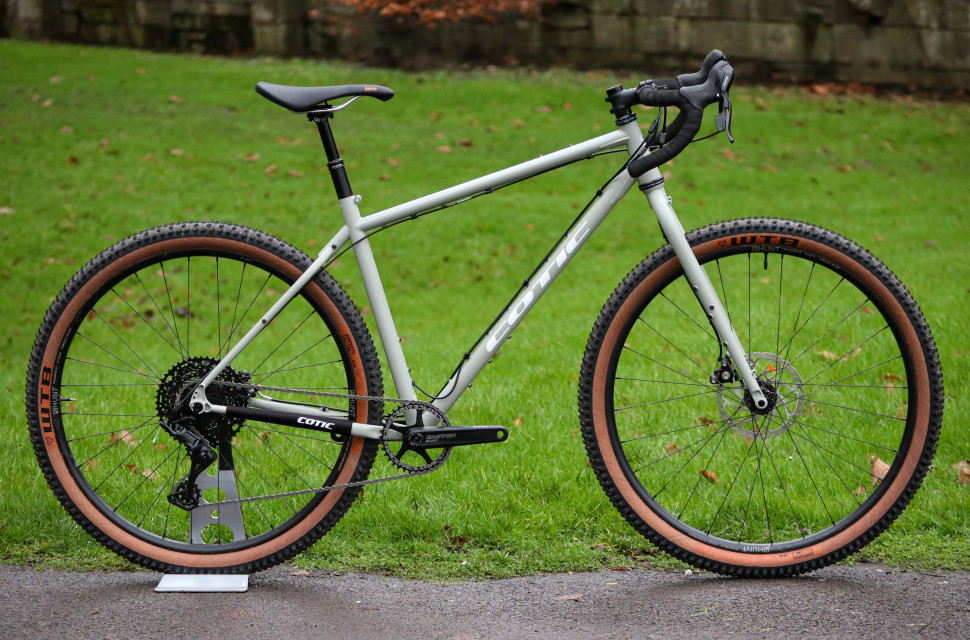 Cotic's new steel Cascade is a tough and versatile adventure bike. It's happy to charge around your local woods, explore bridleways, and head out on multi-day off-road rides in the wilderness. With the ability to equip huge tyres and a dropper seatpost while possessing a geometry based around a long fork, the Cascade clearly has a mountain bike heritage, making it extremely capable when the trails get challenging.

The first thing you notice when you climb aboard the Cascade is just how confident and stable it feels. Much of that is down to the mountain bike-inspired geometry: a slack head tube angle (69° on my large-sized review bike), long wheelbase, and short stem (I'll come back to the geometry in a bit). Couple that with wide tyres that can roll through and over pretty much anything that comes their way, and you get a bike that exudes cool-headed self-assurance. This is the most stable and easily controlled adventure/gravel bike I've ever ridden.

One quick illustration of the stability is just how easy it is to ride no hands on this bike. The Cascade just wants to hold its line. That's definitely a positive characteristic when rocks, stones, roots and holes are constantly trying their best to push you around and knock you off-kilter. 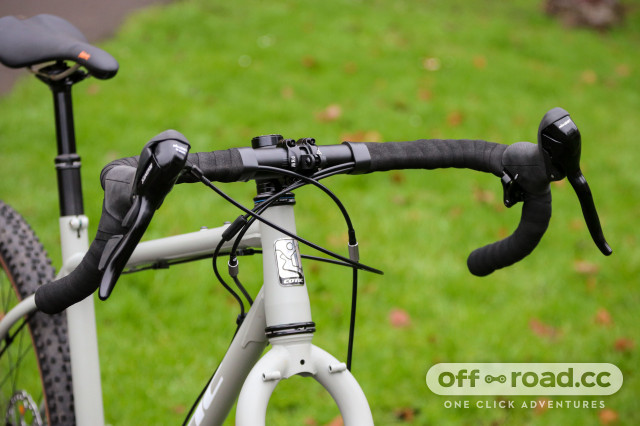 I've been riding the Cascade mostly on tracks and byways of Salisbury Plain, where you can be confident that whatever's going on beneath your tyres can change at any given moment. You'll go from a well surfaced gravel road to potholes as far as the eye can see, then to a squishy muddy bit, and so on. You get the picture…

The Cascade isn't fazed by any of this, staying calm whatever comes its way. You roll through holes that would fling some other bikes off at strange angles, and if you accidentally hit something bigger and/or sharper than anticipated, the chances are that it's not going to be a huge deal. Stuff that you'd typically avoid seems less of an issue all of a sudden.

The result is that I found myself laying off what you might call defensive braking – you know, the braking you do just in case one of those holes ahead of you turns out to be a big 'un. I'm not saying the Cascade allows you to ride like a complete loon, but you can afford to be a bit less cautious than usual because of the stability, along with the extra confidence you get from the chunky tyres. You can hang on to speed just that little longer on technical descents and on bumpy, rooty, and rock-strewn flat sections. 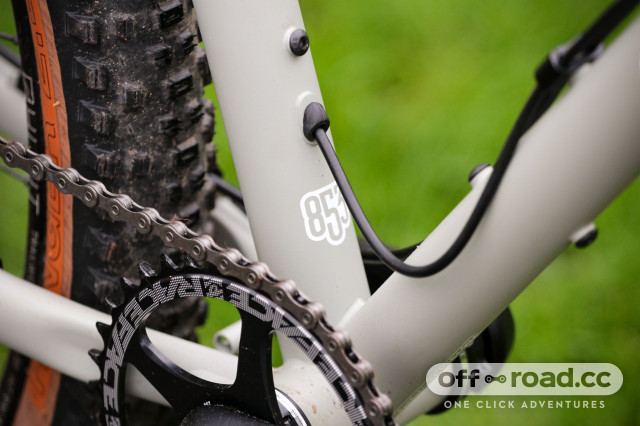 Weighing in at 12.62kg (for our large-sized model), the Cascade isn't particularly fast out of the blocks, but that's clearly not high on this bike's list of priorities. It is, though, a pretty versatile offering. The Cascade is enthusiastic if you want to tear around your local tracks and trails for a few hours. Fancy chucking in a bit of singletrack and the occasional drop? All good.

The Cascade is equally well suited to carrying loads and taking you long distances in comfort. It has bosses everywhere – they're all over the place – so you can fit racks, mudguards, bottle cages (lots of them), top tube bags, frame packs… The Cascade's stability is a real advantage when you have it loaded up too, and the lengthy chainstays mean you're less likely to clip a heel if you fit traditional style panniers at the rear. 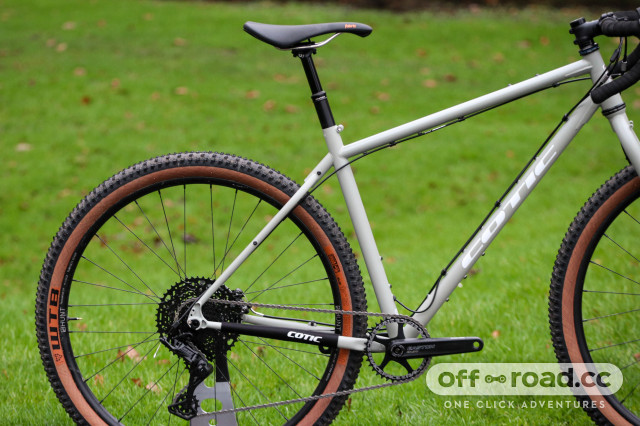 We've gotten this far without a whole lot of information about the frameset so let's rectify that. The Cascade boasts a Reynolds 853 steel mainframe with a 4130 cromo rear end. The gear cables and brake hoses run externally, quite close to the tyre at the top of the seatstay, but you can rejig that. There are gussets on the underside of the top and down tubes where they meet the tapered (EC34/EC44) head tube. 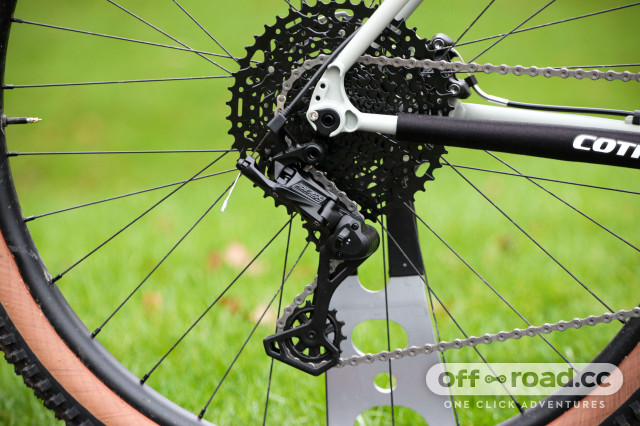 The Cascade has mountain bike Boost spacing (148x12 axle) at the rear and 110x15 at the front and is designed for 1x (single chainring) drivetrains.

Our review bike is fitted with a bespoke Cotic Alpaca heat treated cromoly 483mm rigid fork. Cotic has designed the Cascade around such a long fork so that you can swap to something like a RockShox SID SL Ultimate – with 100mm of travel – without messing up the geometry. 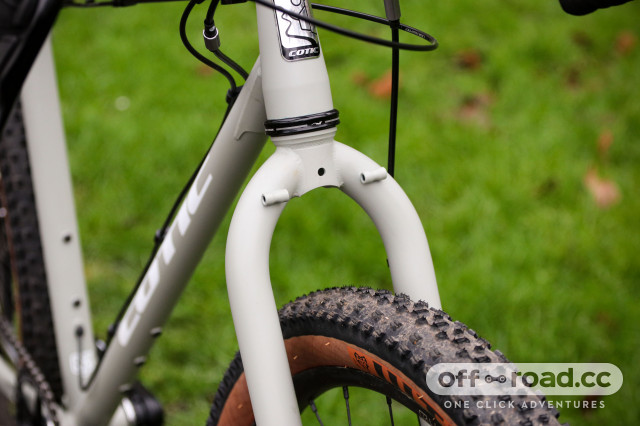 Speaking of such things, the Cascade is built to what Cotic calls its Sureshot geometry, a development of its Longshot mountain bike geometry but for drop bars. This means that frames are long, intended for use with short 50-70mm stems. We've seen many other brands follow similar mountain bike-inspired principles when developing their gravel/adventure bikes, hoping to provide plenty of off-road stability with sharp handling when required.

The Cascade comes in four sizes, from small to XL. The seat tube angle is 74° across the board, while the head tube angle is much slacker at 68° or 69°, depending on the frame size. 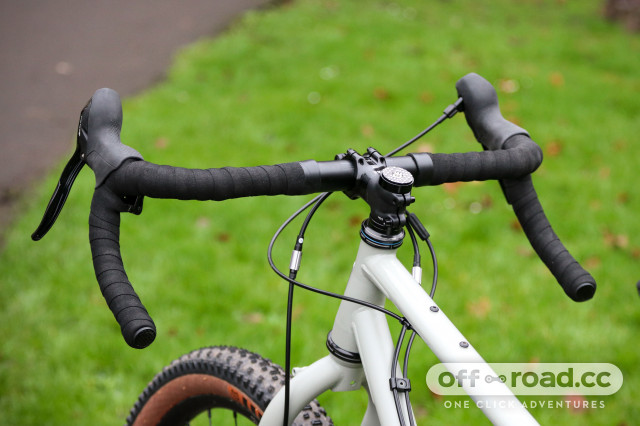 The large-sized Cascade that I've been riding has a 613mm effective top tube and a dinky 126mm head tube. With a 633mm stack and a 432mm reach, plus a short stem (Cotic advises 60-70mm) with a slight rise, the handlebars are positioned higher and closer to the saddle than on many bikes of this ilk.

Get down on the drops of Cotic's Valley flared handlebar, and you can find yourself an efficient ride position that's in no way extreme. This is the sort of setup that most people could handle for long stints without the need to be cracked back into shape by a chiropractor at the end of it. That will be especially welcome if you're riding for a couple of days – or longer – when an achy neck and back can really spoil your fun. 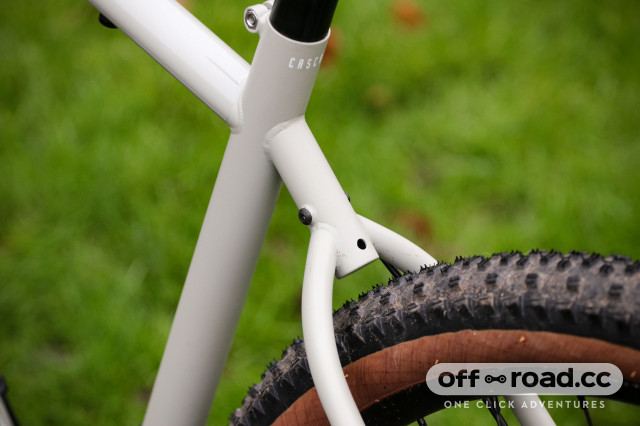 Our bike was fitted with Hunt Trail Wide wheels, featuring 6069 T6 aluminium rims with an internal width of 30mm and tubeless WTB Ranger 2.4" tyres. These provide good traction in a variety of off-road conditions, the close-spaced centre knobs only getting clogged in really claggy mud. The flip side is that these aren't quick on asphalt when you're on the way to or from the tracks and trails or linking up different sections. You can't have everything. 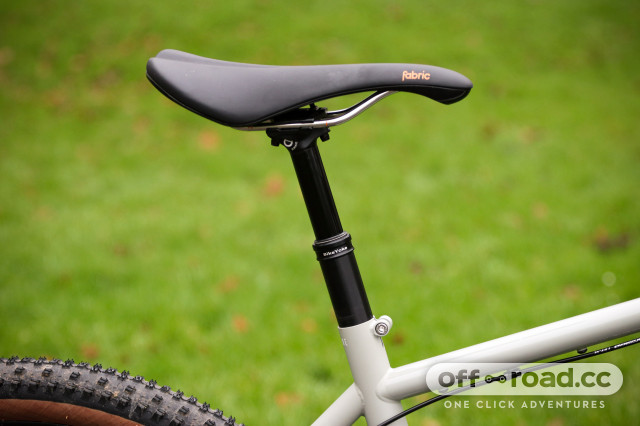 One other feature that tells you where Cotic is coming from with this bike is the seat tube that's built to take a 31.6mm diameter dropper post with a cable that routes internally from just north of the bottom bracket. Our review bike came fitted with a Bike Yoke Divine dropper post, although it's not standard on this build. I found it easy enough to operate from both the hoods and drops, although people with smaller hands might not be as lucky. 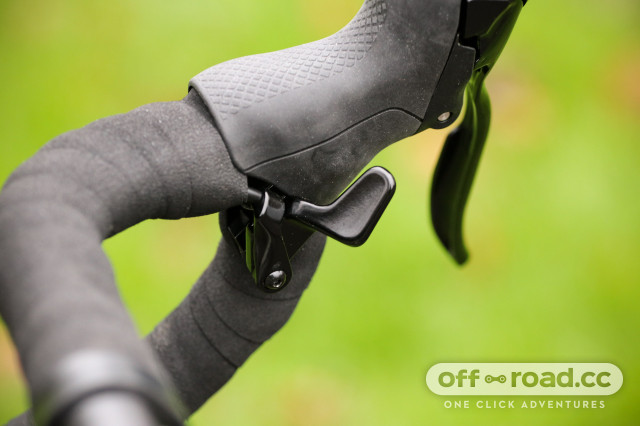 Do you need a dropper post on a gravel bike? Nah, of course not, but the scarier the descents you tackle, the more likely you will become a fan. Rather than nervously skittering down technical off-road descents with your saddle perilously high, you can lower your centre of gravity and plough through it faster and more confidently. On a bike like the Cascade, it's at least worth considering.

Our review bike was built up with a Microshift Advent X 10-speed shifter, rear derailleur and 11-48T cassette with a 36T Raceface chainring and Easton EA 90 cranks. With the 2.4" tyres fitted, this gives a gear range of 21.0" to 95.8". Even when fully laden, that low gear should get you up most off-road climbs. 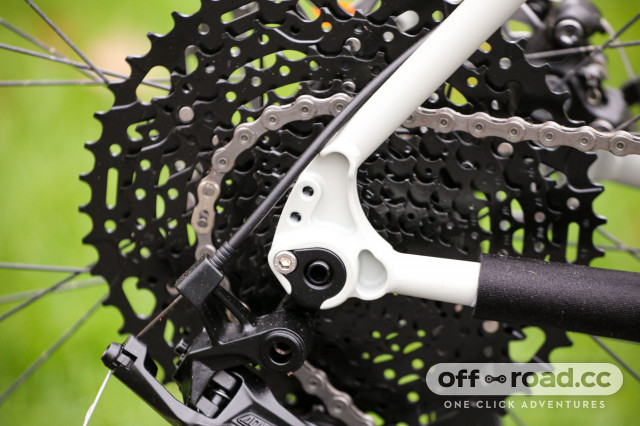 If you wanted even lower gearing, the Microshift Advent X rear derailleur isn't designed to take a sprocket larger than 48T, but you could go for a smaller chainring. Of course, you'd spin out sooner when riding fast.

The rear derailleur has a ratchet and pawl clutch to help with chain retention over bumpy ground. You can turn it on and off via a switch and also adjust the clutch tension with simple tools. The chain didn't come off once in several weeks of almost daily use. 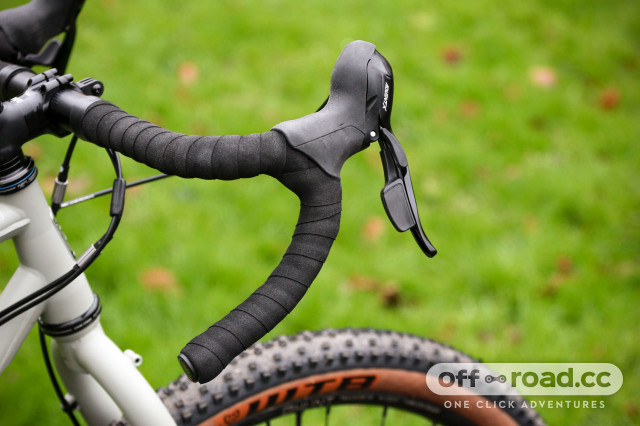 It might take a while to get used to Microshift's method of shifting – you have two levers behind the brake lever, one for upshifts and the other for downshifts – but it functioned fine throughout the review period, especially considering its low price.

Shimano's mechanical (cable operated) disc brakes are a concession to price. Some people would have you believe that mechanical disc brakes are the devil's work, but these stopped me fine. Rotor rub can be an issue, though. You'd almost certainly prefer hydraulic brakes, but they'll cost more. 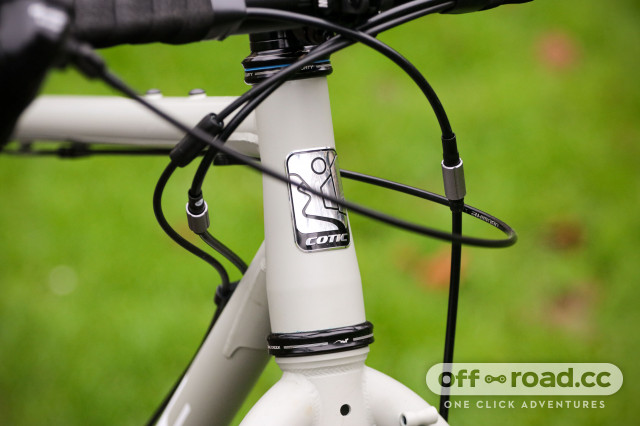 Speaking of price, you're looking at £849 for the Cascade frame with Cotic's steel Alpaca fork. Complete bikes start at £2,099. This is for Cotic's Bronze build with the Microshift shifting and mechanical disc brakes. This is the build I was using, although you don't get the dropper seatpost at this price.

Cotic certainly isn't giving the Cascade away, and I must say that I'd have liked to see hydraulic brakes and, although Microshift Advent X is functional, a groupset from Shimano or SRAM.

You can have these components fitted, but you need to pay more. A Gold build with Shimano GRX/Easton components is priced at £2,699. In contrast, a Silver build featuring SRAM Apex 1 components will be available later in the year.

Cotic says it will also offer rolling chassis kits for people wanting to move parts over from older bikes.

Overall, the Cotic Cascade is a really enjoyable bike with a confident feel. This isn't a low and stretched road bike in disguise; with huge tyre clearance and the ability to take a dropper post, it's more like a rigid mountain bike with a curly handlebar, and that's not a bad thing. It's got loads to offer whether you want to hoon around the local woods, get some miles under your belt on a Sunday morning, or head for the hills on an overnighter (or longer). If you like to keep your options open, this is a versatile choice and a whole lot of fun.

It's just a mountain bike with drop bars; someone had to try this and see if there's a market for it.

Assuming the Small is actually more like a 52?  So not really that small for small riders like me.  Otherwise I quite like everything about it, but would be great if manufacturers would remember not everyone is over 165cm!

Very neat looking bike. Agreed, it's really like sticking drop bars on a modern hardtail. Good to see but not entirely sure it doesn't fall in the middle of two schools and deliver for neither use case.