Skip to main content
Log In Register
Lighter than regular Levo, is this the future of e-bikes? 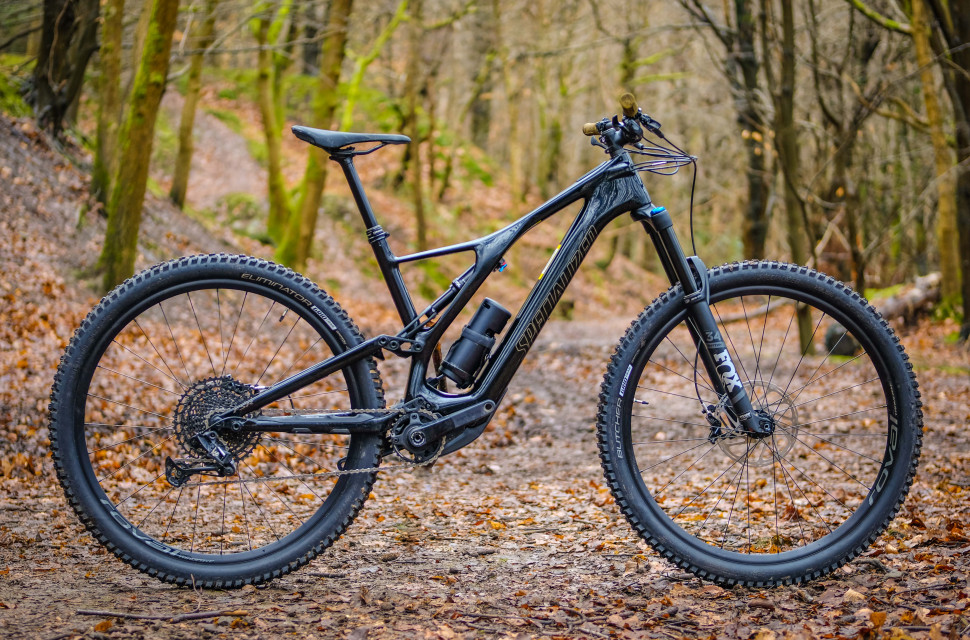 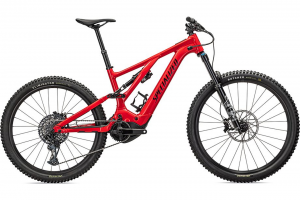 Specialized has launched it's latest e-bike, the Turbo Levo SL a lightweight addition to their line of Turbo electric mountain bikes. This latest e-bike is seriously impressive with a small motor, a neatly integrated battery and a natural feel to the powered assistance. Is this the future of e-MTBs?

Given the same name as its bigger brother, the Levo, it could be lost in translation that this is the new Levo but it’s not; it’s a very different beast. Levo SL is one of a breed of lighter e-bikes a category which, until now, only Lapierre has really made tracks with their EZesty. That bike which uses a Fazua motor and a 250Wh battery to give a slimline electric mountain bike.

Specialized being the powerhouse that it is made their own motor from the ground up for their latest e-road bike, the Creo and its this same motor, designed in conjunction with Mahle - the Specialized SL 1.1 - that is in the Levo SL. 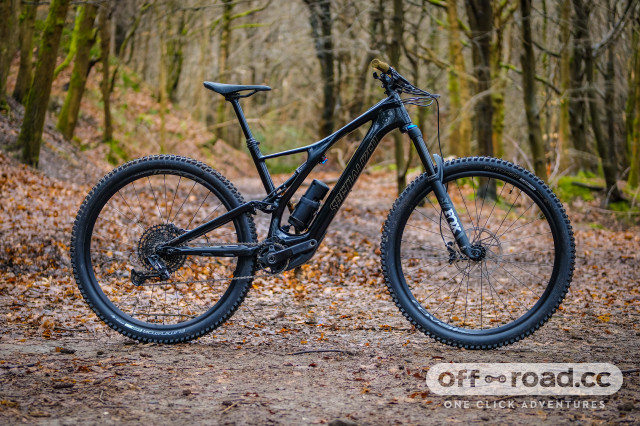 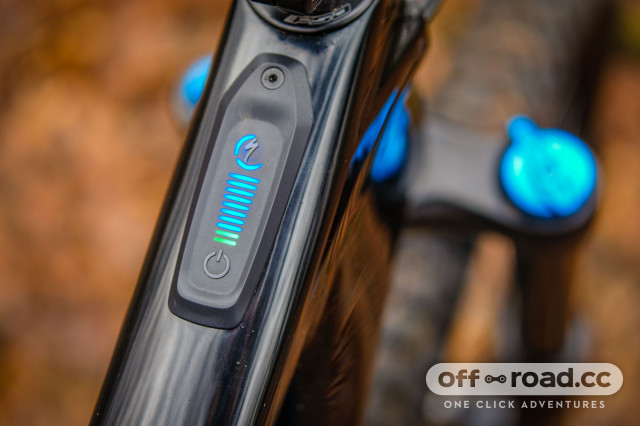 In a nutshell, the Levo SL is an 18kg e-bike with 150mm of travel, 29er wheels and the Specialized FSR suspension linkage and comes in either alloy or carbon at a range of price points. The Levo SL gets a 360wh battery and 240watt motor which together produce a much more natural feel to the assistance. The geometry on the Levo SL is pretty much identical to the Levo but with shorter chainstays, something made possible by the smaller motor package.

This Large sized Levo SL gets a 455mm reach, a 66° head angle, a 74.7° seat angle, 437mm chainstays and a wheelbase of 1217mm. It’s like the older Levo, but that bike gets 455mm chainstays which, along with its weight will radically change the ride. It’s clear that Specialized really want to replicate the riding experience our ‘normal’ bikes here with the Levo SL but just adding a touch of power. 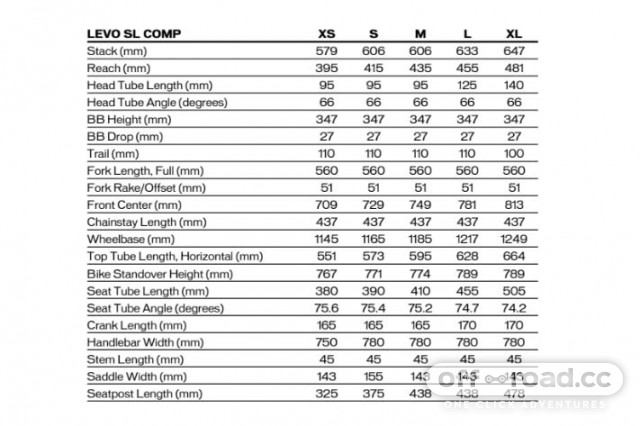 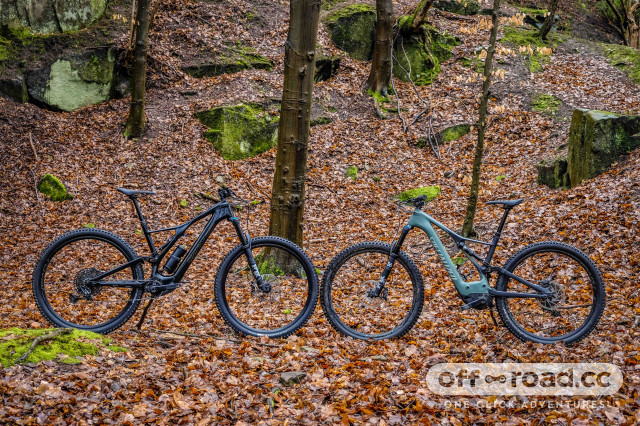 Specialized Levo SL on the left, Turbo Levo on the right

The regular Levo Carbon Expert weighs in at 22kg that’s for a large-sized bike, whereas The Levo SL, we have here is a lower Comp spec bike but with actually a very similar spec, the lighter fork aside weighs 18.2kg. This Levo SL Carbon Comp bike retails at six grand. For that, you get a  Fox 34  Rhythm fork, a Fox Float DPS Performance shock, SRAM NX Eagle, Guide R brakes, X-fusion manic 150mm dropper, alloy Roval wheels, a Butcher Grid Trail up front and Eliminator Grid Trail on the rear. Grid Trail is a new casing from the Big S that sits somewhere between Grid and their tougher BLK DMND casing that you’ll find on the Levo’s. 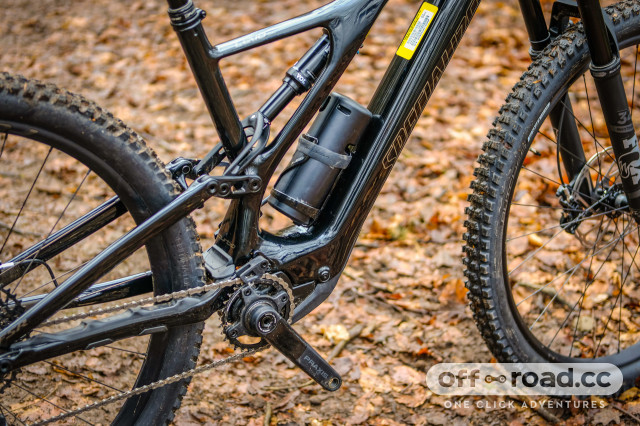 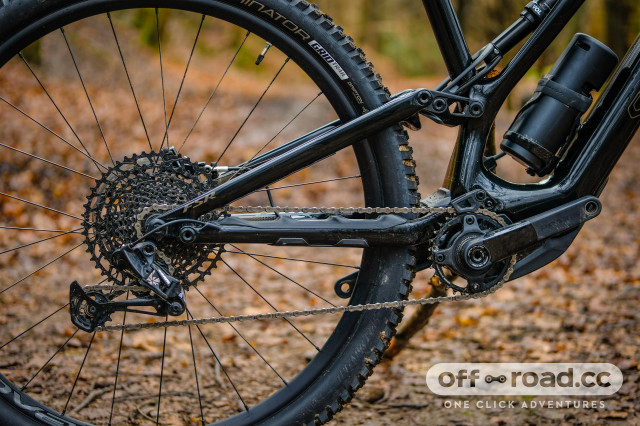 If you want to spend less, there is a similarly specced alloy comp for five grand. If you want to spend more then you can buy a Levo SL carbon Expert for seven thousand five hundred quid or better still, the s-works version with Fox Factory suspension, SRAM XX1 Eagle, G2 Ultimate brakes, an AXS dropper post and carbon wheels for the small sum of 11 grand. 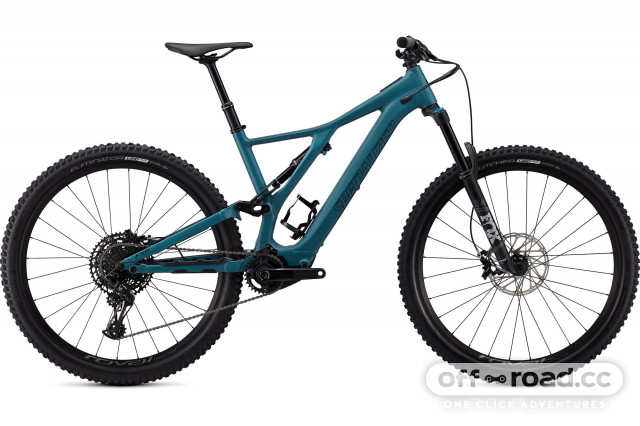 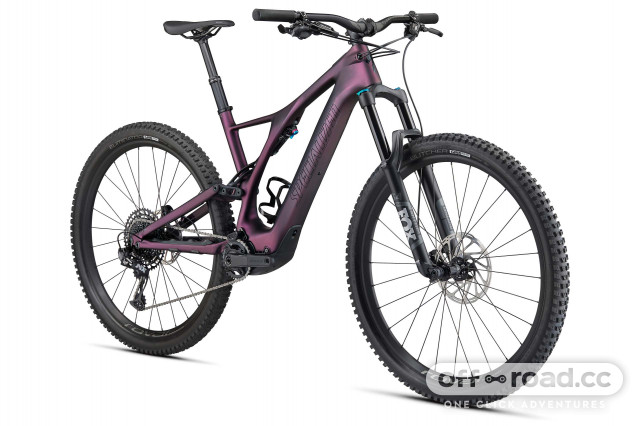 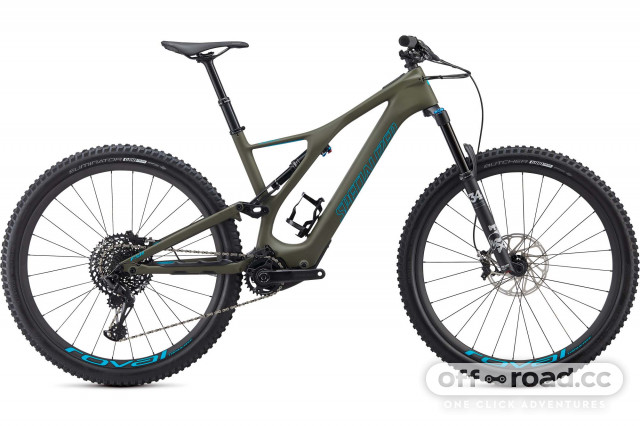 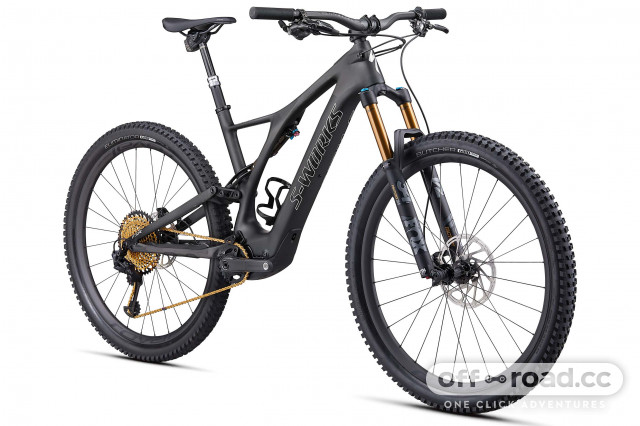 Other differences you’ll see on the new Levo SL are that range extender, the bottle shaped battery weighs a kilo and slots into the bottle cage plugging into the charging port giving you about another two hours of ride time. If you buy an S-Works bike you’ll get a range extender included, otherwise, it’ll cost you £300 to buy one. You also can’t remove the battery from the Levo SL for charging as you can with the Levo. Spesh say this helped enable them to make the package lighter, it, however, means that you will need to be able to charge the bike in situ in your shed, garage or batcave. 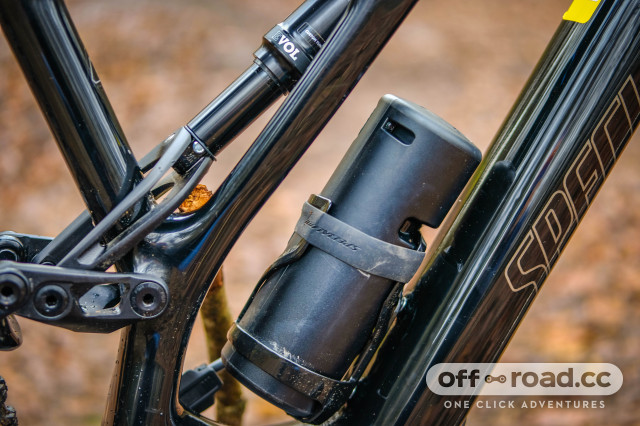 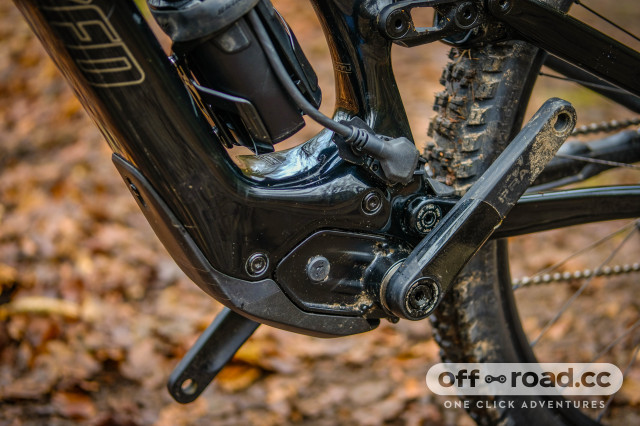 There are similarities between the bikes too, these lie in the controls of the Levo SL and Levo, the bar remote and battery indicators are identical and you also still get walk mode on the new bikes too. The Mission Control app stays as well, which if you don’t already know is a unique feature allowing the rider to set power levels, manage battery power with regards to the total ride time and distance from your smartphone. For example, when I ride a Levo and want to do a big day, I drop the power assistance of eco to 15%, prolonging battery life and extending my ride. 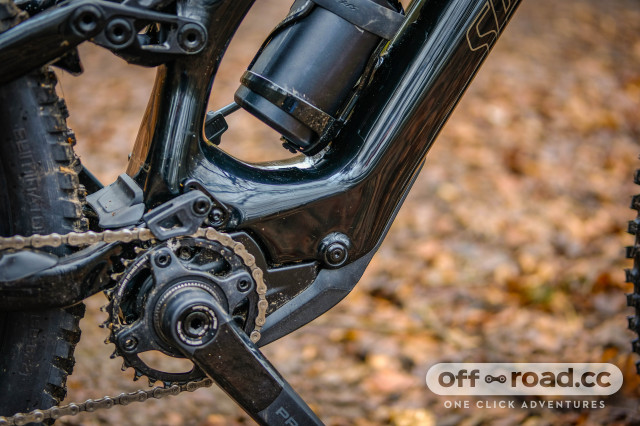 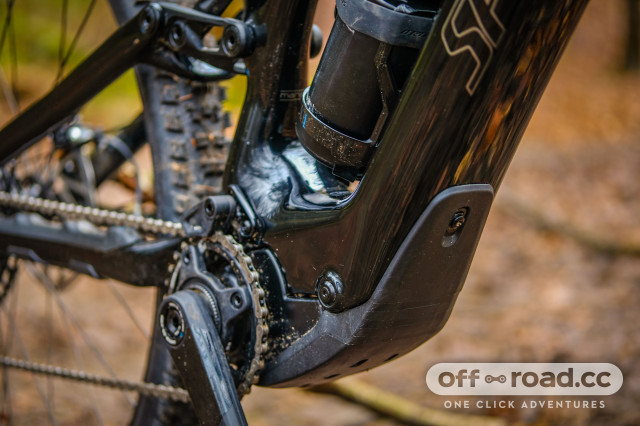 In terms of the ride, the two are drastically different! I’m a huge fan of e-bikes and as heavy as they are, once you adjust your riding to be more purposeful with the bike its an easy thing to get used to and I’ll ride anything on an e-bike that I’d ride my normal bike on. I’ve had just one ride on the Levo SL (after many on the Levo) with the new bike feeling much more nimble from the off, there’s no feeling of dead weight as there is in a ‘normal’ e-bike. The power in intuitive, it’s not got the ‘kick up the arse’ feeling of the Levo, it’s a more subtle aid for the legs. It’s smooth, quiet and it was easy to muse upon that fact that this one day could be the new norm for bikes. Riding in eco mode feels like you are pedalling a normal bike the motor making up for the weight, but with the added knowledge that should things get steep and tough uphill you can turn the bike up a notch and get move on much quicker. 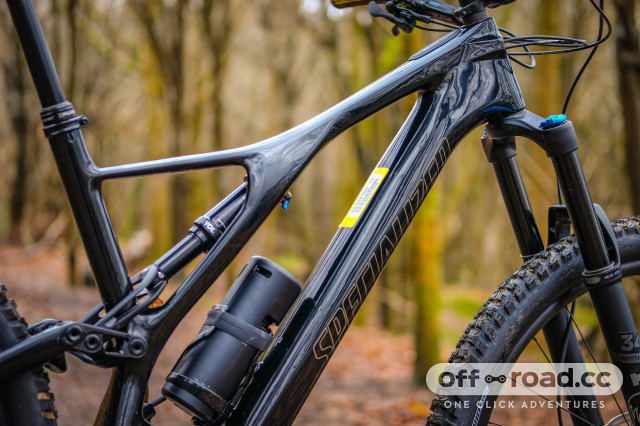 When descending the bike didn’t try to steam roller down the hill as the Levo sometimes does, it’s easier to flick about the trail and forgetting that you have a motor you feel that you could just be on a slightly heavier bike, not a bad thing where descending is concerned. 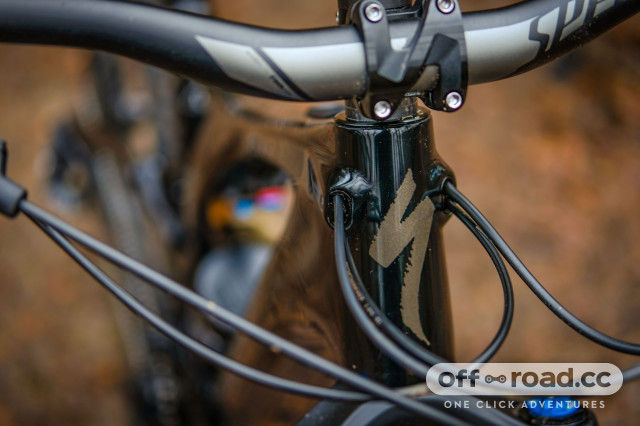 Although then range of the bike and battery will be shorter and smaller than the Levo, the Levo SL did remarkably well in its first outing. I rode in all three modes, eco, trail and turbo (mostly the last two) and managed 850m of climbing in 2 hours with three bars of battery still left and that’s without the addition of the range extender. Remember that although the battery is smaller and the motor less powerful the bike weighs less too, making what it does have, go further than you at first think it might. 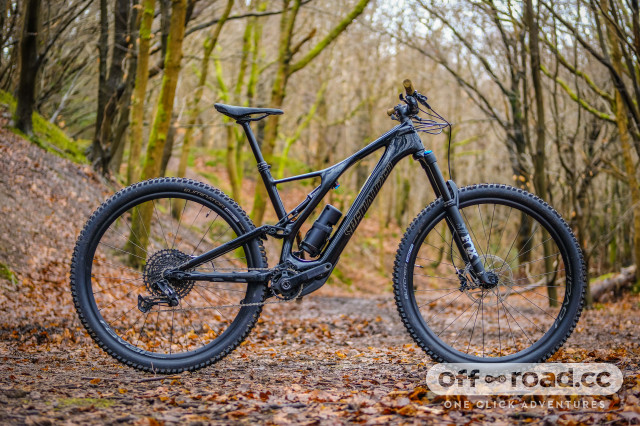 The bikes give a completely different experience to each other and I think that lighter bikes with a little less assistance might just be what the majority of riders are looking for, especially those that are already riders, with an active lifestyle who are looking for a “ride extender” rather than a bike to make climbing easier.

It’s an exciting time in the e-bike world at the moment, especially as the Levo SL joins the furore, for me it throws up so many questions, most predominantly - "is this the future of e-bikes?"  I'll be reviewing this bike in full on off-road.cc and ebiketips soon, so check back for that in the near future. 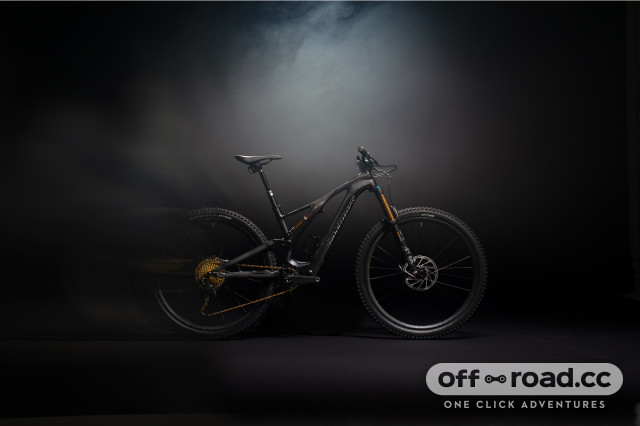