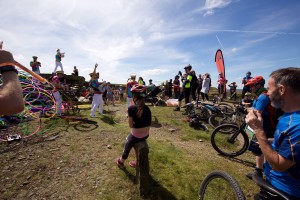 The GT Malverns Classic bike festival, due to be held this weekend, has been cancelled due to too much rainfall making the site unsafe, the organisers have announced on Instagram.

In a video on Instagram, organiser Si Paton says: "We've met with the landowners, we've met with the safety people, the weather has got the better of us. It absolutely poured down again last night, wasn't expecting as much as there was.

However, all ticket holders have been promised a full refund and the event promises to return in next year, Si saying "Wait for the communications, spread the word but we are going to be back, bigger and better and we're not going to let the weather beat us in 2020."

"We are now processing refunds for everyone as a matter of urgency. Everyone that purchased a festival ticket via the Ticketseller.co.uk can start to expect a refund over the next few days. This will be for; spectator, parking, demo, MBUK Goody Bag, e-bike, carbon foot print and enduro. There will also be an option to transfer your entry to next years event.

"Everyone that purchased a ticket via British Cycling; Dual, Quad, DH and XC will receive a refund over the next two days."

Originally held during the 1990s, the Malverns Classic became a yearly staple of the burgeoning mountain bike scene in the UK  before events, including a fatal stabbing in 1995, brought the event to an end in 1998. Si Paton resurrected the event in 2018 with a mixture of racing, bike show and festival vibes to great acclaim, with this year set to be even bigger in numbers than before.

We'll update this story as when we have more details.

Stayer teams up with INGRID for gravel framsets
and that's not all, Stayer now offers the new GravAlloy wheelset
News

Five Ten Trailcross GTX shoe review £150.00
A sorted flat pedal waterproof shoe but not without a couple of niggles
News