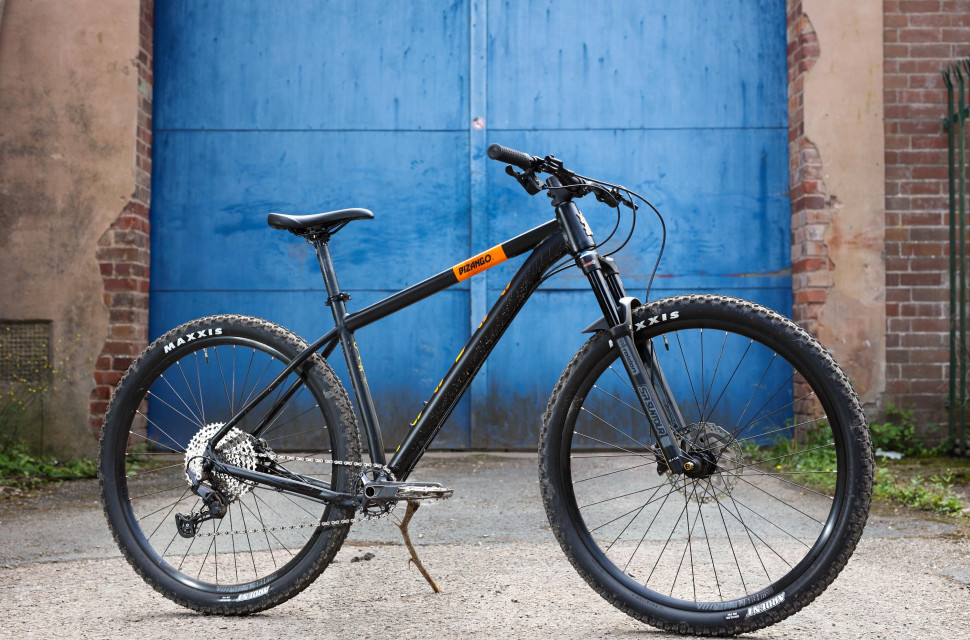 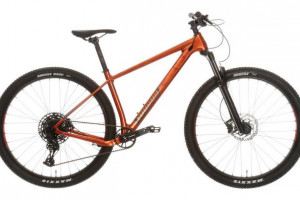 Many of Voodoo's bikes have won a plethora of awards and praise from both the cycling media and customers. Though none of those bikes have been as well-received as the brand's flagship bike, the Bizango and for 2022 it gets a brand new frame with a number of geometry tweaks. Read on to find out what the Bizango is all about, as well as some first impressions on the new bike's ride.

With the 2022 Bizango, Voodoo has taken the tried and tested approach. So rather than radically changing the frame to something relatively unrecognisable, the brand has just tweaked the geometry here and there to retain what we know and love about the Bizango but with the aim of making it a more capable bike.

With those geometry tweaks, Voodoo has strived to create a bike that's not only super playful when charging along those mellower trails but one that's also capable and composed when the trail steepens. 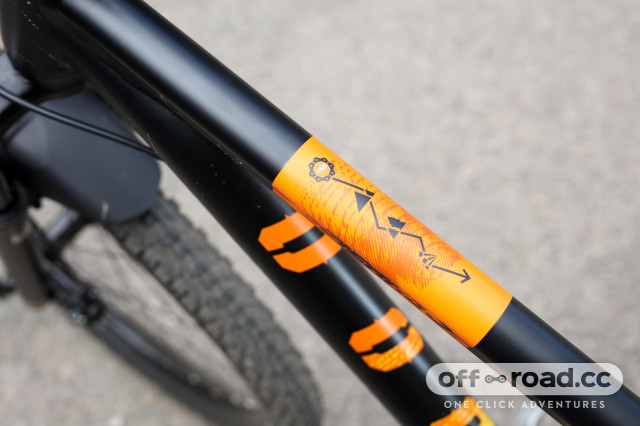 As such, the Bizango has had its reach stretched up to 461mm on the large frame we've got on test. The head angle has then been slackened a touch to 66.5° and you'll find a 74.5° seat tube angle here with a 435mm chainstay. Carried forward from last year, is its 29" hoops.

So just by looking at those numbers, we can see that the Bizango looks to be shaping up as a pretty well-rounded trail hardtail, but we'll see if the proof is in the pudding a little later on. That's because it'll be rude not to have a glance at the kit the Bizango comes with beforehand. 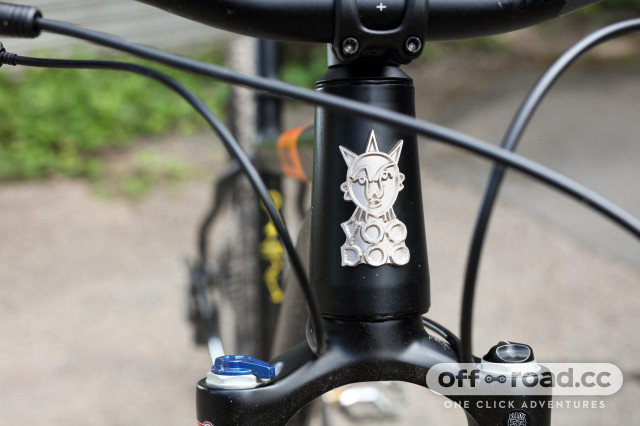 Starting off with that new frame, it's alloy only here but new for 2022, and probably the most obvious change is the move to a tapered head tube. Tapered head tubes are commonplace these days so you may not notice it as big a change as it is, but it'll hopefully add a whole load of stiffness to the front end.

Importantly, that new head tube allows for super easy fork upgrades, as it opens up a huge number of upgrade options should you want a burlier fork down the line.

The Bizango's accommodation for easy upgrades doesn't stop there, because the frame is routed for a stealth dropper post, although the bike doesn't come with one out of the box. Again, this is an incredibly thoughtful touch from Voodoo because it makes the upgrade super easy but it also means that you can make use of the vast variety of internally routed droppers out there, rather than potentially be limited by externally routed options. 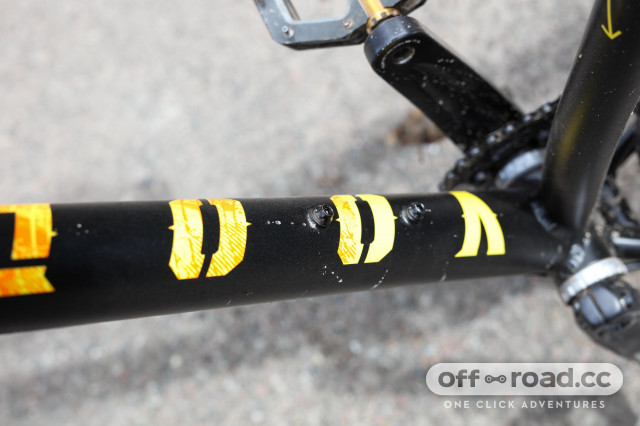 Along with that, the Bizango is kitted with a bottle cage in the front triangle and a threaded bottom bracket. Both of those get a big thumbs up from us British riders. 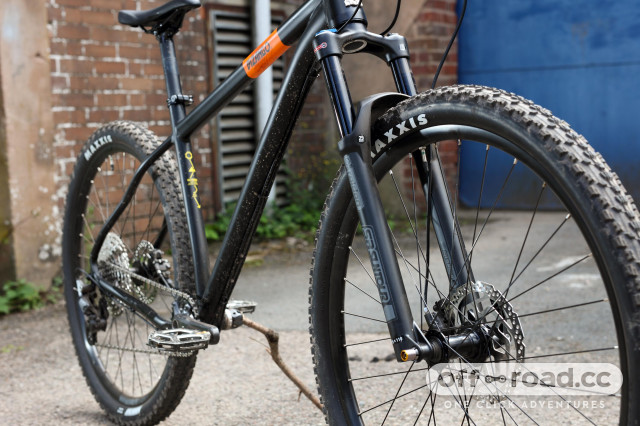 Moving onto the kit, there's an SR Suntour Raidon Air fork handling 120mm of travel and the bike's shifting is provided by Shimano with a 11-speed Deore drivetrain. The brakes also come from Shimano, having seen an upgrade from the previous model's Tektro brakes, and they come in the form of the MT200s. 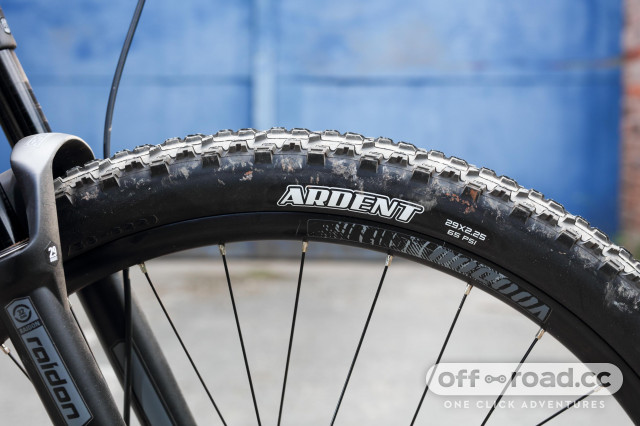 This bike rolls on a pair of Voodoo's own 29" wheels and they're sorted with a couple of 2.25" Maxxis Ardent tubeless-ready tyres. 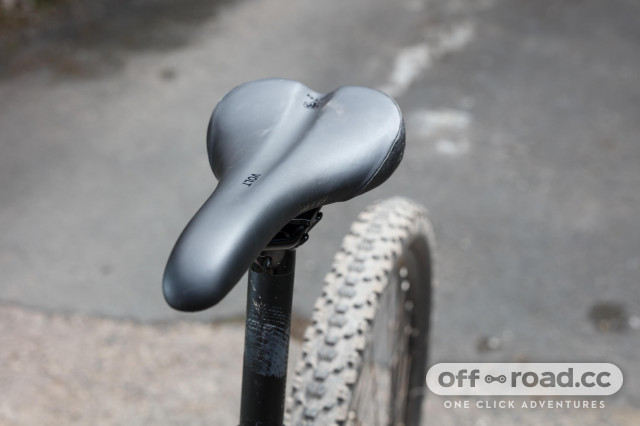 Finally, the finishing kit is supplied by Voodoo but there's a special custom saddle designed especially for this range of bikes and it comes from WTB. The WTB Volt we get here comes built with special gel inserts that should offer more comfort during those long days in the saddle. 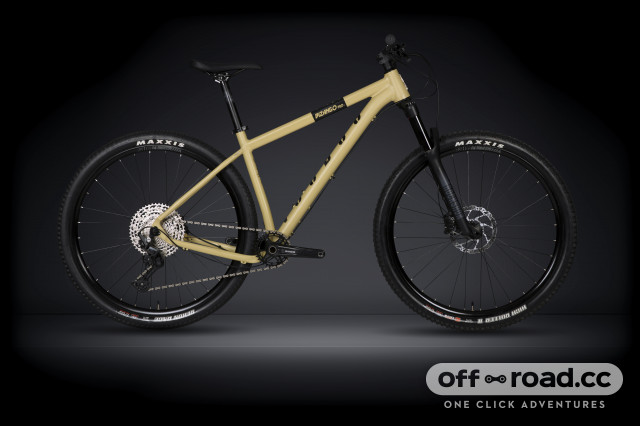 New for 2022, the Bizango comes with a bigger and burlier brother, aptly named the Bizango Pro. It's a bit more expensive, priced at £925 but it gets a bunch of upgrades with the aim of making it a bit more capable of rough and technical riding.

The fork on this one is the RockShox 35 Gold RL. It gets a bump in travel up to 130mm and as its name suggests, benefits from stiffer 35mm stanchions. The brakes here see a bit of an upgrade too, up to a pair of Shimano MT410s. Then there's a 2.3" Maxxis Highroller II at the front and a 2.25" Rekon at the rear. As for the rest of the spec, it matches the standard Bizango.

However, the Bizango Pro is the only bike in the new Voodoo lineup that is graced with a 12x148mm Boost thru-axle at the rear which should offer up a stiffer rear end. Each of the other bikes, including the standard Bizango, gets quick-release skewers.

Now we've got all of that out of the way, let's get on with the good stuff, here are my first impressions on the Bizango's ride. 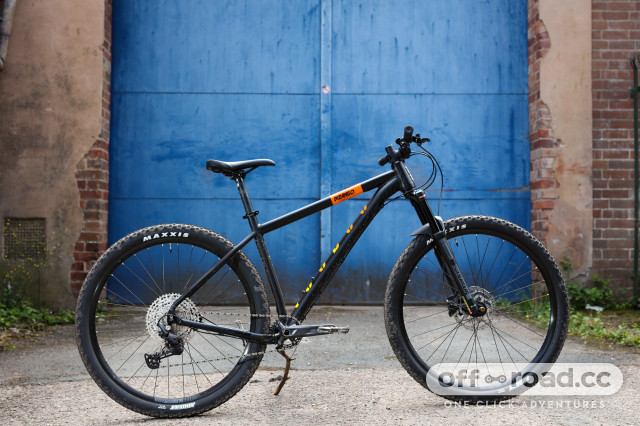 It's been quite a while since I've sat aboard a hardtail, let alone one under the £1k mark but my first ever proper mountain bike was a Voodoo Hoodoo, so I was pretty excited to see what the Bizango has in store.

Now, full disclaimer, I've only managed to squeeze in a couple of hours on the Bizango but I was very impressed with how quickly I got comfortable with it. It wasn't long at all until I was pushing harder into berms and chucking in an extra pedal stroke or two while smashing a trail I had never ridden before.

That's because of this bike's roomy but well-proportioned riding position. Its stretched reach, the 74.5° seat tube angle, and wide 780mm bars give you tonnes of space to move around over the bike. Because of that, it's really easy to modulate your weight around the bike which helps both on the ups and downs.

Straight away, that reach alone makes it a much more confident bike when compared to bikes like the pricier Specialized Rockhopper Expert 29 and Giant Talon 29 1 that have reaches around the 445mm mark. 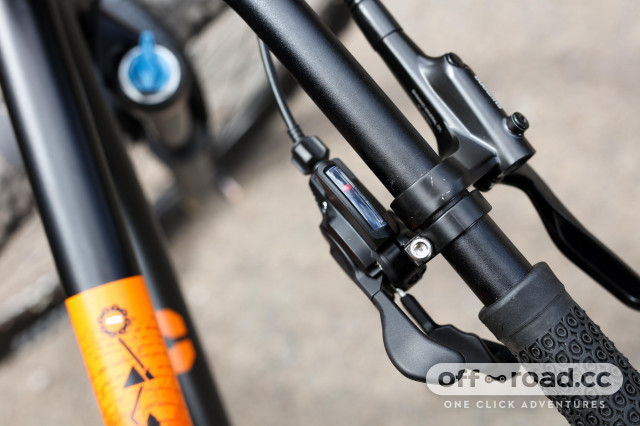 Though, if like me, you're used to slacker head angles, the 66.5° head tube on the Bizango takes a quick bit of learning. I found it easy over overweight the front end which made the handling nervous when carving through corners. However, it only took a little reminder that this isn't an enduro bike and a more central riding position to fix this. Then, you're able to take full advantage of the quick handling that the not-too-slack, not-too-steep head angle has to offer.

Once seated and putting power through the pedals, it's immediately obvious how efficient this bike is. I mean, it absolutely eats up the climbs and that's thanks to the fact the bike is a hardtail but also because of those low profile Maxxis Ardent tyres. 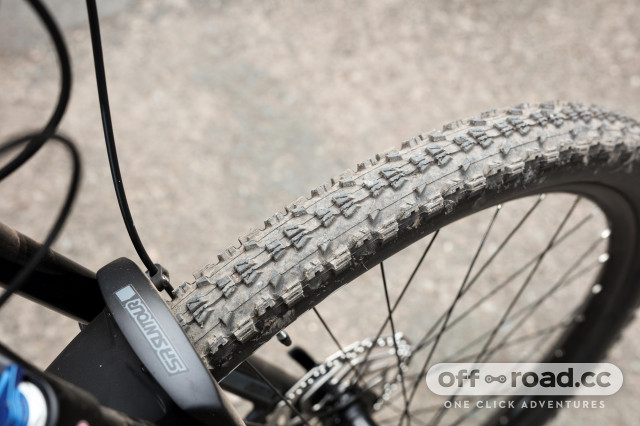 While they roll incredibly well, they also grip rather respectfully, especially on the hardpack of the Forest of Dean's Verderers trail that I rode this bike through. It was as if the tyres were made for that kind of terrain. Though, if you venture into loose gravel, or any looser terrain you may want to consider throwing a more aggressive tyre on the front. 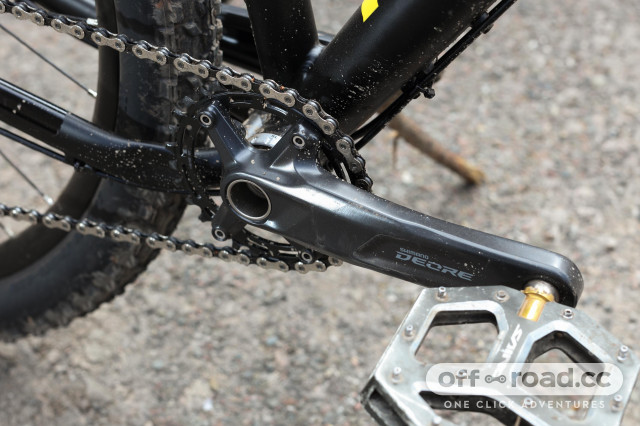 On the subject of climbing, as I said, the Bizango is pretty impressive and that's where the steeper head angle really makes sense. It makes super light work of tight switchbacks, tackling tricky corners with ease. Once you've mastered the corner, it's only a few light pedal strokes before you're up to speed for the next one.

The Bizango's performance downhill is almost as joyous as it is up. It's long enough to remain reasonably composed when the speed starts racking up and of course, you've got plenty of room to shift your weight about. 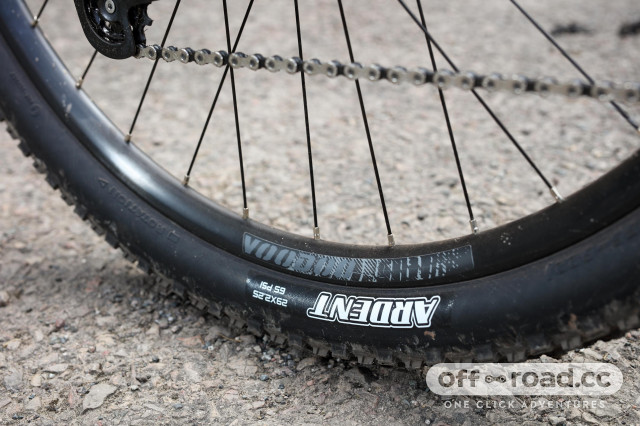 Those 29" wheels compliment the bike's spritely pedalling perfectly, as it's really quick to get up to speed, then once it is the bike maintains momentum excellently. However, once you've hit warp speed, I've found the head angle a little limiting (even once well acquainted), especially once the trail steepens. Its quick steering at slow speeds remains pretty quick when you're hammering it so it does get a little bit nervous. Although, it won't hold me back over flowy trails.

As for the componentry, for the cash, there's incredibly little to complain about. I'm a fan of the SR Suntour fork over comparative offerings from bigger brands as for the most part it's reasonably well damped. However, over really rough stuff it does struggle a little and it makes the whole bike feel pretty lairy. Like I said before, I've not spent too much time on the bike, so I've not fettled with the fork as much as I would like so that could very well change in the coming weeks.

Already, the Bizango has made quite the impression. It's a monster on the climbs and descends with a very respectable level of prowess, combined with great performing componentry for a relatively meagre asking price. So it seems that Voodoo may have it the nail on the head in creating a nicely balanced bike. Though, these are just my first impressions after a couple of hours on the bike. So keep an eye on the site for the full review coming in a few weeks. Potential customers can claim their interest in buying any of the new Voodoo bikes from today.