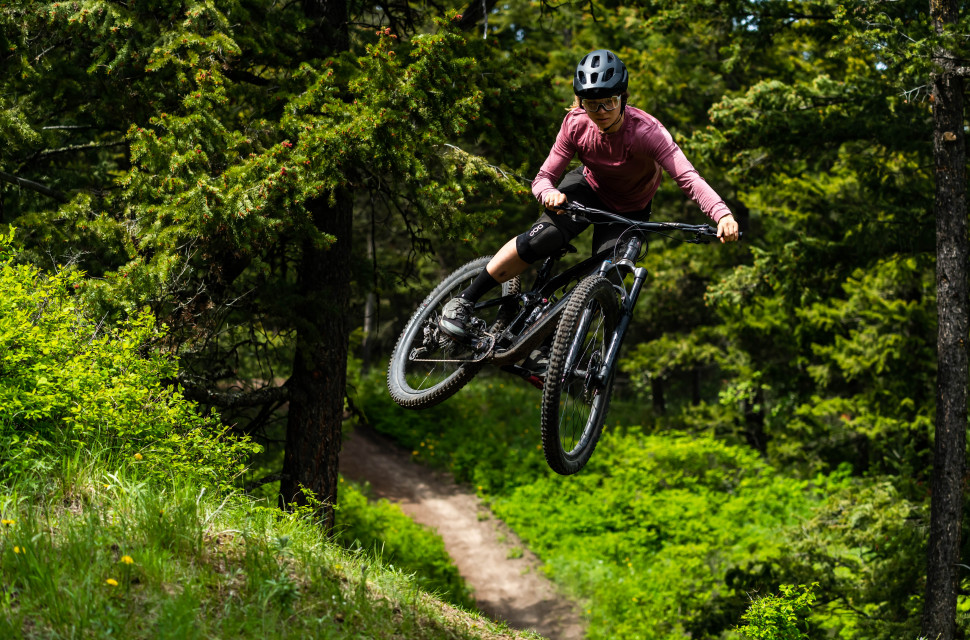 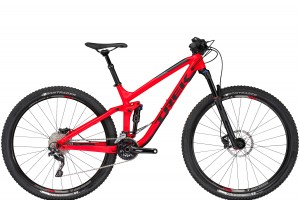 Trek has just launched its new Fuel EX, offering more travel, reach and adaptability than ever before to cater for the ever-growing trail bike market. It could be one of the best mountain bikes you can buy with its plentiful adjustability.

The biggest change in the 2023 Fuel EX trail bike is the travel, which has been increased by 10mm, now offering 150mm in the front and 140mm at the rear. It shares a lot of similarities with the recently released Fuel EX-E, just that the EX-E comes with a motor.

Trek has overhauled the Fuel EX’s geometry to better suit riders of all heights and sizes, and the bike comes in eight different sizes ranging from XS to XXL. 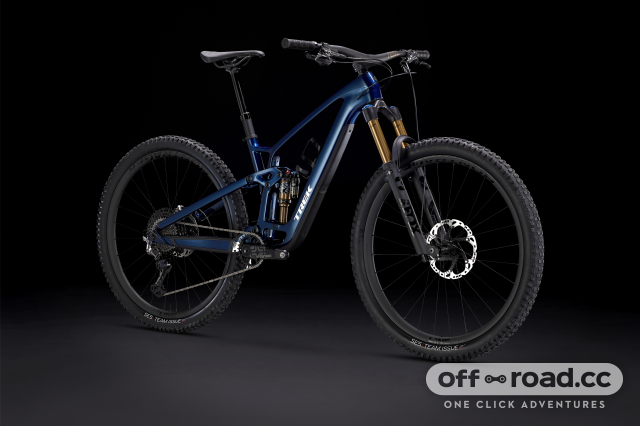 The bike now has a slacker, 64.5° headtube angle, meaning the reach increases 10 to 20mm depending on the frame size. But with the front moving forward, the back is following. Trek has steepened the seat tube angle to 77.5°, meaning that even though the reach is longer, the cockpit can stay the same but the rider is positioned slightly more forward and their weight is well balanced.

The new Fuel EX has stolen some neat designs from the brand’s downhill-orientated Session, including the chainstay lengths that range from 435mm to 450mm throughout the size range.

The smallest XS frame can only accommodate 25.7in wheels, the Small frame can take either 27.5in or 29in, and all the sizes above these come with 29in hoops. 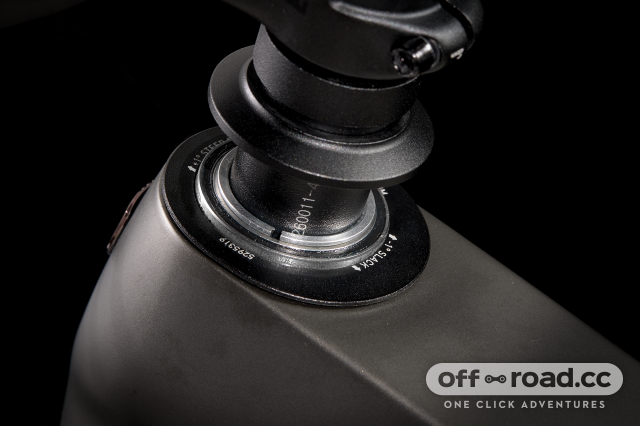 Trek says the focus of the Fuel EX has been to offer a lot of adjustability for riding preferences.

The bike comes with Mino Link, which offers the choice of a slacker and lower position. The Fuel EX is set up so that the high position is where the previous Fuel EX was on the low setting, resulting it also having a longer fork. This means you can get the bike even lower for those flowy corners. 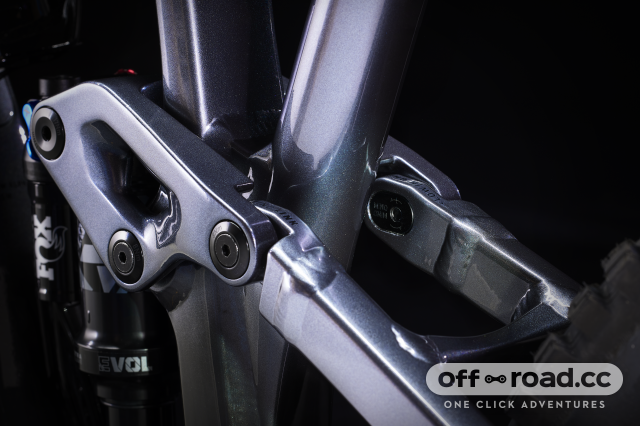 The headset cups can be swapped get a full degree of head angle adjustment without affecting any other measurements on the bike. The Fuel EX comes stock with the zero degree cups, but with replacement cups this can be changed to fine-tune the steering.

Trek confirms the Fuel EX can also be ridden as a mullet with the help of all the above adjustments.

And if all of this sounds like a lot, Trek has added a dynamic geometry guide to their website so riders can visually check how the changes affect the bike. 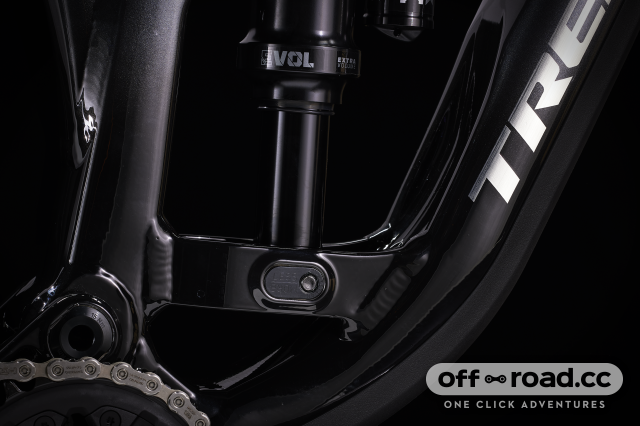 Suspension-wise, Trek has brought in a Progression Chip that allows the rider to adjust the bike's leverage rate. This is more than just adjusting the air spring and coil position - Trek says it really adjusts the feel of the bike. In action, it affects the speed of the shock and how quickly it accelerates, which will impact the feel of the bike.

The more progressive leverage rate setting makes the bike good for chunky trails, whereas the higher leverage rate position gives you more bottom-out resistance for flowy trails. With this Trek has aimed to make the link adjustment simplified - something they already did with the Session. The leverage rate used to be an expensive team-only option, but Trek has now made it available for everyone in the Fuel EX.

The Fuel EX has also an updated look. With a bigger 34.9mm seat tube diameter Trek has built a bigger, stronger tube meaning it’s more durable even with the now fashionable long dropper extensions. But the burlier seatpost area meant that Trek had to move the shock out of the way but they’ve still aimed to keep the standover at a reasonable level to maintain storage space. The XS frame can fit up to a 444ml bottle, the S, M and L can fit a 621ml and the extra large can take up to a 769ml bottle. 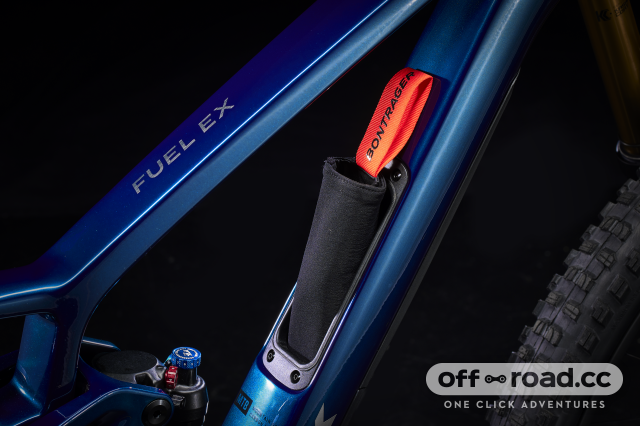 Storage is now available in both the alloy and carbon models. And to make the bike look clean the Fuel EX has full-length internal cable tubes - something Trek says makes re-cabling easier and also prevents anything from rattling on those trails.

The Fuel EX has full-length guards on the downtube, even including tailgate protection if you happen to use a pickup truck to transport the bike. These guards can be taken off if you don’t need them.

There are eight Trek Fuel EX models in total. The Fuel EX 5 is a carry-forward and comes with 130/140mm travel. Moving up, 7 gets the new 2023 chassis with storage, RockShox 35 Gold RL fork and Shimano SLX/XT shifting. Up from that, the 8 gets a Fox Rhythm 36 fork and Shimano XT shifting but still an aluminium frame.

Fuel EX 9.7 is the entry-level carbon with Fox Rhythm 36 fork and Shimano SLX/XT shifting. On the 9.8 the fork is Fox Performance 36 you can choose either XT or GX AXS transmission, and the top-of-the-range 9.9 has Fox Factory 36 fork and similarly comes with XTR or XX1 AXS.