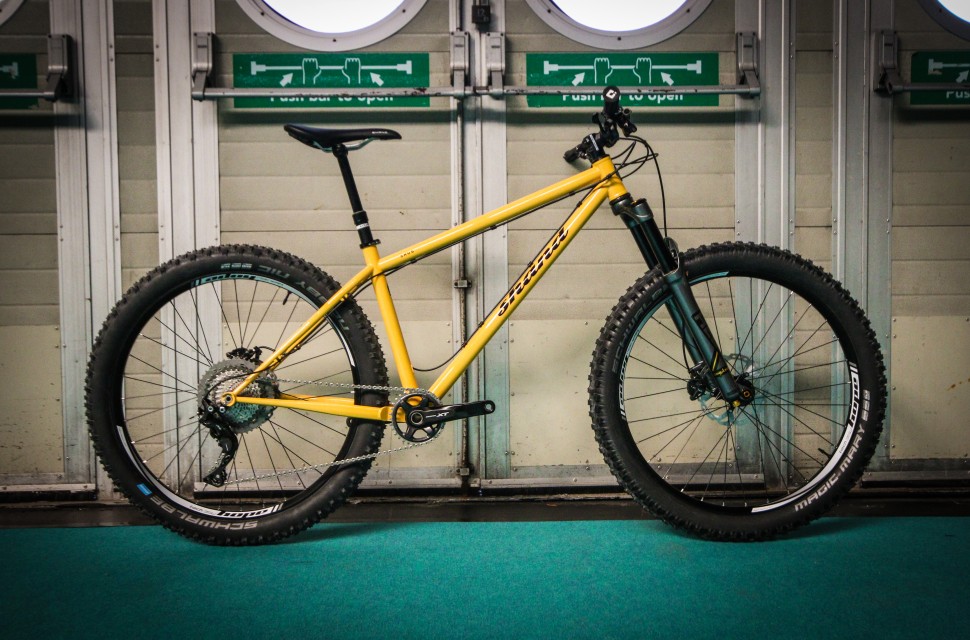 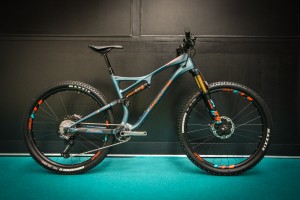 With many of the big bike brands not in attendance at Eurobike and the like there were plenty of new bikes on display at the Cycle Show 2018. Whilst we might have seen a few of this little lot on the internet, there were still some surprises from the likes of Stanton, Shand, Ribble, Mason and Calibre who launched new mountain and gravel bikes at the popular NEC show.

The new 120mm 29er has been teased for a while now, it was on display at the Cycle show which points towards bikes being on sale in the near future. We had a full first look at the new steed from Whyte here. 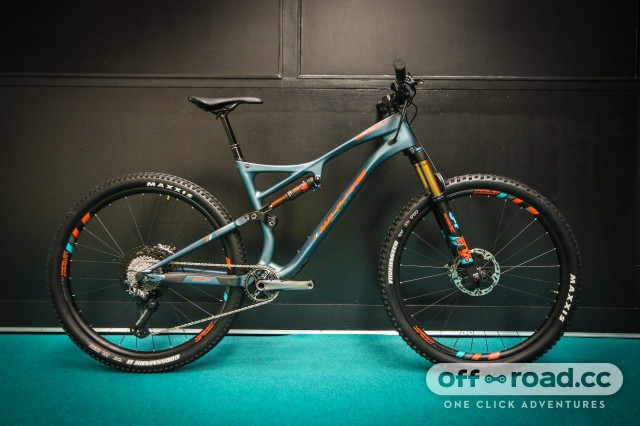 This looks like an ideal bike for getting started at gravel riding. The new G2 is a full SRAM Apex build with hydro brakes for just £1,500. We've got loads more information here. 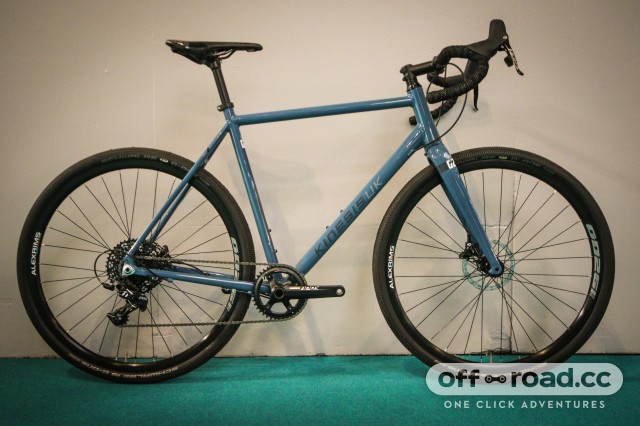 Here’s the brand new Kinesis GTD, the successor to the GF_Ti with an updated titanium frame designed for the “ultra-endurance” types that would think nothing of sleeping in ditches and bus shelters and carrying all their provisions in bags strapped to the frame, as the bike above demonstrates. There’s space for up to 34mm tyres and with mudguards fitted it takes 30mm tyres, and the disc brakes use the now common flat mount interface and 12mm thru-axles, with all cables and hoses internally routed. 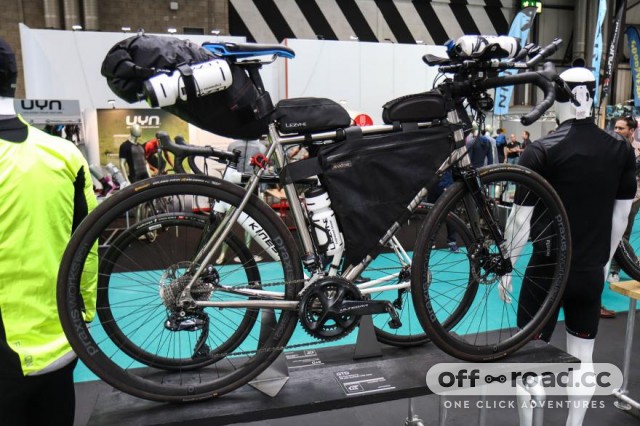 This the new and smaller wheeled brother of the equally lovely Swtich9er. The Swtichback FS runs on 27.5" wheels and can feature either 140mm of travel of 160mm, changing travel means a different linkage and different rear triangle as the pivot point is altered. In the 'Trail' mode at 140mm the head angle is 65 degrees, coupled with a seat angle that is pleasingly steep at 77 degrees and an average reach of 466mm for the size large. Stanton says this new bike is about a month away from production. 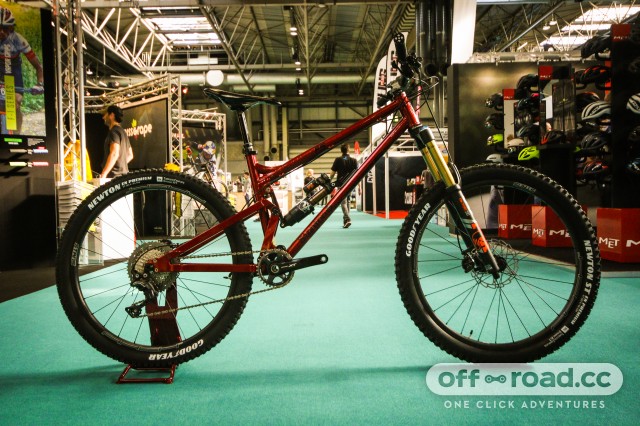 Name sound familiar? it should, this is actually a Trillion Shug in Shand clothing, click here for the news about that new bike. Shand and Trillion have been working together recently after they were both bought by Liberty House and this seems to be the latest twist in the tale. Whatever it is, it gives Shand a cool and rather aggressive hardtail to add to the mix. It's a 130mm 29er or 2.8" x 27.5 wheels if that's more your bag and we think it looks rather good in its yellow Shand outfit. Hopefully, we will have one in for test soon... watch this space. 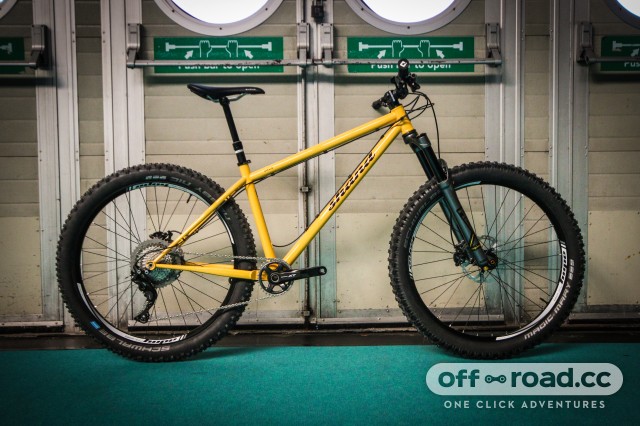 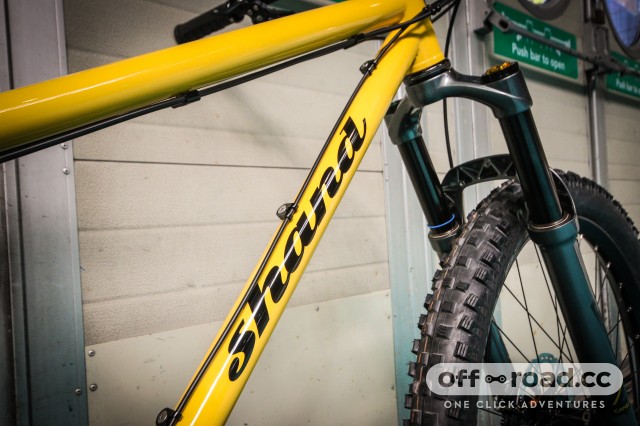 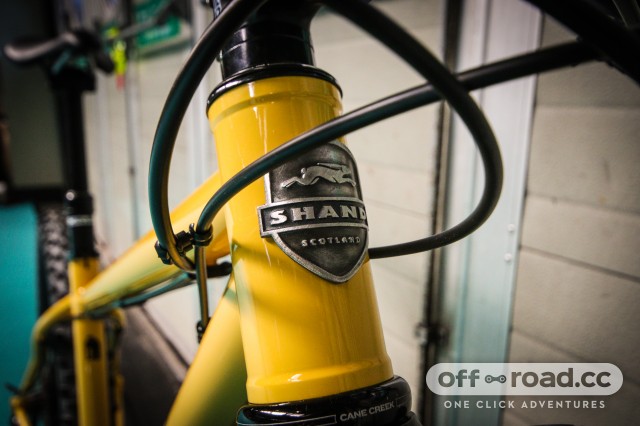 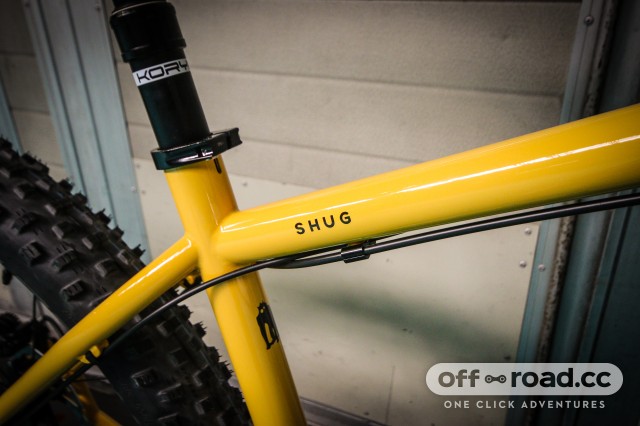 Ribble launched a whole new range of bikes at the Cycle Show, the ones we were interested in were the two new Adventure bikes, aptly named the Adventure Ti and the Adventure 725. Both frames are identical in geometry and as the names the former is a titanium framed and the latter steel. You can build up the bikes to your specification on the Ribble 'bike builder' website or buy them as a frameset - the ti frames get a carbon fork and the steel one sports a steel one. 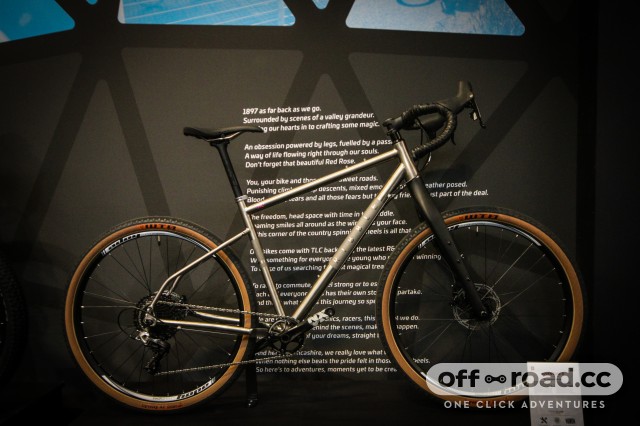 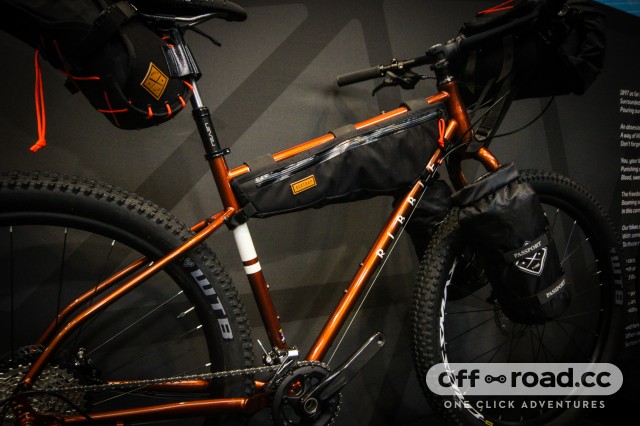 A step away from svelte road bikes and sleek gravel bikes, the InSearchOf (ISO) is a 650B or 29er wheeled, fat tyre wearing, dropper post using trail crusher. It's got a mudguard that is load bearing and can be specced with a dynamo front hub with internally routed cables too. Here is is in two very different guises: 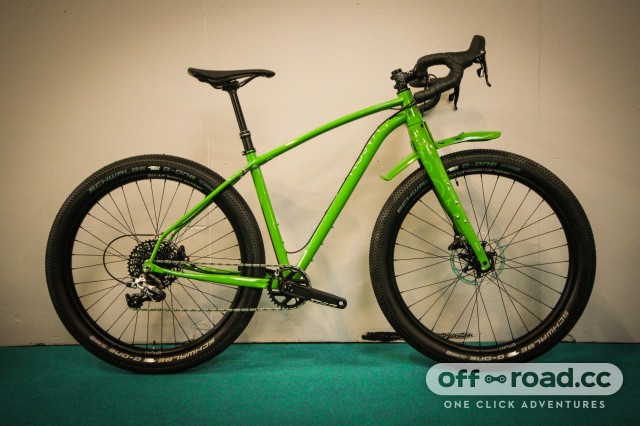 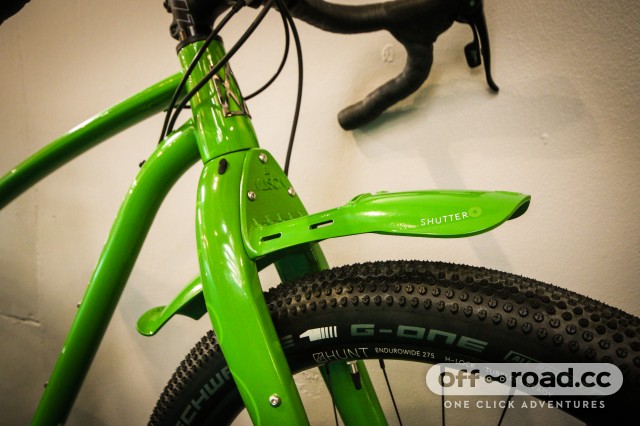 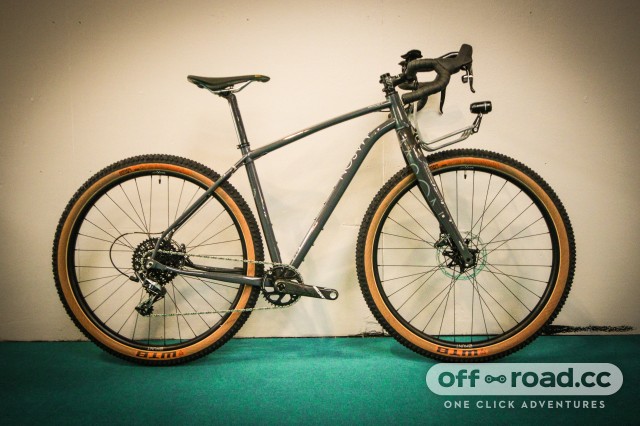 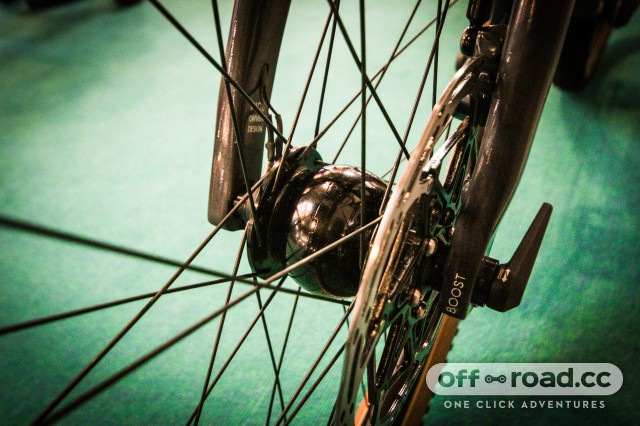 Cannondale’s new Topstone was shown for the first time in the UK, pictured with a SRAM Apex 1 groupset and costing £1,799. You can watch a video of the new bike here, and find out more about the company's new gravel machine that's just as willing to turn it's hand to touring, commuting or just being a fatter-tyred all-round road bike - so basically the kind of versatile drop bar machine that's becoming increasingly popular these days. 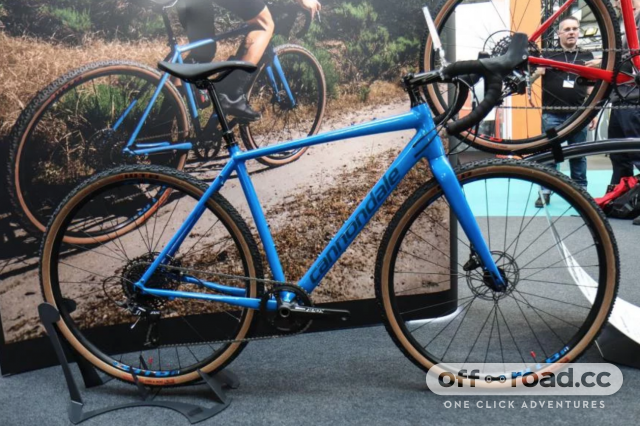 Also the Slate is back! It was probably ahead of its time when it first launched a few years ago, so it was pulled out of the UK market last year though was still available in the US. Now though, with the gravel and adventure market maturing, the Slate has been brought back. There are no changes to it, so the same Lefty Oliver suspension fork and an aluminium frame with space for 650b wheels and tyres, though this £3,199.99 model is rolling on 700c wheels 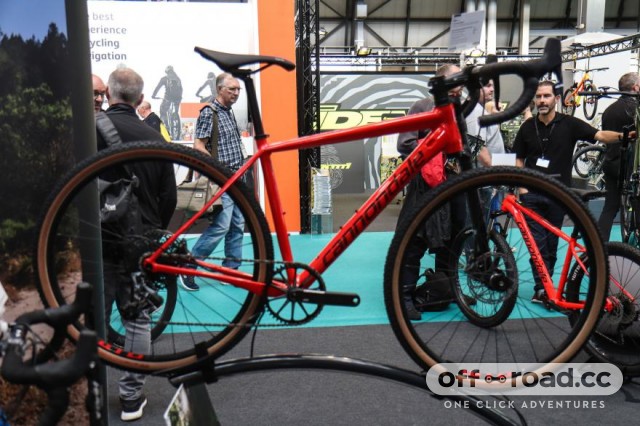 Just launched back in July, we still hadn't managed to see the all new Force and Sensor in the flesh, all the info on the new bikes are here. We took a look at a couple of the lower spec models, pictured below, the longer travel Force is the red bike and the shorter travel Sensor is in grey. The Force as pictured here with a Rockshox Revelation fork and Deluxe R shock is £2,299 and the Sensor Sport is £1,599 with Rekon fork and X-Fusion shock. 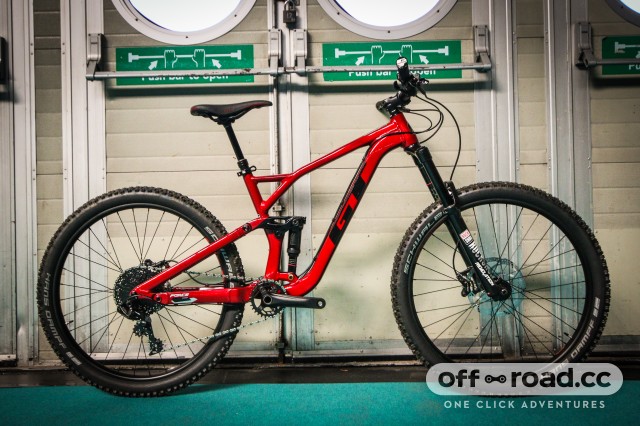 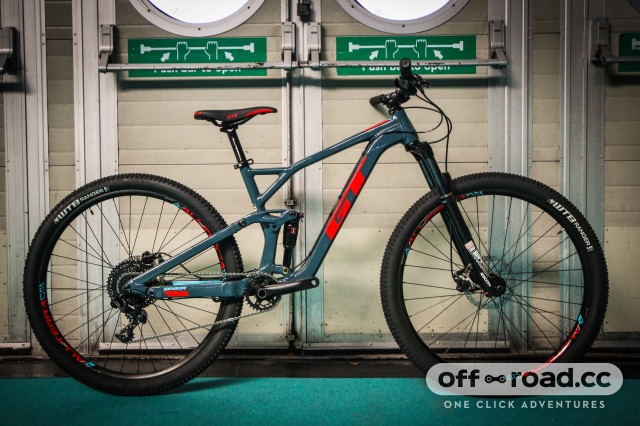 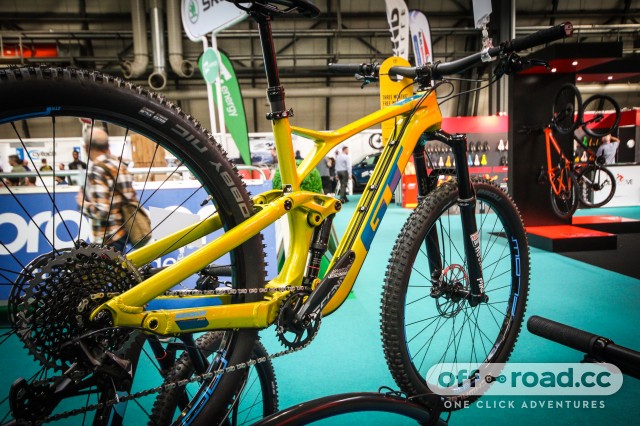 With a Bosch motor, a fully enclosed battery and 150mm of travel alongside Kona's progressive geometry, the Remote CTRL looks like a pretty fun ride! There is just the one model on offer and it will cost for £4,299 but it looks great and we're dead keen for a razz on one. 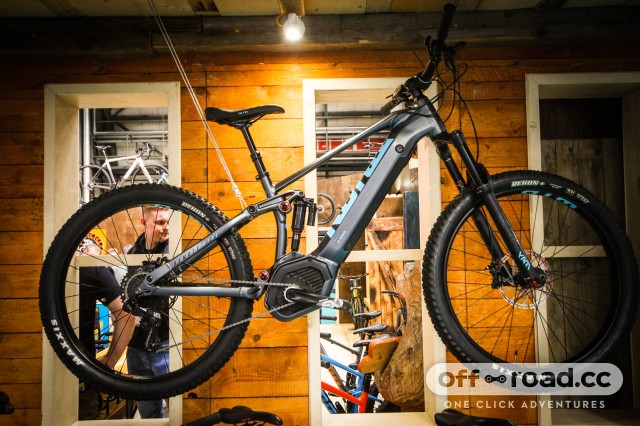 We liked the Kona Libre from the photos of it at the launch and it looks even better in the flesh. There is also a rather beautiful purple version, we'd like the Libre DL build kit on the regular Libre frame please! 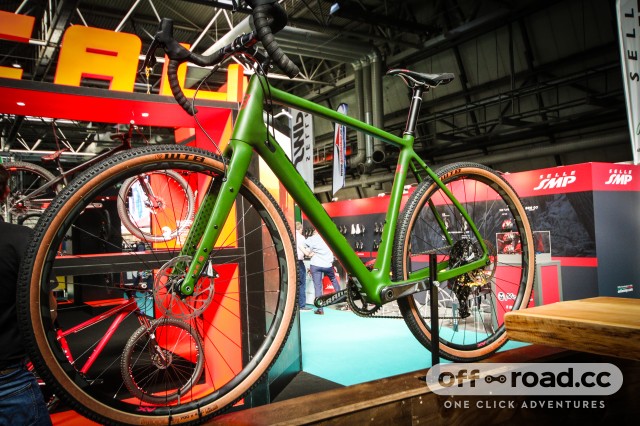 We told you we'd go looking for it and we did, but we still were not allowed to see it! The new long travel bike that is set to be the biggest bargain of the year will be launched at the end of November. For now, we have a silhouette and very high hopes for a long travel, long geometry trail slayer from the Go Outdoors brand. 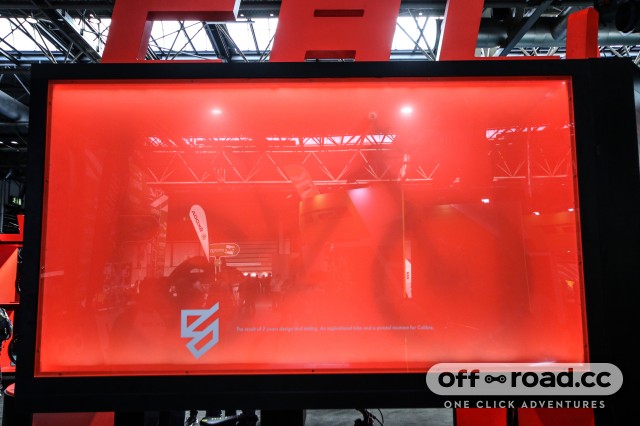 Vielo has followed up its V+1 allroad/road plus bike that road.cc reviewed back in April (and really liked) with the V+1 Rival, a complete bike costing £3,499, quite a bit cheaper than the £5,299 for the original. 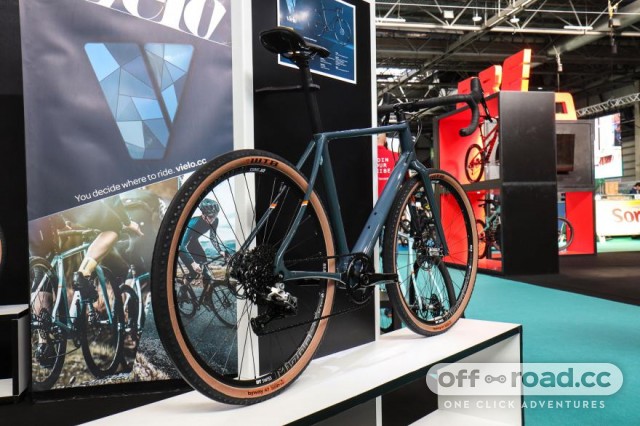 Condor Cycles has launched the new Stainless Gravel Disc. It uses the same Columbus XCr stainless steel front triangle as its Super Acciaio road bike, but with a new rear triangle to provide clearance for up to 40mm tyres, combined with a Columbus carbon fork, 12mm thru-axles and flat mount brakes. If this amazing orange isn’t your cup of tea, there are another 49 colours to choose from. It ain’t cheap though, it costs £3,599.99 for the frameset. Externally routed cables for a simplicity and an externally threaded bottom bracket for a creak-free life. 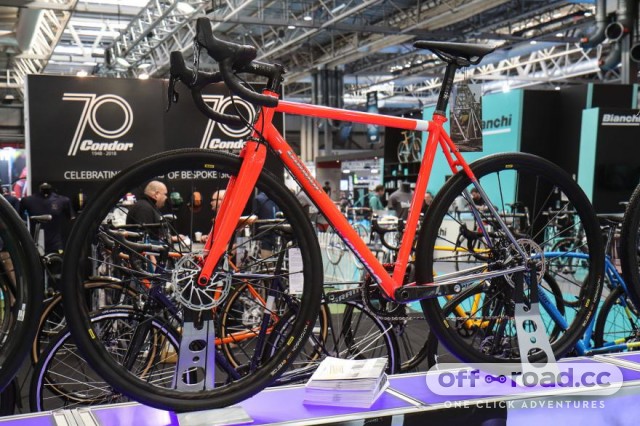