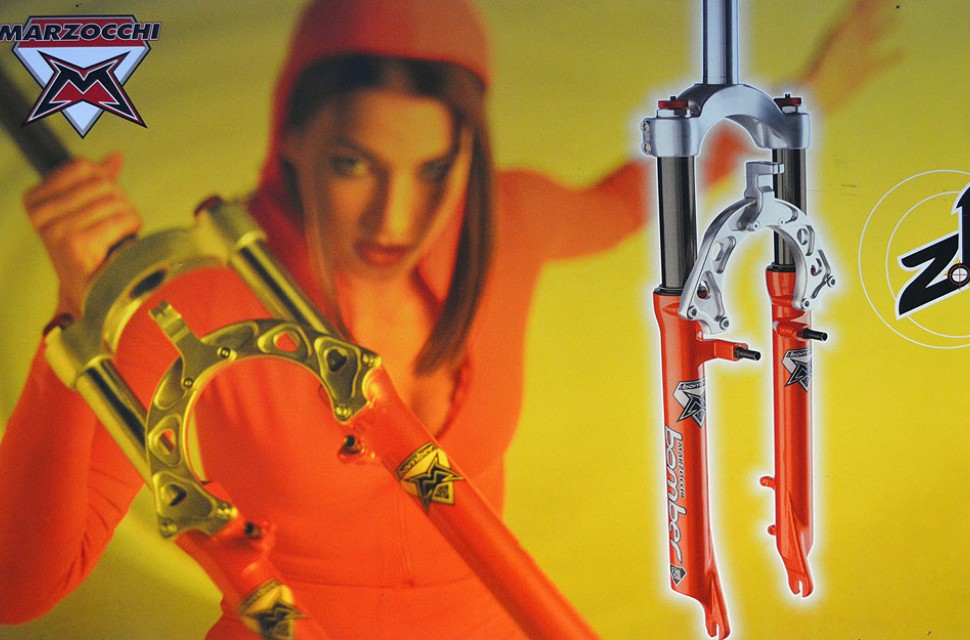 With the announcement that the legendary Marzocchi suspension brand is switching UK distributors after 22 years, we thought it was as good a time as any to take a look back over the most influential, most interesting and best forks the Italian suspension master has ever made. Read on for their biggest hits...

The Marzocchi brand grew from two brothers working at the prestigious Ducati motorcycle marque. In 1949, they decided to go it alone and start manufacturing their own motorbikes, before deciding to specialise in hydraulic suspension units. As mountain biking took off in the 1980s, they branched out and began to make bicycle forks. After a few years finding their feet, they made their reputation with a single product... 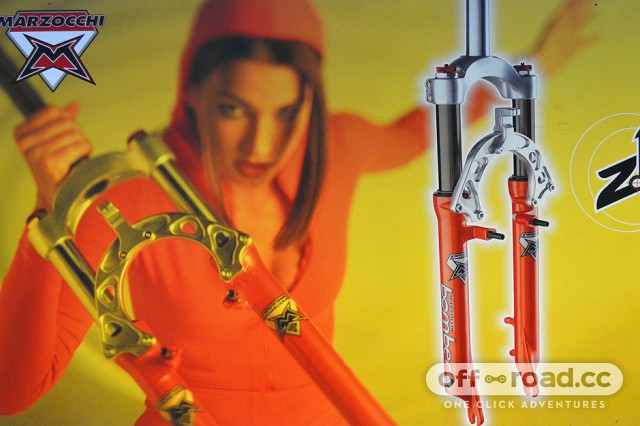 It's no exaggeration to say that this is possibly the most influential mountain bike suspension fork of all time after the pioneering RockShox RS-1. At the time, most suspension forks were spindly legged items, with manufacturers more worried about trying to keeping weight competitive with the then-ubiquitous rigid forks than outright suspension performance. Most still used elastomeric rubber as both the spring and damper, with travel rarely exceeding a paltry 63mm. That might have made for a light fork but there was no damping adjustment and the rubber would also stiffen up hugely in the cold or get very springy if hot. Consistent, they weren't.

The Z1 threw all that out of the window, dipping into Marzocchi's motorbike heritage to use a combination of an open bath oil damping cartridge and a coil spring in each leg. The Z1 also pushed the limits of suspension travel, offering what was then a whopping 100mm of squidge. Due to the open bath oil design, the damping was adjustable for both compression and rebound - almost unheard of at the time - and the large volume of oil sloshing about in the legs meant they were low maintenance, hugely reliable and extremely consistent.

The chassis was hugely overbuilt compared to its rivals and the fork had a significant weight penalty, but it proved that precise handling and real suspension performance could more than make up for that. 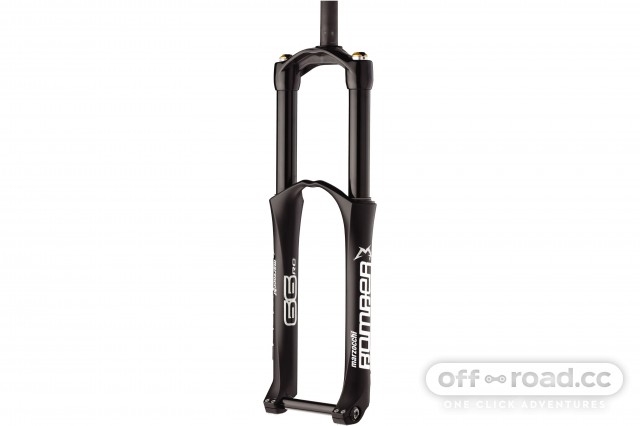 Move forward a few years and into the beating heart of the North Shore and freeride era and once again Marzocchi came out with a product that changed the way people thought about suspension forks. At the time, most long travel forks - and anything over about 130mm was considered long travel - were triple clamp designs, where the legs extended above the crown and were then braced by a second clamp at the top of the headset. That meant steering lock was limited and, importantly, you couldn't pull any rad bar-spins or X-ups when you were out freeriding.

Into that world came the 66. Based on the equally influential 888 downhill fork, it offered a huge 150mm or 170mm of travel in a single crown design. Despite losing the bracing of an upper crown, it was still plenty stiff thanks to seriously chunky lower legs and a steel steerer tube that was almost a solid bar where it entered the crown. Okay, it wasn't the first long travel single crown fork - the Manitou Dorado takes that honour - but it probably made the biggest impact of that first crop, and not just because it weighed a sodding tonne.

Marzocchi's open bath oil'n'coil suspension made for a buttery smooth, hard hitting and reliable fork that found its way onto bikes that were the forerunners to today's enduro machines. Okay, the fork alone weighed over 3kg, so the result was some rather chunky complete bikes, but this was an era where a 'freeride' bike could weigh over 18kg and no-one would blink an eye. The less said about the huge axle-to-crown length of the first generation forks, the better too. 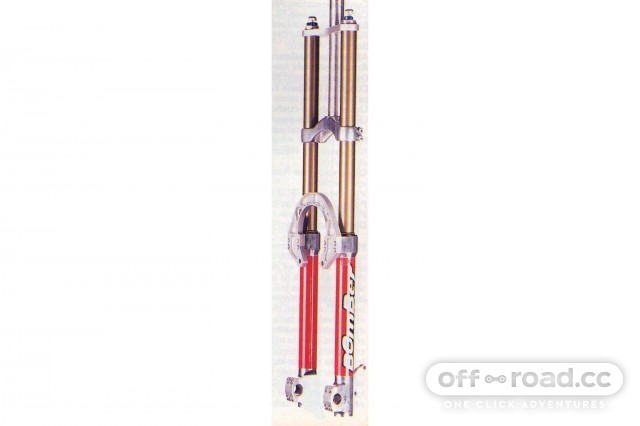 While the single crown Z1 was a success, it became apparent that for pure downhill race use, a dual crown fork offered extra stiffness. That led to the Mr T fork, which was essentially a dual crown Z1. As team riders demanded more travel, that was developed into the Super T, which offered much more travel mated to an extra burly chassis with a super wide stance and 20mm through axle hub held in place four bolt clamps on either leg. As mountain biking began to fragment from a sport where one bike did it all into the many varied disciplines we have today, the Super T pointed the direction downhill forks would go in from then on. 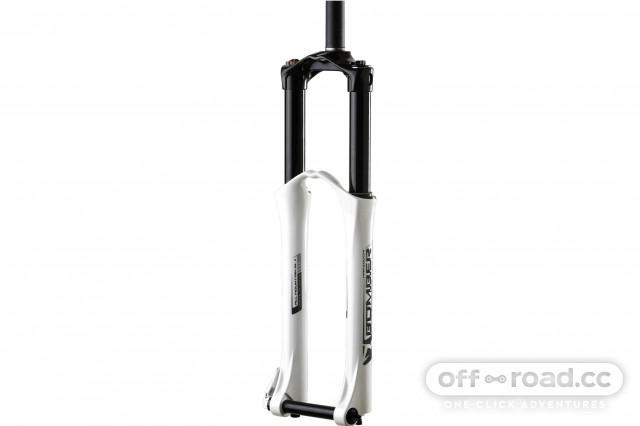 Moving on a few years and the bike industry had realised two things: firstly that this long travel single crown fork thing had legs and secondly that making stuff lighter meant you'd be able to having more fun riding the thing uphill as well. Along with the RockShox Psylo, the AM1 was pretty much the first fully formed enduro/trail riding fork, with travel that could be adjusted from 120-160mm, adjustable damping, an air spring and a quick-release through axle to boost stiffness without adding too much weight.. Modern equivalents might be lighter and have more advanced damping, but the AM is pretty much the same pattern as what you'd expect to see on a trail bike today. 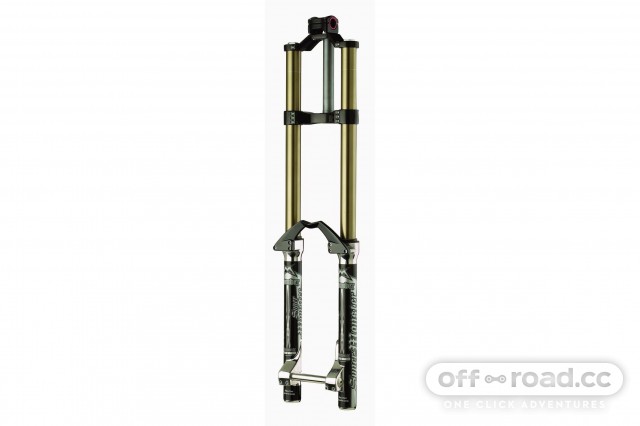 As we reached peak freeride in the mid 2000s with the infamous Josh Bender leading the way by throwing himself off bigger and bigger cliffs, Marzocchi released the Super Monster T, which sported a ridiculous 300mm of travel. It shared more in common with a motocross fork than any mountain bike fork to date and dwarfs any normal downhill fork put next to it. As you'd expect, it's coil sprung with adjustable open bath damping and it's massively heavy, tipping the scales at around 6kg. Of course, hardly any bikes were designed to accept it and hardly anyone actually needed it, but it was a typically bonkers project from the back rooms of Marzocchi. 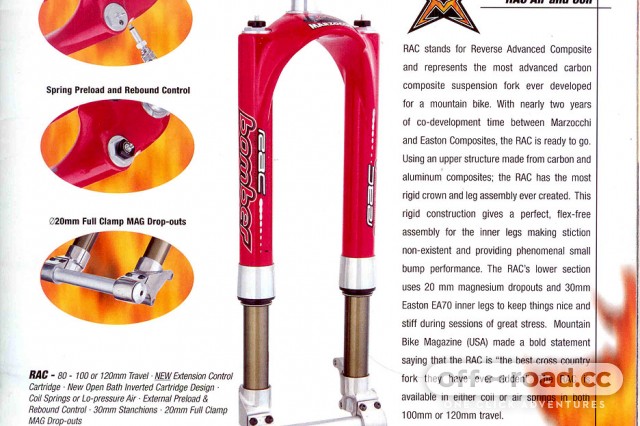 Talking of bonkers projects, the RAC stands head and shoulders above the rest. The name stands for Reverse Advanced Composite as the upside-down design used an upper made from Easton carbon fibre which, at the time, was a massively high-tech material that was only just being used for frames and components.

The fork grew from a desire to make a lighter fork that could be used for cross-country racing, hence using composites to offset the weight of the open bath oil damping and sturdy aluminium lowers. You could have it with coil or air springs and travel ranged from 80 to 120mm.

Sadly, the fork was beset by production problems and was rarely seen at the time and is something of a retro-bike unicorn nowadays. At the time, rumours swirled that the reason the fork wasn't widely released was that the carbon upper was so stiff it would snap the headtubes off bikes not up to the task, which had the scent of bullshit about it at the time and is positively ripe in hindsight.

Even so, it was a technological marvel and showcased the sort of technology Marzocchi could bring to bear, as well as highlighting its innovation in the world of upside down forks. In the end, the huge expense did for it and Marzocchi's later cross-country forks followed a much more conventional path.

Do you think we've got the list right? Have we missed any out? Did you own any of these? Do let us know in the comments below...