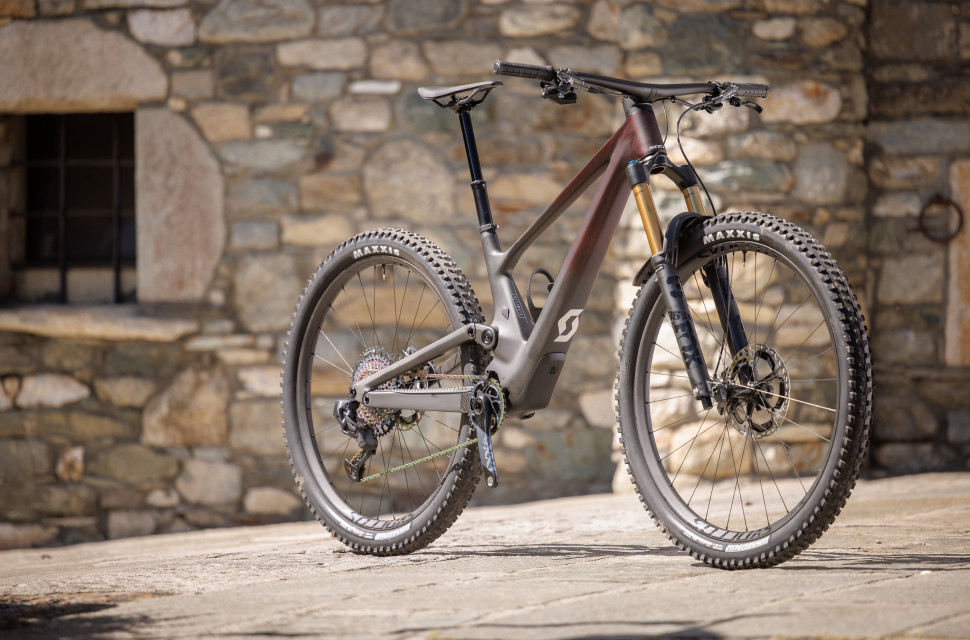 Scott has today launched an all-new Genius, draping it with a very similar look to what we’ve seen on the brand’s recent iteration of the Spark. The new bike comes laden with fresh tech and interesting innovation, and Scott invited us to the Italian Alps to get a taste of what this new long-legged trail bike is all about.

Scott has well and truly shaken up everything we knew about the Genius, only leaving behind the 29-inch hoops and the 150mm travel at the rear. Now, the bike gets 10mm of extra travel at the front wheel, offering 160mm of squish and noticeably, it gets the striking internal shock design that we saw on the brand-spanking-new Spark cross-country bike.

Not only does this new frame/suspension design give the Genius the sleek silhouette of the Spark but Scott says that it comes with a range of benefits. It’s allowed the designers to engineer a frame with a lower centre of gravity while making it laterally stiffer around the bottom bracket. It also keeps the shock well away from any muck and dirt and, in theory; this design should prolong the shock’s service intervals. 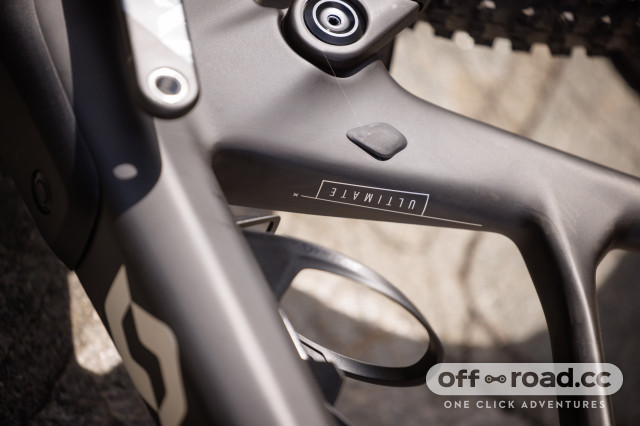 If the frame design didn’t set the Genius well apart from other bikes, the linkage certainly will as it’s designed with a spline construction. It’s said that this allows for better load distribution around the pivot. This has allowed the bike to employ larger bearings and a shaft with a bigger diameter, which increases the contact surface. Scott claims that this boosts durability and the ability to cope with larger loads. 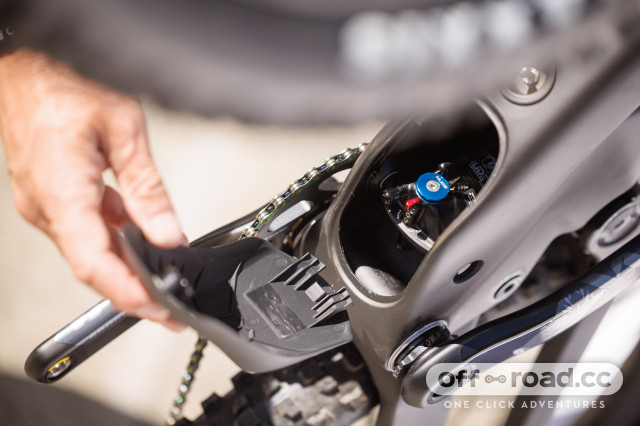 Of course, the internal shock raises questions, the main one being, ‘how do you access the shock?’ Well, Scott has done a pretty good job of working around this conundrum by cutting a hole and designing a neat cover just in front of the bottom bracket. Pushing a button releases the cover, offering access to the shock. It’s not just any shock either, as Scott has collaborated closely with Fox to design a shock especially for this bike. So instead of a rebound dial, it’s more of a lever that can be easily pushed about with a single finger. The Schrader valve and compression adjustments are placed at easy-to-reach spots on the shock, too, so access isn’t an issue.

On the inside of the cavity’s cover is a handy guide on the Genius’s cable routing and how it curves around the shock. 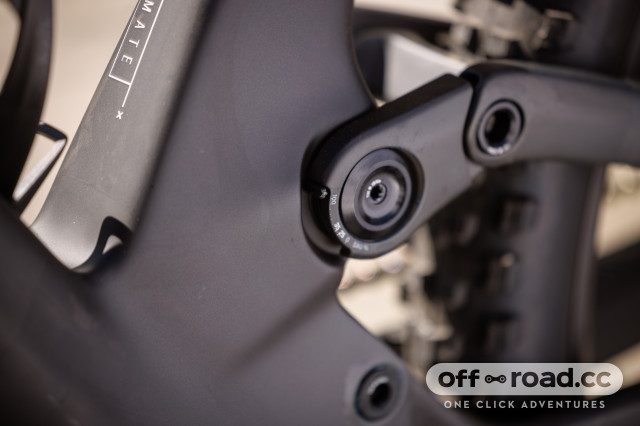 Then because the o-ring wrapped around the shock’s stanchion simply isn’t visible, Scott has been mega clever and designed a neat external sag indicator.

An awful lot more has happened to the Genius’s suspension, too, as with a new platform, Scott has fiddled with the kinematic. The bike now gets a flatter leverage curve offering 21% more progression, which gives the rider more room for shock tuning with a more consistent feel throughout the suspension travel. 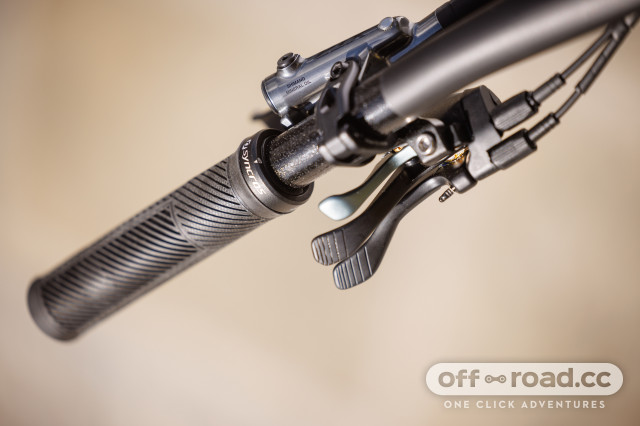 As expected from Scott, the new Genius comes equipped with the famed Twinloc system but this time around, the brand has gone about suspension lockout in a slightly different way. Instead, it reduces the air volume while keeping the damper open, restricting the travel to 60% in the middle, Traction Control mode. In climb mode, the air spring’s volume is further reduced and the damping circuit is closed off. Pressing on the Twinloc also lifts the bottom bracket.

Scott has also given the Genius’s geometry a refresh, tailoring the platform to the demands of a modern trail bike. To do so, Scott has applied the classic, ‘longer, slacker and lower’ method with the aim of creating a bike that’s happy being wrenched up a hill while providing all of the tools you need to rip it back down. 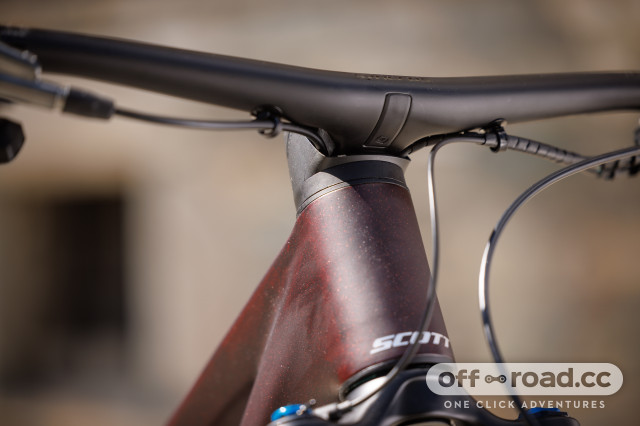 As such, 20mm has been added to the reach, the seat tube ranges from 76.8-degrees up to 77.4-degrees and the head angle has been slackened by half a degree. The large frame I was given to ride possessed a 485mm reach, a 63.9-degree head angle and a 77.2-degree seat tube. Scott has also stretched the chainstay to 440mm on all sizes. On paper, this is a very solid trail bike geometry.

That head angle is adjustable, too, which is mega handy, thanks to turnable headset cups, which offers a full degree of adjustment. During my time with the bike, I rode in both settings.

For our whistle-stop tour of Aosta’s prime alpine trails, Scott gave me the top-spec Genius 900 Ultimate. It’s built around a very fancy, high-modulus HMX carbon frame and makes use of a Fox 36 Float Factory fork with a FIT4 damper paired with a Fox NUDE 5T Factory EVOL Trunnion shock, which has been designed especially for the Genius. As for the drivetrain, this bike gets SRAM’s top-end XX1 Eagle AXS 12-speed shifting paired with Shimano XTR four-pot brakes.

Pushing the bling theme even further are the pair of Syncros Revelstoke 1.0S carbon rims with a 2.6in Maxxis Dissector inflated at both ends, each in EXO casings.

There’s a lot more to this bike but for now, we’ll get onto those all-important ride impressions. If you would like to geek out even more, head over to our news story where you can get the full low-down on the new Genius.

With the internal shock, I was most curious to see how easy the Genius was to set up, and thankfully, it's no more difficult than any other bike. Any adjustments to the rear shock were simple enough, although not quite as quick as they’d be on a conventional full susser of course - I had to remove that cover and rummage a little. Even with the cover moved, access wasn't 100% seamless as bikes with traditionally uncovered shocks. 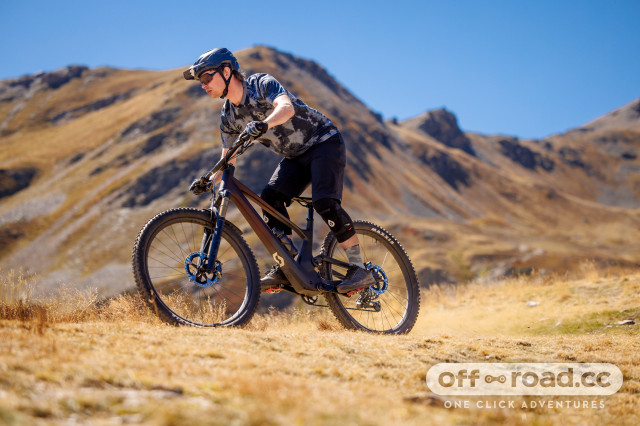 Differing from the ST model that runs alongside the Genius 900 Ultimate is that this bike is designed with more of a lean into efficiency and, with the first hour spent on the bike cranking uphill, the bike’s prowess under pedalling was stark. That’s with the TwinLoc mechanism in its open setting, too. When working myself up the mountain, the rear end of the bike remained sensible and taught, transferring nearly all power into forward momentum.

Before swinging a leg over the Genius, I preconceived TwinLoc to be something destined for the bin but during this sizeable climb, filled with flat fire roads, through to some rather techy steep sections, it’s something I used almost constantly unless I was descending. When the terrain was flat, I kept TwinLoc locked out which noticeably boosted efficiency but what I really enjoyed is that it’s not a complete lockout as there’s a bit of give in the suspension that takes the sting away from particularly harsh chatter. 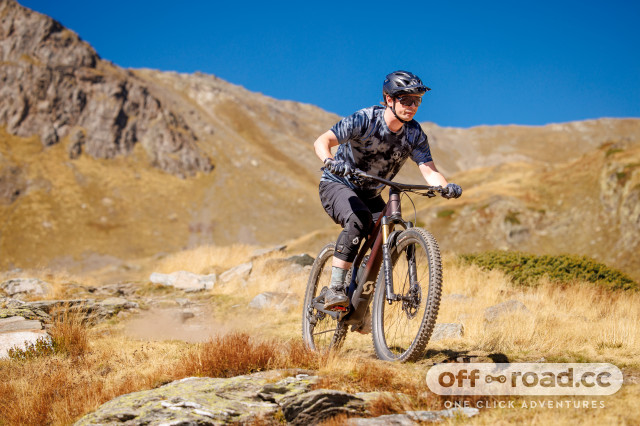 The Traction Control (middle) setting proved incredibly useful too, especially when charging up the steeper and more technical sections. It kept the bike reasonably spritely under pedalling but it cushioned more bumps and kept the rear wheel better planted. TwinLoc’s usability really took me by surprise.

While progressive, the Genius’s new geometry is pretty sensible, resulting in a bike with a comfortable cockpit when ascending while inspiring shed loads of confidence when the gradient drops. As mentioned before, its shape is adjustable too, thanks to clever headset cups. On the first day, I ran the bike in its steepest 64.5-degree setting which resulted in a supported front end when climbing but fast steering when descending, which came in handy when navigating the tighter switchbacks Aosta’s valley had to offer. 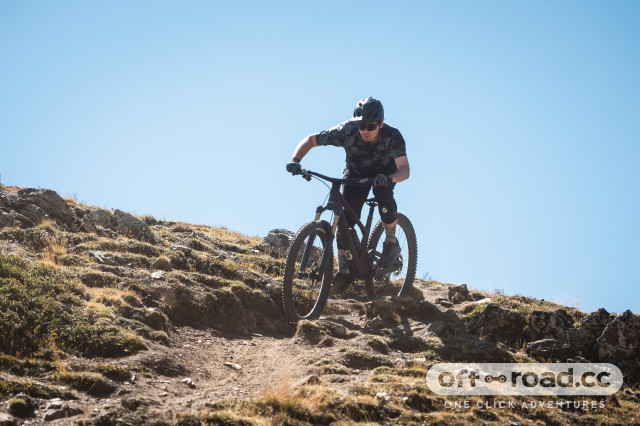 Thanks to Scott’s accommodating mechanic, I had the head angle switched to its slackest setting for the second day which noticeably enhanced the bike’s stability at speed, and its ability to hold a line when cornering while upping capability when things got a little steeper. That was at the expense of the original head angle’s support, as the front end felt a little floppier than before.

As we’re on the subject of the front end, Syncros has given the integrated handlebar and stem a tweak for this bike, claiming to introduce a bit more compliance than before. However, it could still do with a little more flex. As I rolled into the initial sections of downhill I felt as if I had to adjust my suspension setup but no, the handlebar was just that stiff. Some pretty serious arm pump whilst rattling over the rocky, washboard-esque terrain of the second day’s riding proved this. 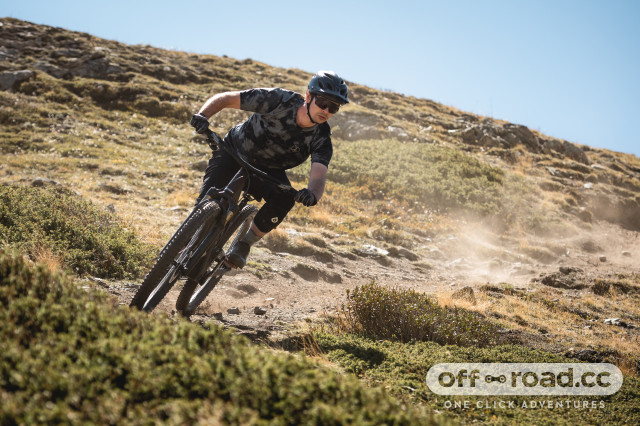 Moving to the rear, the rear suspension really comes into its own when hurtling downhill. At first, I ran 35% sag and the Genius took it well within its stride. Scott has built in a great level of progression where I never bottomed out, but the bike remained planted through chunk. I then upped the sag to 30%, which welcomed in a more supportive and playful ride but it didn’t destroy that ground-hugging character found with a little more sag. The Genius’s usable sag range is impressively wide.

A big part of the fancy integrated shock design is that Scott was able to tune the Genius’s stiffness further and this bike is one stiff number. While sliding it around corners Genius felt like one very well-connected unit with little lateral compliance. 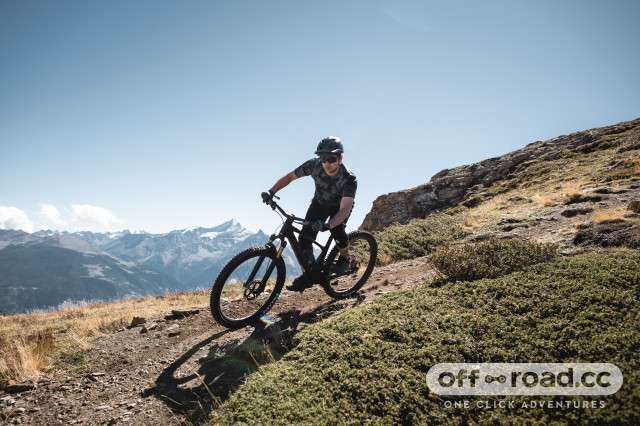 This stiffness does force the bike into relying on the tyres for all of the deformations, so having the Dissector at the front did come as a bit of a disappointment. I totally understand the choice as it rolls excellently but there were moments during steeper, dustier, and looser sections where the bike would break traction and this is where a little bite or frame compliance wouldn’t go amiss. Perhaps even flexier rims would have helped things because remember, this bike rolls on stiff carbon hoops. 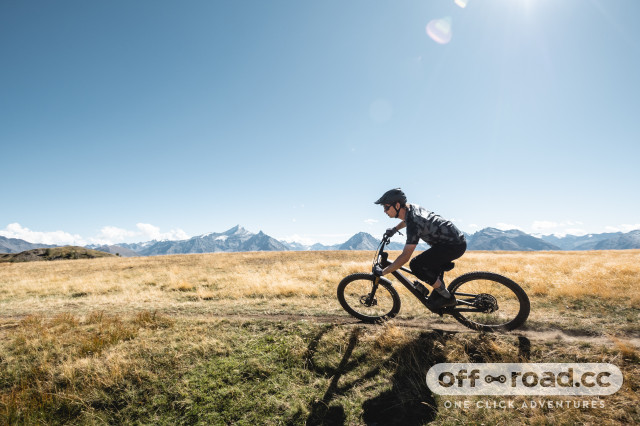 Generally, the Genius was excellent fun to ride and the efforts that the designers put into the bike to make it efficient yet confident were clear. In fact, there were multiple times when I charged into sections with more speed than I would like but with absolute conviction. That's wholly thanks to the geometry choices and sorted suspension kinematics.

With the Genius Ultimate 900, Scott has designed a bike that's proving to be stiff, efficient, and a total hoot downhill. The brand has been intelligent in shaping the bike without going too wild, resulting in a rig that inspires all of the confidence you'll ever need. Then, the brand has done a stellar job with the suspension kinematic, making it compliant over the rough stuff but supportive, without sucking all of the fun from the trail. It's incredibly adaptable too, thanks to that wide usable sag range and adjustable headset cups. As it stands, the Genius is ticking all of the trail bike boxes.