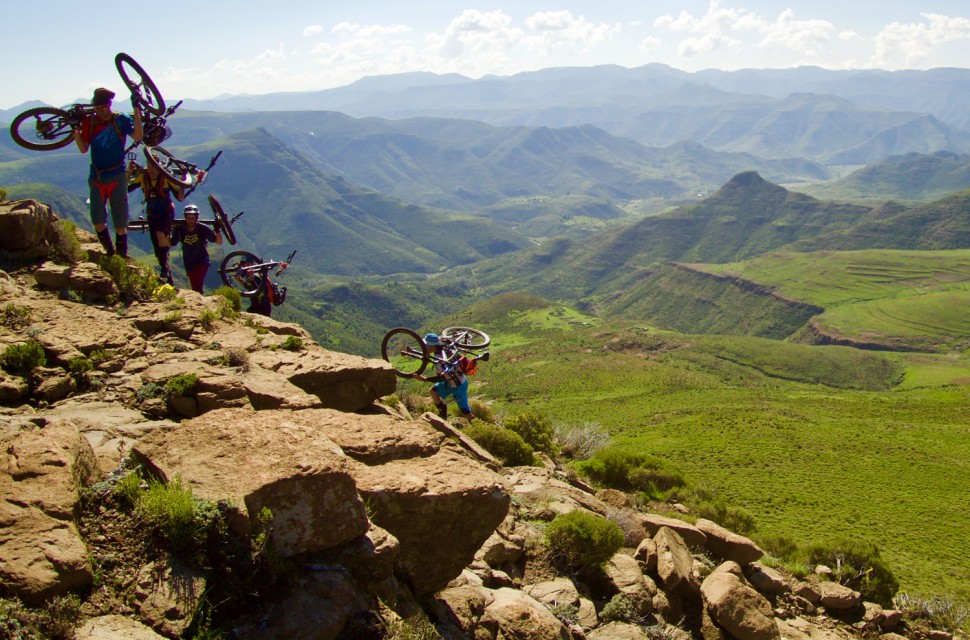 What do you do if you want to plan a riding trip with a bit more adventure than your usual? For a professional bike guide, you need something with difficulty, adventure, culture and more - something that three days of enduro racing in then high-altitude African Kingdom of Lesotho would provide by the bucketload. Sam from BikeVillage takes up the story:

3000m up in the Swiss Alps is a good place to plan an adventure. That’s where we were last autumn, wringing the very last drops of goodness from an absolute belter of a European summer when talk turned to the next objective on the horizon.

Our tick list was pretty high maintenance by anyone’s standards. Awesome biking went without saying. It had to be technical and basically bloody big in scale because the second thing we craved was an adventure. A bit of Type 2 fun (i.e. suffering) to add some zest to the endless savage singletrack we had in mind. Lastly, we wanted a sense of discovery, more on a social and cultural level than simply a new riding environment. 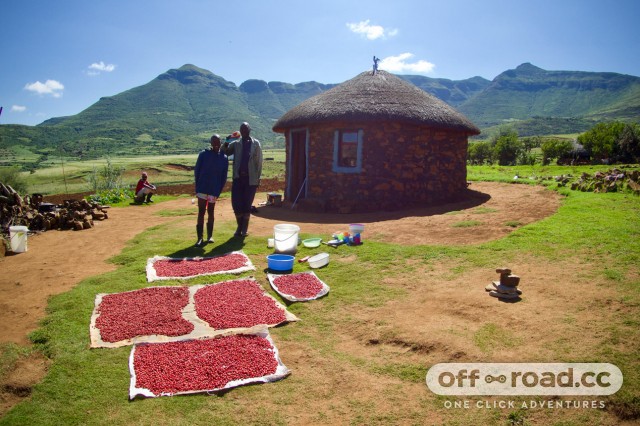 All we needed was an idea that ticked all these boxes, ideally at the tail-end of winter to warm our bones after the long cold months spent dreaming of dusty trails.
Enter the Kingdom Enduro at stage left. A three-day event billing itself as ‘Africa’s most badass Enduro’, it’s also an Enduro World Series qualifier event and it takes place high up in the Kingdom of Lesotho. Where? We didn’t know either.

Lesotho is a mountain Kingdom boasting the highest lowest point of any country in the world, at 1400m. With a high point of 3482m, that means that the entire country starts from a little higher than the summit of Ben Nevis and rises up over two vertical kilometres from there. It is a fertile, verdant agricultural land, formerly known by colonists as the breadbasket of Africa. 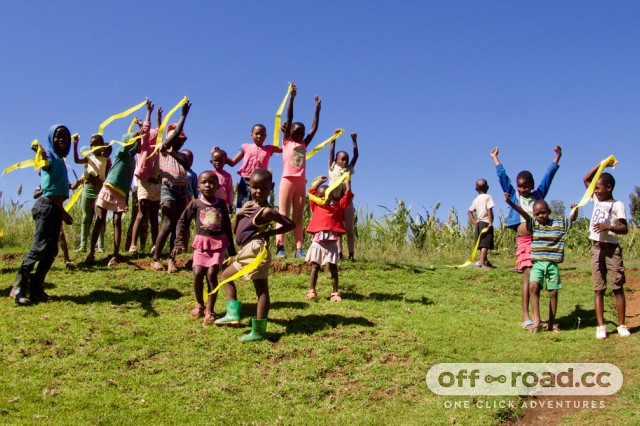 Mechanisation is pretty limited and horses and donkeys still fulfil vital roles in day to day life. Just in case this all sounds too idyllic, a quarter of the adult population is HIV positive, infant mortality sits at a terrifying 8,3% and no country in the world has more tuberculosis. Contrast and paradox were to prove constant companions on this trip.

Anyway, the 2018 video looked a blast, flights were cheap and we’d never been anywhere in Africa so we literally saw it, booked it and f**ked off.

Fast forward a few weeks and we’re sat in a crap, rattly hire car at rush hour in Maseru, the capital of Lesotho. With the windows down it’s a sensory overload. Trucks, minibuses and pickups move around us like bees crawling on a hive. The air is thick with new (to us) smells – first food frying in roadside stalls, then burning plastic mixed with wood smoke as people cook over the acrid fumes and always, always the vehicle exhaust. Never had carcinogens smelled so exotic. And the noise! Pedestrians moving through the traffic by a sort of high-risk osmosis, shouting, whistling and calling. The taxi minibuses, wheel arches pinned to the tyres by years of overloading and potholes, beeping constantly to advertise a free seat. 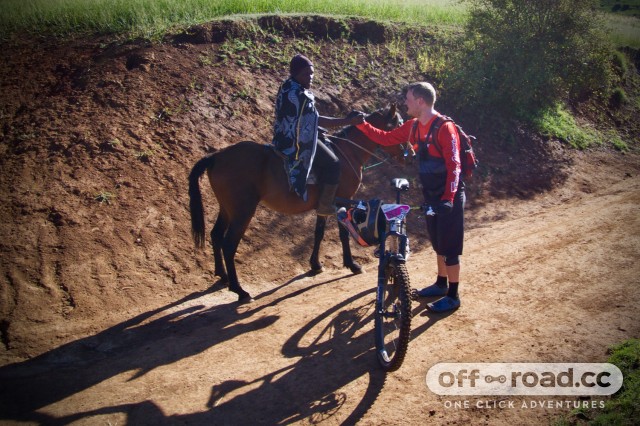 Then the calm. The beautiful Roma Trading Lodge, which serves as race HQ, sits on the outskirts of Roma town in the bottom of a sort of natural amphitheatre, known as the Roma Arena, surrounded by the trail-laden mesa plateaus and summits of the Kingdom Enduro. Think Utah with rain. 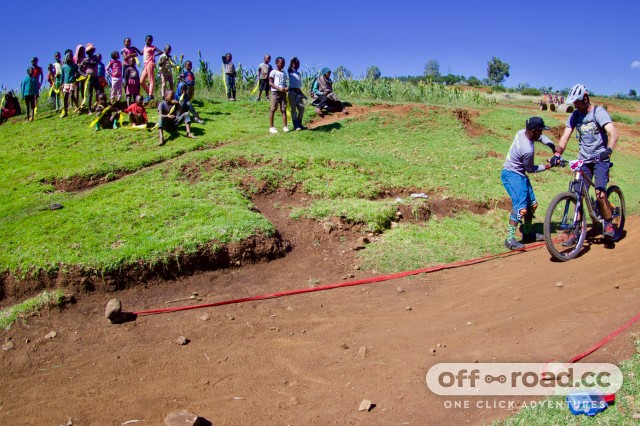 Almost straight away we bump into René Damseaux, the wiry, bearded, bespectacled mind behind the trails we’ll be racing. After years spent working in Whistler, Molini and Costa Rica, it seems that everyone knows René. From the snappers and journos through the smattering of pro riders to the ordinary mugs like us, most people there seemed to have suffered a death and/or been reborn on one of his trails in the past.

With local South African pros already coming home broken after pre-riding new stages, the chat veered between braggy and nervous as bikes were built, number boards went on and the 5am breakfast plan was revealed. 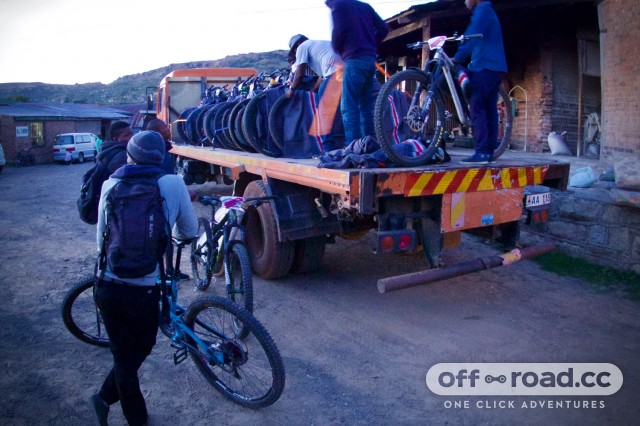 The dawn uplift saw 75ish decent enduro bikes lashed to the back of what instantly became the most valuable truck on this or any continent. In a country where petrol stations are guarded by men with AK47s, we were glad that push bike value seemed to have flown somewhat under the radar.

The uplift took us to the amusingly named God Help Me Pass at 2281m. From here there was at least 10 seconds of pedally warm up as we crossed the road before the hike a bike started. There was a lot of hiking. Not often more than 45 minutes, but if the day’s profile showed 1600m of climbing, you could be sure that 1400m of that would be with your bike on your back. Did I mention we had wanted adventure? Check.

Now imagine yourself standing on top of a mountain nervously pulling on pads, gloves and goggles. Kicking the caked-in grit out from your shoes as the wind gently reminds you who’s boss up here. You can see summits all around you in the distance but in the foreground all you can see is painted dots marking the ‘line’ along red crystalline bedrock half the age of the earth. In about 50m the dots disappear abruptly, as does the riding line. There’s a drop. To get there you need to ride across an off camber bedrock slab with a roughly 10m fall into a 500m roll to your left, so no stopping here. The drop itself can be rolled, but given the slab is at about 65 degrees it’s a moot point. You’ll still be accelerating at 9,8m/s/s, just how Newton liked it.

This is both the intro and the crux move on a stage due to last around 20 minutes, one of five stages today. You are also acutely aware that you’re in a country that does not have a rescue helicopter. Sure we can ask for one from neighbouring South Africa, but it’s far enough away that it’ll have to stop to refuel en route. Anyway, you need a phone signal to call a helicopter. Don’t bin it, it’s that simple. 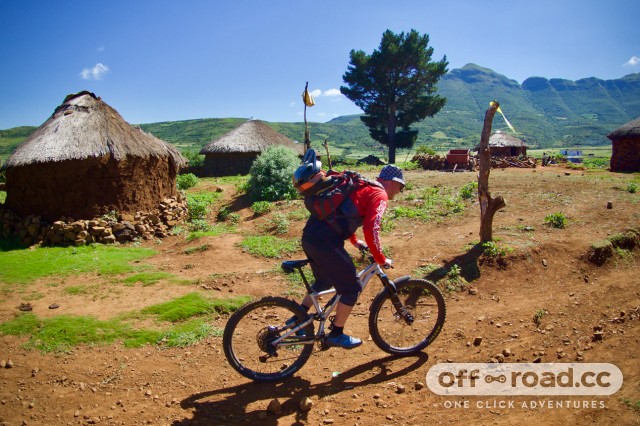 Your arms feel weak as you grip the bars, spin your chain into what you hope is a good starting sprocket and roll slowly forwards to the start timer. A quick nod to the timer and then BEEP. All hell breaks loose. The roll to the drop goes well and, as René promised, the drop itself behaves just enough to be ridden. Ridden straight into one of the nicest sections of loamy switchbacks on this planet. The loam eventually gives way to bedrock once more and then a sweaty, dry-mouthed ‘best-of’ compilation of every riding surface known to humankind. None of it is manicured in any way. Rough as guts, as my Australian family like to say. 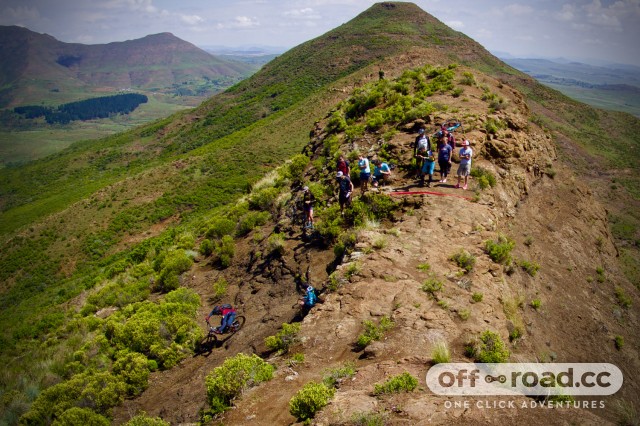 I dry-hump the bars at high speed hitting an unseen lump but hang on, musing on a winter definitely not spent cross-training. From full tilt hammering to sudden tight corners needing a deft rear wheel hop to repeated rocky drops and step-downs. All the while cheered on by crowds of local kids who seem to materialize from nowhere, waving the tape which should be marking the stage in their hands for encouragement as you desperately seek out any remaining tape for a clue as to where to point next on this cannonball run from mountain top to distant valley floor. Did I mention we had wanted sublime singletrack? Check. 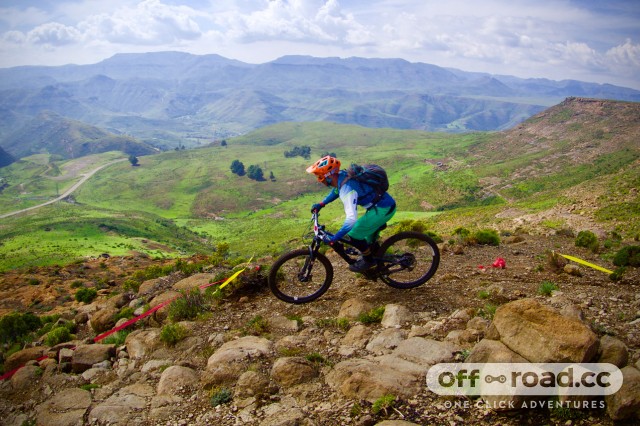 Fast forward another few days to the final stage of the event. More than half of the starters have already DNFd but everyone who is able-bodied is up here to ride the final stage anyway, such is the camaraderie, good humour and simple love of riding running through this event like the diamonds through the local mountains. Once again we’re perched on a breezy bedrock summit and once again there is a scary looking move to access the trail beneath. This time though we’re high above basecamp, within sight of the VéloSolutions pump track built under the #pumpforpeace program. Claudio is even opening the stage for us and it finishes by riding some pallets (sorry, Northshore) over a dry stone wall into a quick lap of the pump track and a big, cold Maluti beer. 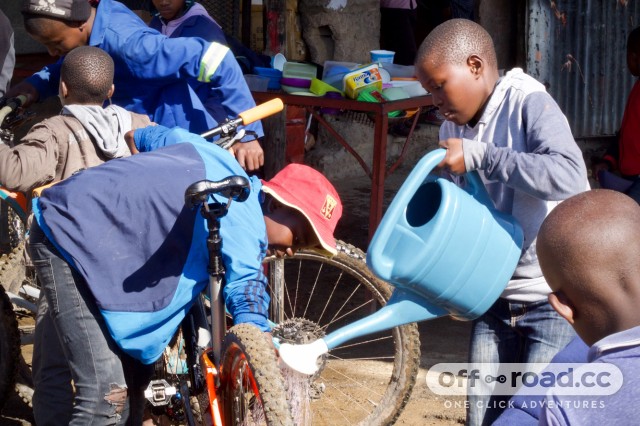 The entire stage seems dotted with cheering locals and the atmosphere as we approach the pumptrack is thick with encouragement. The spot also serves as a youth centre for local kids, many of whom are AIDS orphans, with bikes serving as a vector for helping people through tough times, just as they do the world over. They have turned out in force, not just to cheer us on but also to offer a bike wash in return for a ride on our exotic bikes. 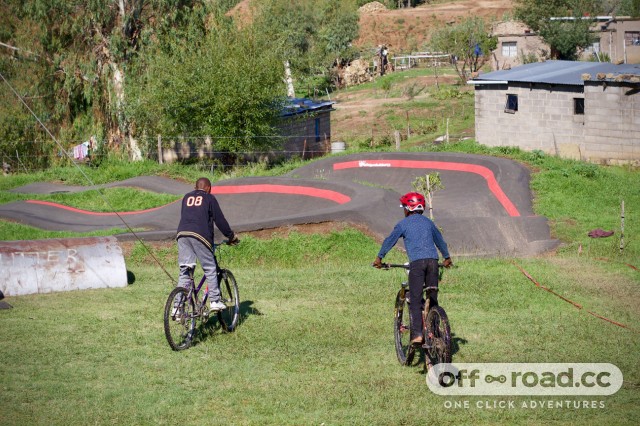 As my trusty Whyte S-150 disappears for an hour underneath three young kids not exactly built for 29ers, I tip back another huge bottle of Maluti beer and talk with the town chief about the good that this event has done in Lesotho. Soon he’ll be presenting us with traditional hats, a feature on the Lesotho flag, as prizes made by an old lady across whose land we rode the day before. We have taken the address of the youth centre’s bike workshop to send all our 26” spares to and we’re generally feeling the community love. 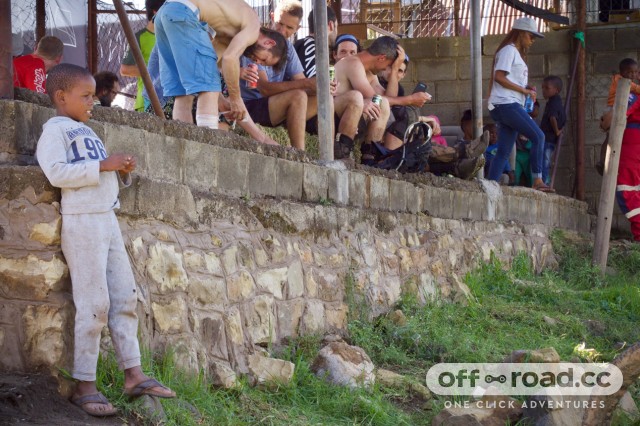 We came to Lesotho looking for good trails, high adventure and something a bit deeper, culturally speaking. The Kingdom Enduro offered us up all that and so much more besides. Put it in your diary for 2020.

Sam Morris is a bike guide and runs riding trips in the French Alps with his company Bikevillage.