Skip to main content
Log In Register
Our Jon pops his gravel racing cherry. And blows his mind. 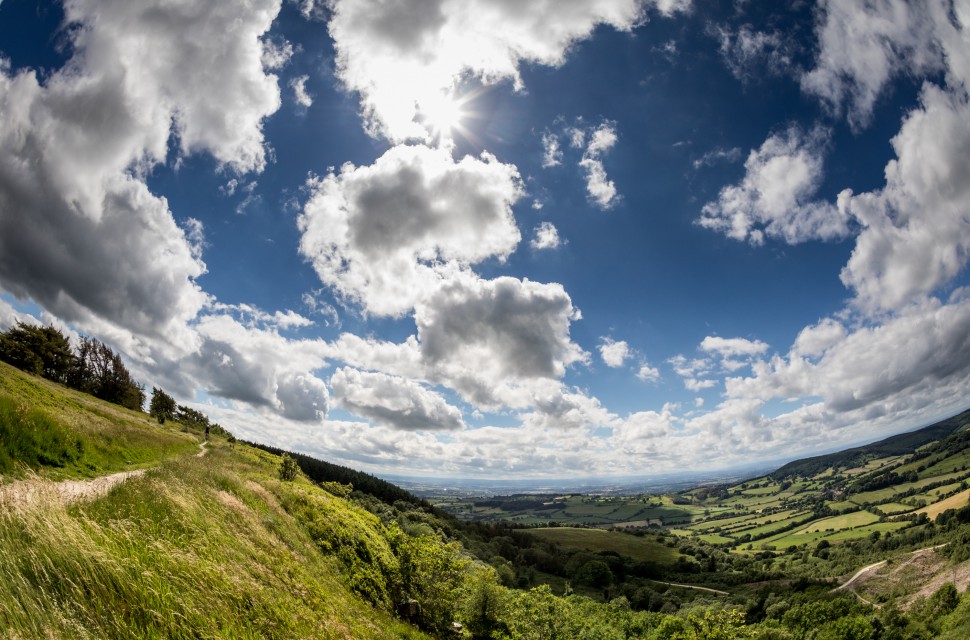 When the organisers decided to name this event ‘True Grit’, it’s obvious they meant business. If it was supposed to be easy then they’d have borrowed the title of a milder bit of film Western for their punning, like ‘Little Gravel Ride on the Prairie’.

Instead what sprung to my mind was the embodiment of a proper Northern John Wayne-alike daring me to pick up my gravel bike - “eee lad, I aim t’kill thee in a minute” - before unloading a six-shooter into me and then spitting on my corpse for good measure. Turns out I wasn’t far wrong. 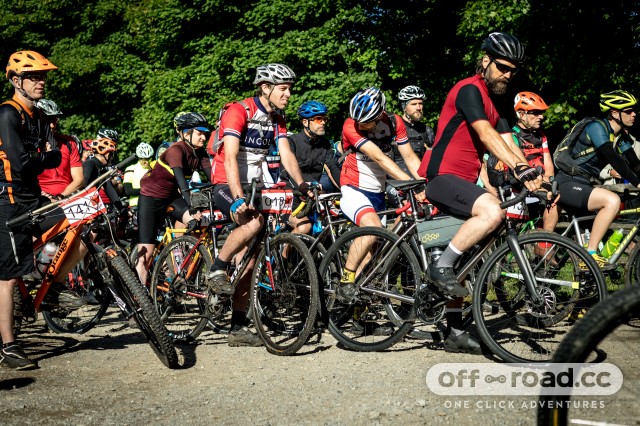 It’s a distinct possibility that this train of thought was down to the four hours sleep I’d had before driving across most of England from Bristol to reach the start line outside of Thirsk in time for the 7.30am sign on.  It’s held up in North Yorkshire and involves a solid 60 miles of off-road riding and around 2,200m of climbing. While it’s pitched as a gravel event, it doesn’t just stick to fire roads, taking in a bit of everything that the rolling North Yorks Moors can offer.

With a pro-athlete breakfast of a McDonalds double bacon and egg McMuffin floated in gallons of coffee and a car with a load of kit hastily thrown into it the evening before, it’s safe to say I wasn’t prepared. While I’ve obviously ridden a bike on gravel before, I hadn’t ridden a gravel bike on gravel before, so I was unsure what to expect. Would it be the endless punishing chain gangs of the road peloton except with extra roughness and choking dust or the individualist approach of a mountain bike ride just on a less suitable bike? 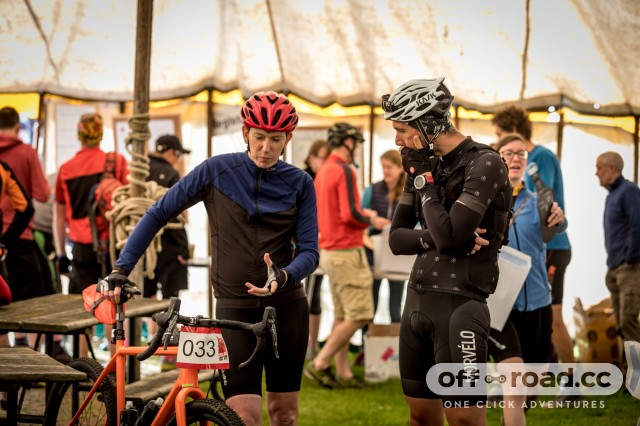 My ride for the trip was a Marin Gestalt 2. At £1000, it’s the middle bike in Marin’s drop-barred adventure road range and neatly hits the mark for people that want a bike that can be used as an everyday commuter as well as going a bit further on the weekend. There’s a single chainring up front with a wide ratio 10pd transmission, 700c wheels shod in 30mm Schwalbe G-One rubber and cable operated Tektro Spyre-C disc brakes. In the run-up to this, I’d been using it as a commuter and the handling was very much mountain-biker-does-road-bike friendly; not too twitchy, fairly upright and generally comfortable and encouraging.

My first order of business - apart from attaching the number plate and some extra storage in the form of Topeak’s new bikepacking luggage - was to change the rubber. Even though the weather was good, I’ve lived in another part of Yorkshire in the past and knew not to trust the skies, the forecast or anything else when it came to there not being rain. The Schwalbe rubber was designed for dry gravel, so I switched on some Panaracer Gravel King Mud tyres that had a bit more bite for muck as well as being slightly larger volume at 35c. I’d brought along some tubeless valves and gunk, because nothing ever goes better than a last minute tubeless conversion, but my eternal optimist was disappointed to find out that neither wheel rim nor tyre was tubeless compatible and I was on a hiding to nothing.

It puts the lotion on its skin 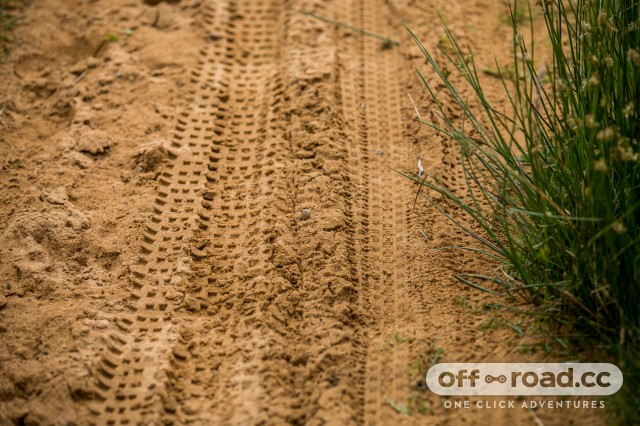 Even so, by the time I’d got dressed, prepared the bike, applied vast quantities of the deliciously tingly  BikeMonger’s Bum Butter and then faffed about some more, the clock had turned 8.30am and I was setting off in dead last place. To be honest, that’s no bad thing as my ego was quickly being boosted by passing people on the first little moorland drag. It was right about then that the headwind that was to be my constant companion for the next 60 miles made itself known. 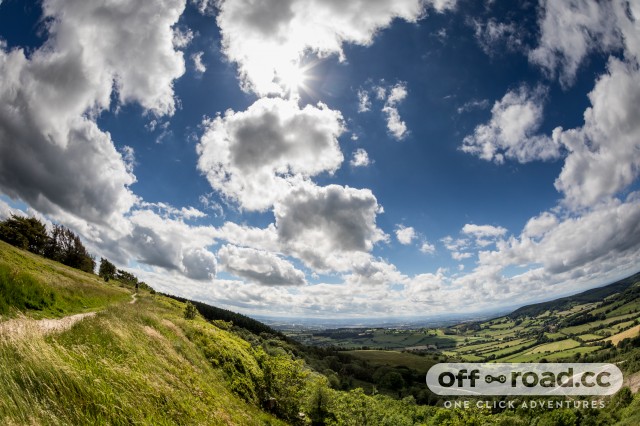 That said, as the first small climb presented itself and keeping up with people I’d previous overtaken became hard work, it struck me that there might be another explanation, one that wasn’t to do with my fitness or the weather conditions. A quick pit stop revealed that my rear brake was now stuck on. A quick fiddle with a multitool and my legs had magically regained all their strength and my hatred of cable discs (better than rim brakes, but only just) was topped up.

To be honest, I was surprised at the technicality of some of the descents. The first one started fast before funnelling everyone into a bog, which made me very glad of the last minute tyre change. More bike maladies arose as the constant pounding started to make my left-hand brake lever move ever further down the drops, which made the already tenuous braking even more interesting. It turns out gravel riding is substantially harder on your kit than the Bristol to Bath railway path, so after tightening and tweaking up all the other bolts on the bike, I was finally able to settle into a routine. 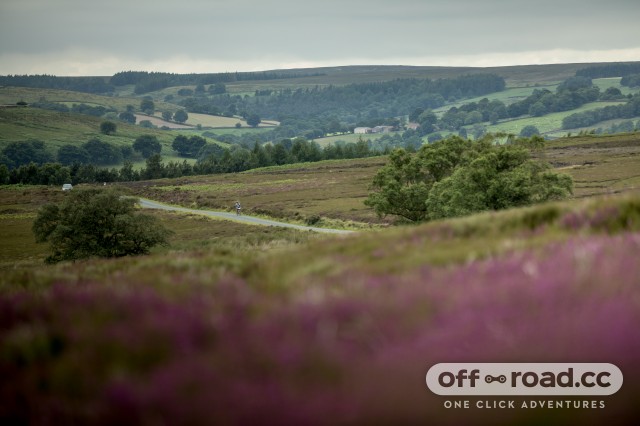 From there on in, the pattern for the day became set. Steep climbs to get up on the moors, beautiful rolling greenery in all directions (plus headwind) as we pottered along the tops, then surprisingly full-on descents before the whole pattern started again.

As the miles crept up, my lack of preparation and shake down rides for the even made themselves apparent. I’d stuffed all the requisite kit for the event into the frame bag, with survival bag, waterproof jacket and so forth, as well as a stem mounted bag for snacks, phone and other essentials. The main issue was that stuffing the frame bag had led to it turning into a sausage that stuck out beyond the top tube, with a velcro strap rubbing my knee on each pedal stroke. I have fairly wonky legs so that’s not surprising, but it didn’t take long for this to get rather red and sore. Next time, I’ll use a saddle pack. 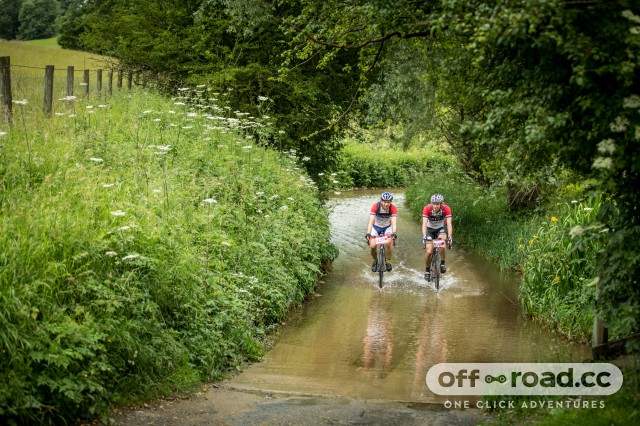 My luggage selection for water was much better however and I can wholeheartedly recommend a fanny-pack - sorry, enduro hip-pack - for gravel riding. With 1.5l of water and webbing to help support the weight, the Source Hipster kept weight off my back but water at easy reach, with no danger of a water bottle getting covered in mud or general filth.

Small issues aside, it was pretty lovely to be out on the moors, just turning a gear over. The weather was perfect as far as I was concerned; not so warm that you get overheated or burnt, but not cold enough that rest stops became unpleasant. I think I prefer the North Yorkshire moors when they’re a bit overcast anyway, they look a bit more moody and interesting as you watch big clouds roll shadow across the landscape, giving the whole place an impressive sense of scale and general grandeur. 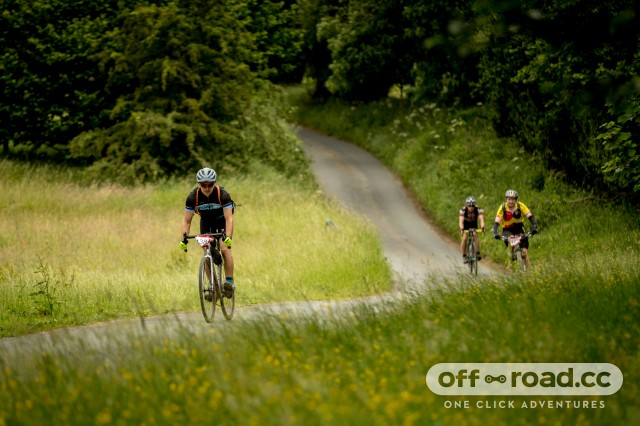 Talking of moody, the halfway point rest stop was a sweet relief after a particularly grinding section of exposed headwind that magically seemed to chase me around no matter which direction I rode. I spent a lot of time riding in the drop just to try and hide but it was of little use. I imagine most bike riders will have felt that the weather has it in for them in a deeply personal way  Feeling tired, a bit chafed and rather sore, all it took was for a nice cup of tea to have me feeling much more positive and ready to take on part two.

That was just as well because it was around then that the headwind died off and was replaced with something much worse, namely the unyielding horror that is Fields That Are A Little Bit Lumpy. I know, it’s not a typical complaint of the off-road rider, with Oh My God That’s Steep death gnar and There Is No Grip Whatsoever And I Might Die off camber root fields taking precedence, but believe me, this was much worse.

With a rather stiff aluminium frame and fork, relatively low volume tyres run at pressure designed to ward off punctures, a single layer of bar tape and a hatred of gloves that have any padding in the palm whatsoever, I was suffering much more on the descents than even the now brutally steep climbs. The temptation to remove my hands from the bars and see what might happen rather than take the absolute beating that holding onto them entailed was strong indeed. 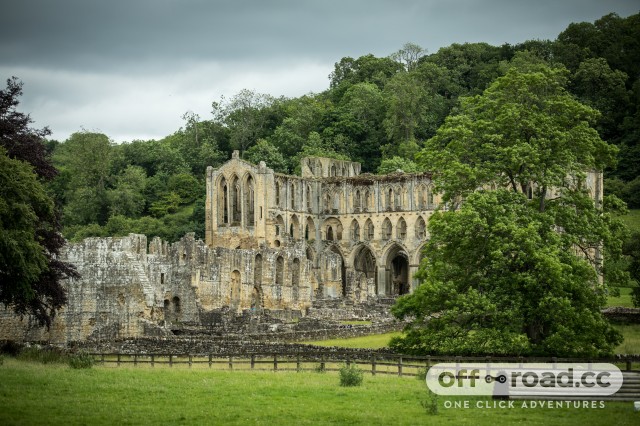 As the miles racked up and I moved from the stunning moor tops to more wooded terrain via some very tasty descents - they’d have been pretty damn entertaining on a normal mountain bike, never mind something with skinny tyres and drop bars - I found a strange yearning for any form of smooth road climb, something I’ve never felt before in my life. Each new descent or flat section would have me pre-emptively wincing about the kicking my palms were about to take. That said, the extended downhill section covered in steps was sheer sadism on behalf of the organisers.

I’d deliberately ridden without a computer of any form as I find it can spoil a long ride and mess with your head when you spend it ticking down miles or expecting to have gone further, faster than you actually had. However, with my claw-like hands close to breaking point, I broke and asked a fellow rider how far we’d gone and to my surprise, the end was indeed drawing nigh. 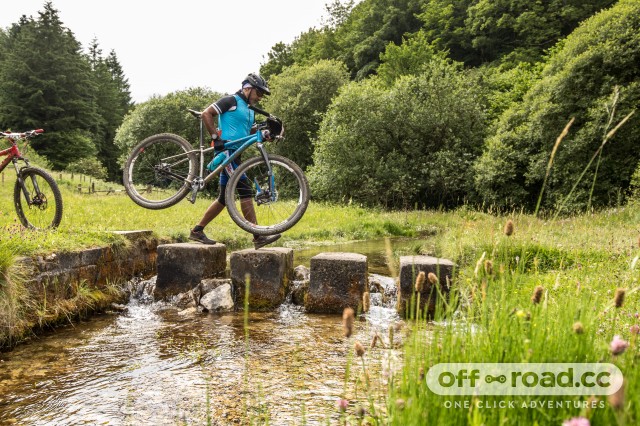 After a rather picturesque river crossing, some more fairly stiff climbing and a light road slog, it was onto some beautiful - smooth - singletrack along a ridgeline. As the fields rolled away ahead of me, the event village came into view. It was High Paradise (Farm) indeed and I felt my legs pick up and start to want to pedal hard again, it was then that the smooth green field in between me and my ultimate destination turned out to be lumpier than a gherkin covered in braille. Internalising my whimpering (for the most part) it was head down, rattle and pedal until some smooth genuine gravel beckoned and led to the finish line. 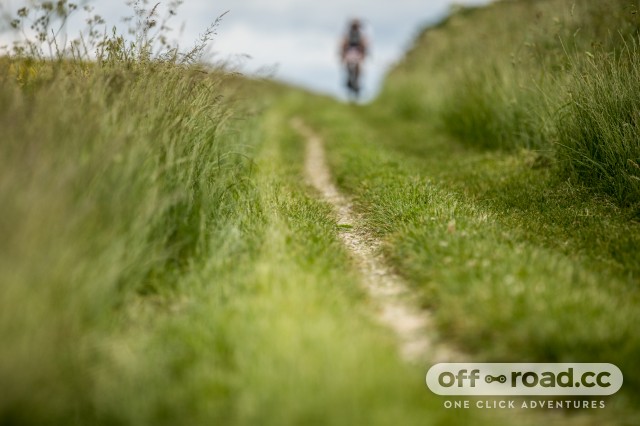 Despite event sponsor Wainright offering finishers a pint of their golden beer - I assume it would have probably been one of the finest tasting pints to ever cross my lips by that point - I had the additional joy of a rather long drive home, so it was some fancy lemonade for me. Sitting on the grass, chatting and fending off the desire to just curl up and have a little snooze, life seemed very good indeed, and not just because it was over, though my bottom and hands were very pleased about that. Was it occasionally Type 2 fun? Certainly. Could I have planned better and enjoyed it more? Definitely. 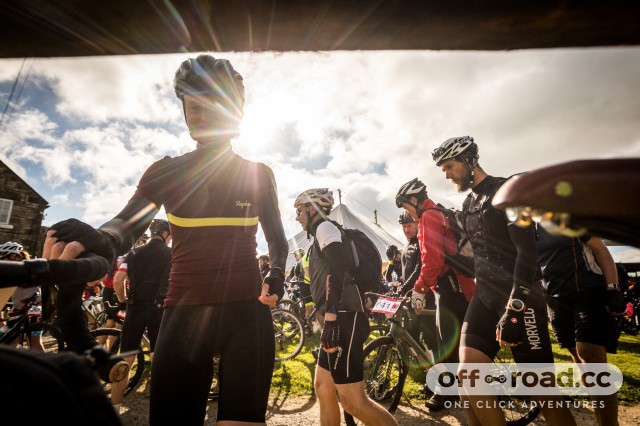 I think next time I’ll take some fatter tyres and an extra wrapping of bar tape, get there a day early to enjoy the camping and have a more relaxed start and it’ll feel like I’ve taken less of a kicking from an angry posse. Of course, I could just do one the shorter routes on offer next time, but how would John Wayne feel about that? He'd be reet disappointed, that's what. 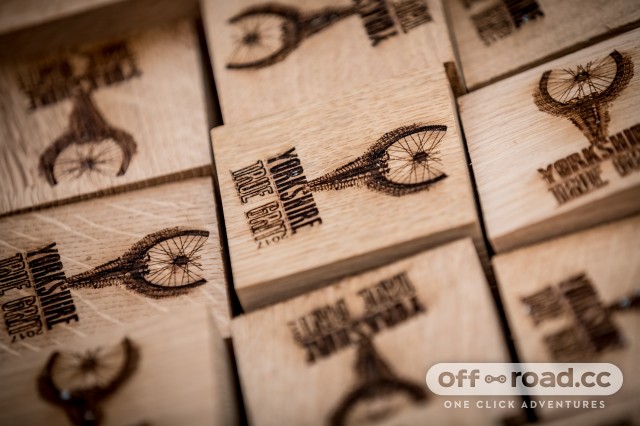 Thanks to the team behind True Grit for the entry and Mick Kirkman for the pictures.