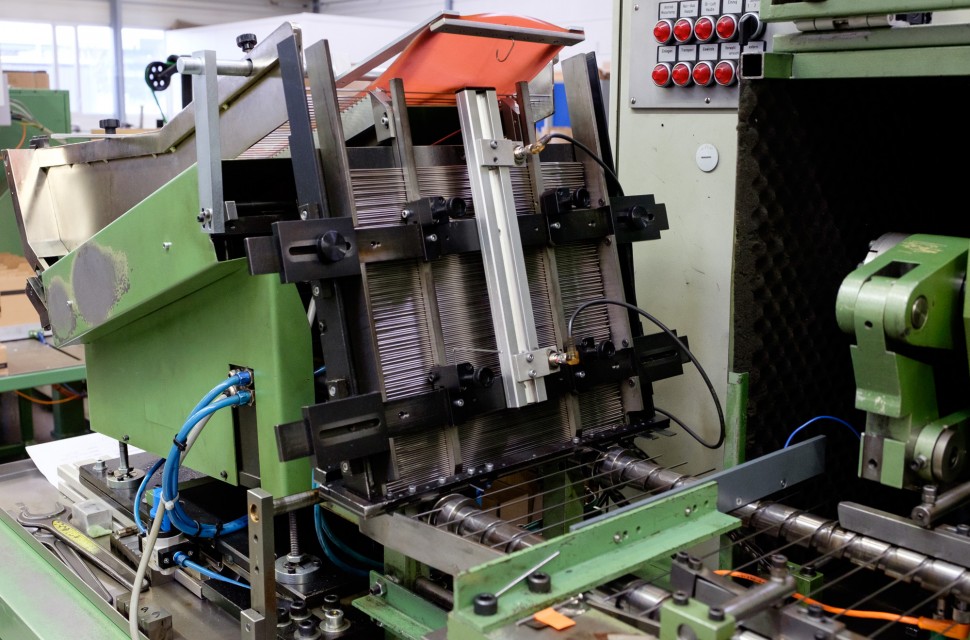 Spokes are a feature of pretty much every bicycle wheelset you can buy and with good reason. They're a lightweight, strong and relatively easy way to attach your rim to your hub - but just how are spokes made? We headed to the DT Swiss factory to find out.

DT Swiss began life as a wireworks and it’s from this origin that it started producing spokes in 1994. Since then there’s been lots of refining and development of the process and now, DT Swiss produces millions of spokes each year. 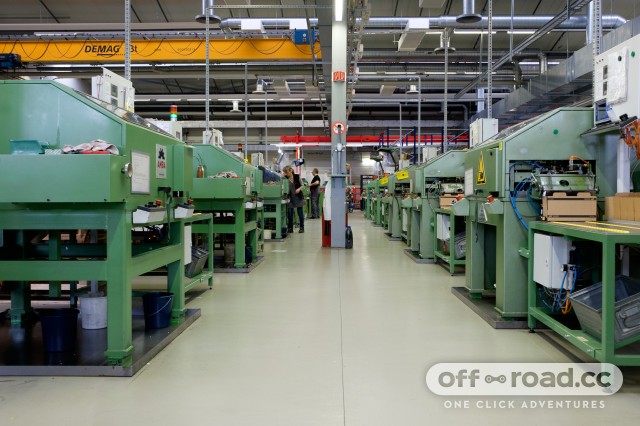 While other parts of the business have moved to Poland and Taiwan, DT Swiss still produces its spokes in the original factory in Biel, Switzerland. Making spokes is a core part of the company, and with the machinery and expertise in Switzerland, it makes sense for the manufacturing to remain here.

The raw material for spokes comes on one-tonne rolls of wire, either 2.3, 2.0 or 1.8mm thick depending on the spoke that is being made.

The spoke material is an 18/10 stainless steel, and we were told that there’s nothing proprietary about the alloy used. Theoretically, if you knew the exact catalogue number then you could go out and buy exactly the same rolls of wire that DT Swiss uses - what is special about DT Swiss spokes is not the base material but rather the processing that is subsequently done to them. 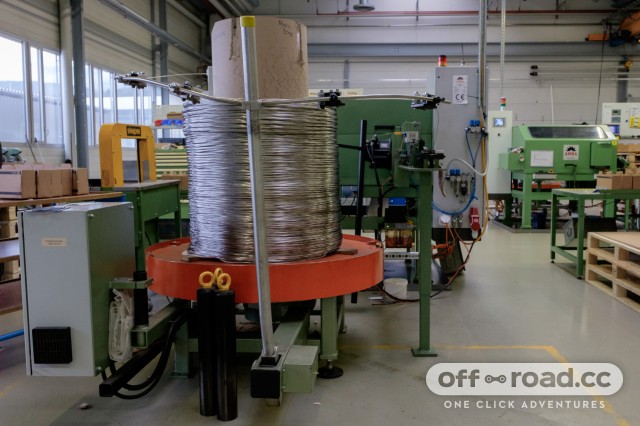 First of all the wire needs to be unrolled and straightened from its ‘packaged’ state. The wire is fed through three sets of rollers to untwist it and is then cut, forming a spoke blank. It’s then ready for the next processing steps. 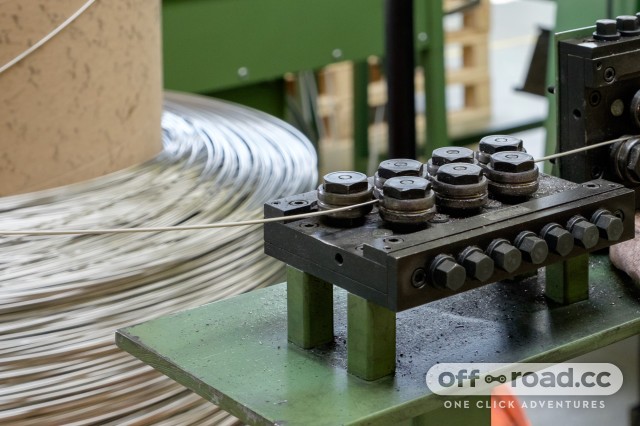 At this point, the processes start to diverge. For the most basic plain gauge spoke the process is actually relatively simple and quick. The wire is fed straight into the spoke making machines and a speedy spoke a second comes out at the other end.

However, the majority of DT spokes are butted (more correct terminology would be swaged) and really, this is where the magic happens. This is also the part of the process that is patented and top-secret. I was only allowed to peer in through closed doors.

Swaging is the process of cold forging the spokes to reduce the diameter. Many people assume that this is to save weight but it’s not the primary reason. Instead, the spokes actually become stronger due to the process. 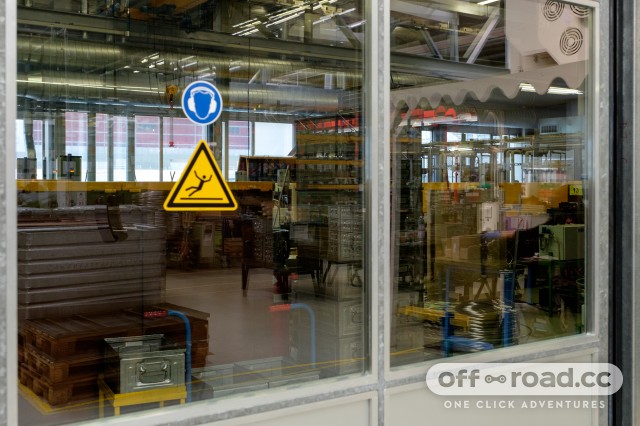 Cold forging changes the microstructure of the metal, increasing its hardness and strength. The plastic deformation i.e. permanent change in shape of the material (in the case of the spokes it’s the reduction in diameter) results in a phenomenon known as work hardening.

In addition, the thinner diameter makes the spoke more elastic in the centre section. Some wheel builders claim this means changes in tension and hence elongation of the spoke are "carried" here rather than at the elbow or threads, avoiding stressing the areas which are especially susceptible to fatigue, increasing overall durability.

Despite trawling through patents, I haven’t managed to find the details of DT Swiss’ process, though I imagine it involves some sort of rotary swager - essentially a hammer which revolves around the wire, compressing it as it passes to reduce its thickness.

In comparison to plain gauge spokes, which can just be churned through the spoke machine, this is a much slower process. The swaging machines are running 24/7 to keep up with demand.

And a spoke is born

Once the spoke blanks are ready, they are fed into the spoke forming machine. 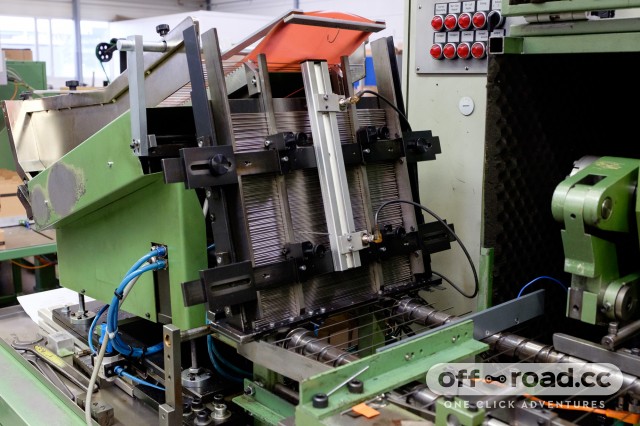 The majority of DT spokes are produced according to the contracts received, so they will run production batches with quantities ranging from a few hundred to a few thousand spokes.

First, the spoke blank is cut to the exact length. The head is formed by a punch and the DT Swiss logo embossed. J-bend spokes are elbowed if required whilst straight pull spokes are left as is. Finally, the threads are rolled. 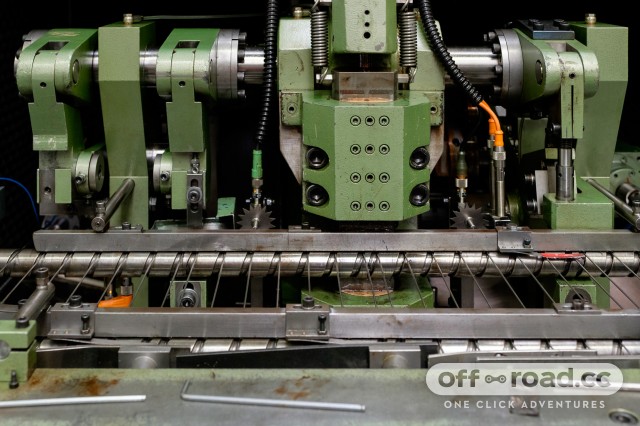 Rather than removing material by cutting threads, rolling threads actually deforms the material. As with butted spokes,  this results in changes in the microstructure of the metal increasing its strength. That’s crucial as threads act as a potential stress concentrator, and hence weak point.

If bladed spokes are being produced, they go through one final step, called flat forging. The spokes are fed into a press and a force of up to 250 tonnes forms the bladed profile between two dies. This cold forming process again cold works the material, further increasing strength. 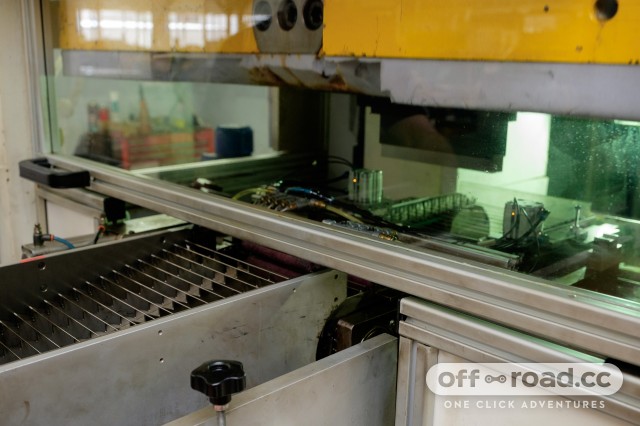 Having gone through all the forming processes, a large portion of spokes are blackened. DT Swiss has recently invested in the machinery and brought this process in-house. That saves it having to send out batches of spokes, and significantly streamlines production and quality control. 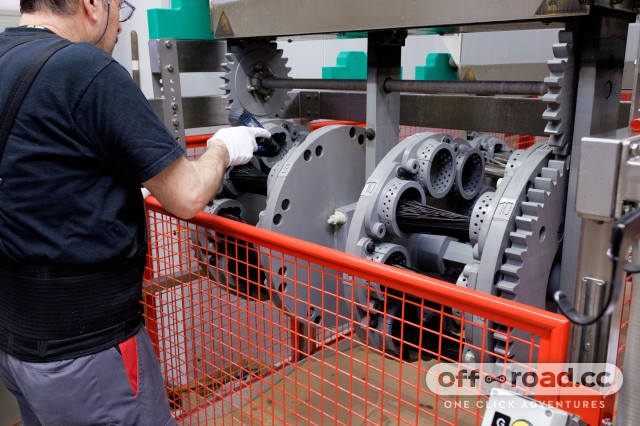 Chemical blackening involves several steps to create a black porous layer on the surface of the metal. This can then be impregnated with oil, sealing the layer and providing additional corrosion resistance. The layer is only about a micrometre thick (around 50 times thinner than a hair) and has no dimensional or weight impact.

Finally, the spokes are packed, ready to be shipped to where they need to go.

Along with producing the spokes, there are significant amounts of inventory management required and organisational business know-how required to keep the machine running. 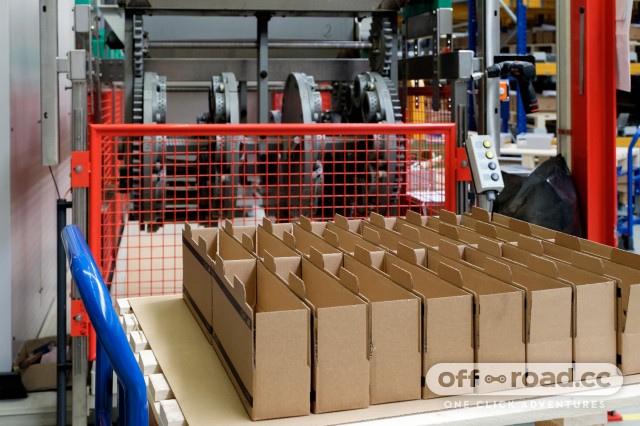 Quality in every step

Going through the factory I was struck by how much manual handling is involved. It’s easy to just dismiss spokes as a simple piece of wire, but it becomes clear that the more processing that is involved the more expensive the spoke becomes.

While the spoke forming is relatively automated, the swaging and blading requires manual attention to ensure everything runs smoothly. 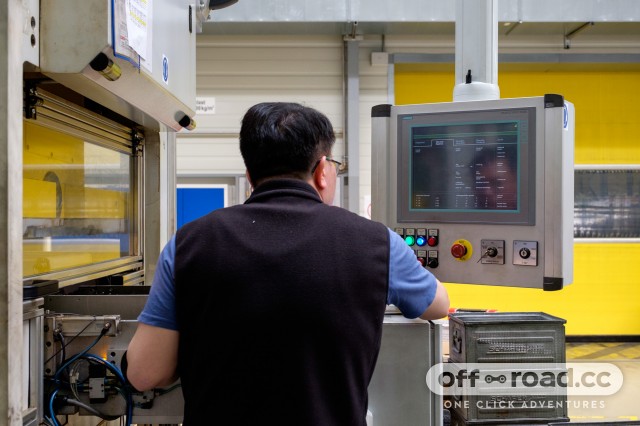 There is also a lot of quality assurance and checking going on. Plain gauge spokes are sampled and checked for tolerances. Higher end spokes, particularly the bladed models are checked regularly as they come out of the press - tolerances within 0.01mm are required.

The raw material and final spokes are periodically tested on a load cell. This allows DT Swiss to check the strength and failure mode and ensure that everything meets specifications.

If you’ve ever wondered why butted or bladed spokes are more expensive it should be clearer now. They simply require more time to make, with more input and processing from the guys at the factory.

Couple that with rigorous quality control and the inherent cost inevitably increases. But that's what is required to ensure a high-quality product. 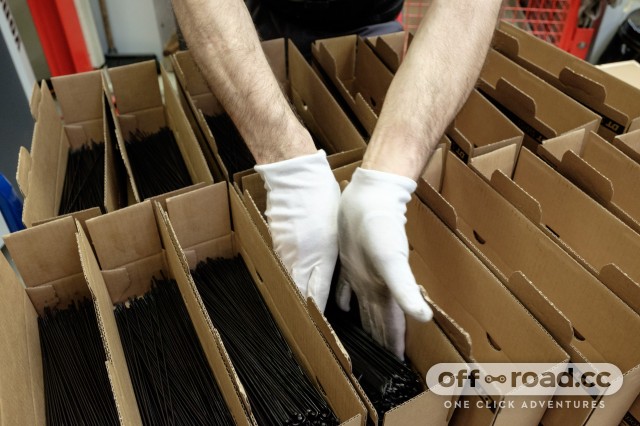 What I find remarkable is how ubiquitous the steel spoke remains today. During my visit, we talked about what the future might hold for these humble pieces of wire.

The fact is, steel is incredibly well suited as a spoke material, with high strength, high stiffness and good fatigue resistance. It can be made with narrow cross-sections which make spokes light and aerodynamic. Despite this, it's impact resistant and standard spokes can easily be replaced if they are damaged. 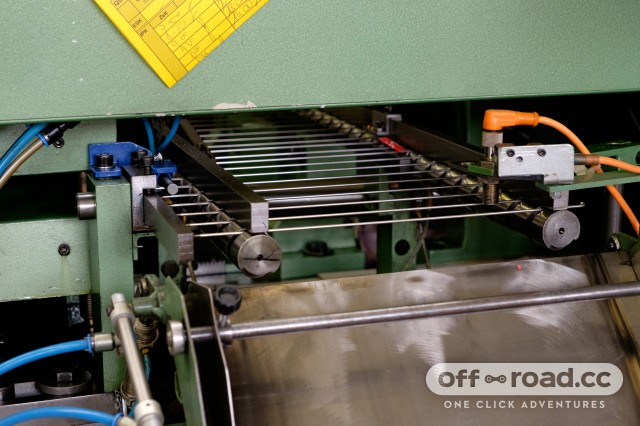 DT Swiss remains convinced by steel spokes and I don't see any reason not to be. Steel is simply the right material for the job in the vast majority of cases.

Aluminium spokes are available on some wheels but I can't help but feel they create more design issues than they solve. Personally, I'm sceptical about any claims of improvement of ride quality.

Instead, you have a larger spoke with potentially detrimental aerodynamic effects due to having to "push" more air out of the way. It's also comparatively difficult to create reliable threads in aluminium - just look at the solution Mavic has designed, with a slide-in nipple that screws directly into the rim.

A steel spoke can be made thin, strong and aero along with the significant advantage of being easy to manufacture and forming reliable threads. It seems like there's no need to reinvent the wheel if you'll excuse the expression here.

While carbon spokes can provide incredibly high stiffness to weight ratios, they are inherently more breakable than steel and often require proprietary methods for attaching the spokes to the hub and rims. They remain the reserve of the very highest end wheels.

Of course that doesn’t mean that DT Swiss isn’t looking at how to improve the spokes they make for the future. It's going to be about incremental improvements rather than anything revolutionary though.

DT continues to look at different material and processing options, though of course, they were understandably cagey about revealing too many details. Improving materials could help improve durability and strength further. 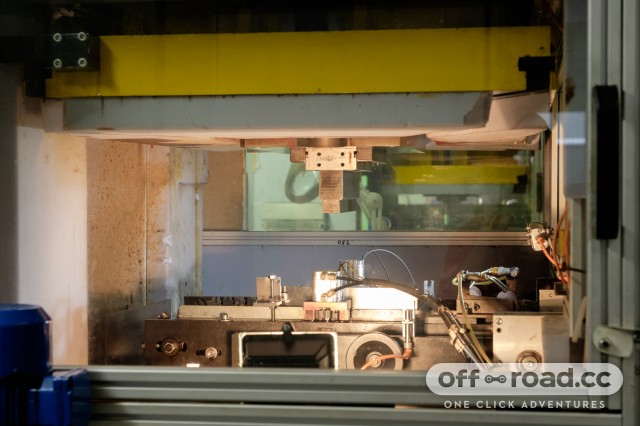 One of the most interesting things we discussed is refining the profile of bladed spokes, as currently they are simply stamped flat. It seems that there is relatively little understanding of the effect of different bladed profiles on the overall aerodynamics of the wheel.

Apparently, it's particularly hard to characterise the rotational component of drag that spokes produce i.e. how much they slow down the rotation of the wheel and this is an aspect that DT Swiss is particularly interested in.

Make no mistake, with all these developments we are talking about incremental improvements, but it's exciting to see that such a venerable and established technology is still at the forefront of performance on the vast majority of wheels today.

There's a certain beauty to the spoked wheel. Those thin strands of wire combine to create a pre-tensioned structure that is far stronger and lighter than might be expected and more than capable of taking its fair share of abuse. We plan to do a detailed look at the science of the wheel and how the structure actually holds you up in the future, so watch this space.

They may just be an unglamourous length of metal wire, but there are millions of spokes out there holding together wheels everywhere. Appreciate the hard work they do for you because they're not going away any time soon!