Flyup 417 well and truly lives up to its name as it's located just off of the A417, overlooking the city of Gloucester. Where many trail centres claim to have something for everyone, Flyup 417 really does as it offers everything from balance bike slalom loops to indoor pump tracks and 50-foot booters.

Flyup 417 has its roots firmly planted in the uplift found at Cannop Cycle Centre at The Forest of Dean. In 2013 Flyup got hold of a 100 acre farm and created 417, the biggest privately owned mountain bike facility in England. 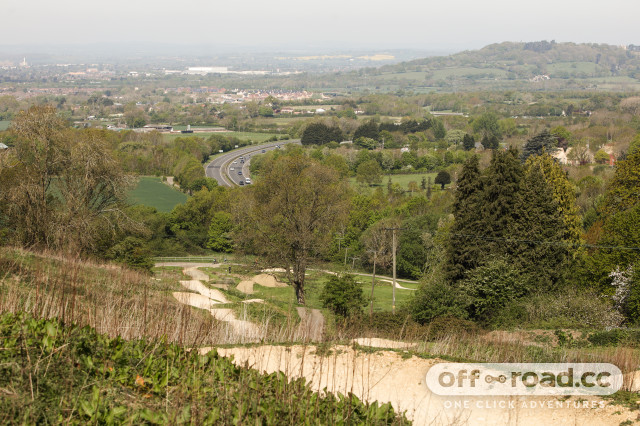 This bikepark is made up of 11 downhill trails, two of which are blue, five are red and four being black, including one double black. Flyup 417 is also home to an indoor concrete pump track, a dirt jump park, a dual slalom track, and a four-cross track.

All of the downhill tracks are accessible by the uplift service which drops you off almost to the very top where you can start part way down a few of the trails, or you could choose to pedal a little further to start those tracks at the beginning. The trails tend to begin a little steeper here, however. All of these trails are also accessible via a push-up path that's entirely separate from the uplift road for safety. 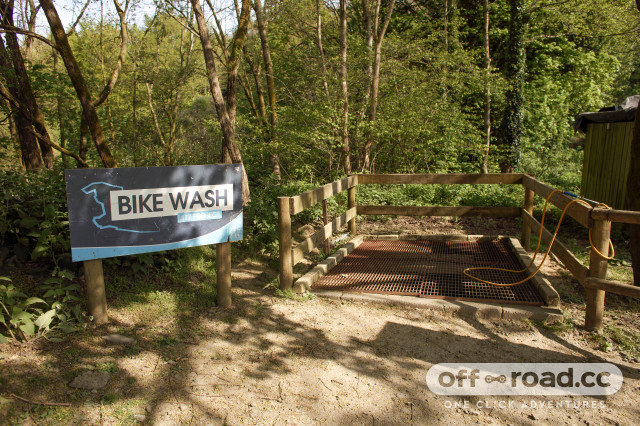 What's impressive about Flyup 417 is the gentle progression that's built across the trails and the kid's groups that are held here. The trails here are generally very flowy and well groomed. The blue trails are free of intimidating features but include berms and easily rollable jumps. Well designed rock gardens begin cropping up through the red trails with bigger but still rollable leaps; it's just the black trails where properly technical rock gardens and big gap jumps can be found. However, those jumps can all be avoided thanks to alternate lines built alongside.

Many of the trails can be tackled aboard a good hardtail though a full suspension bike's squish is definitely appreciated through those technical sections. Flyup 417 is also a great area for e-mountain bikes that are allowed to make full use of the push-up path. Of course, if you're just looking to ride the dirt jumps and/or pump track a dirt jump bike would be the most suitable. Although, if you're going to ride the pump track it's required that your bike is clean. 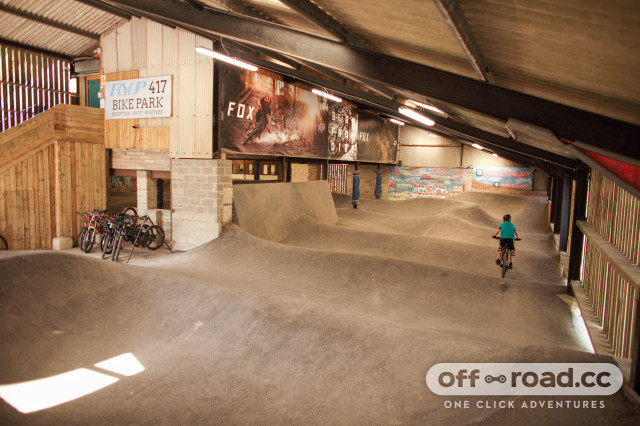 You will need to pay to ride at Flyup 417 and there's a range of prices to suit how you would like to ride. An admission only ticket will set you back £16.50 which will allow you full use of the bike park apart from the uplift. An uplift ticket costs £38 for unlimited use of the uplift. The bike park opens later on Thursday evenings to offer riding from 5:30 to 8:00 pm with entry costing £12 for admission only and £27.50 for the uplift service. For any e-bikers out there, non-uplift fees rise by £2. There's also an annual membership on offer for £40 and that will grant discounts on all services, including the cafe, coaching, the Kids Holiday Club and it comes with a loyalty card where if you buy 10 uplifts, you'll get your 11th free.

Car parking at Flyup 417 is free and not far from the pump track and reception. The uplift is a short pedal away, accessible either by a purpose built cycle path or by riding past reception, through a couple of gates, and by joining the final section of the 'Cheeseroller' trail and turning right at the end. To cycle to the top of the trails, simply turn left on the gravel track before Cheeseroller.

Flyup 417 benefits from all of the amenities a mountain biker could ask for. There's a cafe, a well-stocked bike shop, a tool station at the uplift drop of point, and toilets in the car park. This bike park also offers coaching, kid's clubs and options for birthday parties. There's also a bike wash station located near the car park.

While these are all available on-site, nearby Gloucester is home to many bike shops.

Again, these services are all available at the bike park but if you want to look further afar, there's a lot to be found in Gloucester.

Where you can stay

There is a range of hotels to pick from in Gloucester such as Holiday Inn Express and Travelodge. If you're looking to camp, Star Glamping is an 11 minute drive away.