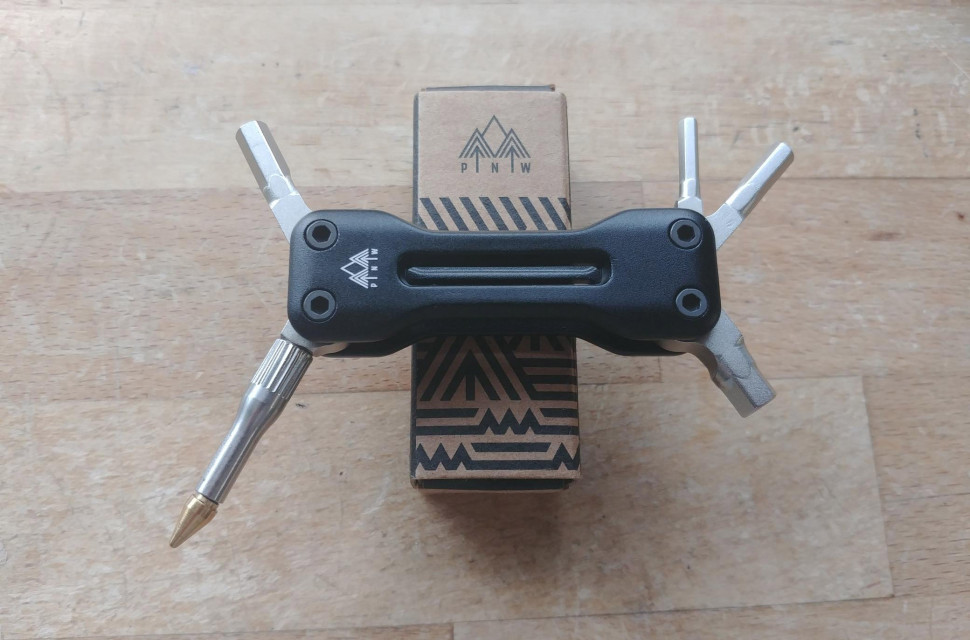 PNW Components Pebble multi tool is a mini tool that packs limited-but-essential Allen bits, along with a tubeless puncture repair solution. It is small but can be fiddly to use and really, it's a bit expensive, holding it back from being one of the best mountain biking multi tool​s you can buy.

PNW Components is rapidly making waves in the bike industry with some super-cool high-quality components at wallet friendly prices. On test here is the brand’s first foray into the tool game, its ultra-compact and ergonomic Pebble multi tool. PNW has opted to keep things simple with The Pebble - rather than cramming in every tool imaginable, PNW has streamlined the tool tally down to just five of what they deem to be the most essential to get you out of trouble on the trails.

This consists of 3, 4, and 6mm hex wrenches and a clever ‘secret’ Torx T25 that's revealed by simply unscrewing the ‘headliner’ of this mini-tool festival - an integrated Dynaplug tubeless repair tool for fast and effective trailside puncture repairs. This is a pretty neat feature to have included in such a tiny multi tool and sets it apart from the competition. 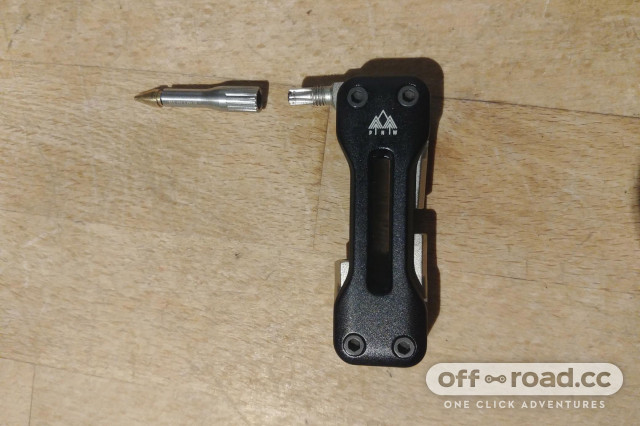 Speaking of tiny, the Pebble Tool truly is a dinky little gadget. At just 65mm x 25mm x 11mm it's barely larger than my pinky finger! It's incredibly lightweight, too, weighing just 51g, and is barely noticeable in a pocket making it a racer's dream. Don't be fooled though, with its stout all-metal build the Pebble tool is as tough as it is tiny and is a proper bit of quality kit. Like all PNW Components products, this is backed up by a Lifetime warranty.

Aesthetically the PNW is a bit of a stunner. As well as the classic Blackout Black I'm testing here it’s available in four other anodised colours - Golden Daze Bronze, Blood Orange, and Fruit Snacks Purple - with its quality finish and clean, minimalist lines it's certainly a classy-looking tool.

A good multi tool is a trail-riding essential, and they tend to fall into one of two camps - the larger and heavier type that sports an extensive array of tools for every eventuality, or the more minimalistic type that values pocketability and lightweight over outright functionality. PNW has set up camp firmly in the latter category - the Pebble is one of the most compact and bijoux multi tools on the market, and with its smooth chamfered form and lack of sharp edges to snag, it’s wonderfully pocket friendly. 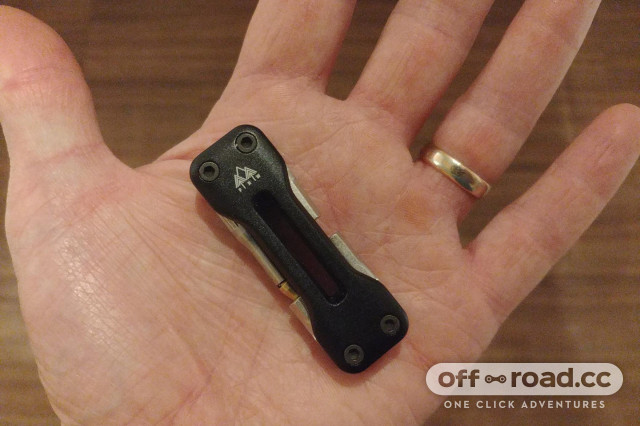 In use, that ergonomic design ensures the Pebble is incredibly comfortable in the hand, although its diminutive size does mean leverage is somewhat limited and I struggled to loosen some more stubborn bolts on a few occasions. I also discovered that due to the size, the tool bits lack the outright length to reach certain bolts effectively - I struggled in particular with adjusting the T25 caliper bolts on my brakes since the body of the tool doesn't allow the clearance for meaningful engagement and I felt close to rounding the bolts on a few occasions.

In all other applications, the tool offers impressive performance proving reassuringly flex-free under load. The tool bits are of high quality too and are wearing very well with no degradation and good close tolerances ensured they offered tenacious bite with no slippage or rounding during testing.

In typical PNW fashion, the brand has incorporated a couple of smart design touches with the Pebble. Firstly, the integration of a reliable tubeless repair system is a revelation and the Dynaplug format is well-proven and a personal fave for quick and efficient puncture repairs. It also means there's no need to pack a separate tubeless repair kit, which saves valuable space in the pack or frame strap. 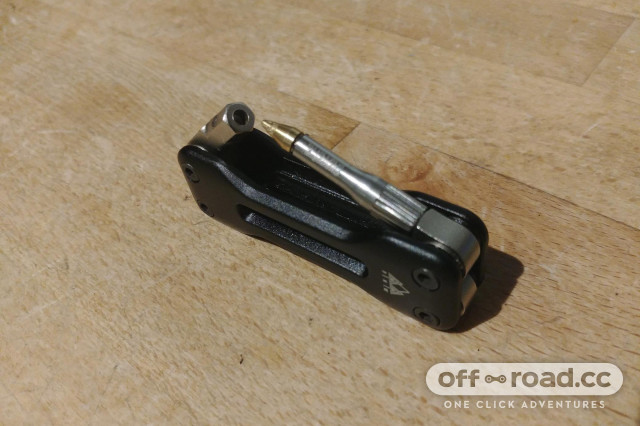 The plug is preloaded in the insertion tool with the metal tip resting in a small indent in the adjacent 6mm hex wrench preventing it from dropping out in the pack or pocket and meaning it's primed and ready to jump into action in the event of a puncture. While this design does keep things secure, without a fingernail groove, prising out either tool can be quite tricky - not ideal in a race scenario or during a downpour where speed is your friend!

The four small pivot bolts can be adjusted for tightness, which helps a little, but too loose and the tool becomes sloppy. A drop of Loctite at the desired level of friction should ensure it remains that way.

The plug insertion tool works brilliantly, although due to its hinged design, you do need to be careful it doesn't fold in on itself when pushing the plug into the tyre. There’s also no means of storing spare plugs on board the tool, just the one preloaded in the hollow-tipped insertion tool. In an ideal world, I would’ve liked to see PNW utilise the negative space on offer in the centre of the hollowed-out body to incorporate some kind of plug storage system. Overall though, it's still a great addition to the multi tool and only a minor grumble.

The other party trick the Pebble has up its sleeve is the stealthy Torx T25 that is hidden under the screw-off Dynaplug applicator. Now, while this makes clever use of space by squeezing in one more function without taking up any additional space, I’d sooner see a dedicated T25 at the expense of a small increase in dimensions, as there's a very real possibility of losing the removed tubeless part during trailside repairs - it’s very easy to forget to screw it back on before shoving it back in a pocket!

The lack of a chain breaker is a shame but is understandable given the Pebble’s minimalist essentials-only design ethos. The same goes for the omission of a 2.5mm hex, a necessity for many lock-on grips, although many brands are now moving to 3mm bolts anyway thanks to their added resistance to rounding out. Also, MIA is an 8mm hex, but in fairness to PNW Components, the Pebble is far too diminutive to create the necessary torque for tightening cranks or pedals anyway.

At £33, it could be argued that the Pebble is a tad overpriced for what is - essentially quite a basic multi tool. There are many more feature-rich tools available for less money such as the excellent Crankbrothers Multi 17 that includes a decent chain tool alongside 2, 2.5,3,4,5,6 and 8mm hex bits, spoke wrenches, flat head, and Phillips screwdriver bits in a lifetime warranteed all-metal build for just £29.99. However, it’s significantly weightier and bulkier and forgoes the tubeless repair ability of the Pebble.

Another option is the Topeak Mini PT30 Multitool at £40, it packs 30 tools into its fairly compact body and is a proper comprehensive portable toolkit. It even features a tubeless plug insertion tool although no plugs are included and there’s no means of preloading them as with the Dynaplug system on the PNW tool. Again though, it's significantly larger and at 168g it’s over three times the weight of the pocket-friendly Pebble Tool.

If you value simplicity and pocketability over outright functionality and tool count, the PNW Pebble might be just the ticket. While not without its niggles, it's still a well-designed little multi tool that features the most commonly required tools for dealing with the majority of trailside adjustments. The added boon of an integrated tubeless repair system from a proven manufacturer only adds to its versatility. While it may be incomplete as a ‘one tool for all’ - you’ll have to pack a separate chain tool for more off-the-beaten-track rides - the Pebble Tool's tactile, barely-there portability means it is more likely to be with you when you need it most.

PNW says - 'The Pebble Tool is a pocketable multi tool, no bigger than your favourite fun-sized piece of Halloween candy, with all the bits to bail you out of your most common biking mishaps without the added weight of feeling like you packed half a toolbox in your shorts. We put great care into defining the exact tools you need, and the ones you probably don’t, when going out for your standard ride. This includes a unique, integrated Dynaplug® tire repair accessory, so when the Flat Fairy visits you (ok, that’s not a real thing), you can quickly patch a puncture if you’re running tubeless.' The tool is aimed at any rider looking for a compact and streamlined multi tool with basic functions and the ability to plug tubeless tyres on the trail.

Solid all metal construction is built to last whilst being incredibly small and lightweight. With its rounded profile the Pebble tool is designed to be free of harsh corners and edges.

The tool bits are of excellent quality but lack reach owing to the compact nature of the tool. The Dynaplug tool works a treat, but accessing it quickly can be tricky due to that smooth edgeless build. The pivot bolts can loosen off with use, but can be remedied with a drop of Loctite.

Quality construction should provide years of service. Tool bits are proving durable with no discernable wear as yet.

At 51g, the Pebble Tool is incredibly lightweight.

The Pebble tool is smooth and tactile tool and is very comfortable to use with no sharp edges to dig in to the hand..

Reasonable value for money, but expensive for the lack of functions on offer, you pay a premium for the inclusion of a the Dynaplug tool.

Pricy. Tools lack reach. Pivot bolts can loosen off with use. Hidden Torx is clever, but having to remove the tubeless tool to access it isn't ideal as it could get mislaid on the trail.

If you don't require a comprehensive multi tool, the PNW Pebble is a worthy choice. Quality is high and having a tubeless repair system on board is truly brilliant.

Based in north Devon, Pete is a true outdoorsman; passionate about all things bike and surf. He's in his happy place pulling into heavy tubes or getting amongst it on the bike! Loves steep natural woodsy tech and big days on the moors in equal measure. Hits the occasional enduro, and although old enough to know better - still has the urge to push himself be it on bike or board! Been riding and racing MTB for over 30 years (Yikes!) and in that time , has gained considerable experience and knowledge of the sport.