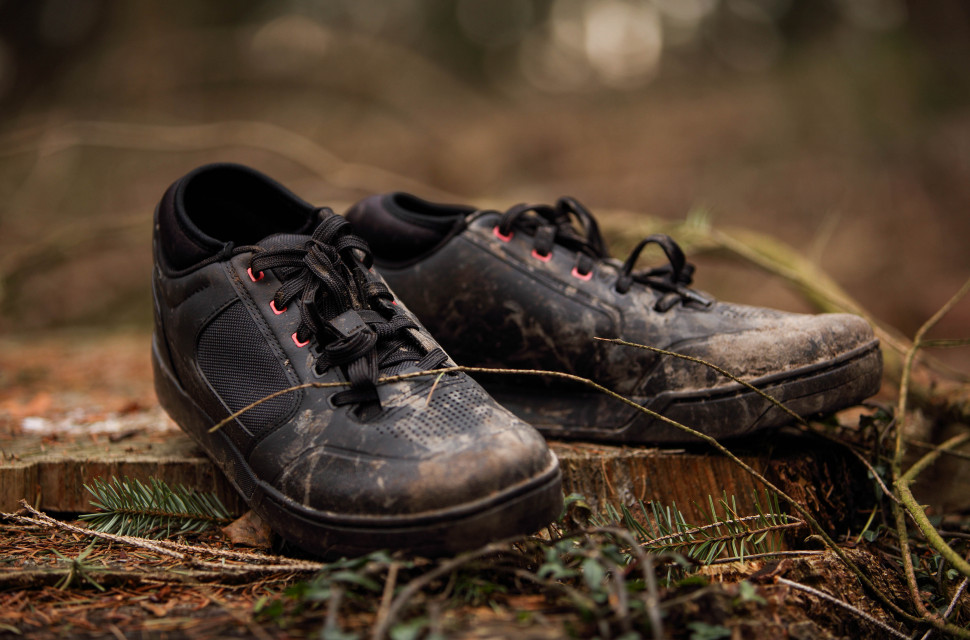 Liam Mercer
|
Jan 26 2022
|
Overall
Quality
Performance
Value
What's good?
What's not?
Buy if...
You're after a great shoe and like to move your feet on the pedals

The Shimano GR9 shoes are built upon a solid foundation consisting of great comfort, extra protection, and a robust build. Though, it comes as a real shame that due to the new rubber compound, the shoe lacks a confident grip on the pedals.

For 2022, Shimano’s GR9 flat pedal shoe has seen a bit of an update. The elephant in the room is that the shoe has ditched Michelin rubber and now runs the brand’s spanking ULTREAD compound with a fresh tread pattern to boot. Along with that, the shoe gets heel and toe protection built into a synthetic leather upper with mesh panels for a bit of breathability. 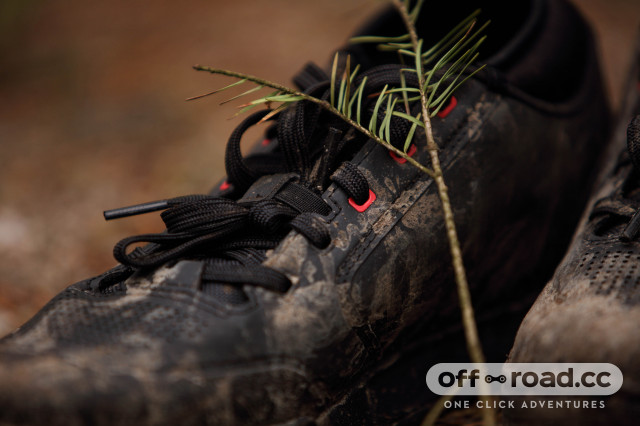 Gone is the speed lacing system and lace shield as Shimano has opted for a simpler lace-up affair. Although, this iteration of the GR9 comes with a neoprene cuff to keep flung debris well out of the shoe. Shimano has also altered the fit to accommodate a broader range of feet and it sits at a 5 in the brand’s stiffness index (a scale from 2 to 12).

The build of the shoe is really nice and lives very much up to its price tag, and as for comfort… That got me really excited. The tongue is lovely and soft, it’s pretty chunky too, which results in a secure and extra comfy feeling shoe. The effects of the re-engineered last are clear too as it’s reasonably roomy, whereas Shimano shoes of old were a little slim-fitting for some. 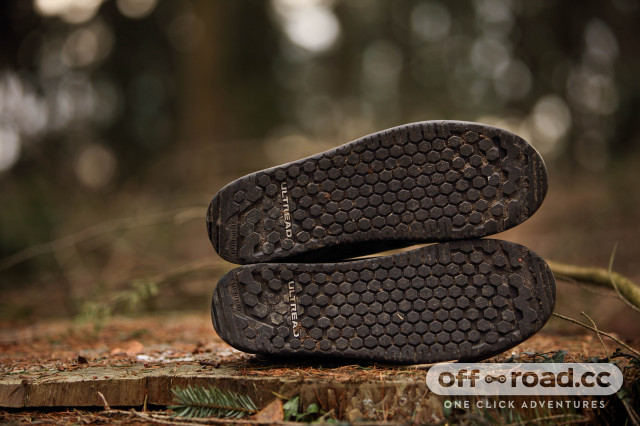 Along with that, there’s a nice convex to the outsole, which makes it rather pleasant to walk in when the time comes. In fact, any time off of the bike, the shoes were reminiscent of a worn in pair of trainers.

The GR9 provides impressive protection from the elements. Stream crossings and quick puddle blasts are shrugged off and while there are cooler shoes on the market, airflow is nothing to be sniffed at. 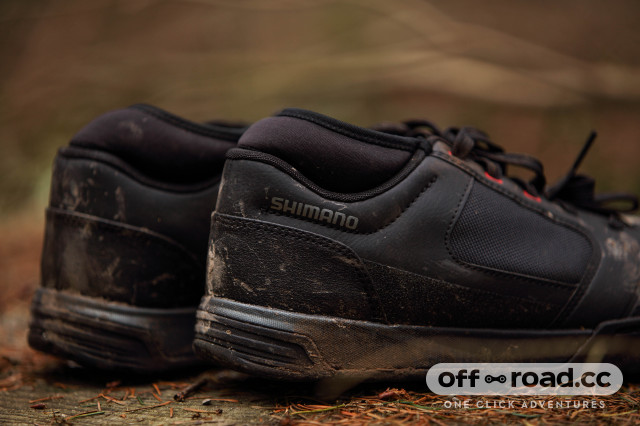 The GR9 was tested on a vast range of pedals, including the old-spec Shimano Saint M828 pedals that all flat shoes get tested upon. While the shoe is massively promising away from the bike, performance dwindles in terms of grip.

Sadly, grip on the pedals is pretty inconsistent. My feet would slip as I descend and bounce as I wrench up techy, lumpy climbs. I believe that this is down to the ULTREAD rubber compound being quite stiff. It doesn't allow a pedal's pins to sink in with as much ease as compounds from other brands and when running pedals with longer pins, it felt very much as if the shoe was on top of the pedal, rather than in. 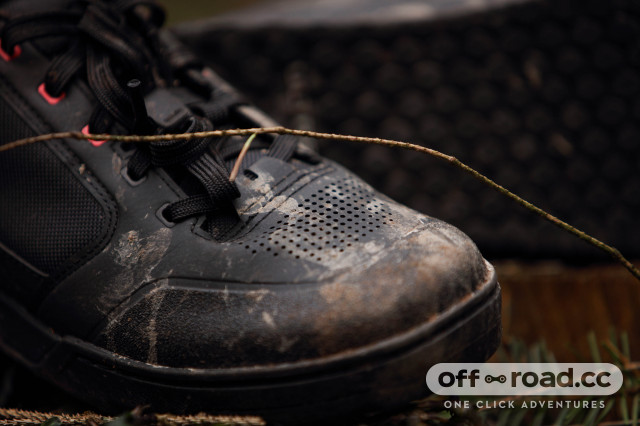 More often than not, I would be trying to shift my feet around to get them back into my ideal position because for some reason or another, they've been knocked out of place. Granted, that's something that happens with many flat shoes and pedals but not near as frequently as I've found with the GR9s. This led to frustration as when descending or ascending, I would be fighting with my pedals and shoes to regain my comfortable spot. 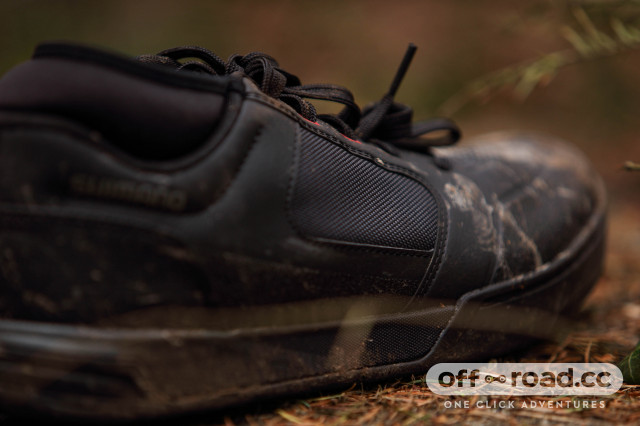 At £140, the Shimano GR9 shoe is definitely getting to the pricier end of the scale. You can save a tenner and get yourself the Giro Latch shoes that offer better grip in an almost equally as impressive package. Then, also at £140, there’s the Ride Concepts Powerlines that offer more protection, a much grippier sole, and a good fit. So, unfortunately, the GR9 looks to struggle to stay afloat in a sea of solid clogs.

If you're after all-out grip, Five Ten's Impact Pro will also set you back £140, making the GR9 even tougher to justify with the Impact's famed Stealth S1 outsole.

The GR9 has gotten so much right that the unfortunate lack of grip comes as a serious disappointment. It's comfy, well-built, breezy and I reckon it looks awesome. However, the stiff rubber compound reduces grip, making it easy to overlook at a price point rife with top-performers.

Shimano says, "FLAGSHIP FLAT SOLE SHOE FOR HIGH-ADRENALINE GRAVITY RIDING IN STYLE". Definitely comes at a flagship price and enough protection for gravity fed riding but grip is a big let down.

Build quality is really nice, no issues with damage or scuffing during test period.

The shoe itself is great, it's comfortable, provides decent weather protection and protection against impact. It seriously struggles with pedal grip, however.

Shows no sign of wear after three months of testing. Stiffer rubber sole may last longer than softer compounds.

466g (per shoe) isn't too shabby for a gravity-orientate shoe.

It sits at a really fierce price point with a range of shoes at a similar price, but many of them offer better grip.

Overall, the shoe is really nice. It's built well, it's comfy and ticks all of the boxes for a good shoe for gravity-fed riding. Though, it has left the 'grippy' box unticked.

A great shoe if you can ignore the lack of grip on offer.