Skip to main content
Log In Register
Five Ten Trailcross GTX shoe review £150.00
A sorted flat pedal waterproof shoe but not without a couple of niggles 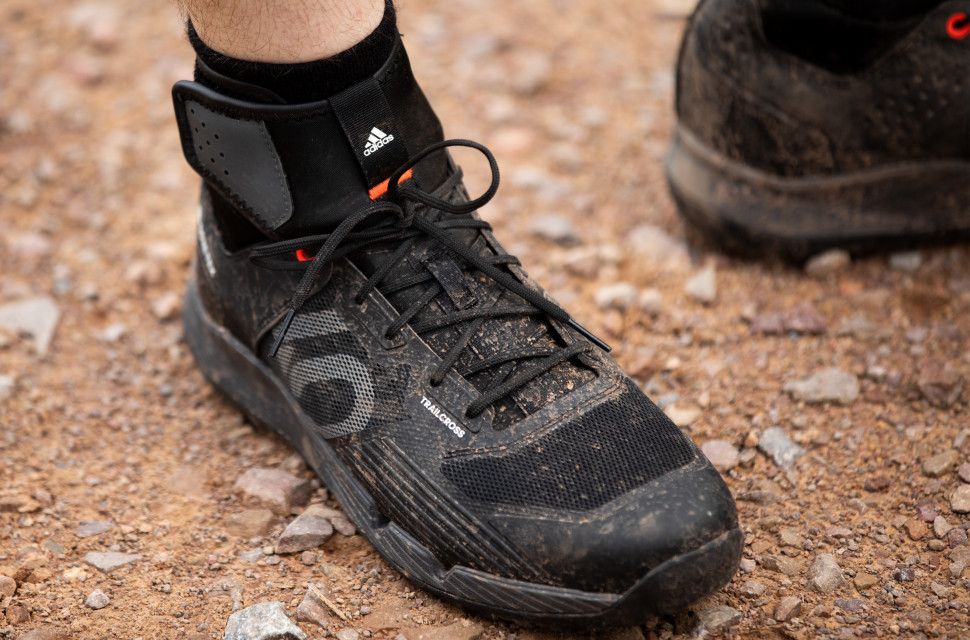 Five Ten has brought GORE-TEX into the fray and has built the Trailcross GTX with a waterproof membrane. It’s a high-topped pedal shoe that’s proven to be comfortable, mega grippy on the bike, and absolutely waterproof. However, the laces have a habit of coming undone, and the sole wears quickly.

The Trailcross GTX from Five Ten is a shoe that pairs GORE-TEX with the brand’s famed Stealth outsole to create a waterproof flat pedal shoe that comes with just as much grip as we’ve come to expect. The shoe features a neoprene collar with a hook and loop closure mated to a reinforced textile upper for stability. Inside, a soft fabric lining offers a smidge of cosiness, with a slim EVA midsole too for comfort.

As the shoe is also designed with hiking in mind, the Stealth outsole has a slightly different tread. We get the dotty pattern that we’ve all come to know and love, but the tread changes to provide grip while walking at the heel and toe.

Sliding the shoe on is a little more difficult thanks to that neoprene cuff, but once on, it proves invaluable, which we'll get onto a little later. The shoe's shape feels a lot more refined than the previous Five Ten shoes I've tried. They follow the foot's contours, narrowing midway then opening up to a rather roomy toe box.

The spacious toe box is a great thing because while warm on a cooler day, there's not an awful lot of insulation built into the shoe. So when things get particularly nippy, there's space to get some lovely thermal socks on the go.

Before we get onto the good stuff, the Trailcross GTX has found itself as a good hiking shoe. Even though the sole is pretty stiff, it has been plenty comfortable enough for most of the strolls that's I've worn it during. However, the first couple of outings with the shoe things weren't plain sailing. I found that where the upper meets the neoprene cuff, it would dig into my ankles. It's worth persisting, though, because there's a clear break-in period, and once things loosen up a bit, the shoe gets a lot comfier. 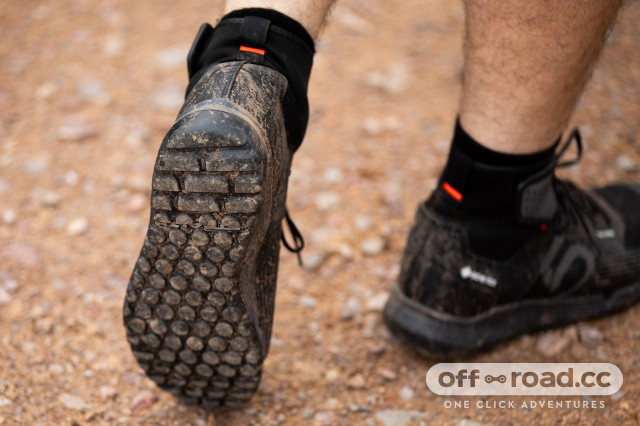 Even though it's a solid shoe for hiking, it seriously shines on the bike, where you make the most of its features. First off, the sole. Five Ten's Stealth rubber is known for being one of the grippiest sole compounds on the market, and that's definitely the case here.

Engagement with the pedals fills every expectation; it's simply solid. Suppose you like to shift your feet on the pedal. In that case, you'll have a tricky time because the rubber is that sticky, but it's not impossible, and once in place, you'll unlikely need to shift it unless you're dabbing a foot.

I have found the sole to show signs of rare fairly quickly though. While I have been riding in the shoe for a few months, markings left from pedal pins are littered around the sole, whereas on, albeit not as grippy shoes, they've been harder wearing.

The GORE-TEX membrane has made the Trailcross GTX nothing but a pleasure to wear during soggy rides as it's well… waterproof. The shoe has remained bone dry inside (ignoring some perspiration) after stream crossings and downpours whilst aboard the bike and even surprise puddles when hiking.

It's on the bike where the neoprene cuff really comes into play as it stops any stray dirt from making a home in the shoe. It even shrugs off spray, enhancing the shoe's capability in the wet. Though, as it is neoprene, it will eventually let water through, but just like a wetsuit, it'll stay warm. 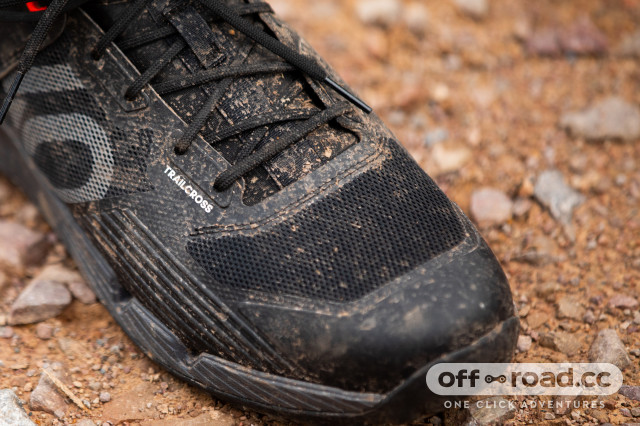 The Trailcross GTX has proven to be a nearly flawless shoe, but I have found a couple of niggles, and those are solely to do with the laces. On this shoe, they’re really narrow and not only do they come undone relatively easily, but when you tighten them down before tying, you can feel them through the tongue.

Then, the shoe could really do with a lace tidy. The laces are pretty lengthy, and there’s nowhere for them to hideaway. This could be the culprit as to why the laces are so eager to come undone but primarily, it would be nice to not have them free to flop about while on the bike. Also, suppose you’re looking for a warm shoe from the get-go. In that case, the Trailcross GTX isn’t massively insulated, so you’ll have to sort yourself for warmer socks if you’re planning on riding through those seriously chilly days.

My latter point there can be seen as an upside, though. It’s not always baltic when we’re riding in the rain, so the level of insulation is left up to the rider.

With very few flat pedal shoes touted, especially for winter riding, it’s tough to find something to compare the Trailcross GTX against, but even when compared to flat shoes, its value is rather middle of the road.

However, I feel as if the shoe justifies its price tag unless you compare it to a good old set of waterproof socks. Though, if you ride a lot through the winter, you may just wear out the soles and have to replace the shoe after one damp season.

The Five Ten Trailcross GTX does everything it says on the tin. It’s waterproof, super grippy on the pedals and pleasant to walk in. Yes, it takes a bit of breaking in, but afterwards, if you can ignore the laces, they become perfectly comfortable. Wider laces, a lace tidy, and a harder wearing sole would only make an already great shoe even better, maybe even perfect.

For me the real benefit isn't dry feet, it's dry boots. If you're riding every day (or twice a day as a commuter) not having to squelch into sopping wet shoes is important. I took to alternating shoes when I was commuting and these signs solve that issue. I also worry about what the constant soaking and drying cycle does to non waterproof shoes.

I've owned mine since September but due to a combination of an op, injury, and COVID they still haven't seen a puddle. Hopefully that will change soon. Will be trying them for road riding too

I bought mine for commuting in rainy Glasgow and they're perfect for that.

Agree about the criticisms:
I went up half a size so I can get two pairs of sock in em to keep my feet warm., but that means thy're not sweaty in what we laughingly call "summer" here (the rain is marginally less cold).
The laces are REALLY thin (I'm surprised they haven't either snapped or cut through the shoes) and they really need a lace tidy because they're too long.