Skip to main content
Log In Register
Cycliq Fly 12 Camera Review £249.00
Large, heavy and with features that won't be of use to off-road users, the Fly12 is better suited to road or gravel rides 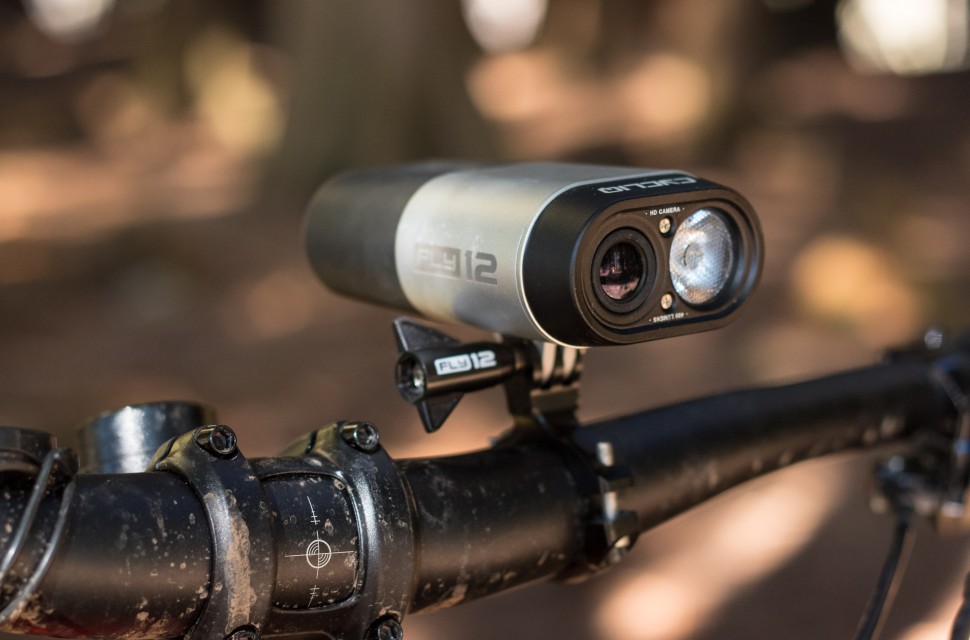 The Cycliq Fly 12 tries to be all things to all men, a light and a camera in one simple package, but where mountain biking is concerned it falls short of the mark in both respects. It’s a road oriented product, more fit for gravel bikes and road excursions where you might need the safety of a light and the back up of a recorded video.

The Cycliq Fly12 is a 400 lumen light and a 1080p video camera together in one fully waterproof case. The light pumps out its lumens in a variety of ways, flashing, solid beam etc and is bright enough to light your way home off-road in an emergency but not really powerful enough to shred the gnar at night time without a supplementary light. The video camera records in 1080p 45fps footage or 720p 60fps and features Wifi, Bluetooth and an app for you to create your Instagram video straight away too. You can also overlay your speed and heart rate data to the video using Strava if that’s your bag!

The camera is simple to use, attach to the bars via the mount supplied, press go and, er, get going – the camera starts recording as soon as you turn it on. Once the camera is turned on, the same button is used to control the light function and then just long hold the same button to turn it off. All the settings of the camera can be changed within the Cycliq App, plus you can review and manage footage here too. 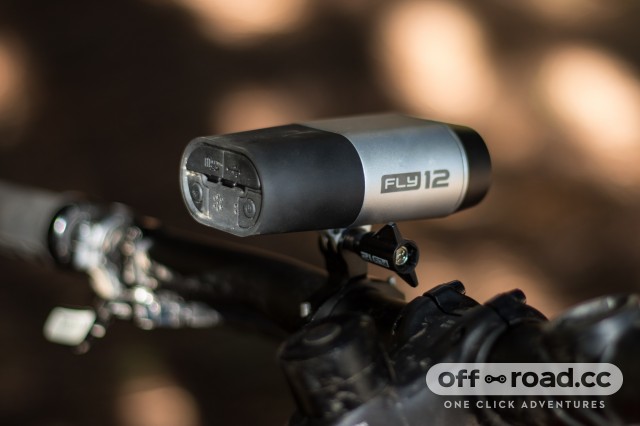 The Fly12 is pretty large and therefore the only option is to attach this to your bars which when riding over rough terrain is less than ideal as the bars move quite a lot. I note that road users mount the camera under the bars but this wasn't an option on any mountain bikes I fitted the camera to as there were too many cables in the field of view. I also experienced an issue where the camera was liable to move up and down at the front by about 1cm, the movement is stiff but was certainly present. I was unable to wind the clamp in any tighter to stop this movement, amounting to some jerking up and down over big jumps or bumps. In terms of weight the Fly12 with mount comes in at 270g, heavy for a camera but not too weighty remembering that there is a front light in the package too. 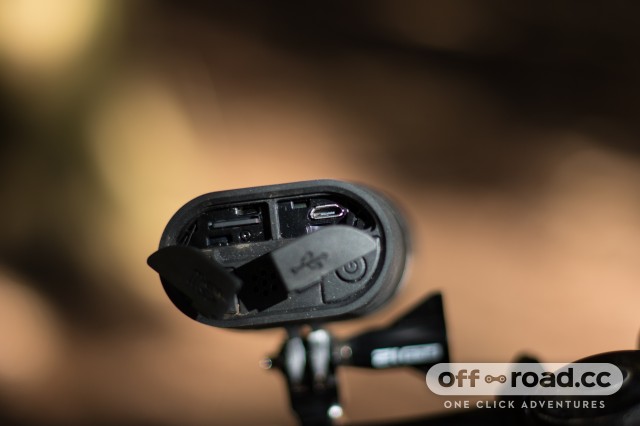 Stopping and starting the camera for individual trails poses no problems but if you did want to record your entire ride, the Fly 12 runs on a constant loop recording on the 16GB memory card, overwriting footage from earlier in the ride. For reference, this size card will begin to overwrite footage at 1080p in a couple of hours. This is ok for road rides where the Fly12 is in use as a safety cover in case you get knocked off your bike by a careless motorist but not particularly useful for mountain bikers. The camera has a neat feature, whereby it automatically saves recorded footage if the unit gets tilted more then 45 degrees during use. This didn’t activate for me, but it’d be interesting to know if some extreme cornering would cause the camera to think there was a ‘crash incident’! The road is the main marketplace for the Fly2 though so we can’t grumble too much about the less than ideal nature of the recording features.

Footage recorded on the Fly12 is of an average quality. We filmed some jumps on a dreary day, typical of any time of year in the UK and found the footage to be adequate but not startling. It’s ok if producing your next Instabanger is your main cause for concern and quality is squashed for the web anyway but if producing high-quality footage for viewing is your aim then this probably isn’t the one, not necessarily due to the camera lens itself, 1080p produces some clear footage but due to limited mounting options. itself On bright days rolling the roads on my gravel bike though, it produces clear footage that isn’t to be sniffed at.

Using the camera at night in conjunction with the light produces some quite good quality footage too, but as you will be able to tell here, I needed to use an additional head light (this one was 1000 lumens) to be able to see properly on more technical trails. The 400 lumens supplied by the light provides enough light to use on the road or fire road happily though.

Post ride the Cyliq app is easy to use to review and edit footage, you can't, unfortunately, add two different clips together here though, you'll have to save them out and edit together, I used Apple iMovie for this. The camera saves the footage twice, once as a low-quality version for you to view in-app and once in high quality, which is the version you will be able to edit and export. 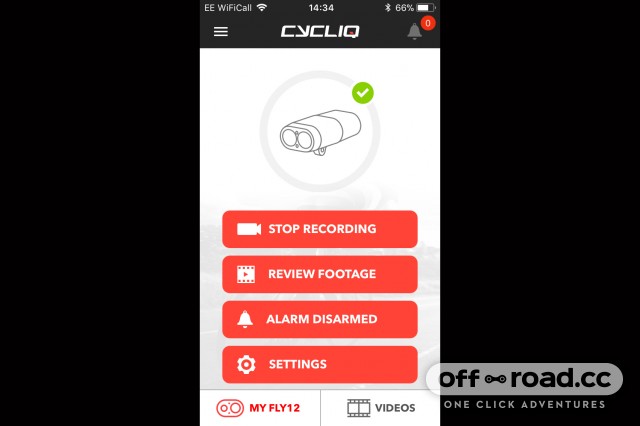 On to the crux of the matter, the Fly 12 is much better matched to a good old gravel grind where catching the activity of errant cars along with the safety of a ‘be seen with’ flashing light is the order of the day. The additional in-app feature of adding tram lines to footage to show how close cars are passing to you is testament to the roadie nature of this device. Smooth roads, handlebar mounting options and recording features suit the Fly12 much more for this than for recording evidence of your local singletrack. 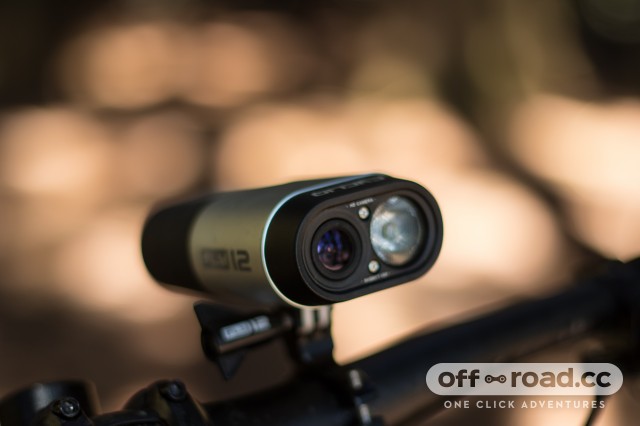 The Fly12 is a difficult one to score, put to a test as a unit for mountain biking, it scores at the lower end of the scale – it’s expensive, the footage isn’t that great compared to a camera only competitors and you probably don’t need an integrated light. Place it on a gravel bike though and the Fly12 starts to make sense, it keeps an eye on you and cars when travelling on the roads in case of any ‘close passes’ and has a good bright light for use in the day or if caught out later than expected in one simple package.

It's worth noting that we have the previous iteration of the Fly 12 here for review, it has since been superseded by a more powerful version, called the Fly12 CE. We have tested this light on mountain bikes and with off-road use at the forefront of our minds, if you want to check out how our roadie friends got on with the camera then head on over to road.cc. 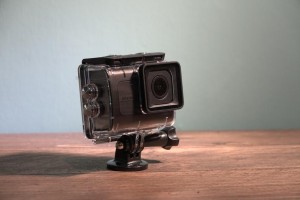 To road and gravel users only

What an utterly cr*p review. The model reviewed has been superceded and it's been tested in an environment it was never intended for. So it's not exactly a surprise it doesn't work too well in this application.

However, for its intended use - roadies gathering evidence of close passes - it works outstandingly well as a number of motorists around Leicester have found to their cost.

Hi, this was provided directly to us to review and we're an off-road cycling site, so it was reviewed from that standpoint - I don't think that makes it a 'crap review' at all. In fact, as Cycliq say it's good for capturing 'action footage' in their blurb I'd say it's pretty bloody useful to anyone that'd seen the good reviews on road cycling sites and wondered if it was worth getting for off-road riding...

What an utterly cr*p review. The model reviewed has been superceded and it's been tested in an environment it was never intended for. So it's not exactly a surprise it doesn't work too well in this application.

However, for its intended use - roadies gathering evidence of close passes - it works outstandingly well as a number of motorists around Leicester have found to their cost.