Skip to main content
Log In Register
Trek Roscoe 9 review £1,250.00
Trek's first go at a trail hardtail hits the mark with a quality frame, balanced handling and well thought out spec plus a fun and lively ride 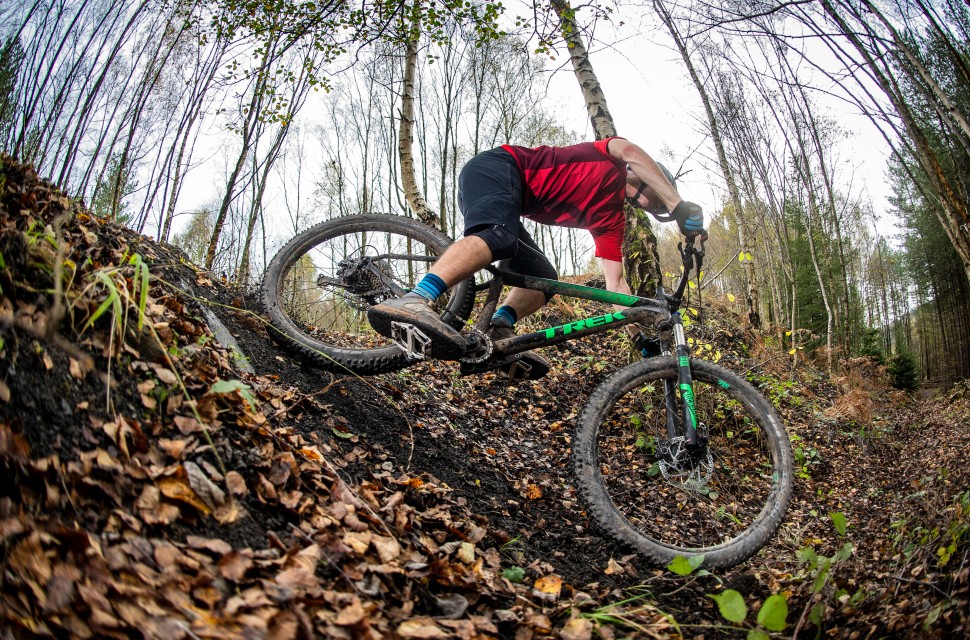 Trek's Roscoe 9 marries an aluminium frame with trail riding orientated geometry to chubby 2.8" Plus tyres on 27.5" rims. While it doesn't jam in as much value as direct sales rivals, it more than makes up for that with a fun, refined ride and coherent kit list.

The Roscoe is a bit of a departure for Trek. It's the first time they've had a serious go at the trail hardtail, with their previous bikes around this money being very cross-country focused efforts. It's also their first hardtail with fat Plus tyres. The Roscoe 9 is the most expensive bike in the range but it shares a shapely frame made from Trek's Alpha Gold aluminium with the other two cheaper models. As it comes with a tapered headtube, routing for an internal dropper post and Boost wheel spacing, that's an entirely positive thing.

Up front, there's 120mm of travel from a lockout-equipped RockShox Recon Solo Air fork. It's not the last word in low weight or bling thanks to the steel upper tubes, but it's respectably stiff and accurate thanks to Boost spacing and the damping can take a good bit of hammer before it loses its mind over repeated big hits. That's helped by the fat 2.8" Schwalbe rubber, which also helps cushion you impressively at the rear end, although the slender, unbraced stays probably help a bit there as well as offering masses of mud clearance. 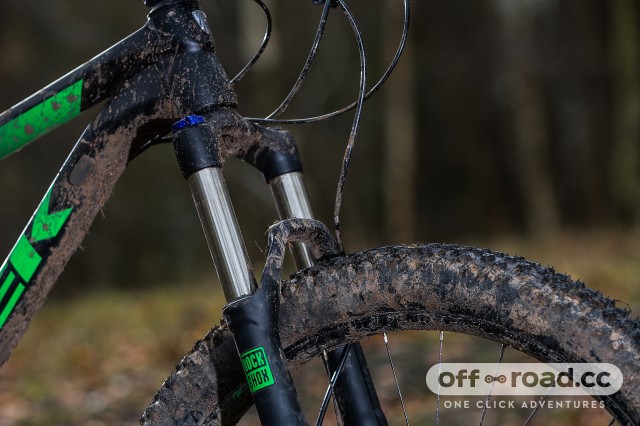 The tyres are mounted on 40mm internal width Sun Duroc SL rims. They've proved to be durable while I've been testing the bike and, while they don't come tubeless ready, it is possible to convert them with a kit that's available separately and the Schwalbe Rocket Ron rubber is ready to go from the off. The hubs both use sealed bearings and come with Boost spacing, though as there's a standard quick-release axle at the rear, that gets the rather confusing Boost 141 moniker rather than the more familiar Boost 148 naming of 12mm through-axle equipped bikes. 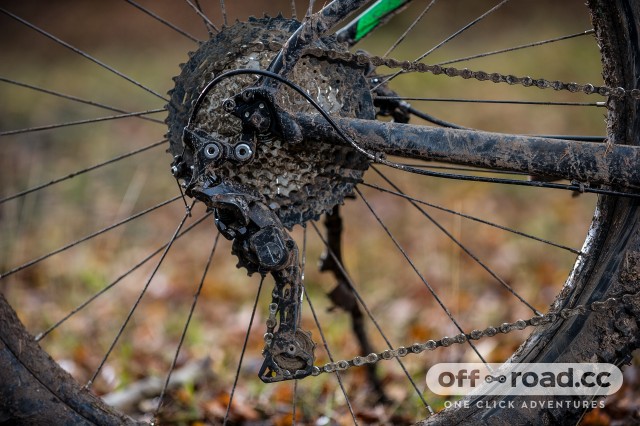 The drivetrain is a dependable mix of Shimano's 11spd kit, with an SLX shifter and wide-range 11-46T cassette with the theoretical sweetener of a clutch equipped XT-level mech, not that it makes much difference in practice. That's paired with a set of Race Face Aeffect cranks with a nicely matched 28T direct mount narrow-wide single chainring. From experience, the Shimano kit shifts more smoothly if less quickly than SRAM's gear and it's very durable in the long term too. The big jump in ratios between the biggest 46T cog on the cassette and the next one down is very noticeable when compared to the more even steps of SRAM's 11spd cassette, but I did find myself compensating over time. 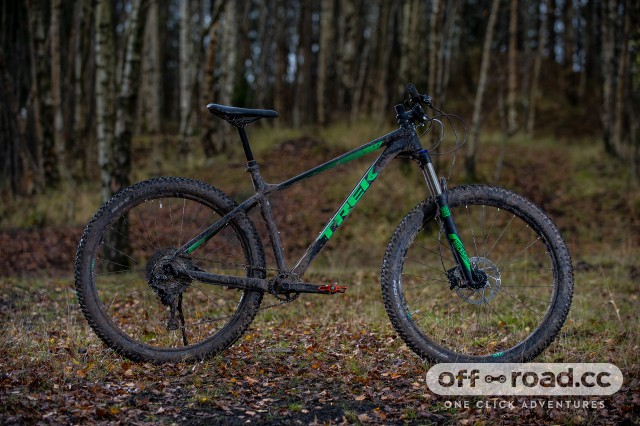 Elsewhere on the bike, there's finishing kit from the Bontrager stable, which is no bad thing. The 750mm wide low rise handlebar is a good shape and while the 60mm stem isn't exactly super-progressive, it's not too rudder-like and can be easily switched if needed. A really welcome bit of spec is the Bontrager dropper post. It might only have 125mm of travel but that's generally enough to get it out of the way on descents and it's internally routed, so there aren't any cables flapping about. This test one has stayed solid and the remote is really pleasant to use, but I have had mixed results with reliability in the past, however.

So how does the Roscoe ride? 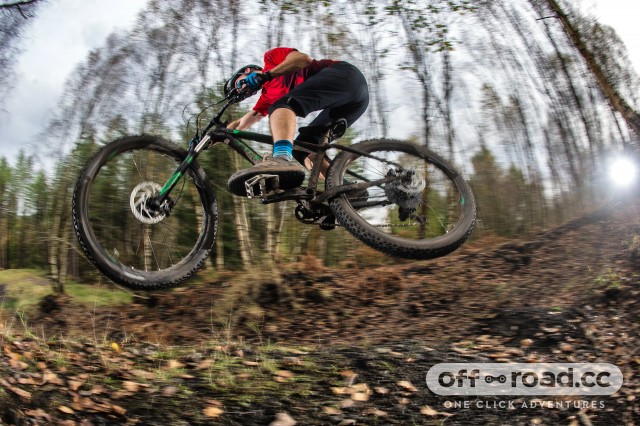 While the Roscoe is definitely more trail orientated than Trek's other mid-priced hardtails, the geometry is still fairly conventional, with a 68.3º head angle on the 51mm offset fork. At 71º, the seat angle is pretty damn slack by modern standards, which does mean you have more weight over the rear wheel when sat on steeper climbs. The relatively short 100mm headtube keeps the front end low, while the bottom bracket drop of 58mm gives a nice low slung feel in the corners. I'm 173cm tall but I had enough standover to ride a 19.5" frame, which gave a reach of 438mm. That's not hugely spacious, but in combination with the slack seat angle it means you get a decent effective top tube length when sat down, so there's decent enough breathing room when pedalling on the flat.

That said, when you're riding the Roscoe, it really doesn't feel too cramped. It's no super slack aggro machine, but you can maintain a fair lick of speed on techy and steep trails without it all getting sketchy too quickly. Okay, it's definitely a rolling singletrack and trail centre machine rather than a steep and technical smasher such as Whyte's slacker and longer 900 series hardtails but it's still capable and competent with a lively, agile feel that'll satisfy all but the most hardcore shredders. Despite the 13.6kg weight, it actually rides like a much lighter bike, which I'm guessing is largely down to the bump smoothing, undamped and speedy rolling rubber. 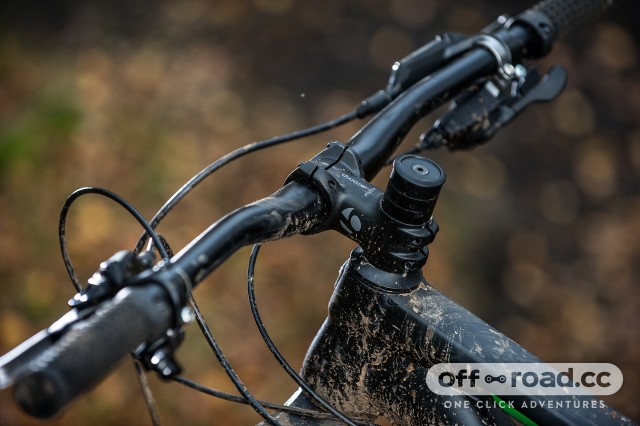 In muddy conditions, you can reach the limits of the fairly shallow tread of the Rocket Ron tyres, but a 50a rubber compound means they're not too sketchy on wet rocks and roots. As with all Plus tyres, getting the tyre pressure is critical as one or two psi the wrong way makes a big difference. Too high and you'll have little traction and get pinged all over the place, too soft and the carcass will roll a disturbing amount when cornering. Get it right - I'd suggest buying a digital gauge to make sure you do - and you get a good mix of comfort and traction with acceptable precision. The casing is pretty light so serious rock-smashing abuse will end badly, but by that point, you'll have probably shaken your fillings out due to the lack of spring at the back anyway. It's always worth remembering you can pop in a set of 29" wheels and tyres should you wish as well. 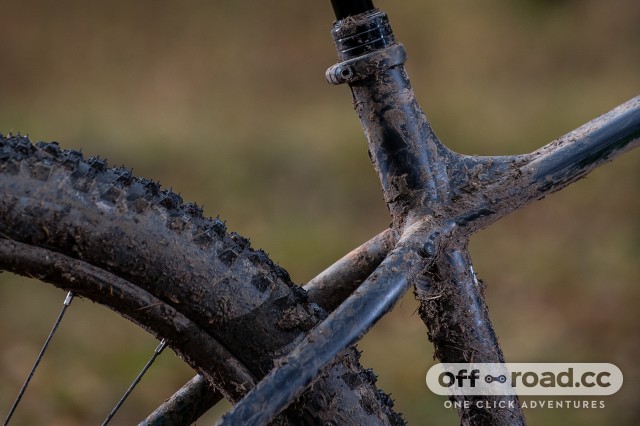 The bike has got fairly basic Shimano M365 stoppers. They do an acceptable enough job thanks to a 180mm rotor up front in addition to the 160mm item at the back but the four-finger lever is a bit clunky and lacking in feel compared to higher end stoppers in the Shimano catalogue. You're limited to fast wearing resin pads rather than more durable sintered versions too. 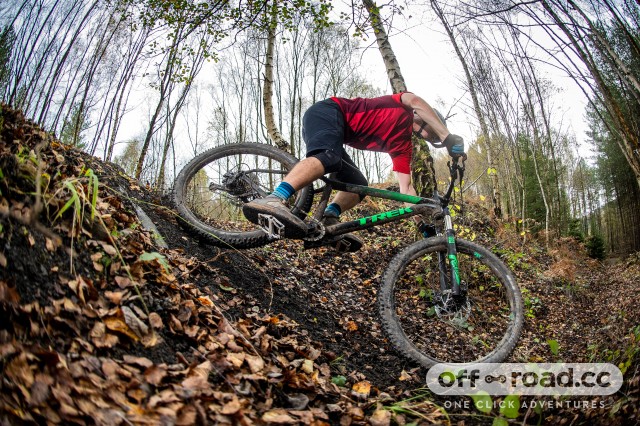 Minor grumblings aside, Trek has done a very good job with the Roscoe 9. The geometry strikes a good balance between traditional and twitchy cross-country machines and more aggressively angled trail bikes that'll suit people that don't just want to slog out the miles or chuck themselves down the silliest stuff they can find. If that sounds like it's a bit of a Jack of all trades, then yes it is, but that'll suit a lot of people.

When it comes to the kit bolted to it, even a massive company like Trek struggles to match the value direct sales brands can offer, but it's a credit to them that there are very few missteps and everything works coherently. Having a dropper post, smooth drivetrain, decent rims and a well-controlled if hefty fork on a quality frame means it works well out of the box as well as being a good place to start upgrading affordably as needed. If you want a fun, all-round trail hardtail without breaking the bank, the Roscoe 9 hits the spot.

Trek say: The Roscoe 9 is our top-end 27.5+ trail hardtail. It's a fun-loving ride with high-performance mountain bike parts that are ready to get rowdy. The mid-fat tyres and burly suspension fork with 120 mm of travel offer an extra dose of confidence to any rider on any trail.

It's on the conservative side compared to the likes of Whyte, but relative to Trek's previous mid-range hardtails it's positively progressive. They've played it pretty safe and it'll work for everyone except for the most balls-to-the-wall shredders.

Nice features including neat external cable routing for everything but the rear mech, masses of mud clearance.

Yeah, it's a fun little singletrack machine with plenty of pop and good manners on everything except the really steep stuff

If I was after an all round machine, I'd be tempted

Yeah, as long as they weren't an absolute hooligan