Skip to main content
Log In Register
Stevens Sonora RX review £2,105.00
A purebred XC bike that is capable whether you want to race it or go exploring 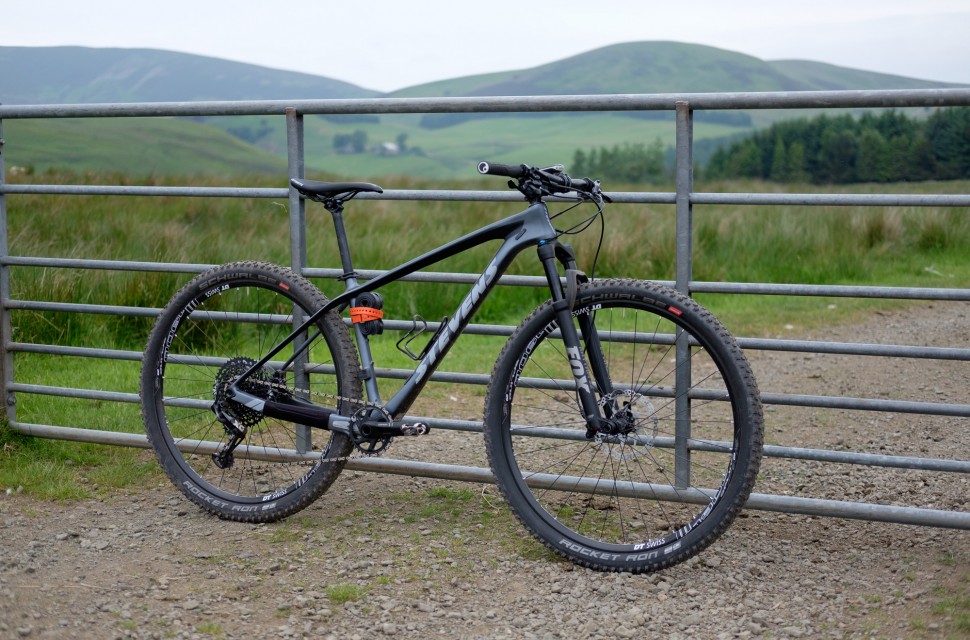 Benedict Pfender
|
Oct 17 2018
|
Overall
Quality
Performance
Value
What's good?
What's not?
Buy if...
You're after a top-performer that isn't one of the established big brands.

The Sonora RX forms part of Steven’s high-performance carbon cross-country bike range. We’ve been putting some long distances on this machine, and whilst it’s unashamedly a traditional cross-country machine, that actually makes it a very versatile bike.

This mid-range model offers a solid spec, capable ride and a decent package for the money. Equipped with a modern 1x drivetrain as well as a Fox fork, it can keep up with the best of them. Some foibles aside, it’s a very capable piece of kit. 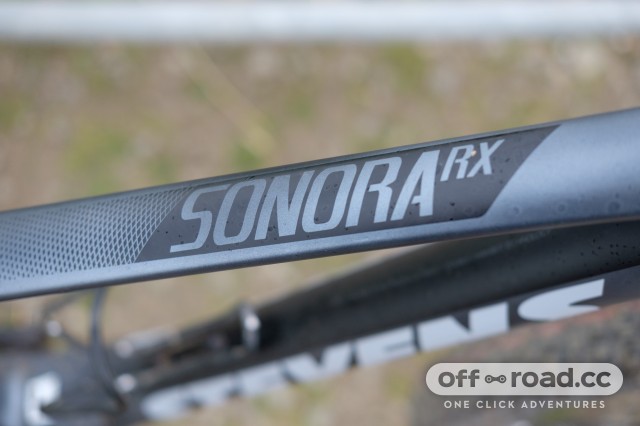 The Sonora makes a very good first impression. The unassuming silver/grey paint belies the svelte, well-finished carbon frame underneath. I rather like the understated looks, which are complemented nicely by the smooth lines and flowing curves of the carbon construction. It's a nice piece of engineering.

I’m a particular fan of the slender seatstays that not only cut an elegant line, but I think, contribute to the overall comfort of the bike with sufficient flex to take the sting out of the worst impacts. 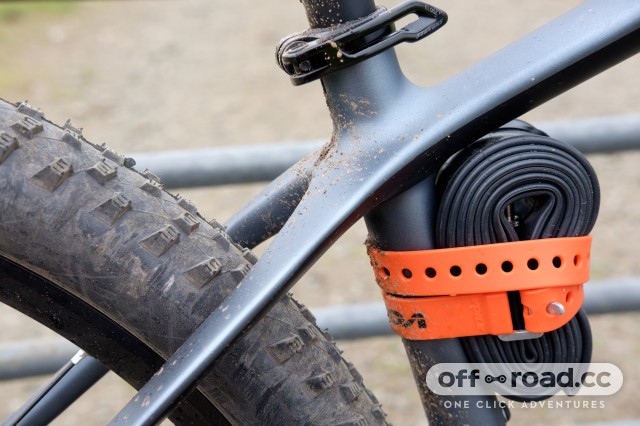 The chunky bottom bracket area and chainstays contribute to efficient pedalling and the lateral stiffness of the frame results in excellent steering precision that really lets you scythe around the corners.

Whilst you’ll find modern features like Boost spacing and internal routing, the frameset still caters to the curious 2x predilections of the Europeans should you wish to run multiple rings up front. 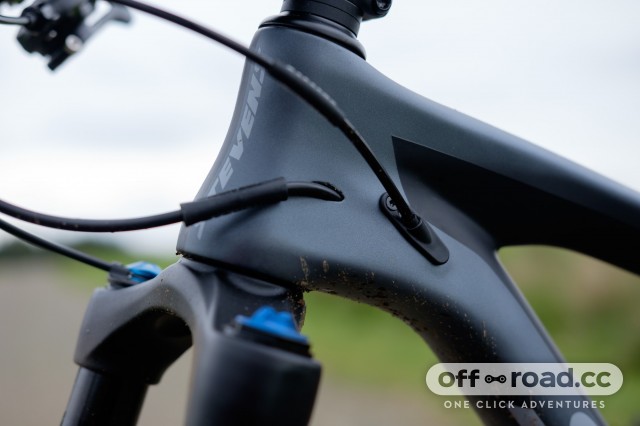 However, the one thing that I would really like to see added to the frameset in some form is a steering limiter to avoid bars, gear or brake levers hitting precious carbon.

That said, all in all this is a high-end frameset that provides an excellent balance between durability, performance and comfort.

The Sonora is decidedly traditional in the geometry department with the steep angles you’d expect of a thoroughbred cross-country racer.

There’s no concessions to the trends of modernity to go longer, lower and slacker — this bike is built to handle quickly and accurately. Whether that’s good or bad depends on where you’re approaching this bike from.

I always intended for this bike to become an extension of a gravel bike, with the ability to cover long distances coupled with even more capability off-road. It does that job admirably. 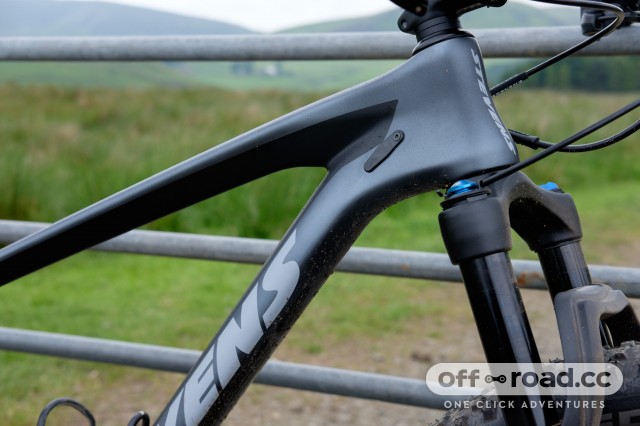 But of course that denies that this is a mountain bike and capable of much more than just gravel tracks. This bike feels right at home out on the trail. There are no surprises with the handling, just a consistent and manageable ride.

Don’t expect a bike with particularly progressive geometry. This isn’t a heavy hitter (not that an cross-country bike should be expected to), but the geometry is quick and agile. That leads to a bike that is playful and a lot of fun to ride, but does require a little bit more attention on more technical sections. 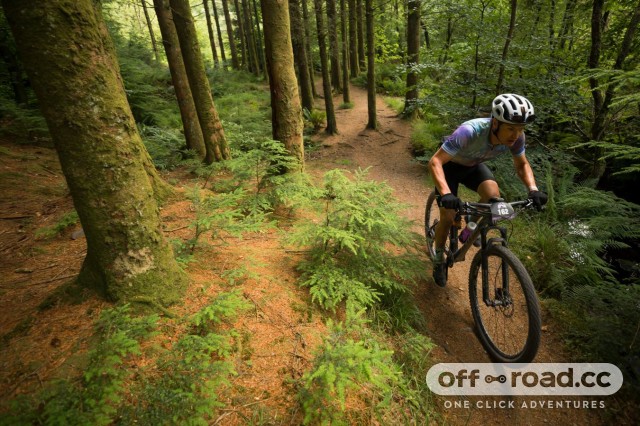 That said, the wheelbase is actually a little longer than similar bikes in this category. This likely adds some extra stability, but moreover contributes to very good climbing manners as well as adding that extra bit of tyre clearance.

I’m actually a fan of longer chainstays, which I feel helps improve weight distribution between front and rear wheels. That plays out here, with a well-balanced ride that is capable in a wide variety of conditions.

Case in point: Grinduro, with a fantastic mix of singletrack, gravel trails and everything in between, which this bike handled with aplomb.

It's nice to see that Steven's has specced a tyre with decent tread (rather than the almost slick tyres that can be found on many an XC bike). The Schwalbe Rocket Rons are an excellent choice providing a great balance between speed and grip. It’s also nice that they are specced in a slightly higher volume 2.25” for a little extra grip and cushioning. 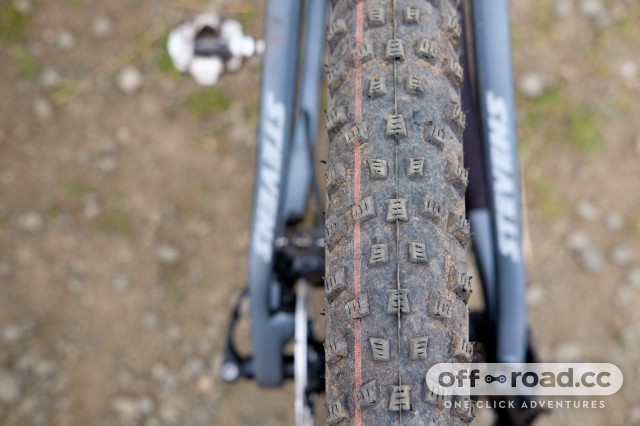 Get the pressure right, and combined with those flexy chainstays you get a very supple and smooth ride.

The tyres roll surprisingly fast on tarmac, (scoring very highly on Bicycle Rolling Resistance) but also offer balanced and predictable handling off road. There may be grippier tyres out there for all-out trail blasting, but as a quick yet capable option this is what I would spec as the do-it-all solution for this kind of bike.

The tyres fitted are the Liteskin casing and I punctured the first time I went out with them (with tubes). Having set them up tubeless there have been absolutely no more issues though, though I’ve definitely had the sealant do its job several times whilst out riding.

One thing that did surprise me is that the DT Swiss wheels didn’t come with tubeless tape installed — something that I had thought came as standard. Other than that the M1900 wheelset is as sturdy and reliable as I’ve come to expect from DT.

It’s not going to set your world on fire in terms of weight but makes a solid, all-round, day in day out training wheelset.

Similarly, the 100 mm travel Fox 32 Rhythm fork is not the lightest out there but can keep up with everything I’ve thrown at it. Fox’s supposedly ‘budget’ option still uses the GRIP damper as found in its Performance line and the Float air spring featured across the Fox range. 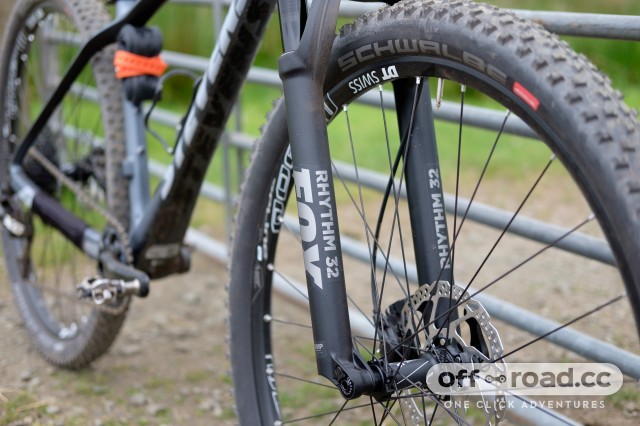 The fork offers adjustable rebound damping, but the compression damping is either open or closed. Having the remote lockout easily accessible on bars is a boon for fast switching on varied terrain.

If there’s one complaint I could level at the fork is it can feel a little spiky/harsh on hard and fast impacts. I imagine this could be due to some fork flex causing a stick-and-slip effect due to the skinny 32mm stanchions bending and binding under high loads. The fork just seems to transmit more force before resuming its usual smooth suspension duties.

That quirk is in contrast to the usual smoothness of the suspension, which tracks the ground admirably and almost always leaves you feeling in control. Obviously, with only 100mm there’s a limited amount of travel to play with, but I feel it's made the most of and adds to a predictable, reliable ride.

Part of the reason we chose this build from the Stevens range was that it was one of the few models fitted with a 1x drivetrain. The continued prevalence of 2x builds is a quirky Euro tendency that we still don’t understand — we are fully converted to the 1x Kool-Aid.

The drivetrain is a mix of SRAM X01 and GX Eagle components, with costs saved on the chain and cassette. That’s not to the detriment of the shifting performance, which has been as reliable as we’ve come to expect.

I did initially have a few issues indexing the derailleur. I wonder whether the tight cable loop coming from the chainstay results in excessive friction in the cable run, with some discrepancies in the shifting as a result.

The crankset is a lower tier item though perfectly serviceable. No doubt a higher end unit could shave some weight, but performance wise I didn’t notice any disadvantages.

However, given the huge range on the Eagle cassette, I would prefer to size the chainring up for those few extra gear inches on fast descents. I actually find it hard to pedal the 50 tooth bailout gear with the 34 tooth chainring — it’s almost too easy to turn and I’d prefer to have a little extra resistance.

That’s an easy enough change to make, and should be simple to do with the direct mount chainrings used on the crankset.

The Shimano Deore brakes are budget stoppers but in our experience have always been reliable performers. Unfortunately, I did experience some overheating issues with these samples. 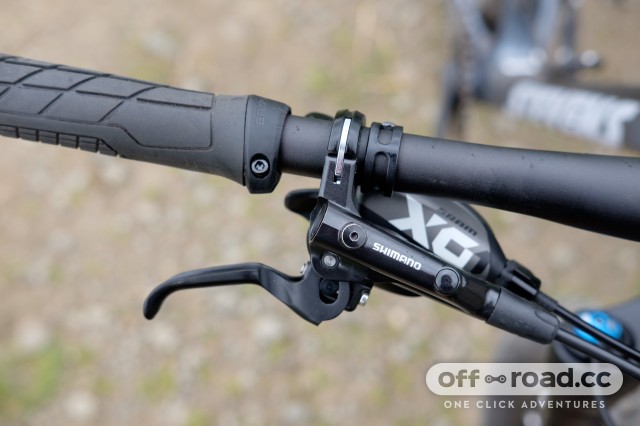 In general use, modulation is good, though my perception is that the brakes can require a slightly more force at the levers than more expensive options. That can lead to tired hands for heavy braking.

More critically, the brakes had a worrying tendency to overheat on sustained descents. I wonder whether this is due to the resin pads not being able to cope with heavy use, but, I ended up with one or two scary moments of fade. It's always possible to fit sintered pads or Shimano's finned IceTech units to help with this.

Whilst it is nice to have a 180mm up front, it almost feels like a token gesture with the braking power of these rotors or pads not quite up to scratch.

I can’t say this amount of pad fade is something I’ve experienced before. I was rather surprised, and whilst it may be an anomaly it is still worth mentioning here.

The one component that impacts handling the most negatively are the narrow bars. Stevens has remained very conservative speccing a width of only 680 mm (the 2019 model comes with slightly wider 700mm bars).

That’s positively miniature by today’s standards, and even your most hardcore XC racer may look at them askance. I would like to see something much wider for the improved control and leverage that it offers. 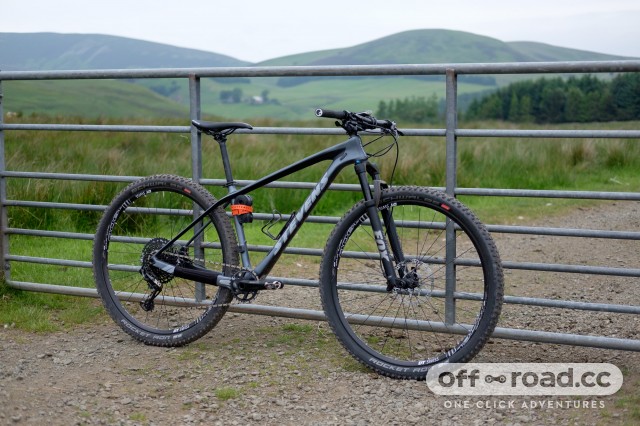 I wasn’t a huge fan of the Ergon grips, but that’s an easy enough change to make.

Apart from that, the finishing kit is decent stuff. The saddle was comfier than expected and the 27.2mm seatpost provides another concession to comfort that is much appreciated.

Sadly that does also mean you’re unlikely to find many dropper posts that fit. I’m a definite advocate for a dropper (shock, horror even on an XC bike) but that’s probably not a huge concern for most of the XC racers out there (yet).

I would like a stem with slightly more drop, but that’s a quirk of my bike fit. Short legs mean I would have liked to be able to get the bars lower relative to my saddle height. 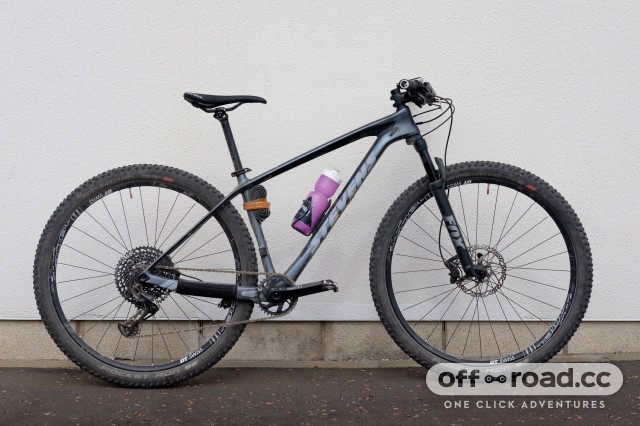 I think this is an excellent option for a cross country ripper.

At that price, you get a decent amount for your money and it competes well with bigger brands out there. Likewise, the 10.7kg weight is competitive at this price resulting in a sprightly and agile bike that leaves you wanting to ride more and more.

I’ve put in some significant mileage aboard this machine and it has provided a rewarding ride every time I’ve gone out on it. Whether it’s a short jaunt or a long expedition you can turn this bike to whatever you want.

It’s that versatility which I find so endearing. This machine could quite happily race its way around cross-country circuits but is equally content traversing a mountain range. It has the limitations inherent to a hardtail bike, but overcomes these with an engaging and thrilling ride that is a constant pleasure.

Stevens bikes are available exclusively in the UK through Hub Velo.

Any comments on drivetrain performance?:

Any comments on controls performance?:

Would have preferred wider bars

Always an engaging ride whether cruising or tackling something more technical