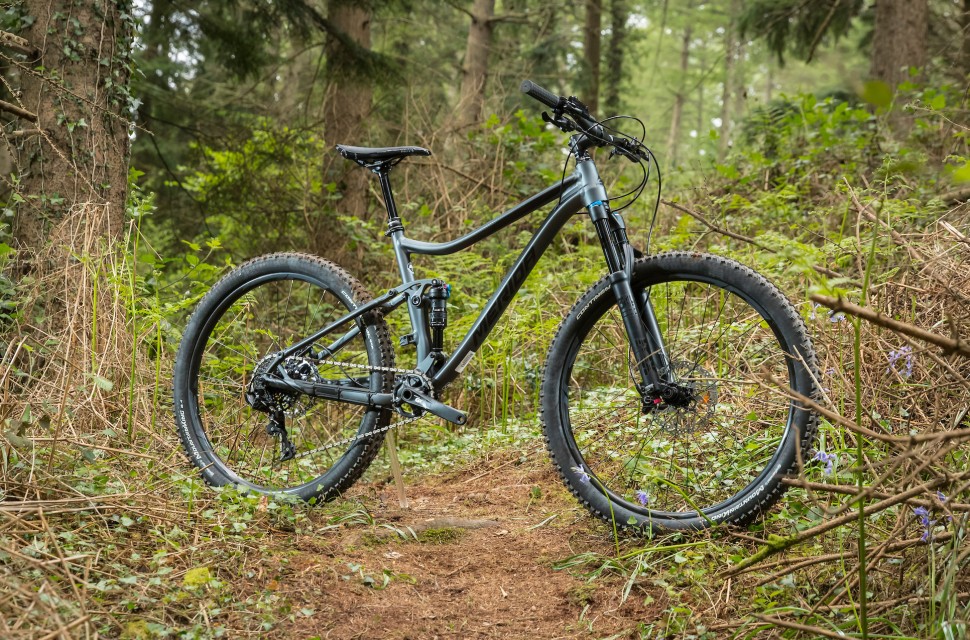 The Merida One-Twenty 7.800 with its 120mm of travel sits nestled between the brand’s XC orientated full suss, the Ninety-Six and the slacker One-Forty trail bike. With the model line up of the One-Twenty split between 27.5” and 29er wheels and some disparity between the geometry and suspension capabilities, the bike is battling with a severe personality complex – efficient XC operator or trail slaying agent?

The One-Twenty is let’s say, unobtrusive to look at, in this guise (the One-Twenty 7.800) the bike offers a stealth black/grey frame and all black components. The number seven in the name denotes the use of 27.5” wheels, whilst bikes higher in the price range than this £2,300 bike get model numbers beginning with ‘9’ and yep, you guessed it; 29er wheels. 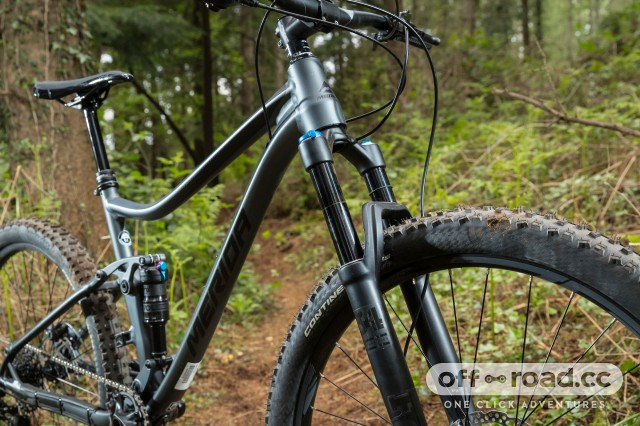 For the price Merida provide a fair spec on the 7.800, you get 130mm Fox 34 Float Performance forks and a Fox Float DPS Performance shock, the performance of which we’ll get to later. To go and stop, you get a 1x11 SRAM GX drivetrain with a 30T chain ring capable of tackling most climbs with aplomb and reliable Shimano M615 brakes which despite sitting at the bottom end of the Shimano range provide predictable control and are fairly powerful too, when coupled with the 180mm rotors 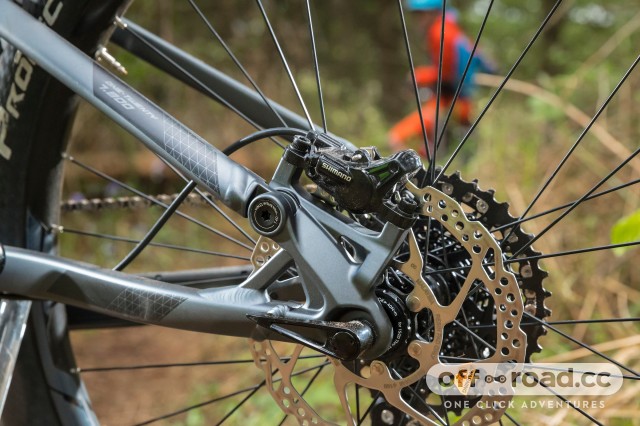 Downsides to the componentry include the use of 2.4” Continental tyres, a tyre with a tread pattern that leaves you wandering between inner and outer knobs when leaning the bike in and grip properties that allow it only to entertain dry or mildly moist conditions. The tyres are matched to fairly wide (29mm internal) Merida rims which provides a better profile to the bulbous tyres than if married to narrower rims. In the 650B guise the bike is aimed at trail riders so comes fitted with Merida’s own 125mm dropper post. The post itself works well but the lever of which fouled on the Shimano brake clamp whichever side it was fitted, preventing it from moving. I eventually settled on fitting it outside the brake clamp (nearer the centre of the bars), not ideal as it had to be fitted quite far inboard and therefore out of thumbs reach. We have seen this shape of lever on a few other ‘in house’ brand droppers and we hope for it to be updated soon! 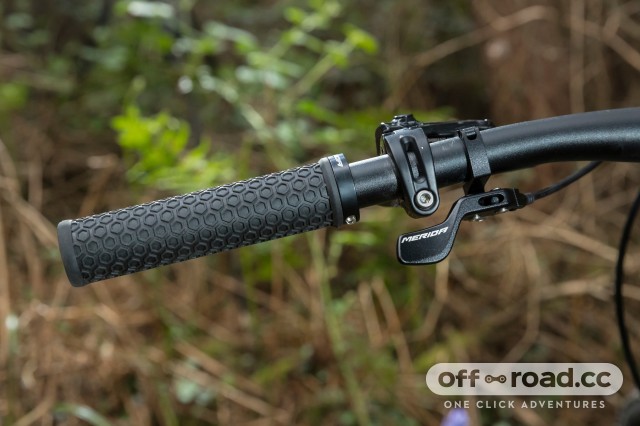 One last point to note, whilst it doesn’t bother me personally, the One-Twenty isn’t boost either so you won’t be getting the supposed benefits of tyre clearance and wheel stiffness, something you do get on competitor 120mm bikes. 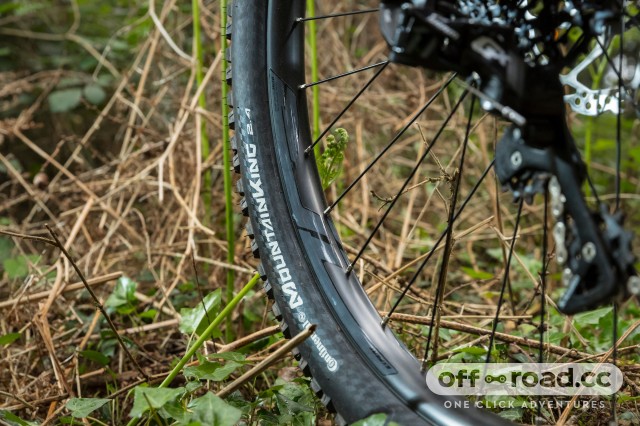 Geometry wise the One-Twenty 7.800 is conservative with a 68 degree head angle, a 430mm reach and a relatively long seat tube of 450mm on our medium sized test bike. The short reach and long seat tube coupled with a tall head tube for a medium bike (110mm) mean that you really feel like you are riding on top of this bike, rather than ‘in’ it. The short reach of the bike is supplemented by a 55mm stem and 760mm wide bars meaning the cockpit didn’t feel overly cramped but I am only 5’4”, taller riders might feel differently. 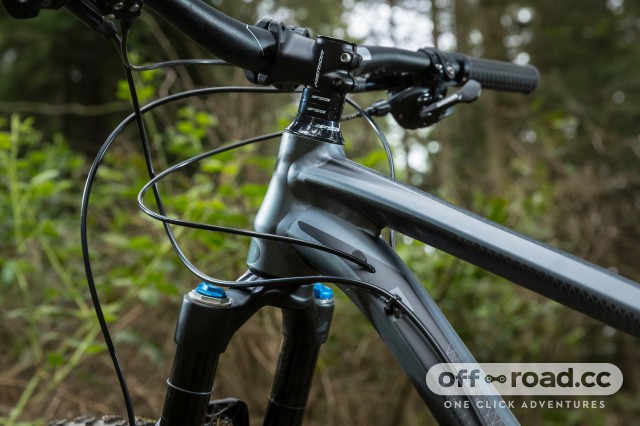 Sit astride the One-Twenty 7.800 at the base of a steep hill and climbing up it won’t feel like an insurmountable task. A 74.5 degree seat angle means the rider's weight is placed further over the bottom bracket, the steeper this angle is the better we think (to a point), 73 degrees was the old average so Merida is moving in the right direction. This little bike takes its effective seat tube angle and the (good for climbing) 440mm chain stays and uses them to crack on as every good workhorse should.

Setting off up the climb proper and the suspension platform begins to shine. The super supple ‘Float Link’ connects the shock to the upper linkage and onto an extended chain stay meaning that the lower shock mount moves too which in feel relates to a ‘bottomless’ feel. The sensitive nature of the suspension means that the bike does not ‘hang up’ over lumps and bumps, smoothing out the trail and allowing the rider to keep placing the power down evenly and consistently. The blight to this pony’s copy book in the climbing department is its tall front end and short wheelbase (1142mm). The former prevents the rider from weighting the front end adequately on technical steep climbs, whilst the latter causes the bike to want to pivot around the tight centre point, meaning the front wheel tends to lift on steep climbs. 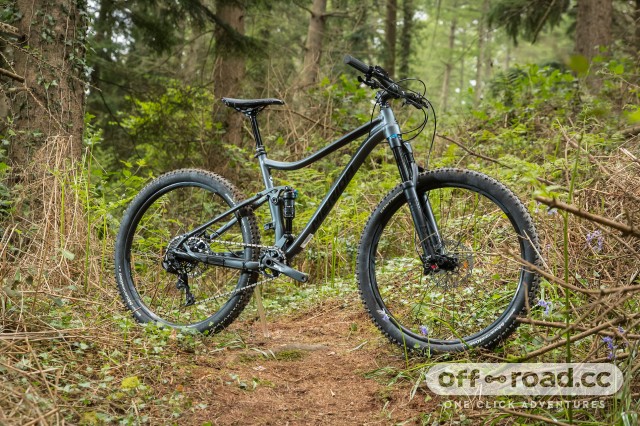 Taking the Merida One-Twenty 7.800 down hill, I became distinctly aware of its personality disorder. The bike is specced with parts and has the suspension platform that well out-plays its geometry. There’s a trail slaying machine wanting to break free, imprisoned by out of date and conservative geometry. The ‘Float Link’ and Fox Float DPS Performance shock provide a reactive and progressive platform absorbing small bumps and big hits with equal ease, the feel belying the amount of travel on offer. 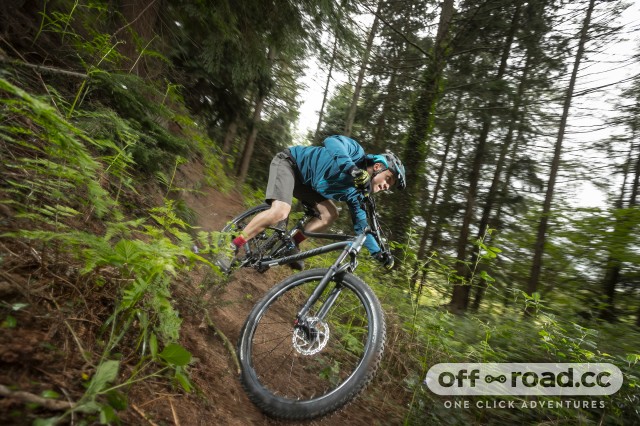 Up at the front the Fox 34’s work hard to instil the same confidence as the rear end. That’s no detriment to the forks which are adequately stiff in this 130mm form and work superbly well to smooth out trail chatter. The steep head angle prevents the bike from ploughing into terrain that the rear end is capable of chewing up and spitting out, the short reach and short wheel base creates the effect of leaving you feeling pitched over the front on steeper sections at even the most undemanding of trail centres, whilst the high front end and long seat tube leave you hovering above the saddle like someone wavering on the peripheries of their significant others work’s do. A wheel base of this length isn’t uncommon in the 120mm trail bike market but other similar bikes are going longer and slacker, giving a more stable and confident ride something we’d be keen to see on bikes across the board. This One-Twenty is a bike that doesn’t want to charge and when the speed gets up or the going gets steeper, it backs away from the challenge and you’ll find yourself pulling on the brakes and taking things at a more leisurely pace.

Pointing the Merida towards terrain with less gradient and where smooth corners and loamy ruts are the name of the game and you’ll see the fun factor return. Dial the shock rebound damping off a click and the short nature of the bike (despite its long chain stays) makes it a poppy and active affair, it’s a hoot slapping between berms and hopping over doubles with minimum effort. 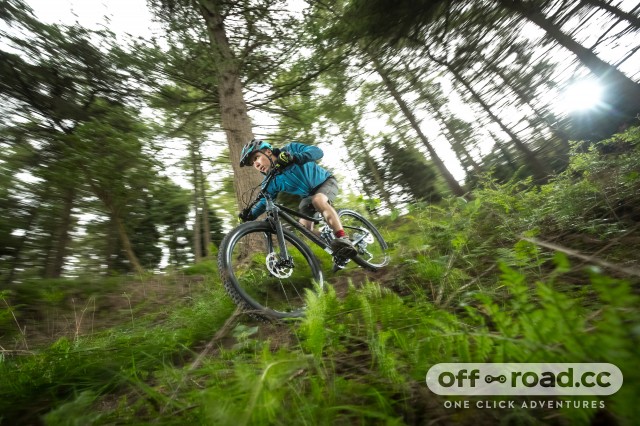 A bike of two halves, I can see the potential of the Merida One-Twenty. The suspension is sublime and more than ready for the aggressive geometry that 120mm trail bikes are sporting nowadays. With the new One-Sixty (Merida’s 160mm enduro bike) sporting the same ‘Float Link’ and progressive geometry more applicable for today’s longer and lower bikes I hope it won’t be long before the One-Twenty gets the same treatment. In that future form, I’ll expect its demeanour will be quite different!