Skip to main content
Log In Register
Genesis Datum 10 £1,899.00
A very comfortable, forgiving, yet engaging bike for adventures on and off the road, with a great value spec 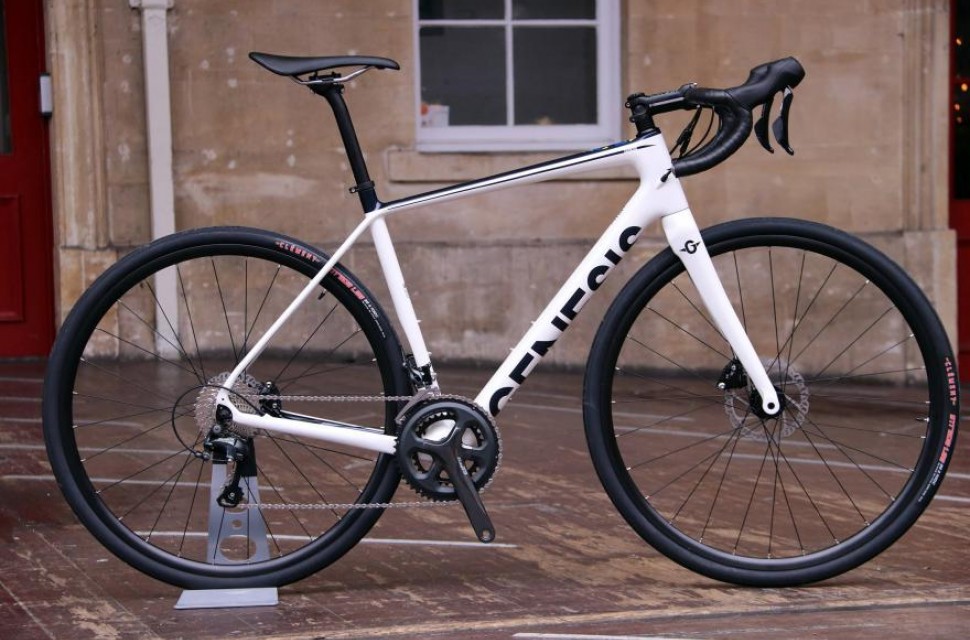 Rachael Wight
|
Aug 7 2017
|
Overall
Quality
Performance
Value
What's good?
What's not?
Buy if...
You are looking for excellent value and the ability to jump between town and country use

The Genesis Datum 10 will take pretty much whatever you can throw at it, on or off-road. The spec represents excellent value and the ability to jump between town and country use positions it as a sound contender for an 'only bike' that you won't be sheepish about getting muddy on, while being worthy of a shine-up for the Sunday morning group ride.

On test I have the base £1,899 10-speed Tiagra model, for this spec it's not a class-leadingly cheap bike, but the overall package is worthy of inclusion on anyone's to-be-considered list. You get loads of clearance, both frame and fork taking 36mm gravel-orientated tyres with no problems. The mudguard mounts are the same, and there are still the three sets of bottle cage mounts for those considering a bit of bike packing or ultra-long-distance riding.The paint job is simply stunning – a metallic pearl finish, with acceptable amounts of branding. I did manage to get a hefty chip near the small chainring, but given what I put it through (see later) that's entirely forgivable. Owners might consider a few well-placed areas of helicopter tape to keep things looking tip-top. 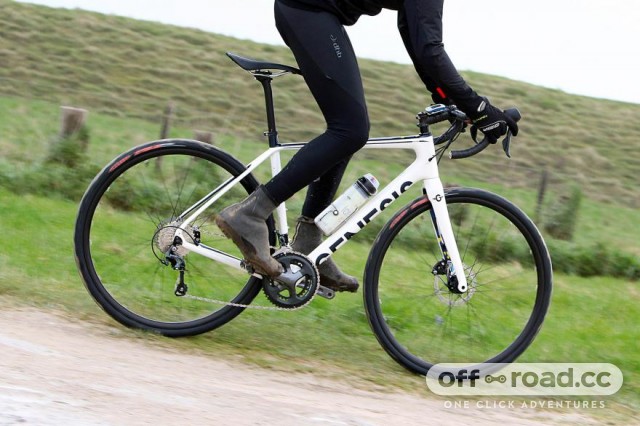 For 2017 there’s a change of spec, with notable improvements on the 2015 base model being the addition of Shimano's BR-405 hydraulic callipers and levers over the cable-operated TRP HyRd. Stopping power is enhanced by the use of a 160mm rotor up front, meaning there's never any need for more than two fingers on the levers, even with hands on the hoods let alone in the drops. 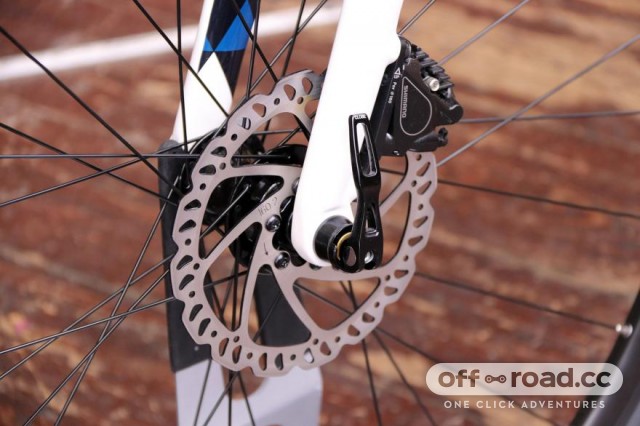 The included 32mm Clement Strada tyres aren't tubeless-ready, nor are the 19mm internal-width rims. They're perfectly fast enough on the road, and 32mm allows for decently-low and comfortable pressures, but the risk of flats is still there. This would be my only grumble about the Datum 10 spec – I'd say any bike benefits from a tubeless tyre setup, and if you are specifically pointing it at bridleways and gravel roads, tubeless-ready is a must-have that rates alongside water, shelter and WiFi as a basic human right. 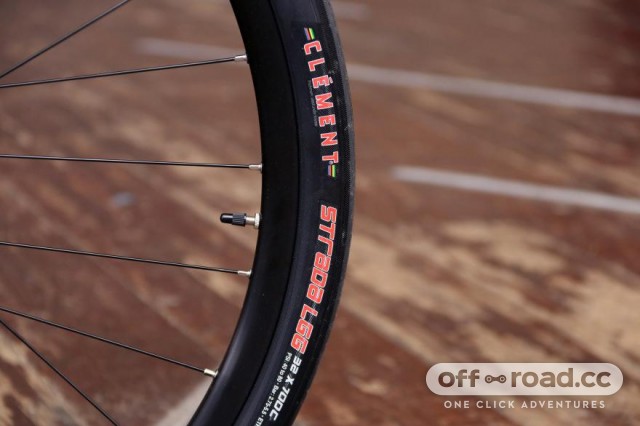 The Strada is a perfectly capable tyre for general riding purposes, but 32mm is a bit on the slim side for decent off-tarmac forays where you benefit from dropping the pressure to enhance grip and comfort. On the first outing I took on the Team Dirty Reiver for a 60km bash along Wiltshire's finest gravel roads, I suffered no fewer than three punctures. Mankind has evolved beyond inner tubes, and I couldn't get the bike set up tubeless fast enough. This was easily done with a few layers of tubeless rim tape and a swap to the excellent 36mm Clement X'Plor MSO gravel tyre. 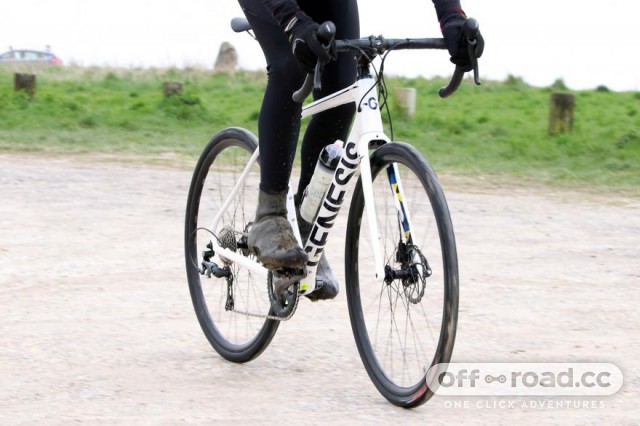 Speaking of grip and comfort, the handlebar is a tad on the skinny side, diameter-wise. Adding an extra layer of bar tape improves things dramatically, a £5 fix that I'm surprised isn't employed more often by brands to improve comfort. 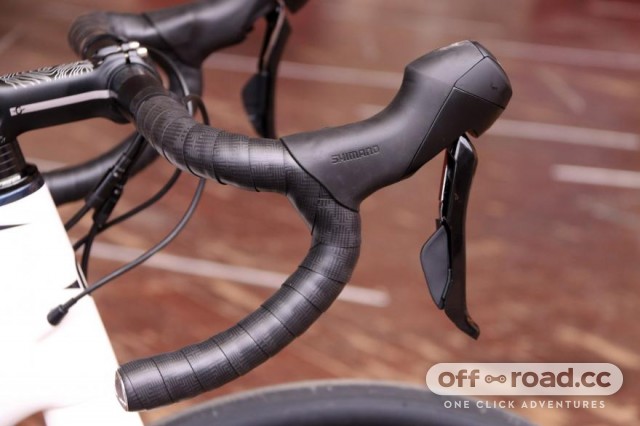 A clear nod to the UK's weather is in the form of the nicely-done mudguard mounts, hidden from view for summer builds. You don't get rack mounts, but this isn't the bike for multi-day adventures requiring panniers – handlebar and frame/saddlebags, sure. Further adding to the clean lines are the cable ports around the hefty head tube, although as-built there's no front mech adjustment so you might want to add an inline barrel adjuster at the first gear cable service. 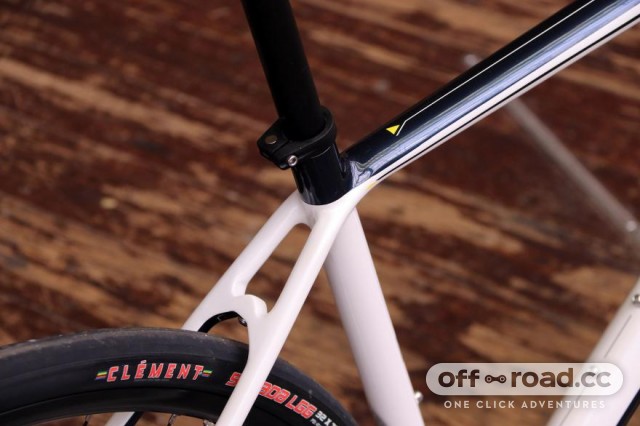 With a 9.6kg build weight (without pedals), the Datum 10 isn't going to win any hill climbing shootouts, but this bike isn't about being first to the top – rather, making the trip down on rough surfaces one that's enjoyable, not lethal. The 1,020mm wheelbase (as measured) makes the Datum 10 a very forgiving on and off-road sled – there are no surprises lurking when you've piled on the miles and aren't paying close attention to steering input.

On tarmac, smooth or rough, the Datum 10 was a very enjoyable ride. The frame and fork combine to offer an engaging ride at any speed, the wide tyres and hydraulic brakes giving you the confidence to bomb rough-tarmac descents without fear. On a 100km outing around the South Downs Way and associated to/from tarmac stretches, the Datum 10 was both fast and comfortable – with five Strava top 10s and a KOM in the one ride, this is clearly a bike that doesn't hold you back. 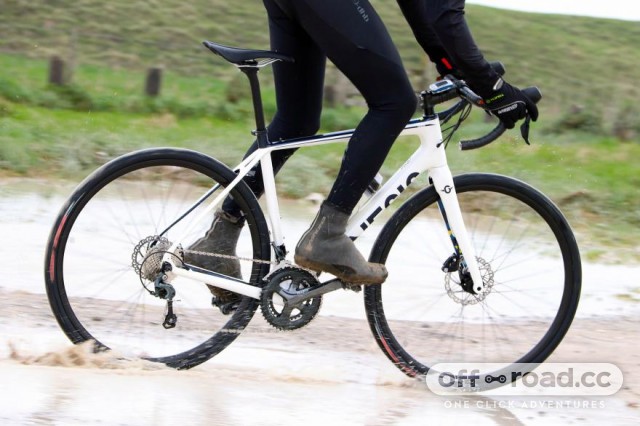 It's off-road, long-distance where the Datum 10 reveals its hidden side – one that, like 95% of urban 4x4s staying clean and dry, may never see the light for many riders. But if you want to, it's comforting to know that the capability is there. In this case, the test was arguably the UK's toughest one-day cycling challenge: the Dirty Reiver. The Dirty Reiver is a 200km, almost entirely off-road ride in Northumbria's Kielder Forest, taking in every possible combination of gravel, rock, moss and grass. It was the hardest day out on a bike I think I've ever had. The Datum 10 performed flawlessly – the long wheelbase and handling meaning that going up or down, fast or slow, on hard-pack or deep gravel, there were no nasty surprises.

On the few occasions that user-induced numptyness had me heading off-line for a bank or ditch, a quick tap on the brakes and swerve got things back on track. I'd made a schoolboy error in my rear tyre tubeless setup (the pump head came apart when checking the pressure and I couldn't reseat the tyre), meaning on the day I ran pressure twice as hard as planned, with an inner tube in the rear. I suffered no flats as a result, and the 36mm tyre width combined with the rest of the Datum 10 package to leave me feeling much better than I expected to. Had I run the tyre pressure as planned I'm certain the ride would have been much more enjoyable and inevitably faster because of improved confidence in the corners and over rough surfaces. 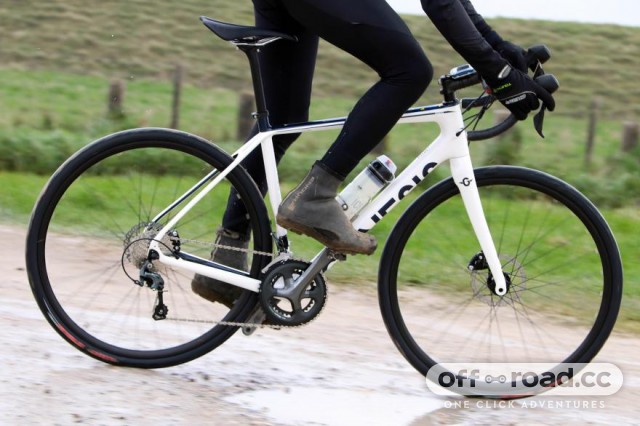 The Tiagra groupset never missed a beat – even when left in small-small hammering over Belgian pavé-esque surfaces. The Tiagra-shaped hoods might not be everyone's cup of tea, but they did the job and I suffered no issues with hands or arms. The 420mm bar was just right – I usually run 400 and the extra width was appreciated for stability and leverage when needed.

It's difficult to imagine a tougher test for a do-it-all bike than the Dirty Reiver – and it passed with flying colours. Of course, you don't have to go to that extreme. Pre-Dirty Reiver I rode the 40km immaculately gravelled loop of Kielder Water itself, at an average of 25km/h with a 3rd overall on the final 9km leg back to the holiday house. This trail comprises almost constant twists and turns, with frequent pitches of 5-10% as it rolls around the stunning lakeshore. The Datum 10 was an absolute hoot to ride here, early morning meaning no other trail users to worry about. While 'snappy acceleration' isn't a term oft-used alongside 'gravel', the overall experience was grin-inducing and well worthy of a repeat.

The Genesis Datum 10 is clearly far more capable than most riders will ever need, it's light-ish, fast and fun on the road and confidence-inspiring off. The minor omissions in spec can be improved at minimal cost, and the base package of frame, fork and hydraulic groupset are absolutely sound. A very comfortable, forgiving, yet engaging bike for adventures on and off the road, with a great value spec.

A very comfortable, forgiving, yet engaging bike for adventures on and off the road, with a great value spec