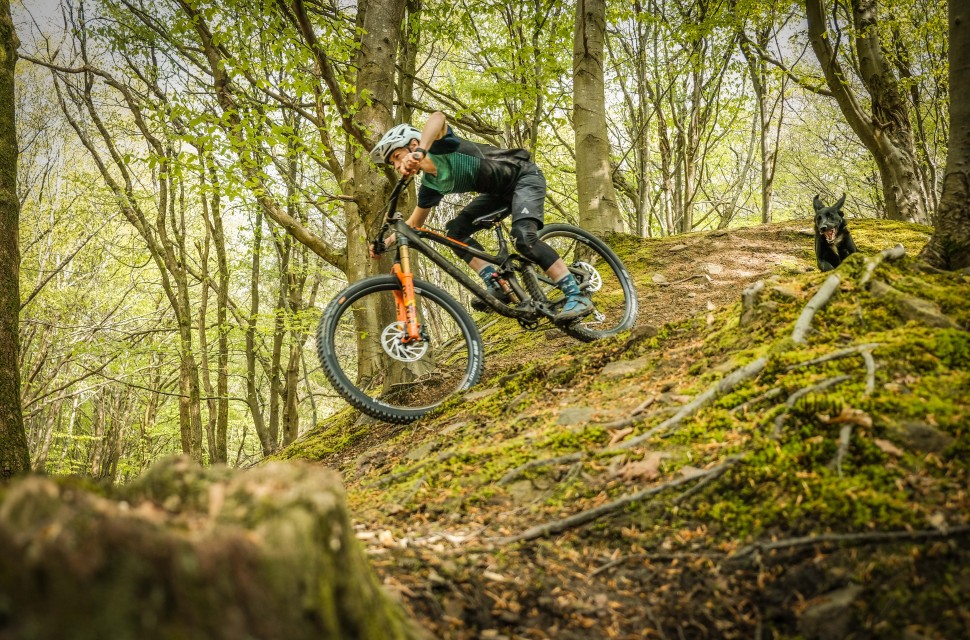 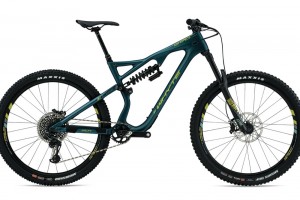 The NS Bikes Define 150 1 is a big wheeled beast that is big on travel and looks too. The 29er enduro bike has relatively progressive geometry, a big spec list and suspension that will eat up most things in its path. If you like your bikes long in travel and big on performance then you and the Define 150 will get on well.

We don’t think NS Bikes will mind us saying this is basically a 29er Snabb, the say the ‘borrowed’ a few things from the 160mm 27.5” bike such as the 4-bar suspension kinematics and some of the geometry. This bike, however, gets 29er wheels and 155mm travel, paired with a 160mm fork. It’s slacker than the smaller wheeled bike, it has a longer reach by 5mm, longer chainstays and consequently a longer wheelbase. The 29er Define also gets adjustable geometry but we’ll get to that in a minute. 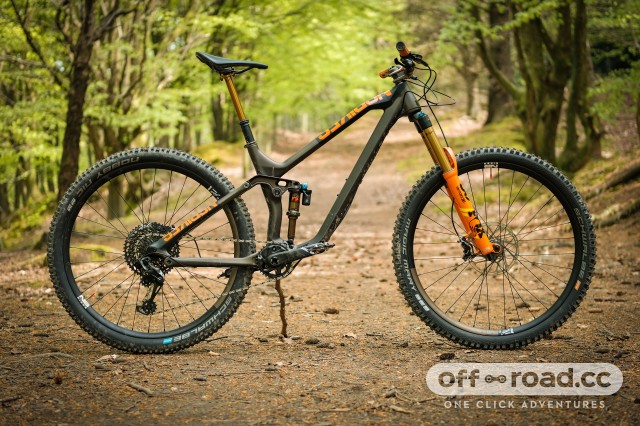 The Define 150 1 is the top spec bike in a two bike range, coming in at £5,500 it’s not cheap by any means but the kit on this bike is unlikely to disappoint. Distributed by Hotlines the Define 150 is carbon only, whether you go for a Define 1 or the cheaper Define 2 (£3,995). That carbon frame gets adjustable offset cups (+/- 10mm), a press fit bottom bracket and neat cable routing which sees all the cables houses in an uncovered recess under the downtube. This frame comes with a trunnion mounted Fox Factory Float DPX2 with the three position compression adjustment lever. 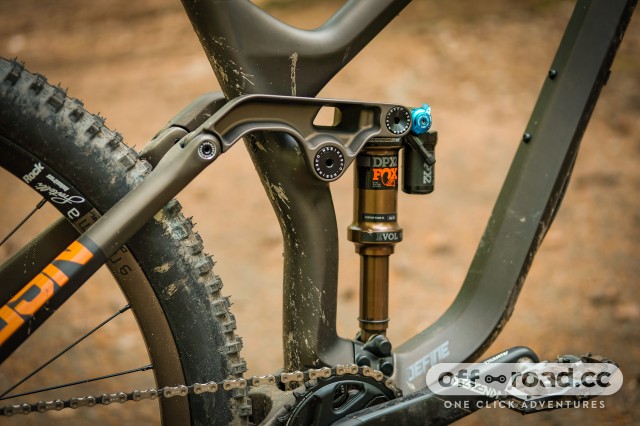 You can buy the NS Define as 155mm bike as you see here and also a 130mm bike, cleverly the designers have managed to use the same front and rear triangle for both bikes with only the lower shock mount differing, meaning if you wanted a 130mm 29er and had a shock fork to match, it'd be an easy swap to make. The lower shock mount can also be flipped to lower the bottom bracket on both Define 150 and 130 bikes. 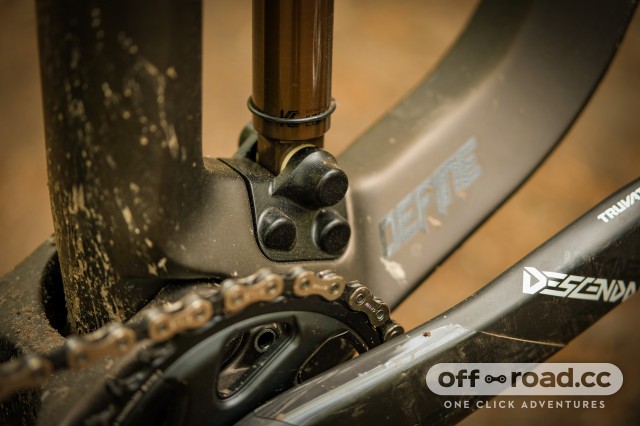 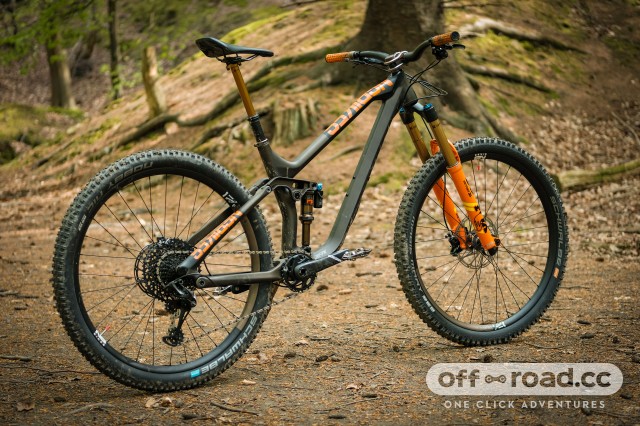 The 160mm fork is a Fox Factory 36 Float FIT4 with a shorter 44mm offset but it’s not got the new GRIP 2 damper, if you want to upgrade it’ll cost you about £434 with Silverfish (price includes a service so we hear). Elsewhere there is a SRAM GX Eagle drivetrain with Truvative Descendant Carbon cranks (170mm) and SRAM Guide RS brakes to do the stopping, there’s a 200mm rotor up front and a 180mm at the rear. 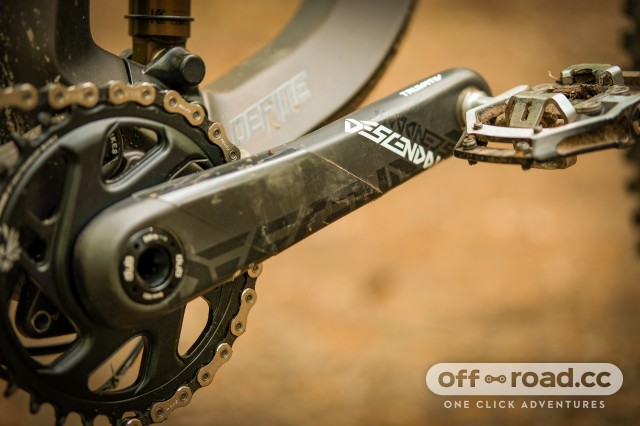 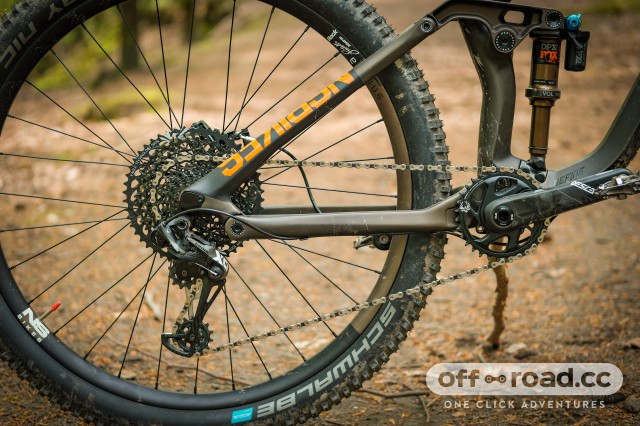 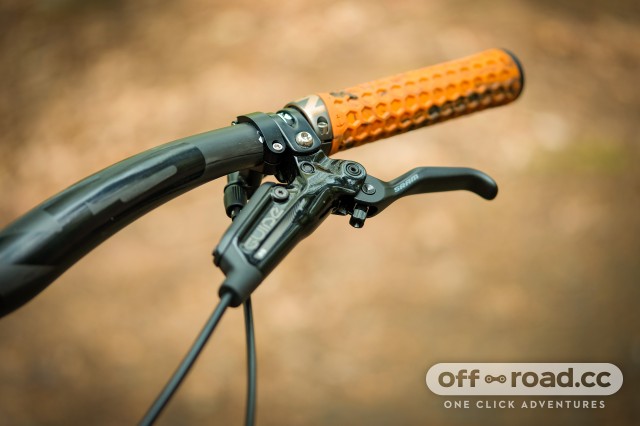 NS have specced their own alloy NS Enigma Roll 29 rims and NS Rotary hubs. The rims are a suitably wide 30mm internal width but it is a tad disappointing to see an own brand, circa £300 wheelset on such an expensive bike. This 29er wheelset weighs a claimed 1,955g so they are a little hefty but seeing as I like the ride of alloy wheels on a carbon frame I won’t complain too much. I also haven’t had the chance to put these through a long term test though so I can’t comment on their longevity. 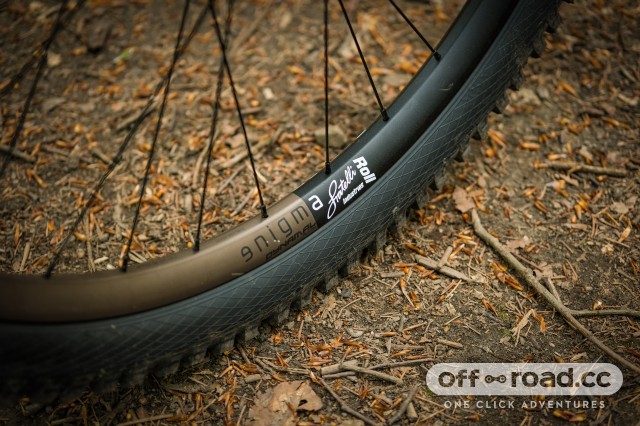 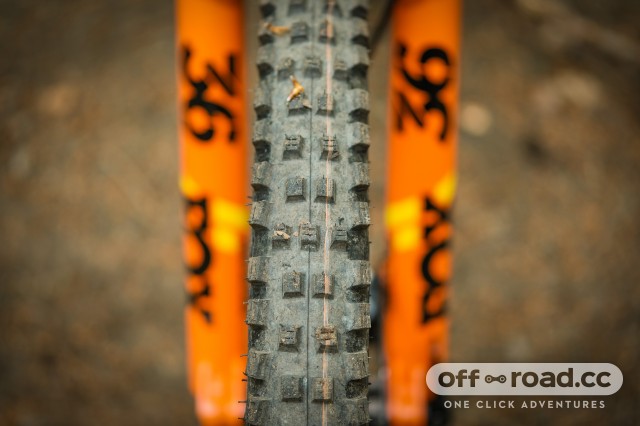 The rims, although are 30mm wide are only shod with a 2.35” Magic Mary and a Nobby Nic which look rather narrow after riding a plethora of endure bikes sporting 2.6” tyres. I like the increased grip that the wider rubber gives and with a wide choice of carcasses available, I can’t see a reason not to run them, it’d be a quick upgrade for this bike too. That said, its personal preference and the grippy orange Addix compound Magic Mary up front will suit a most riders, the EVO (Snakeskin) Nobby Nic on the back might not be the most reliable though, especially if you ride particularly hard! 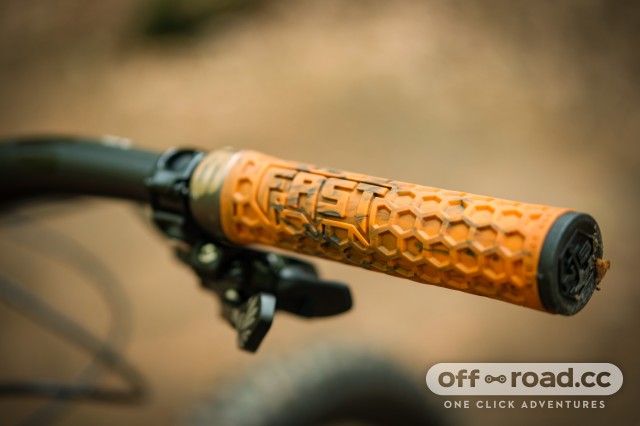 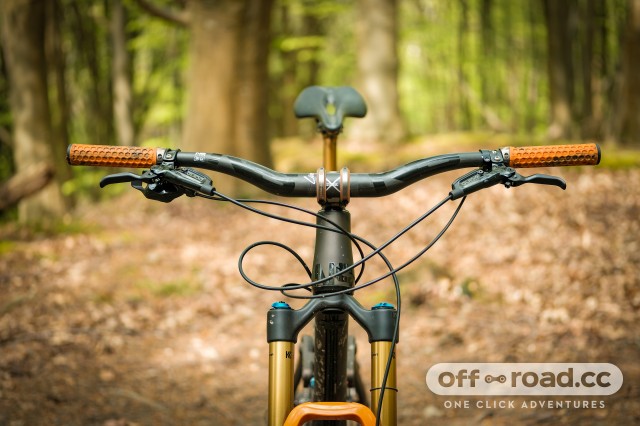 To finish the build there is more NS kit, a carbon 800mm wide, 35mm diameter bar, a 45mm stem and NS Hold Fast grips. Lastly, there is a Fox Transfer dropper post with 150mm of drop. The dropper post was a bone of contention for me, the post measures 485mm from top to bottom, but owing to the rocker link pivot on the seat tube I was unable to insert the post very far into the seat tube, leaving a 60mm sticking out of the top, too high for my liking. This is particularly frustrating as a rider who likes to size up on bikes and one where the 430mm seat tube ad 450mm reach on a medium bike is pretty much perfect for me. To add insult to injury the Define 2 is sold with a X-Fusion Manic post which measures 437mm top to bottom, essentially solving my problems. 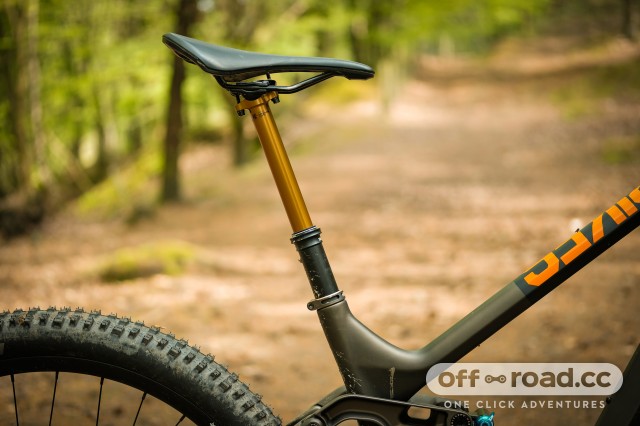 Seat post issues aside the NS Define is a weapon on the trails, the suspension is supple and supportive and although I didn't get a chance to really press the bike on rough tracks I can't see that it will be much cause much concern at all, the fork and shock are both high end products and provide a lot of adjustability. I'm about to hand the bike over to off-road.cc editor Jon for a full review so it will be interesting to see how he gets on down some south Wales steeps.

With a 64.5 degree headangle, the bike is slack enough to tackle anything you'd want to throw it down, it's a super capable bike with aggressive geometry, a roomy reach and a long wheelbase (1225mm) which all aids stability when the going gets rough. The amount of travel on offer and the geometry make this bike a downhill pinner, it suits fast rough going, if you wanted to race it'd likely be a good partner. 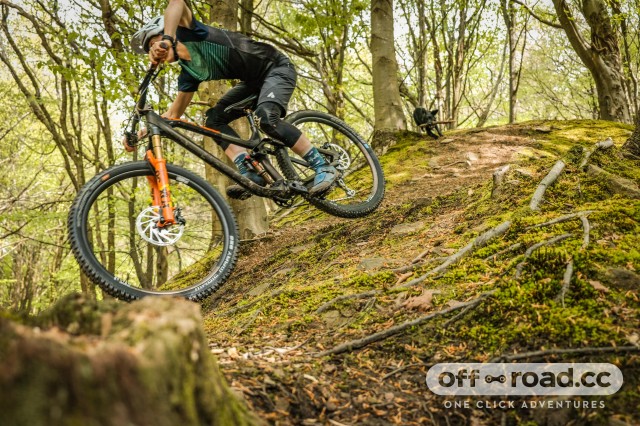 The Define is pretty light, which along with its 75.5 degree seat angle makes climbing pretty easy, I did find the front end a little high when seated but it wasn't something that bothered me when descending. The stack on the medium bike is 639mm which is high even for 29er standards (a Spesh Enduro 29 is 606mm), this coupled with a high rise bar (35mm) felt super tall. Swapping the bar out would help, but it's still high for a medium bike and made it hard to manoeuvre over the front end on techy climbs. 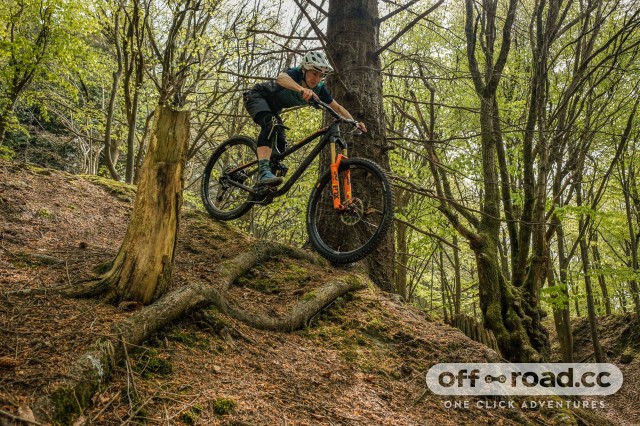 The NS Define is an exciting bike, albeit a pricey one. If a carbon 29er with frame geometry adjustability is high on your wish list then this bike is definitely worth a look. It looks like a bike that will prove fast on race stages and also be a load of fun round your local trails, if they are steep and you like going fast!

Hotlines will be bringing both the Define 150 in both the ‘1’ and ‘2’ spec options as well as frame only.