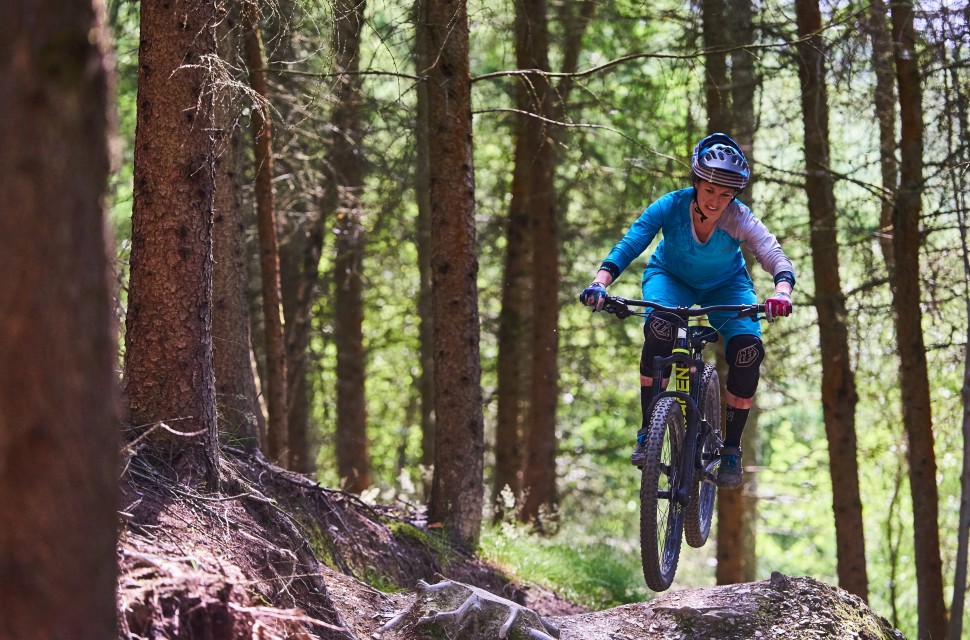 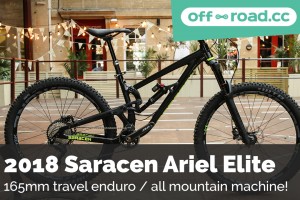 Back in July we checked out Saracen's new range of bikes to include a brand new Ariel and updates to the Kili Flyer trail bike and Myst DH rig. We took a very enjoyable ride on the new Alloy Ariel, it had to be prised from our Staff Writer's hands against feeble mumblings of "just one more run...."

When a brand chooses a remote Welsh bike park for the launch of new bikes you start to get a feeling of the character of the new bike, how they want it to be portrayed and the kind of riding this machine wants to be immersed in. Arriving at Revolution Bike Park for a first look at the new Saracen Ariel, we only had to take one look at the bike to be sure of its intentions. Hanging in the bike stand was a row of dominant and burly looking frames, adorned with suspension and componentry rife for slaying down a serious hillside or two (or many)! 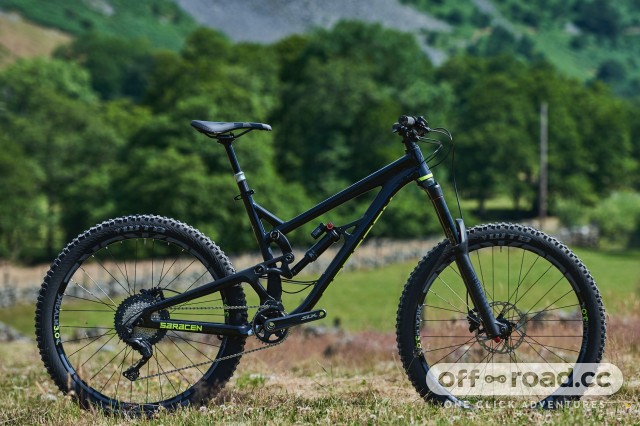 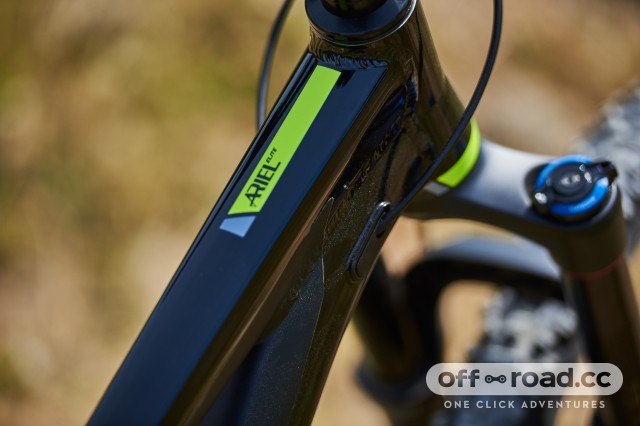 The Ariel is Saracen’s offering to the ever popular ‘enduro’ bike category, one that has been on the market in various incarnations for a few years now. In recent times, this bike although relatively progressive in geometry terms was sadly known for its inherently wobbly rear end, due to the use of bushes in the linkage. 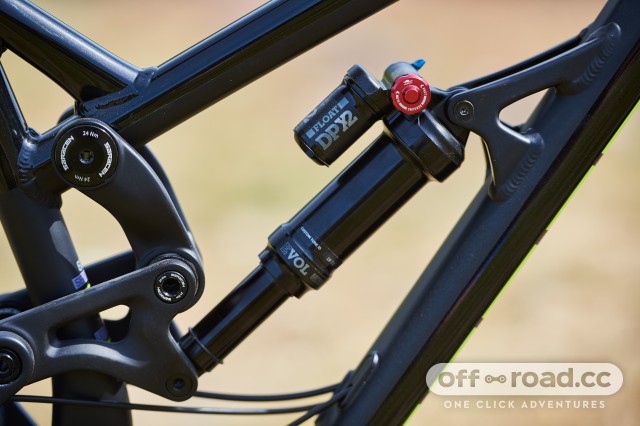 I got a chance to look at both the carbon and the aluminium version of the 165mm travel Ariel, the carbon edition (£5,000) is kitted out with 170mm Fox 36 forks, a Fox DHX shock, a Shimano XT groupset, Enve bars, DT Swiss M1900 Spline 30mm external rims, Maxxis Minion tyres and Saracen’s own 150mm dropper post. The alternative and cheaper version (£3,300) of the Ariel has an aluminium front and and a carbon rear triangle. It gets 170mm Rockshox Yari’s, a Fox DPX 2 shock, a 1x drivetrain comprising of Shimano XT mech and SLX 11-46T cassette, Shimano Deore M6000 brakes, Kore Realm 3.0 rims (30mm external width), WTB Vigilante tyres and again, Saracen’s 150mm cable actuated dropper post. 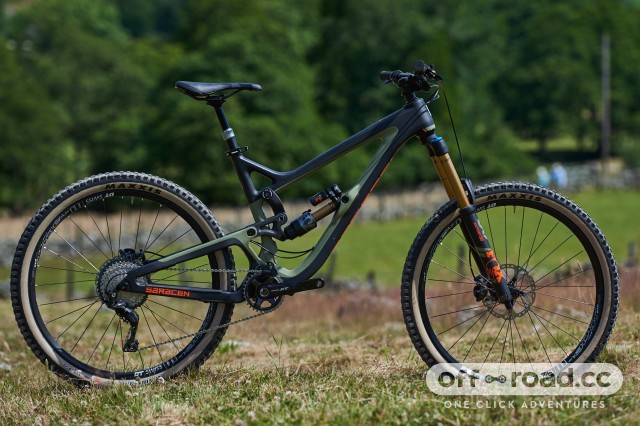 For 2017 Saracen have overhauled the suspension platform upping the travel to 165mm and used a linkage driven single pivot with the design based on their downhill bike, the Myst. It’s a tried and tested design, used extensively by the race team last year and one that, with its large pivots and chunky linkage looks good to stand the test of time and is designed to be stiffer and more durable. The other corners of the Ariel feature a boost set up, internal cable routing and a threaded BB. 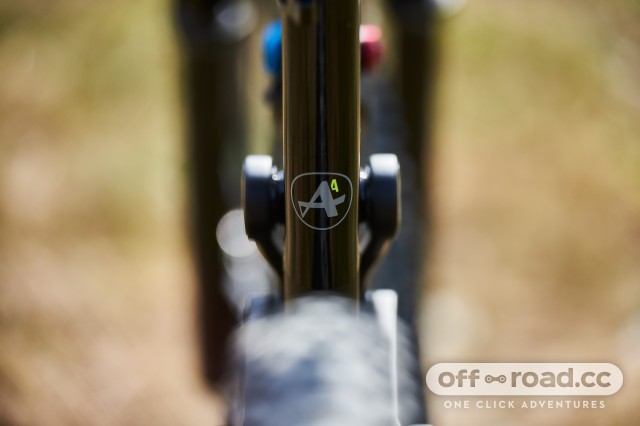 Geometry wise Saracen has slackened the Ariel’s head angle by a degree to 65 degrees, the reach on the medium stays the same at 440mm (medium sized bike) and the seat tube is a pleasingly short 400mm. The seat angle also stays the same at a, could be steeper, 74 degrees. Chainstays have grown by 5mm to 435mm and the wheelbase comes in at 1198mm, on the lengthy side compared to its peers.  The carbon version of the bike uses a reach adjustable headset meaning you can adjust the reach by -5, 0 or +5mm, a nice addition but unfortunately not available on the alloy version of the bike. 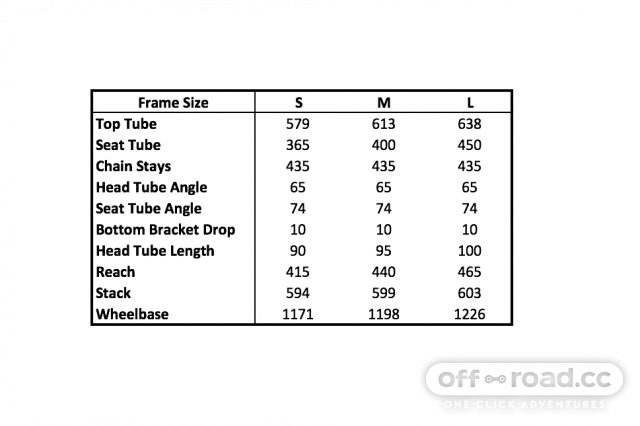 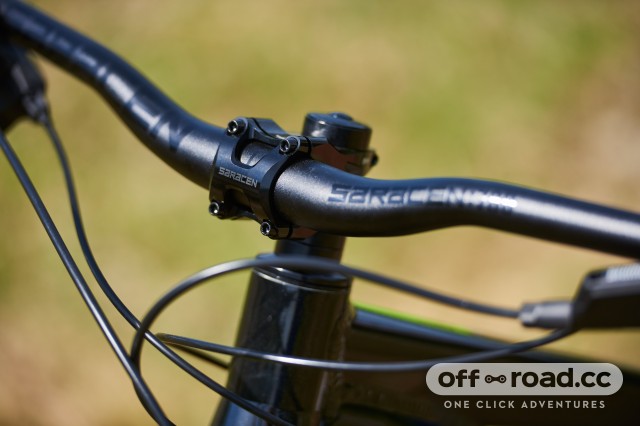 A whole day of uplifts was on offer with Saracen at Revolution Bike Park for testing and I chose to spend most of the day on the Ariel Elite rather than its carbon brother, identical in geometry, I wanted to see how the lower specced bike performed. 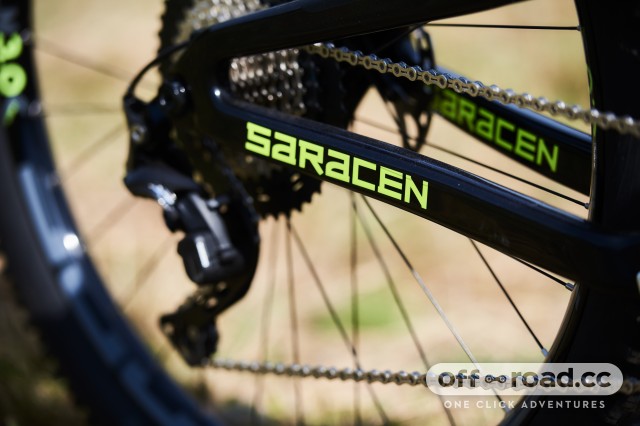 Charging off the start line at the top of the uplift I took a few runs to give the brand new bike a shakedown, bed brakes in and get suspension settings dialled in. Once sorted I hit the same trail repeatedly, the best way to get a feel for a bike in a short time. The head angle of 65 degrees was plenty slack enough for the trail I threw at it, although I’m firmly in the camp that slacker is usually better.  Three years ago when this bike was in the making at Saracen HQ, 65 degrees was more than likely deemed aggressive. Now though this number is average and even expected on an enduro bike, the industry seems to have hit a brick wall where mainstream bikes are scared of creeping into the lower 60’s where this figure is concerned. Nasty rumours that bikes that are too slack don’t climb are rife, it does take a different riding style to ride a longer slacker bike but if you are hitting the trails this bike is made for then you’re probably more than capable of making the adaption. 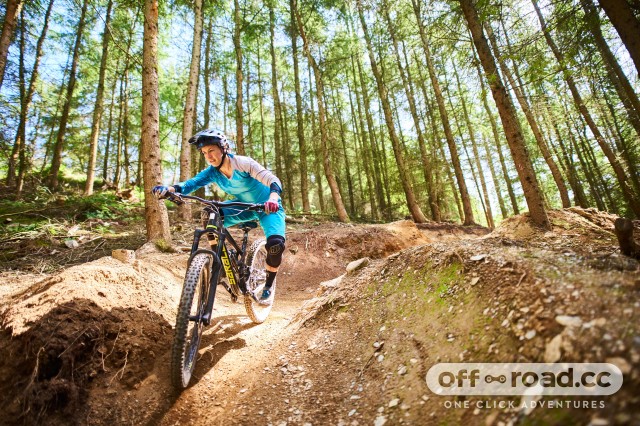 Trails at Revo Bike Park are rough and the owners make no bones about that – they’re meant to be that way! The Ariel ate up all the small bump chunder with ease, the rear tyre sticking to the ground well, there’s buckets of traction both under braking and in corners, it’s a bike that encourages you to charge in, full speed ahead and deal with the consequences later should you find them, which given the capabilities of this bike we think will be few and far between. The lengthy wheelbase keeps the bike planted and stable in a straight line too, it’s a heap of fun to feel the bike ploughing down the fall line, the suspension soaking up the undulations in the trail. The length of the bike doesn’t mean the Ariel foregoes cornering ability either, as we said earlier, adapting to this length and weighting the front of the bike means turns are dispatched with the finesse of much shorter ‘poppier’ bikes. 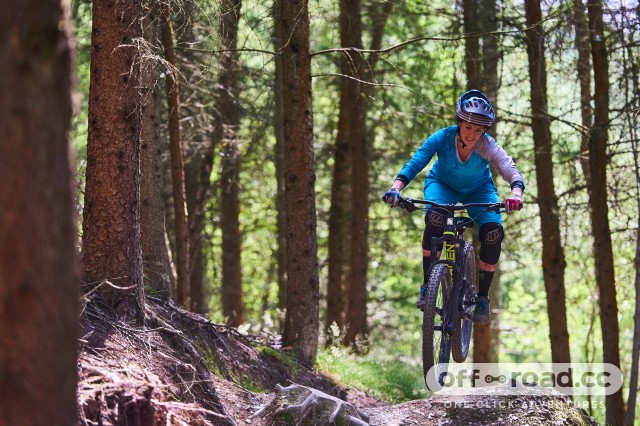 The Yari forks specified on the aluminium version of the Ariel were something of a disappointment out of the box. Due to how hard this bike is willing to push, you'll likely want a couple of volume reducer tokens installed from the get go. The supple rear end highlighted the pitfalls of the Yari immediately, needing more air than I'd usually run, to achieve the same level of support. One or two tokens would almost certainly rectify this, despite the Yari's more basic damping internals. 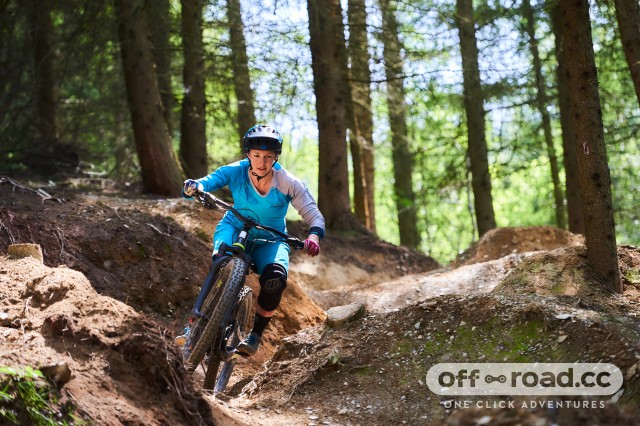 We have to fess up here and tell you we didn’t ride the Ariel up any hills, our day on this bike was fully uplift assisted, so we can’t tell you anything at all about its climbing ability. Maybe we should have ridden up the hill once but who does that when there’s an uplift on offer?! We really need to spend more time on the bike to get better acquainted with the rest of the specification and how this kit performs in a muddier, less downhill orientated situation. 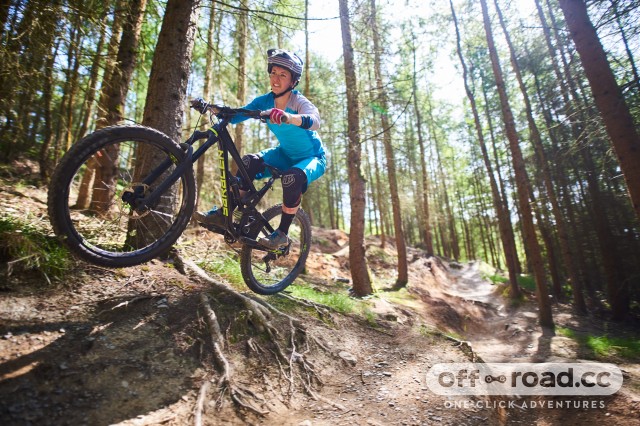 We are pretty keen to get back on this bike, it's got a go anywhere, do anything attitude with a penchant for rougher terrain which we’d like to exploit!

For more info go to www.saracen.co.uk