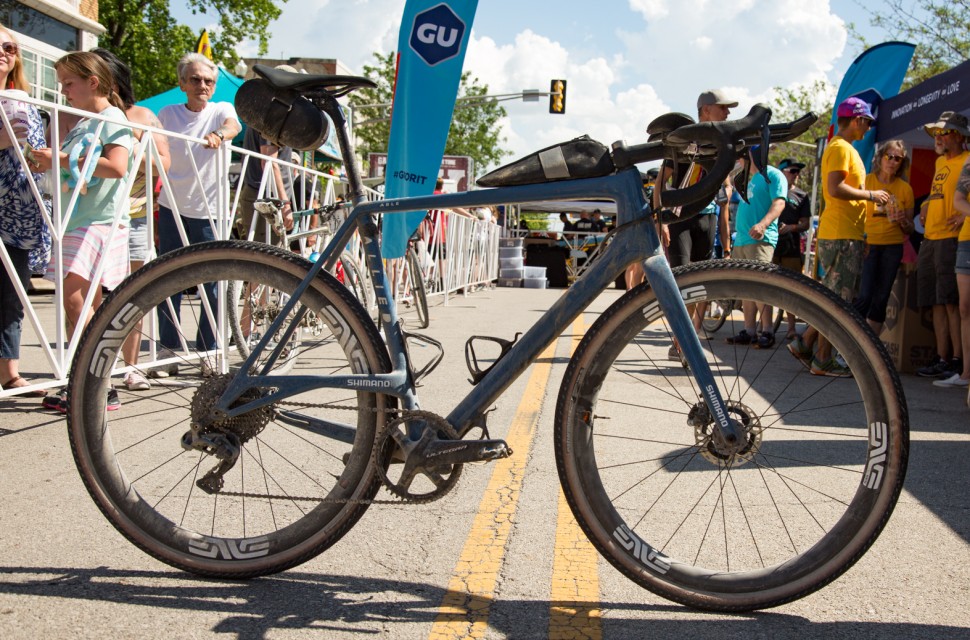 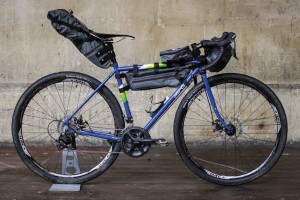 Exclusive - New Gravel Bike from Forme Spotted
The carbon Monsal is drop dead gravel gorgeous
First Look: Merida Silex
Gravel, adventure - whatever you call it, this bike aims to do it

You might have seen the new GT Grade and Open WI.DE. gravel bikes launched last week, but slipping under the radar was Allied’s radical-looking new Able. It didn’t go unnoticed in its debut race at Dirty Kanza however, as Colin Strickland and Amity Rockwell won the men and women’s races on the brand new Allied gravel bike. Talk about a dream debut.

All eyes were on Dirty Kanza this year as a clutch of WorldTour racers lined up for the 200-mile race that has become the must-ride premier gravel race, but in the end, their hopes of victory were dashed by less well-known riders Colin Strickland and Amity Rockwell.

Strickland’s win came from a solo attack at about the halfway point and he powered to a course record of 9:58:49, the first rider to manage a sub-10-hour time. That meant averaging 32.6kph and averaging 278 watts according to his Strava activity. 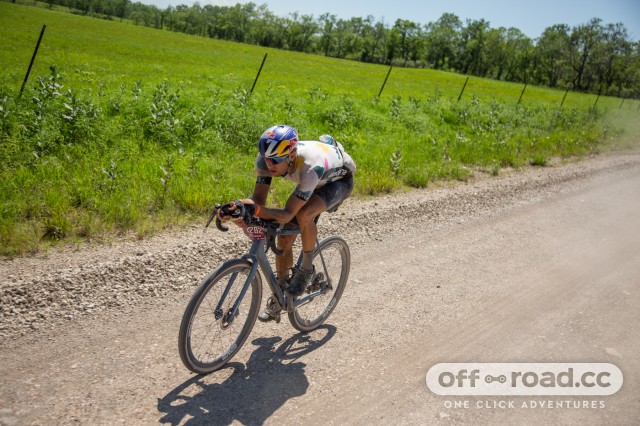 Many people speculated the likely men’s winner would come from one of the WorldTour pros, Trek-Segafredo’s Peter Stetina and Kiel Reijnen or EF Education First’s Alex Howes, Taylor Phinney and Lachlan Morton, but it wasn’t to be, though Stetina, Howes and Morton still rounded out the podium. 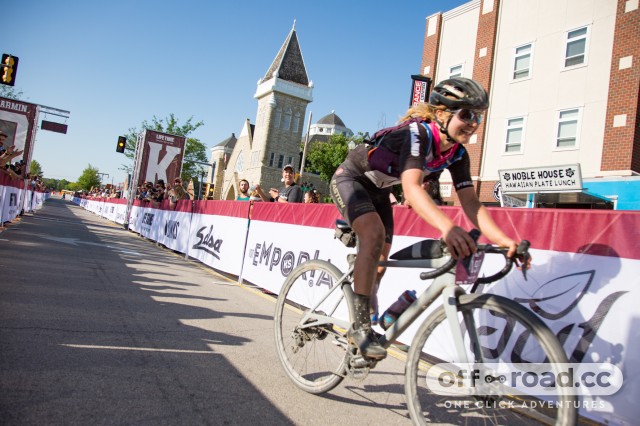 In the women’s race Amity Rockwell, previously a runner and only taking up cycling a few years ago had an incident-free ride and rode away from 2018 champion Alison Tetrick with 40-miles to go

“Each and every one of the 2700 riders that pinned on a number at this year’s event has our admiration,” said longtime organizer and Chief Gravel Officer Jim Cummins. “As they always do, the Flint Hills served up a number of challenges that Amity and Colin overcame with the skill and perseverance required of a DK champion. We’re proud to name them as the Queen and King of Kanza.”

The one thing Colin Strickland and Amity Rockwell had in common was the brand new Allied Able gravel bike they were riding. The US company was only founded a few years and builds every one of its carbon frames in its Little Rock, Arkansas facility. 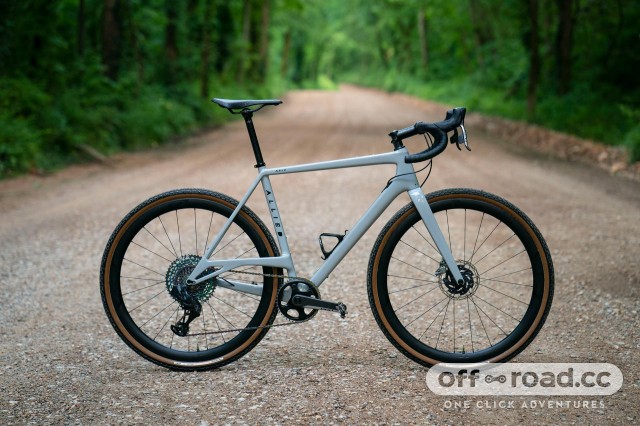 The new Able is a radical looking bike due to the elevated chainstays. Raised chainstays, sometimes called e-stays, were quite popular on mountain bikes in the 1990s, most famously with Alpinestars, but also Saracen, Scott, Kirk to name a few brands that dabbled with e-stays.

Allied has used an elevated driveside chainstay to provide space for wider tyres than its Allroad model, it’ll accommodate 700x43 or 650x47 tyres whilst keeping the chainstays short, just 420mm. Tyre clearance at the fork is a little more generous at 700x47 or 650x55. 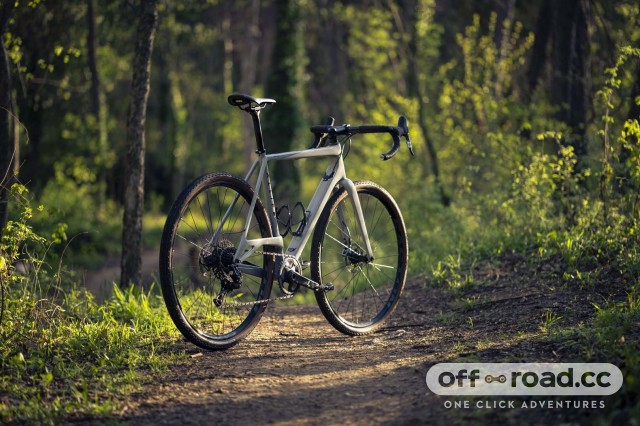 Moving the chainstays from their conventional position is something we’ve been seeing increasingly on gravel bikes ever since Open made a dropped chainstay popular with its UP back in 2015. The idea of elevating or

dropping the chainstay is simply to provide clearance for a wider tyre whilst keeping the backend short and maintaining a narrow pedalling stance with a road crankset.

The geometry stays close to the company’s current Allroad with the same 420mm chainstays, but it has slackened the head angle to 71-degrees with a steep 74-degree seat angle, a 70mm bottom bracket drop and a 66mm trail for most sizes. It has also increased the stack for a slightly less aggressive position.

The frame is only compatible with 1x drivetrains and other details include additional bottle mounts on the downtube, top tube mounts for a bag and hidden mudguard eyelets. All cables are internally routed. 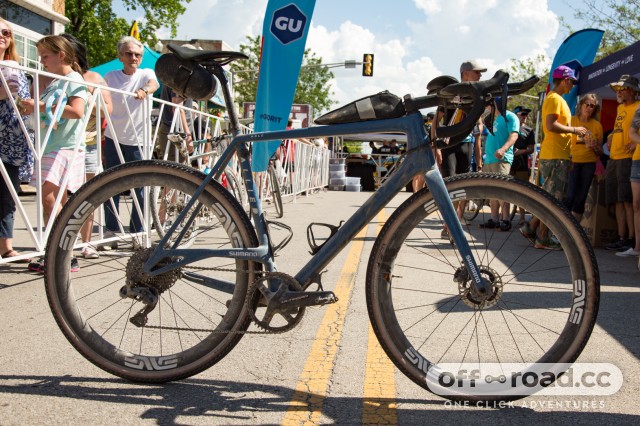 Colin Strickland's Allied Able combined a Shimano XTR rear mech and cassette with an Ultegra single ring chainset, Enve wheels with Specialized Pathfinder tyres, and perhaps most controversially among the gravel community was his decision to use triathlon extension bars. 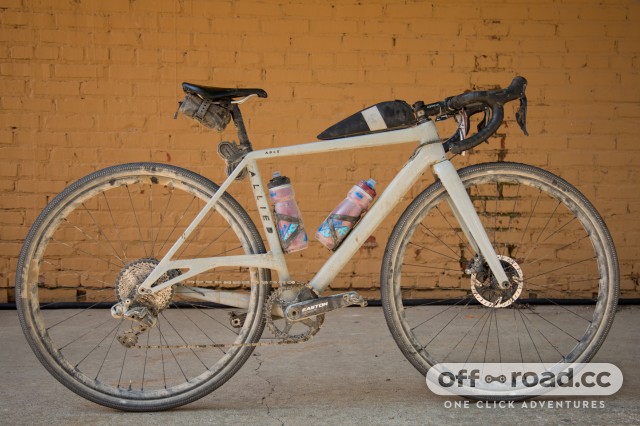 “The ABLE is a highly capable performance off-road machine that tilts more towards the “mountain skinny” side of the gravel segment. It can handle a lot of tire but still has an extremely short rear end,” says the company.

It sure looks interesting and we can't wait to get a closer look. Until then check out https://alliedcycleworks.com/pages/allied-able for more info.