Skip to main content
Log In Register
The Mmmbop gets a refresh for 2022. Here are our first ride impressions 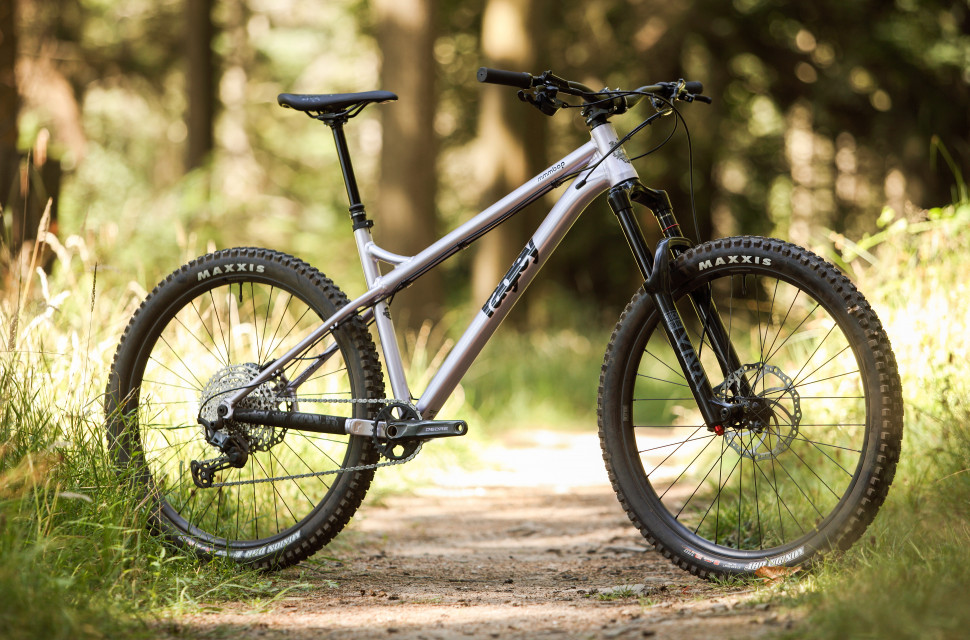 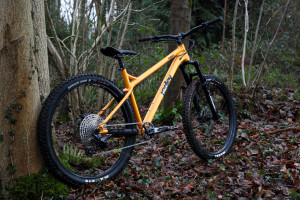 Graced with a name made famous by three blonde-haired pre-teens, the Mmmbop can be seen as the Ragley's Blue Pig alloy-framed sibling that's less destructive on the wallet thanks to some very similar angles and numbers. We've managed to wrangle a Mmmbop 1.0 ahead of the launch to establish where it sits among the best mountain bikes.

Ragley has labeled the Mmmbop as a bike that’s equally as happy rolling up to the start of an enduro stage (in the hardtail category, of course) as it is being razzed around your local woods. The brand says that it can be ridden all-day long but once the saddle’s dropped, the Mmmbop morphs from a comfortable and pedal friendly Jekyll to an all-out aggro Hyde, praising its outright versatility. 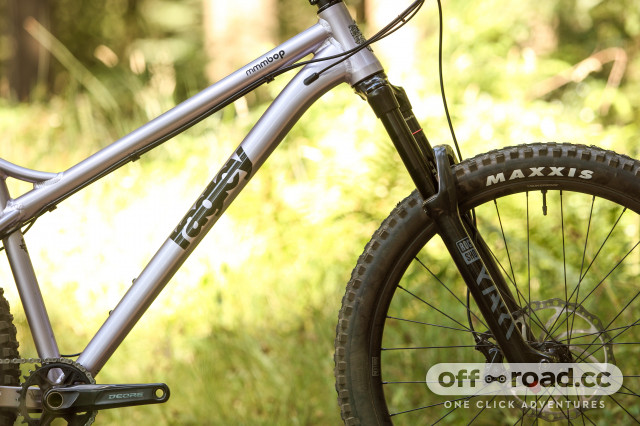 That is thanks to a mighty relaxed geometry. Upfront, the bike utilises a very slack 63.75-degree head angle paired with a 74-degree seat-tube angle. Our large test bike, features a 460mm reach, which isn’t anything too crazy these days but that slack head angle will certainly add to the bike’s overall wheelbase.

As it stands, the spec doesn’t look too shabby when considering the £2,000 price tag and with the rise in component pricing (thanks supply chain) Ragley has been rather wise with its choices. In terms of suspension travel, there's a RockShox Yari with 150mm of squish at the front. This fork uses the very same chassis as the Lyrik but with slightly less sophisticated internals and the RC damper, so it should be just as stiff, which is useful considering the bike's intentions. 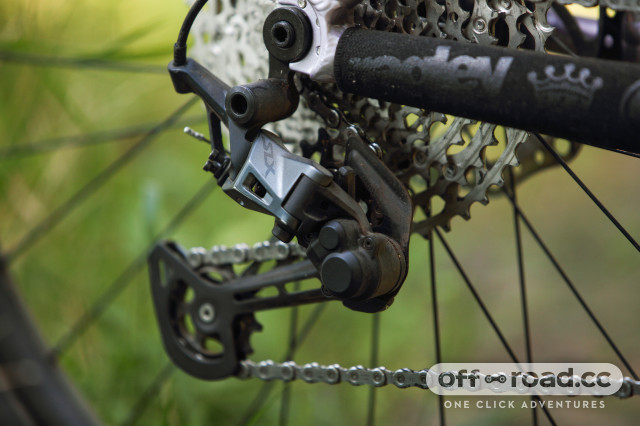 The drivetrain is Shimano's 12-speed SLX complete with Deore cranks, the former of which provides slick and reliable shifting. There's also a pair of wallet friendly Deore four-piston brakes at both ends. In reality, these stoppers are top performers for the cash and only lack some tool-free adjustment and are slightly weightier than the XT equivalent. The brakes operate together with a 203mm rotor at the front and a 180mm disc at the rear. 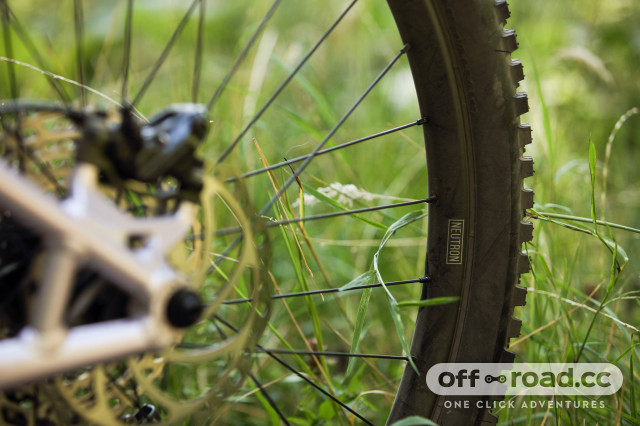 The Mmmbop 1.0 rolls on a pair of Nukeproof Neutron 650b wheels, which are wrapped with Maxxis rubber in the form of a 2.6in DHF at the front and a 2.6in DHR at the rear. Both tyres get 3C MaxxTerra compounds and EXO+ casings. This tyre choice is very much a no brainer for any trail bike. They roll reasonably well and provide reliable grip in a huge range of conditions. I have my reservations about the DHR personally, as I reckon it’s a bit lock up happy, but we’ll talk about that more a little later. 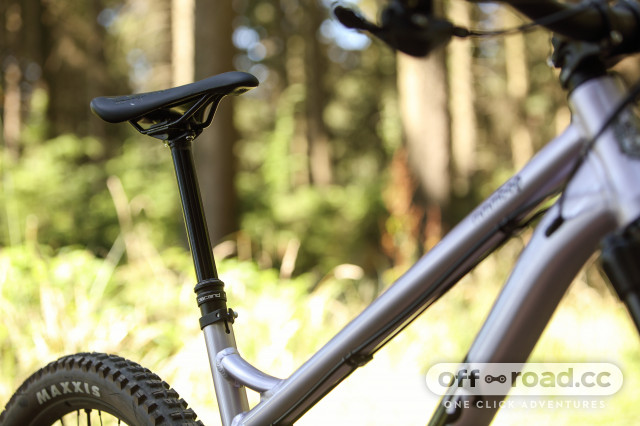 Ragley has spcced this bike with a long-travel Brand-X Ascend dropper post, which is internally routed through the frame. This large (and the XL) gets a very respectable 170mm of travel allowing the rider to shift the saddle well out of the way, while the medium gets 150mm and the small, 125mm.

This is all bolted to an alloy frame which is very tidily routed externally which allows for easy access to all of the hoses, making brake maintenance as faff free as possible. There's then space in the front triangle for a bottle cage and a UK friendly threaded bottom bracket.

I’m very pleased to confirm that Ragley’s description of, “perfect to ride all day but drop the saddle and the magic happens” is impressively accurate. That’s because when the saddle is up, the Mmmbop 1.0 is a familiar and comfortable place to be for starters.

While the Mmmbop benefits from some very wild geo figures, the reach and seat tube angle certainly aren’t anything to shout about but actually come as a credit to the bike, making it comfortable and welcoming when on the pedals. However, as it’s fitted with a wide 800mm bar and 50mm stem, it’s not all about the shape as these components help open up the cockpit, making fore and aft weight shifts a breeze. Although, if I were to nitpick, it would be nice to see the seat tube get a little steeper, just for a more assertive position over the pedals as - sometimes - it can feel a little like you’re behind the bottom bracket on steeper gradients. 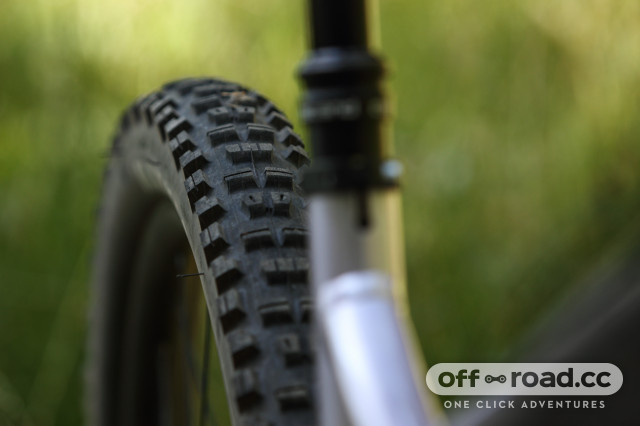 While pedalling, the bike is fairly efficient, only letting the slightly draggy DHR II tyres slow things down a touch. Impressively, there’s little bob through the fork so, as a whole, the Mmmbop is pleasant to wrench around before dropping into a descent.

On the descents is where the Mmmbop’s second personality comes out to play but regardless of its massively rowdy and grin-inducing character, it’s sensibly balanced when it comes to agility and stability. That’s a credit to that slack head angle, rather long-travel fork, those little wheels and rather taught 425mm chainstays. 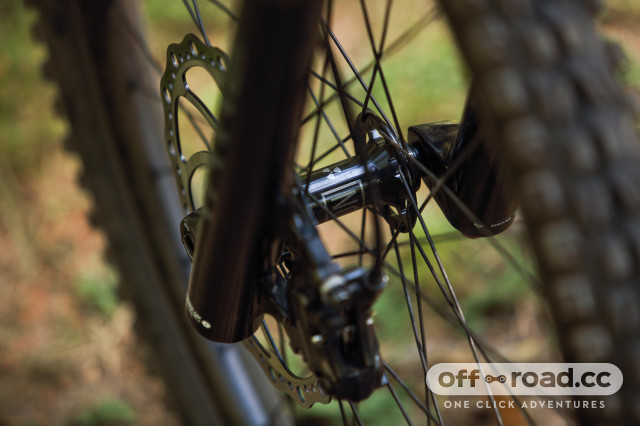 It’s been more than a year since I last experienced 650b wheels and it’s been refreshing above anything else, adding a whole lot of fun to the Mmmbop package. Tipping the bike into corners is done with ease, making sequential changes of direction very easily done and there’s tonnes of room over the back of the bike to plant weight when rolling into the steeps (which this bike is more than capable of dismissing).

The Mmmbop’s cornering prowess is aided by its short chainstays but what boosts the fun factor is that lock-up happy DHR II tyre on the rear of the bike. It’s a bit of a trail sin but inflating that tyre onto the back on a hardtail results in a rear end that’s quick to slide into berms or initiate a steezy Scandinavian flick. It may not be the quickest bike around a corner, but it's nothing short of exhilarating. 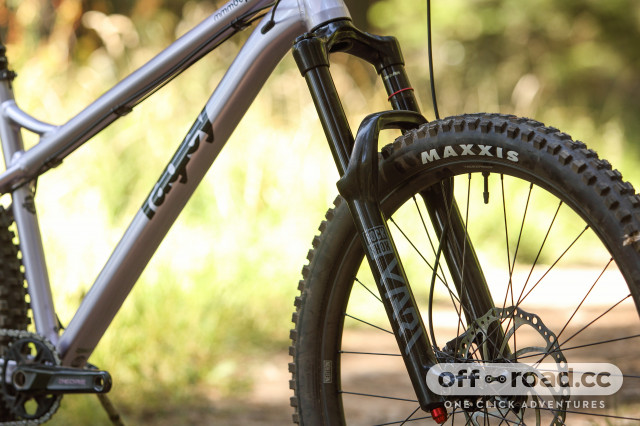 Then, the balanced ride comes in with that slack head angle that delivers much-needed sense of stability and confidence when the speeds increase. However, the downside of the 650b wheels get noticeable here. While the front end is nicely composed thanks to the mass of travel, the rear end can get overwhelmed as the smaller 650b wheel feeds back bumps slightly more aggressively than a 29-inch hoop. The stiffness of the alloy frame is certainly felt here, too.

Ragley has sorted this bike with some nice and incredibly slim grips which is great if you're looking for an as-close-to-the-bar feel as possible but the trade-off is that some arm pump can creep through. I'll be fitting it with bulkier grips shortly to reduce some of the vibrations and forces

What has really impressed me is that the Yari fork provides some positive support. Often on a hardtail with travel of this magnitude, its geometry steepens considerably as the fork moves through its travel. That is definitely the case here, usually occurring in techier and steeper sections but generally, the fork keeps the front end propped up really well, retaining the Mmmbop’s agro angles when they’re needed.

So there are some first thoughts on Ragley’s 2022 Mmmbop 1.0 after a few hours on the steed. Already, it’s shaping up to be a versatile but comfortable and seriously capable hardtail - but, for now, we’ll get on with testing this bike properly to bring you a full review in a few weeks.