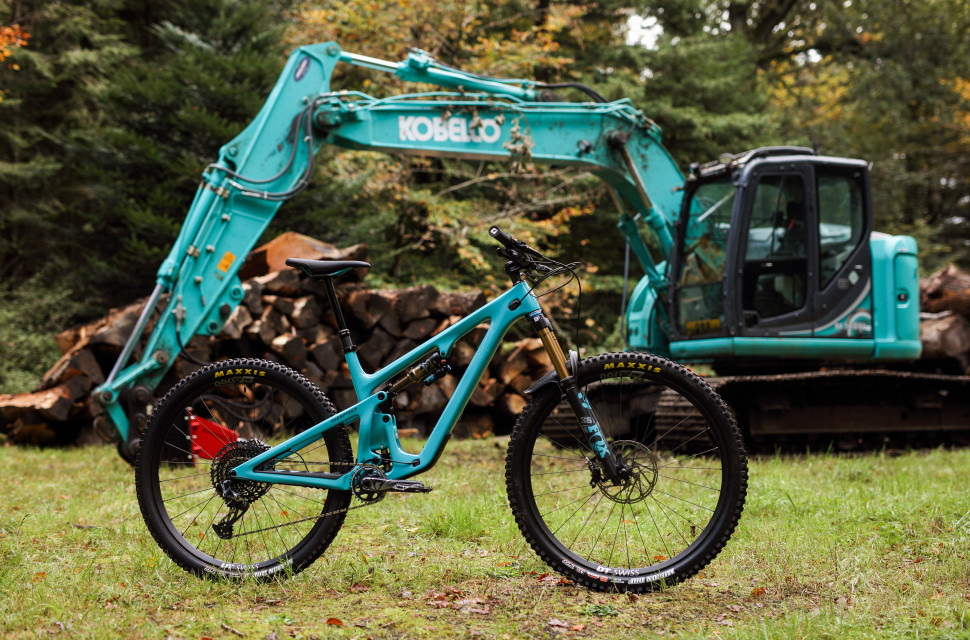 Yeti has given a number of its SB bikes an overhaul for 2023, introducing the new SB120, 140 and 160 not only with a tweaked silhouette but new Switch Infinity tech, a refined geometry and a new leverage rate and that’s just scratching the surface. We managed to get some time on the new Yeti SB140 LR T1 and here are our first impressions.

The letters ‘SB’ have been synonymous with Yeti for years now and the previous iterations of the bikes have been around since 2018, so it’s safe to say that they’ve got a little long in the tooth. Yeti is calling these new bikes an evolution of the SB, tweaking, improving and furthering its range.

Something that makes writing this First Ride super easy is that each of the bikes gets the very same changes, albeit in slightly different volumes - but we were invited by Silverfish to ride the new SB140 LR T1 (Lunch Ride, Turq 1), so let’s concentrate on that. 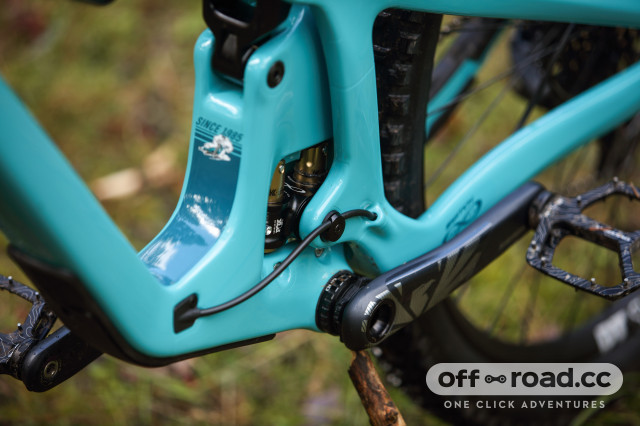 To start things off, the SB140 gets a threaded co-moulded bottom bracket, meaning that the BB shell and integrated ISCG-05 tab are moulded into the carbon while it’s being laid up. Yeti says that this is cleaner and simpler to service.

The bike’s cable management has also seen refinement as the internal cable routing now benefits from built-in tubes that guide cables from entry to exit. This is in a bid to eliminate rattle and cable rub while making internal cable routing easier to live with. Also, the seat tube is shorter to accommodate dropper posts with a larger drop. The brand says that most riders will be able to use a 150mm dropper on small frames, 175 on mediums and 200mm+ on large and extra large. 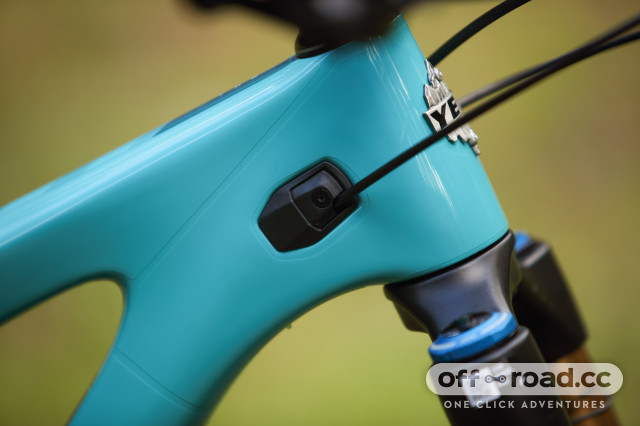 Perhaps one of those things you wouldn’t notice unless you were told is the SB140’s altered shape. The knuckle or lump in front of the bottom bracket has been raised and its angle has been increased. This boosts its clearance against potential impact and when combined with the new downtube protection that utilises two layers, one hard outer to shrug off flung rocks and the like, and a softer internal rubber that provides a cushion against the frame, overall frame protection has very clearly been upped.

Moving on and Yeti has fettled with the bike’s suspension linkage, this one adopting a two-piece extender that attaches the lower of the shock to the linkage itself. Two pieces clamp the shock while the whole platform has been slimmed down to reduce the stand-over height and increase the area inside of the front triangle for a water bottle. 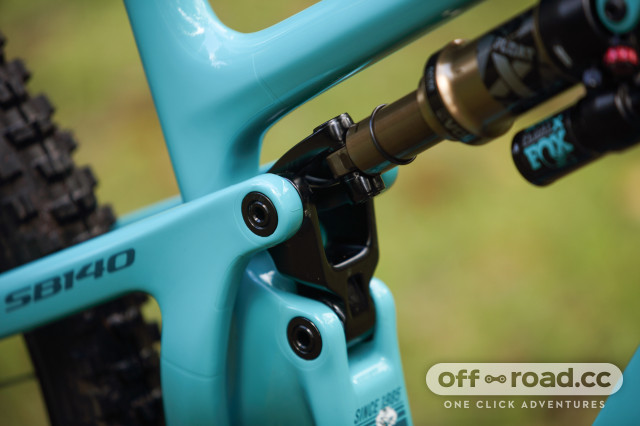 If the shape of Yeti’s SB bikes isn’t recognisable enough, the Switch Infinity is a sure-fire hallmark of almost any recent Yeti machine and, for this bike, the brand has seriously shaken it up. First off, the new unit gets a floating bearing design that aims to ensure perfect alignment, and the bearing races are connected radially and axially to increase stiffness and boost longevity. The new Switch Infinity uses more durable bushing backings and its stanchions come with a new gliding material to reduce friction. Its bearings are black oxide coated which better resists corrosion and there are aluminium dust caps to keep dirt away from the bearings.

What’s extra cool is that this new Switch Infinity is backwards compatible and can be fitted to any previous Yeti bike that didn’t use the SB100 or 115 Switch assemblies, and it’s available aftermarket.

With that, this new generation of Switch Infinity bikes has had its suspension kinematic refined, and this time, it’s tailored to better suit the demands of the SB120, SB140 and SB160. The SB140 features a 14% progression rate.

Finally, the SB140 has had its geometry changed. Before there wasn’t an awful lot to complain about but Yeti has given the bike size-specific seat tube angles that range from 77.5-degrees to 77.4-degrees, updated reach figures, size-specific chain stays that start at 436mm and stretch to 444mm along with balanced suspension travel to make up for its slack head angle.

We tested a large frame, which uses a 65-degree head tube, a 77-degree effective seat tube angle, and a 480mm reach. The chainstay measures 440mm and there’s a wheelbase of 1,264mm.

It's then built around a Turq carbon frame, Yeti's highest-quality carbon fibre that balances compliance and stiffness with light weight. 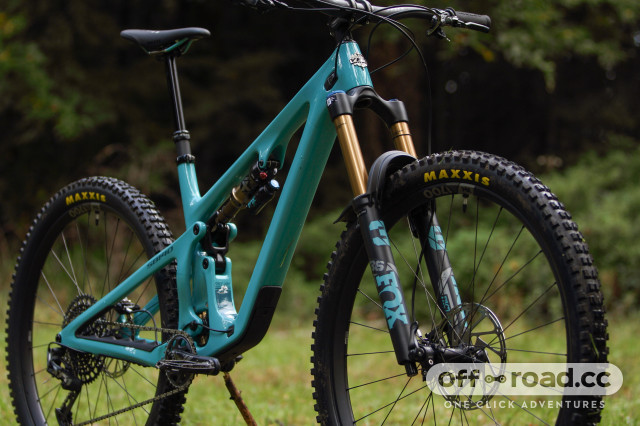 Spec-wise, this is a top-end bike, utilising Kashima coatings and very expensive gear. The front of the bike is graced with 160mm of suspension provided by a Fox factory 36 with a GRIP 2 damper, and that’s complemented by 140mm of travel at the rear that’s damped by a Fox Factory Float X. There’s then a SRAM GX Eagle drivetrain, SRAM Code RSC brakes slowing a DT Swiss XM1700 wheelset and there’s a Fox Transfer dropper post with 200mm of drop. This build is then wrapped up thanks to a pair of Maxxis tyres in the form of the classic DHF/DHR II combo in 2.5in and 2.4in widths respectively. The build we have for this first ride rolls on 29-inch hoops (available in 650b).

We took the Yeti SB 140 LR T1 to Wind Hill Bikepark to get a taste of what it was all about and first impressions hint towards it being a very solid trail bike. That’s partially due to that fancy Switch Infinity tech as it keeps the suspension sitting around the sag point when pedaling, even during particularly torquey moments. 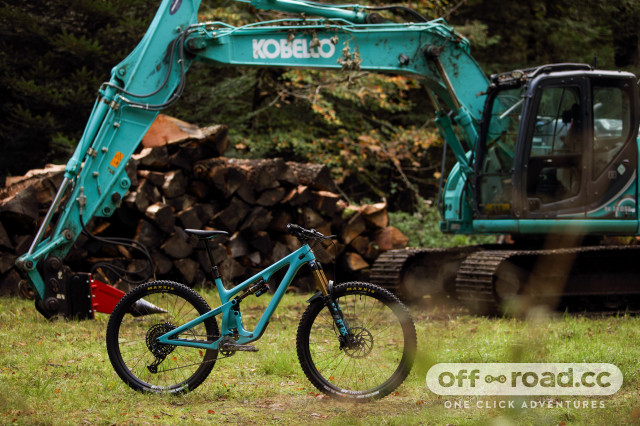 The linkage system minimises any unnecessary movement in the suspension, which directly results in huge performance when pedaling uphill. The SB 140’s ease up a hill was pretty impressive, even with the somewhat draggy DHR II tyre at the rear. It did a great job of staving off fatigue with a speedy feel as it gained elevation. The seat tube is pretty short so there is tons of space to install an even longer dropper.

Enjoyable pedaling is enhanced further thanks to a progressive but well-considered geometry. Weight is nice and central, and thanks to that suitably chosen chainstay length, there’s little need to shift around on the saddle unless you’re forcing yourself up something that’s near vertical.

Drop the front wheel into a descent and its trail-bike characteristic is super clear. While the 160mm fork and decent geometry inspire plenty of confidence and a solid amount of control, the rear end is super engaging and playful. It feels as if the Switch Infinity asks the SB140 to use its travel rather frugally, reserving it for the bigger hits resulting in a ride that feels as if it’s skipping over the bumps, rather than rolling through them.

While to some it might feel a little harsh, this makes the SB 140’s ride super lively and light rather than that of a sure-footed all-out bruiser. If you're one for making the most out of every trail feature, this bike will do exactly that. 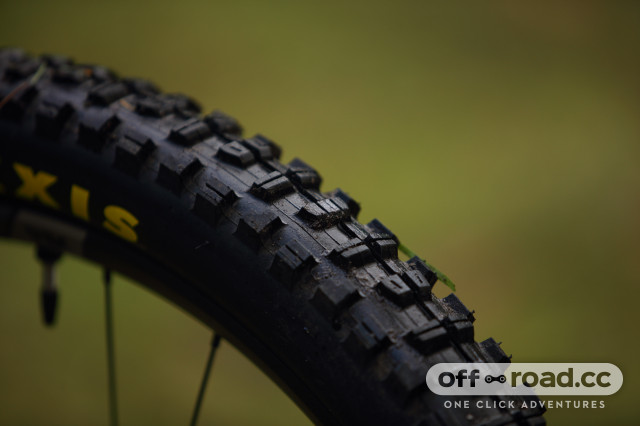 Helping the bike balance that very fine confidence/playful line, the SB 140’s rear end is nothing but supportive, as through berms and compressions, it remained well propped up - and when leaning into corners there was more than enough grip on offer. This makes for a very direct feeling rear end, too, as it never felt vague.

So after just a few hours on the new bike, my first impressions of the Yeti SB140 LR T1 are definitely positive. It's a bike that's full of character and plenty of fun if you're looking for a bike that's more of a scalpel rather than a sledgehammer. It's easy to pedal thanks to the updated Switch Infinity and its shape is nothing short of confidence-inspiring. Thanks to its refined suspension kinematic, it's a playful machine that makes the most of even the mellowest of tracks. It is expensive though, but definitely a lot of fun.

We'll be getting one of these in for a proper test very soon, so keep your eyes peeled on off.road.cc to catch the full review.