Skip to main content
Log In Register
As the soggy season starts, Jon turns to technology to stay fit 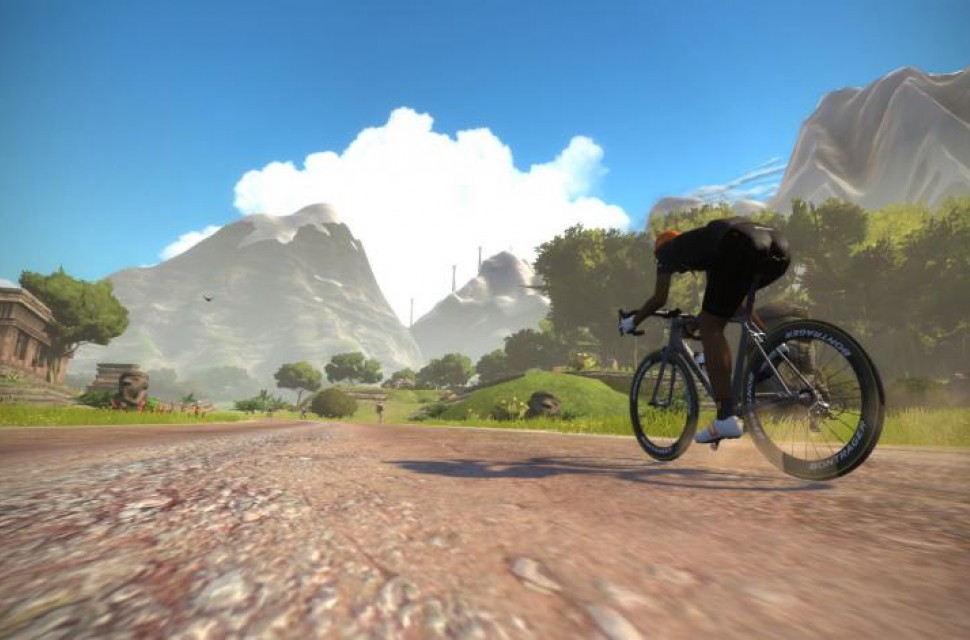 No matter how much we try and pretend otherwise, staying motivated to ride over winter can be tricky. In this series, Jon is trying out some different ways to keep on top of his fitness, skills and fun over the soggy season and rate which work best. First up, he enters the murky world of indoor trainers and virtual cycling thanks to Wahoo and Zwift.

I've got to admit that when I first heard of virtual cycling, I was deeply, deeply suspicious. Surely no-one in their right mind would choose to ride a bike indoors while watching a screen when they could be doing the real thing? My Damascene conversion came one Sunday earlier this month when, having finished the usual chores, I thought I'd go for a quick spin. After sticking my head outside into freezing sideways rain, the sofa and cups of tea suddenly looked like the preferable option for the rest of the day.

It's a failure of willpower I know, but it's hard to stay motivated when your reward for doing so is freezing various extremities off followed by a massive load of washing. Add in the fact that, if you only have time for an hour or so riding, you're looking at the same amount of time to get kitted up beforehand and get bike and body clean afterwards as you spend actually on top of the bike.

With this only being the start of the soggy season, I started to realise that if I could knock out a quick ride in the comfort of my own home, I might exit this winter with at least the same amount of fitness as I entered it with - or maybe even more. The only issue is that I hate turbo trainers with a passion. Having used them in the past they seem to defy the laws of physics by stretching time out like the event horizon of a black hole, with a minute seeming to last for an hour.

Zwift is supposed to be the answer to that tedium. It's a subscription-based service that creates an in-game virtual world, so that as you ride your turbo, your little avatar scoots about with other riders exploring the roads of the game world. Add in one of the new crop of smart trainers that can automatically vary the resistance and you can actually feel the climbs and descents of the Zwift world. By gamifying riding on your turbo, you should be able to a) actually enjoy it and b) be able to do it for longer.

A few emails to people in the know later and I had top-notch smart trainer and a subscription to Zwift ready to go. At £999, the Wahoo Kickr one of the more expensive smart trainers out there, but my colleagues at road.cc rate it as one of the best. It's a direct drive unit, so all you need to do it remove the rear wheel of the bike you're going to use on the trainer and then attach it to the unit. This latest version Kickr is compatible with everything from 135mm open dropouts to 12x148mm through axle designs. The trainer comes with an 11spd road cassette fitted onto the Shimano-style freehub body, but it's easy enough to switch it out if your bike has a greater or lesser number of gears. You can hook up a mountain bike to the Kickr, but the gearing might be a bit on the low side, so I stuck to a drop-barred adventure machine.

I found it very fast and easy to get up and running, going from getting it out of the box to fully set up in about 15 minutes. All you need to do it find a suitable location, fold out the legs on the Kickr, attach your bike and plug in the unit to the mains. After an equally painless download and install of the Zwift program onto my laptop followed by hassle free Bluetooth pairing to the Kickr and the included Wahoo cadence sensor I'd attached to the cranks, I was ready to get going and enter the roadie-Matrix. 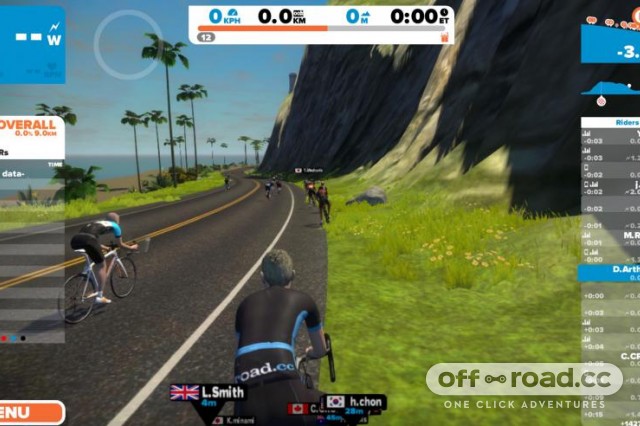 The nice thing about Zwift is that you can use it as a structured training aid by following workouts or you can just get on and ride as you see fit, taking in mountain or flatter terrain. As I only had half an hour to burn for my first session, I thought I'd try a workout. High-end smart trainers such as the Kickr have what is known ERG mode - short for ergonomic. In this mode, the unit automatically varies the resistance as you ride, making the amount of effort vary automatically as the workout dictates. That means you don't need to do any gear shifting or indeed any thinking at all, just get on with hitting whatever power output that Zwift demands of you.

I'm pretty new to any kind of structured training - I generally just ride my bike as fast as seems right or possible at the time - so this was a bit of a revelation. There are workouts ranging from just 30 minutes to hours long, so I started at the low end of the scale and I've quickly got into the habit of squeezing a quick 30 minute training session in before work and occasionally after. The game figures out your Functional Threshold Power - FTP - which is the averaged amount of power you can sustain over a continuous 45-60 minute session. This is then used as a benchmark for Zone-based training - in simple terms, the higher the zone, the higher the power you'll be putting out and the more suffering you'll be doing. Working in different zones will help your fitness in different ways, whether that be endurance riding or absolute flat-out anaerobic sprinting.

While I definitely enjoyed the workouts - being able to feel like you got a decent session on the bike in under an hour is a pretty good way to feel good about yourself and blow out the cobwebs  - I hadn't explored the other side of Zwift, which is much more of a social thing. While it's possible to join group workouts or even take part in an actual race, it's just riding about that is the bread and butter of Zwifting. The more you do, the more is unlocked for you, whether that be new outfits for your avatar or different areas to ride in.

I found it quite surprising how realistic it felt when riding about. As you go uphill, it gets harder and you have to shift down the block to maintain cadence. Just like in the real world, if you make some effort on the downhills, your momentum will carry you back up then, while you really feel the gradient spike as you enter an uphill switchback. Being surrounded by other virtual riders is also very novel - you quickly start resenting being overtaken and I found myself trying to keep up with people from all over the work and getting a little boost as I overtook others and a competitive pang of annoyance as I was overtaken in turn. You can also engage with the riders around you as they pass or ride with you, while using the companion phone app also lets you change the route on the fly and have an overview map as well as your rider's eye view on the main screen.

As it's possible to link Zwift with Strava, you can take your virtual taking-it-too-seriously into the real world too. It's nice to see your virtual riding complimenting your real riding and as fitness targets progress in the game, I've noticed myself having an easier time up the hills in real life as well.

While my guilt at not wanting to go out into the cold and rain hasn't disappeared altogether, it's certainly assuaged if I go for a virtual pootle instead, while for sheer fitness gains, doing a tightly structured Zwift workout is arguably a more effective way of training than the unpredictable real world.

Okay, it's not doing anything for your bike handling skills and while the game is nicely rendered and the virtual world is engaging as you sit and pedal, it's not like you're in the great outdoors, watching the world pass by. Admittedly that means you don't need to worry about rubbish driving or punctures and other hazards, so that might be a bonus for some.

Zwift's world is predominantly road based, with the odd bit of virtual dirt track here and there, so it'd be kind of cool to have some more gravel-style maps or even mountain biking, but that's not really a deal breaker - it's many, many times more interesting and engaging than sitting and staring at the telly on a conventional turbo trainer or simply disappearing into your own mind for an hour or so.

If you want to keep on top of your fitness over the winter in a serious way, a Zwift  subscription and a smart trainer is an amazing way to do that. Though the setup I tested isn't cheap, it's possible to get a setup for almost any budget, as in the video below.


Zwift itself costs £12 a month, which is more expensive than Netflix but undoubtedly better for your waistline. At first, I thought I simply wouldn't get on with it, but I'm starting to come round to the benefits and I've found it much more addictive than expected, both in terms of the workouts and especially the 'normal' riding. Whether it's worth four lunch meal deals a month is very much down to yourself and your budget, but I'd be tempted - mostly because I eat too many meal deals and my waistline is suffering as a result.

The Wahoo Kickr is a reasonably quiet, very smooth and realistic feeling unit that's simple to setup and allows accurate training. Is it worth a grand? Ask me in spring, when I'll see the results of an off-season full of training. Would it get more use than £1000 worth of winter bike? In my case, that's quite likely, but I could imagine that won't be the case for everyone. It's easier to leave it in your living room, regardless.

Score on the doors

Fun: 7/10 - I surprised myself with how much I enjoyed chasing virtual riders and power figures in a pretend world

Fitness: 10/10 - it's an incredibly time effective way to boost strength and endurance

Skills: 2/10 - it's not going to help your handling skills much, though being conditioned will help as a side effect

Value: 5/10 - Zwift itself isn't too steep, but a decent smart trainer is a big investment

Next time: It's time to hit some sweet jumps and learn some sweet skill as Jon explores the world of skate parks and pumptracks, presumably to get shown up by small children and hurt himself.