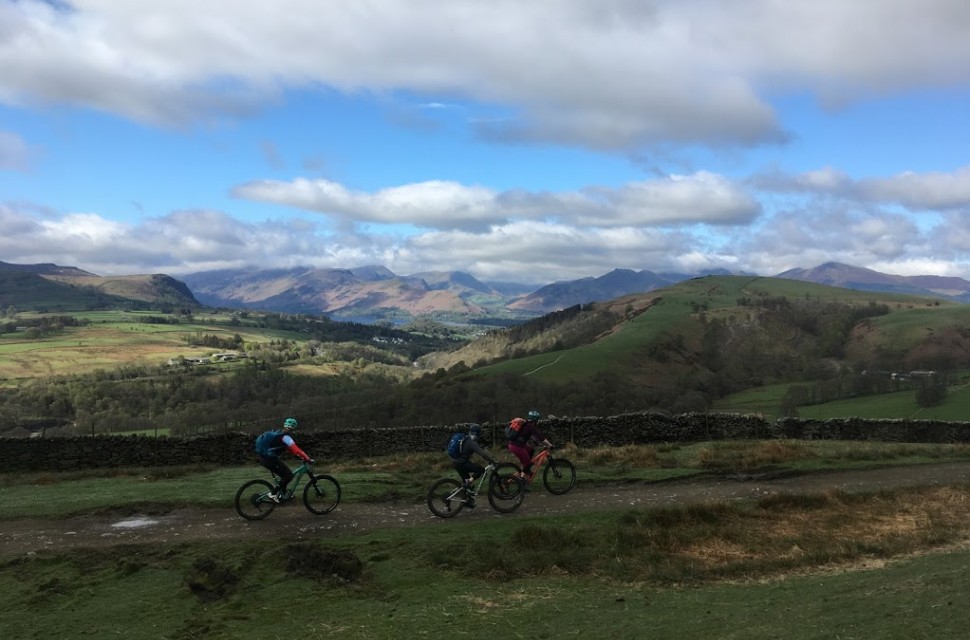 It’s easy to fall into the trap of booking our holidays in neighbouring countries, especially when the likes of France and Italy have so much to offer, but Anna reckons you shouldn’t forget about the gold hidden in our own mountains.

There’s a certain sense of disproportionate satisfaction to be had from finding incredible trails on our own doorstep, like the unquestionable sense of glory from finding enough loose change down the back of the sofa for a takeaway. The only problem is, once you know where it is, you’ll be wanting it all the time.

Let me start by introducing Endless Trails MTB; though the business is relatively new, owner, Julia Hobson, has been guiding plucky adventurers on bikes (and on skis) for some years now, previously being a regular guide with the likes of the Trans Provence. She has also been a brand ambassador for Juliana Bikes and Hope Technology for just as long, so it’s safe to say that she knows how to handle a bike as well as map. Endless Trails MTB was brought about to help riders rediscover the UK, from mixed group rides around the Peak District, to female only trips around the Lake District. I joined the latter to see what was in store.

Ladies of the Lakes 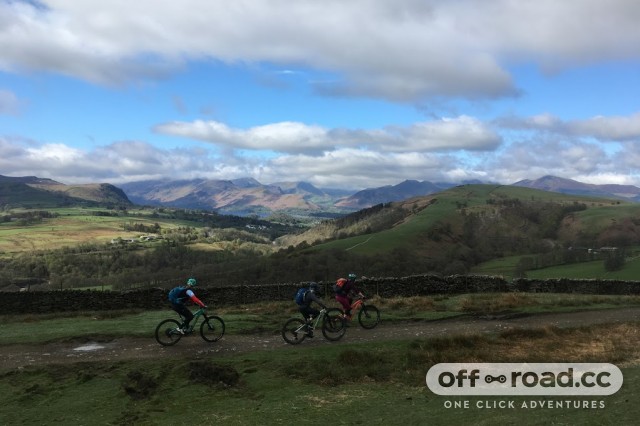 Day one began on Thursday, and we were treated to typical Lakeland weather; grey clouds and waves of showers, as if to prove a point about going on holiday in the UK. It’s no wonder there are so many lakes here. Still, we meet full of enthusiasm outside Wheelbase bike shop in Staveley and grab a coffee from the More artisan bakery. I was a good little tourist and ordered a few slices of Lakeland Bread to see me through the day; a hearty mix of walnuts, treacle and fruit in a breakfast loaf, served toasted with jam and butter. The clouds eased up in order for us to load the van and get driven to our first destination.

The roads in the Lake District snake around the valleys and creep up and over passes through clusters of mountains, seemingly taking the optimum route for views rather than efficiency of travel. As we delve into our first set of bridleways, it would seem the off-road paths have a similar attitude, but the gradients were gentle and sympathetic to our first day’s riding. We span through fields and moors the colour of honey roasted peanuts and tasted scents in the air that were just as sweet.

The showers had not dampened our spirits, nor the trails for that matter, as the hard packed, stony bridleways simply shrugged off the water without a care in the world. That being said, my feet found the odd puddle and even managed to plunge me into a knee-deep bog that looked innocent enough, much to the amusement of the group. A few technical climb challenges later, and plenty of fast, wide open tracks later, we reach the van, hook our bikes up to the trailer and move on to our hotel (via the pub, of course). The hotel’s hot shower was most welcome that night, as was the two-course meal provided. 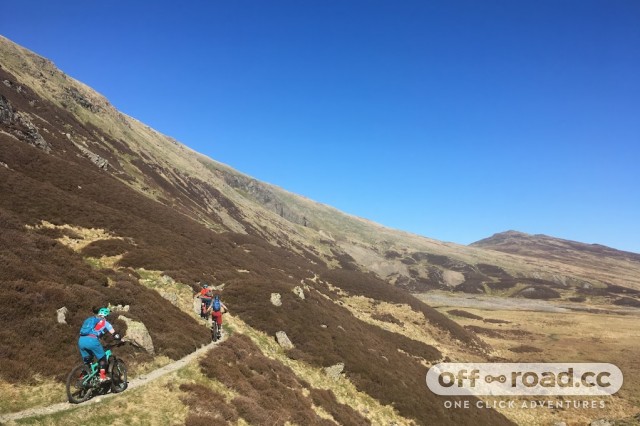 Day two would be the start of a big weather change; namely sunshine symbols (or custard pies, as assistant guide, Claire Bennett, refers to them) would line the weather reports for the rest of the week. To offer us a little rest, the second day was mainly an uplift day, allowing Julia to take us to some of the best descents around, but without the leg fatigue penalty. Somewhere along the edge of Derwent Water, we pedalled up a stunning road lined with mossy wood and boulders, giving us a taste of what was to come. Sunlight danced through the trees as if to distract us from the final pedal-powered push to the top of the hill. We stopped at the edge of a cliff, known as Surprise View, and admired the hills surrounding the lake. Julia showed us where we were going later that day, and before we knew it, we were there, lapping up technical bridleways that swooped around the hills like a rollercoaster, gentle descending to kiss the road and bouncing back up for some more action. We settled the stoke mid-morning in a nearby coffee shop in a quaint little village that was alive with colour. Houses were a mix of striking white cottages and grand, grey, period buildings awash with lush botanical gardens. A girl could get used to riding around here for sure. A girl could also get used to eight hours of sunny riding around stunning hills with exceptional company and a dinner waiting for her back home! 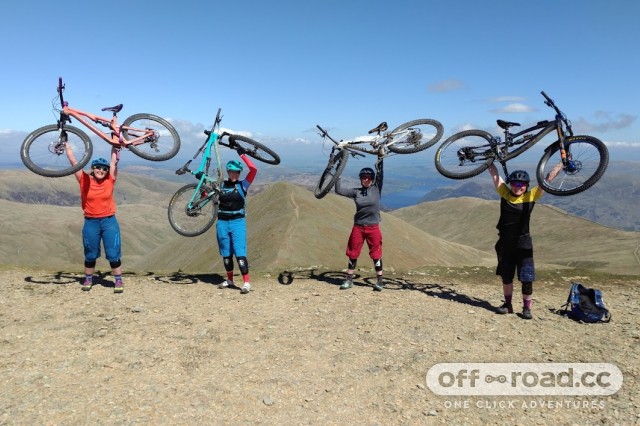 Day three came with the promised sunshine ready for our big day. ‘Highway to Hell’ plays in the van as we head to Helvellyn. The irony is not lost on us as we sing our own version of the song at the top of our lungs. Spirits are high again as we embark on a good three hours of hike-a-bike up the mountain, including comfort stops, lunch, and plenty of banter with baffled walkers wondering why on Earth we would be walking with a bike on our shoulders. One passerby said “I don’t envy you much!”, to which I laughed and replied “and I don’t envy you either!” as I watched him clop down the mountain constantly looking at his feet.

As we sat at the top of Helvellyn to admire clear views that stretched all the way out to the sea, I felt so very grateful to be there. The walk was a necessary evil, and a part of big mountain riding that I actually enjoy, as it gives me more time to admire the wildlife and the localised clouds that dance around certain hills in order to give you a sense of height. Our efforts would also be rewarded with a loose, rocky and technical descent. Some rock gardens were manageable, some were not, but both were a welcome challenge and something you rarely come across, even in the Alps. Multiple line choices awaited us as we all burned down the side of the mountain.

The open tracks soon melted into white ribbons of single track folding around the contours of Helvellyn’s base. If I had been teleported to this location, with the gleaming white trails, and water glittering in the distance, I probably wouldn’t think it was the UK. Then, into baron grey quarry, over giant Sospel-esque rock gardens, through some switchback corners, and all the way back down to civilisation. It was only one loop, but it felt like a day of many different rides. 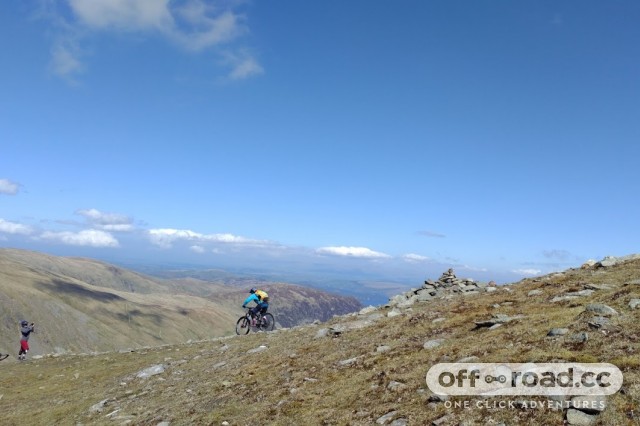 Day four is already a scorcher at 9am. California Soul aptly plays on the radio and sun cream lingers in the air as we head out into the hills. Today would be a chilled out affair with many stops in the shade. Julia has more bridleways in store, but as we have already found, bridleways are not to be sneered at around these parts. In store were more technical climbs and fast open descents down bed-rock and loose slate hills. They are a thrill of last-minute line choices and the occasional pop and jump off of boulders and natural drop-offs. This is cross-country, really, but not as I know. Never have I had so much fun (as well as being challenged) on what is effectively a by-way. I look back up at the jagged road I’ve just bumbled my way down, looking more like a large golden flight of steps than a road, and I wonder, can you really get a horse up there? I wouldn’t know, but man, am I glad I came down it on a bike.

Endless Trails MTB have set holiday packages on offer, this one is a take on Ladies of the Lakes (priced at £599 for three nights of accommodation and dinner, plus breakfast, lunch and travel included), but custom options are available. Perhaps it’s time to rediscover your backyard?