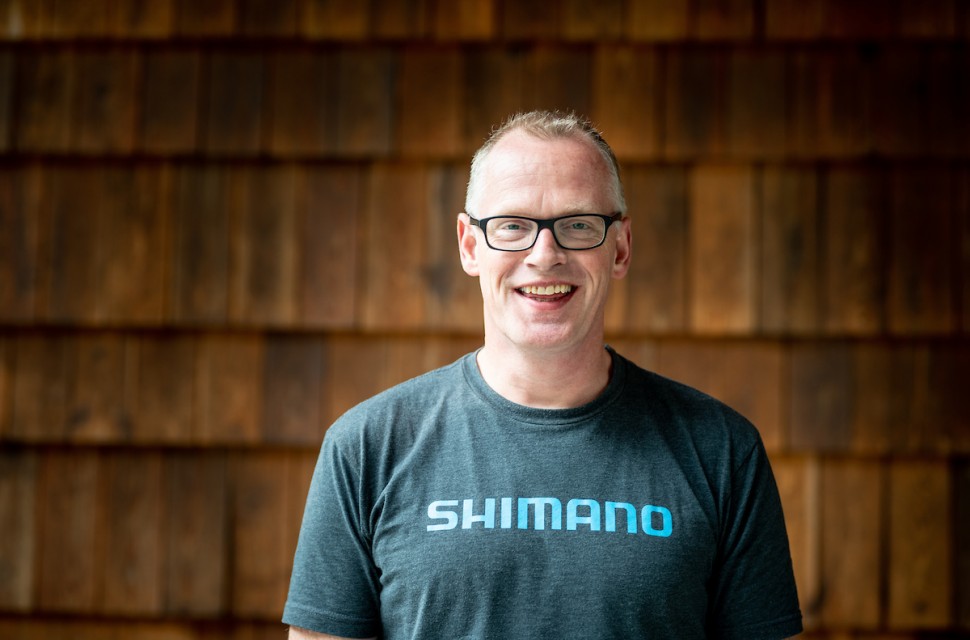 We sit down with Henry Bosch, Product Manager for Shimano Europe to find some of the finer details about the new XTR groupset. He answers our pressing questions on brake bite points and whether a 51 tooth cassette is just one-upmanship on a certain rival groupset.

So, Henry, tell me about you – what is your role?

I am basically the eyes and ears for the European market, I get feedback from OEM and professional riders. I also have daily contact with Japan and the US, we talk and meet often to discuss concepts, new things. I have worked for Shimano for 13 years now in different roles, I started in the service and warranty department, then spent time doing quality control and technical support. I did most of this for road and was involved in the design of Di2 when that was first launched. I am a mountain biker at heart though so I moved over to MTB’s 4 years ago. I now take care of all the mountain bike components for regular bikes and e-MTB’s .  I basically coordinate the different departments and the structure within Shimano Europe and Japan to come together to this end concept of a new XTR groupset. 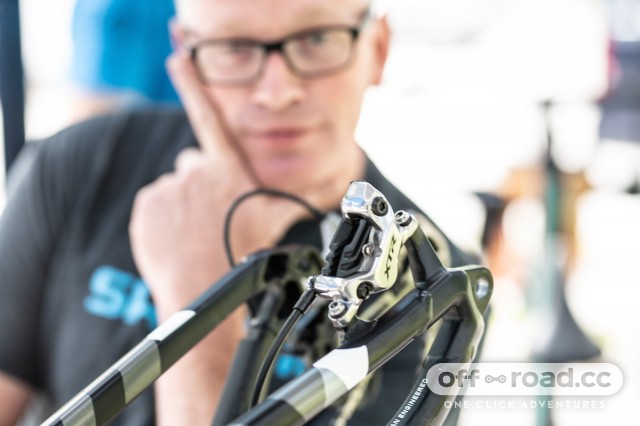 What was your involvement in XTR?

So, we started 2 years ago with the concept and to look into the market, this was pretty much straight after the last XTR groupset was launched. We looked around and asked, “is this what people are demanding, is that was the market expects and wants from us?” I coordinate the information between marketing, sales and we have quite some influence on the design. The design team in Japan have their R&D guys, a system engineer for the technical stuff and we talk to them about our ideas and market research.

What was the goal for the design of the new XTR?

Our goal was to make the best single chainring set up for mountain bikes. We wanted 12 speed with closer gear steps but we also knew there was a demand for a double set up so we needed to service this too. Italy, for example, is our biggest market for double chainrings, we sell lots there.  The challenge for us was to have a complete groupset, we wanted harmony between all the components, not only in design but also in functionality, that was our main priority. Shimano stands for durability and very good shifting and braking performance and that is a challenge to maintain that high level or to even bring it to a new level. 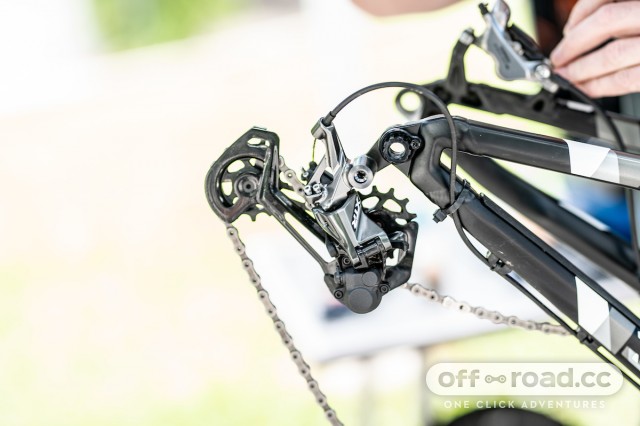 When the team set out to redesign XTR, did anything change along the way?

We always start with really futuristic ideas which are not always feasible but we keep those dreams in our back pocket and sometimes patent the ideas for future use! Sometimes those ideas are great but will not suit the current market, so this outstanding futuristic thing can be good but if it does not suit the consumer then it will not match without commercial values. We have to think about that too.

Can you give me a clue about what one of these future concepts might be?

Our readers will want to know – did Shimano just want to go one tooth bigger than a SRAM Eagle cassette?

No, not at all! That is not the case, that would be too easy to say “Oh, we will just have one tooth more than our competitor.” We tried to balance between efficiency and the shifting performance and what the rider needs on a cassette. Our main goal was to provide predictable gears for climbing, so we choose to have the same steps up in the biggest three sprockets, each increases 6 teeth in size. When you are climbing you should not expect a really big gear step up, you know what you are going to get basically. We knew with the old 11-46t cassette that the last gear there was more like a survival gear so new XTR changes that. 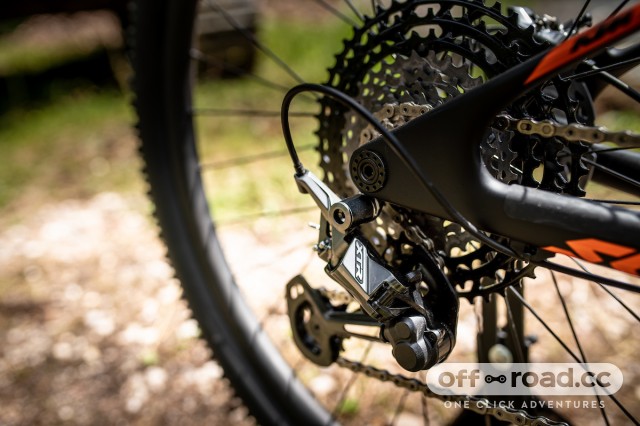 Why did it take Shimano so long to catch up with other brands where 1x and 12 speed are concerned?

I get this question a lot! We have a schedule when we have to renew XTR, so it was in the schedule for now, we offered already a quite big range of gears in the old version and it’s really difficult to jump in within one year to have a complete new groupset and we always want to make a complete groupset. We think out flagship model should be well designed well chosen configuration so maybe you guys have to wait a long time for us but we want it to be perfect. We study the market, we study what we could bring and get everything perfect for this new groupset.

Why did you need a new hub design?

We have two new technologies in our freehub, first, there is the Micro Spline so this has a different spline structure for putting on the cassette. We had to go for a new one as we now use a 10 tooth smallest sprocket, so it is smaller in diameter than the current freehub system. We also wanted to create a new technology for the future with better engagement so we have produced the silent hub (Sylence) so whilst you are coasting there is no noise. There is no longer pawls but now a ratchet system, reducing drag and of course there is no noise when coasting. 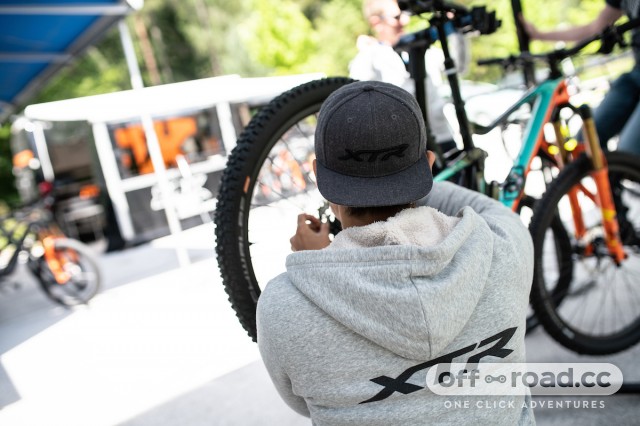 And that will be trickled down across the range soon?

Yeah, as you know with Shimano, when the system is good and the technology works for the market we will trickle it down for lower priced groupsets.

When will other companies be able to make the new freehub body?

We have started work already with DT Swiss, we are in the early stages of this. We want to have control of the quality and to see it if was possible for other companies to make the Micro Spline. It is really easy for us and other companies to make prototypes but mass production is a different cup of tea. We chose to work with DT Swiss first as they are the biggest player in top level MTB wheels and hubs. We want to control that a little bit but we are now in the stage where we are looking forwards with other hub and wheel makers to make this an open standard, or maybe we bring freehubs for them to mount on their system. Or maybe a licence agreement like we had for the centre lock system for example, that’s what we are looking into now and we hope to have answers in the coming months. 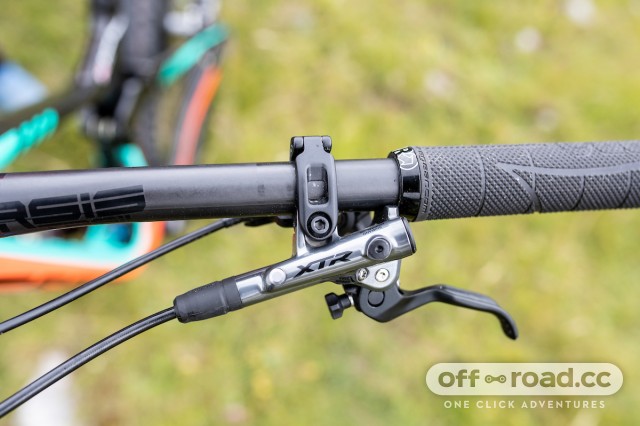 Has anything altered to the new XTR brakes to deal with the ‘wandering bite point’ seen on older XTR, XT and SLX brakes?

Yeah, a couple of years ago we had problems with XT, the lever and bite point was changing while braking. At that time we made some modifications to avoid that issue, it was not the case with every brake, it was to do with how it was assembled. But we call it LPS, lever positioning changing and it happens in every hydraulic system if it heats up. We have modified some structural dimensions inside with the master cylinder and we were able to correct this. We have also used different material inside the master cylinder to prevent materials changing shape when heated and to better deal with the different volume of oil when the system gets hot. The brakes of the new XTR had the most hours of testing put into them of the complete groupset, we took our time!

From the new XTR groupset, what part will most benefit the cross country racers?

I think the cross country racers will really like the light set up of the brakes and the option to change the cassettes so they can choose from the 10-45t or the 10-51t depending on what kind of course they are riding. Now you also have the Sprint Race in World Cup XC which is qualifying for the main race, riders can choose maybe the 10-45t cassette for the fast sprint race and then swap to the larger 12 speed for the main race to ensure they can climb everything. They have to use the same bike for both races but they can change components if they wish.

The same question but for regular trail riders?

Again, I think the brakes, the four pots are really controllable, predictable and they last a long time with good durability for the brake pads. They are easy to use, smooth and predictable. 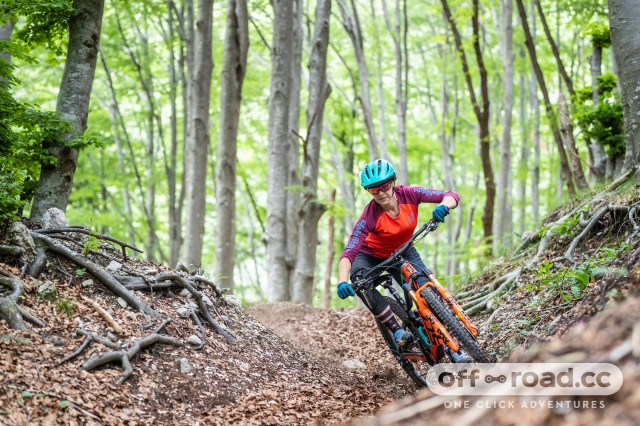 What is your favourite part of the new groupset?

I really like the crankset. The design, I am pretty proud of, but I did not do it all myself the complete team did it! It suits the character of the mountain bike rider more now I think. The brakes are also really good!

Why is XTR so good in your words?

I think it is the best on the market because of the right balance in the configuration we can offer, we offer a bunch of components within the XTR groupset so we don’t think that only one cassette could fit all riders. We see that the market changes and MTB riding has changed, bikes are more capable and this new XTR can fit any number of bikes and riders, helping the rider on difficult trails.

When will it be on sale?

That is a good question! The first deliveries will be the end of August and the beginning of September. We will first provide kit for OEM bike and you will see this a lot at Eurobike. In terms of in stores, people will be able to buy this around the beginning of October time.

And lastly, you don’t have to tell me all your secret but what is next for Shimano?

Ha ha, still we are busy with producing XTR Di2, we believe in Di2 and a 12 speed Di2 is on the way. We are thinking a little bit wider than just electronic shifting, so we want to have more features than just electronic shifting in Di2. So whilst electronic shifting is good on a 1x set up and does add value but it is not enough for us. We are thinking along the lines of connectivity with other components, so maybe with suspension or power meters. It is difficult to say when this will be released, we need to finish the launch of XTR, make any final adjustments, take a holiday and we will start on the new project!

All the details on the new drivetrain can be found here in our very comprehensive first ride article.