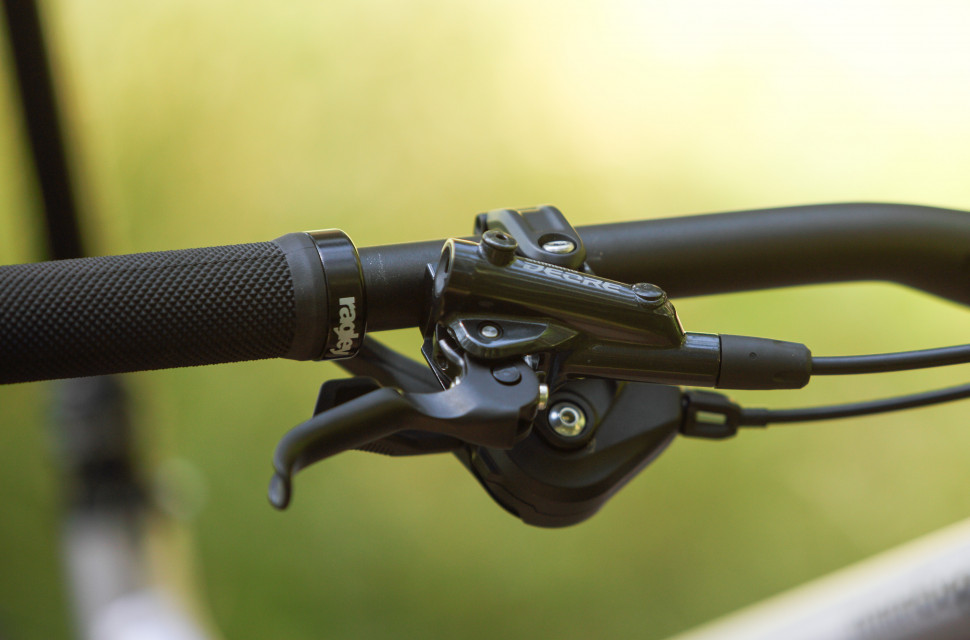 Bleeding brakes may sound intimidating but it really needn’t be. It’s a simple task requiring only a few tools and a bit of know-how. But a brake bleed is an essential maintenance task that could significantly improve the performance of your brakes, and solve a number of problems. Here, we’ll cover how to perform a bleed on Shimano, Hope, TRP, and Tektro brakes or any that use the one way bleeding system.

What is a brake bleed?

Bleeding your brakes is a simple service carried out to either remove air from your brake fluid, or replace the fluid entirely.

At the very least, full brake bleeds should be done on an annual basis as brake fluid can become contaminated over time. However, there is a range of situations that may lead to your brakes requiring to be bled, such as after trimming or replacing your brake hoses or after the installation of new brakes on a bike with internal cable routing as these require the hose to be removed from the lever and/or caliper, posing an opportunity for air, or contaminants to enter.

How do I know if my brakes need bleeding?

A sure fire way to find out whether your brakes are due a bleed is to give those levers a feel. They should feel sharp and powerful. If the brake lever feels extra squishy or spongy, or if the brake’s bite point moves away from the bar the more often you brake that means there’s air or a contaminant in the system and it’s due a bleed. This also goes if your brakes aren’t as powerful as they once were, or they simply don’t feel as great but your brake pads are a-ok.

How is bleeding Shimano, Hope, TRP or Tektro brakes different?

These brake brands use a different method of bleeding, relying on a cup that sits at the lever, rather than a pair of syringes that pushes fluid from one end to another. 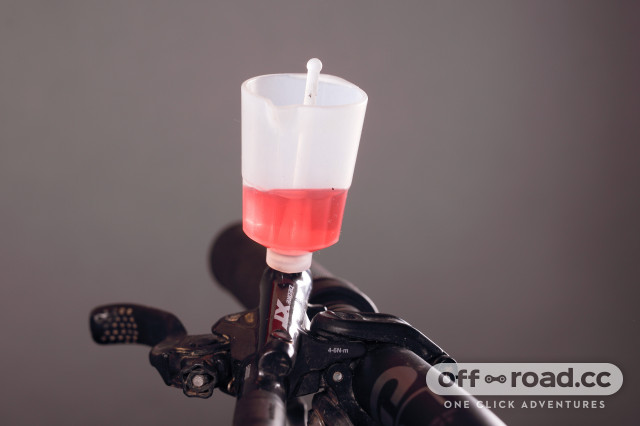 The benefit of this style of brake bleed is that is very easy and it doesn't take long at all. It also allows for the lever to be bled independently, which can be a savior during race weekends. It's also easier to top up fluid if the funnel ran dry mid-way through the process.

If you're bleeding SRAM brakes or similar, those use a different method. Here's how to Bleed SRAM, Hayes and Magura brakes.

What do I need? 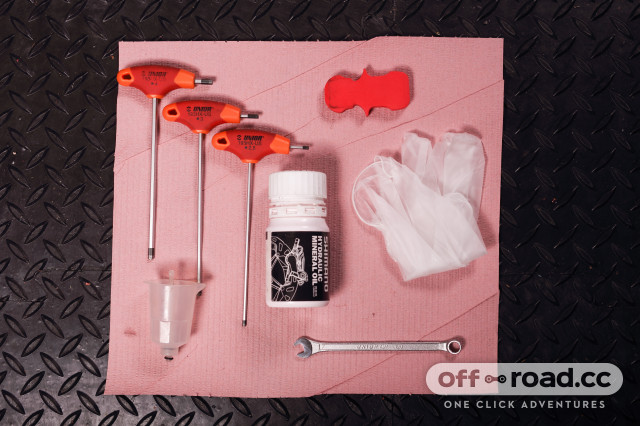 Now, this isn't the method that's recommended by Shimano but it's one used by a number of mechanics out in the field. I follow this method to bleed any brake of this style and each time, I've achieved a perfect bleed without too much effort. This method also makes topping up extra fluid easier.

For the curious, Shimano recommends that you install a syringe filled with fluid at the caliper, and push the fluid through to the funnel.

Both methods work with all brakes that use the one-way bleeding system whether that's mountain bike, or gravel brakes.

First off you’ll need to arrange a clean work area but most importantly, remove your wheels from your bike and take the pads out of the caliper. It’s best to place these well out of the way of where you’ll perform the bleed as a stray drop of any brake fluid on a pad or rotor will likely destroy all performance. 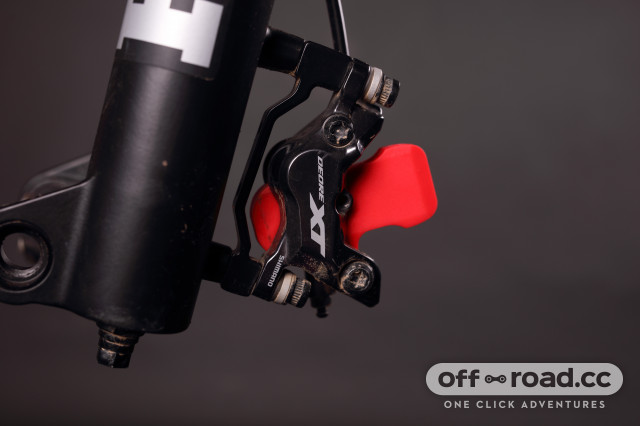 Insert your bleed block into the caliper and adjust your lever so it is parallel with the ground.

2. Prepare the lever and cup

Next, set your lever so that the bleed port is parallel to the ground. Then, using your 2.5mm Allen, or the correct Torx (depending on the model and brand of your brake), remove the bleed port screw and the o-ring that’s sat inside. 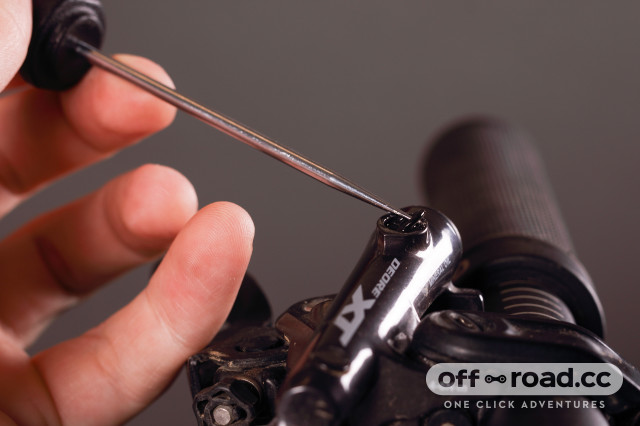 Then screw in the cup and fill it partially with the correct brake fluid or mineral oil. 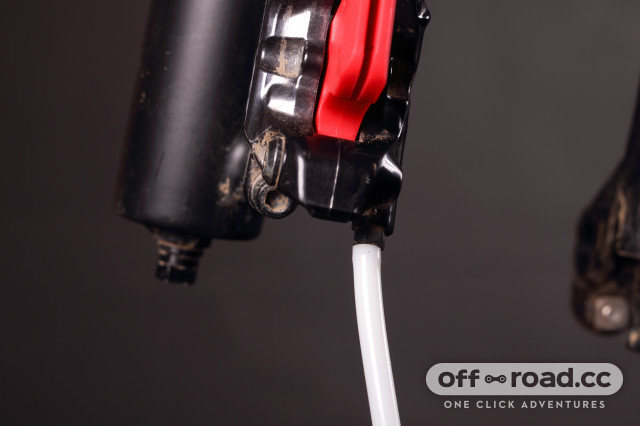 On the other end of the tubing, you'll need something to catch any flushed fluid. Here, I've taped a nitrile glove to the end of the tube. You can also zip tie an old fluid container or similar, and place the tube inside. 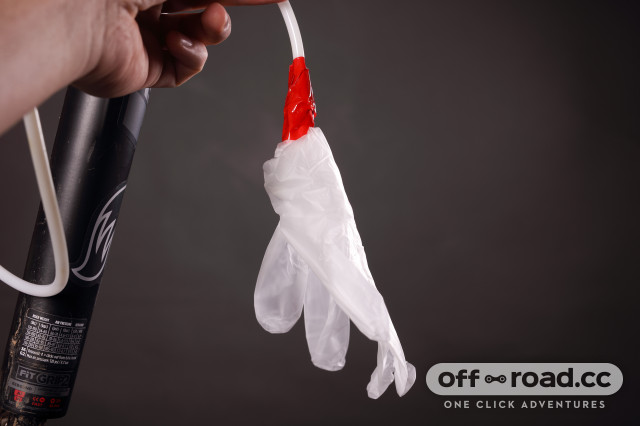 TRP and Tektro brakes require a threaded adapter attached to the surgical tubing. This screws into the bleed port and should be included in your bleed kit.

This is where you actually start pushing air out of the system. First, using the 7mm spanner, open the caliper’s bleed port only turning anti-clockwise a quarter turn. Then squeeze the lever. That should push out a mix of fluid and air or if you're bleeding from dry, it'll get the fluid moving through the system. Tighten the bleed port, release the lever and repeat until no air bubbles are present in the surgical tubing or until the fluid runs clear.

Tightening the bleed port after each pull of the lever will stop any air from being sucked back into the system. 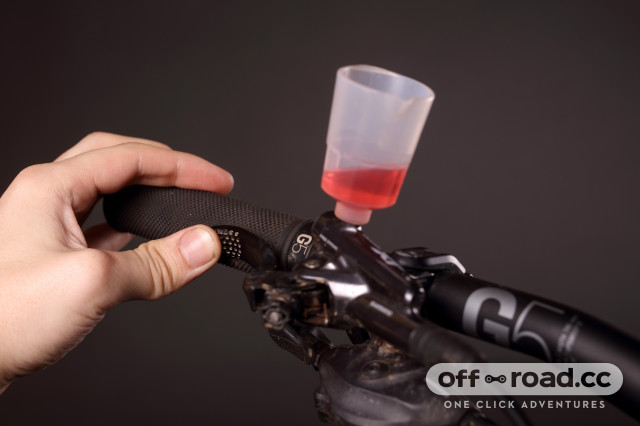 Once you’re happy that there’s no air coming from the caliper, nip up that bleed port and focus your attention toward the lever. Here, simply squeeze and release the lever until bubbles stop rising into the cup.

To make sure every stray bubble is out, tap on the hose and the lever body as you go.

With no more air finding its way into the cup, that’s your bleed done. Pop the plunger back into the cup and place all of the hardware making sure any o-rings are back where they belong. 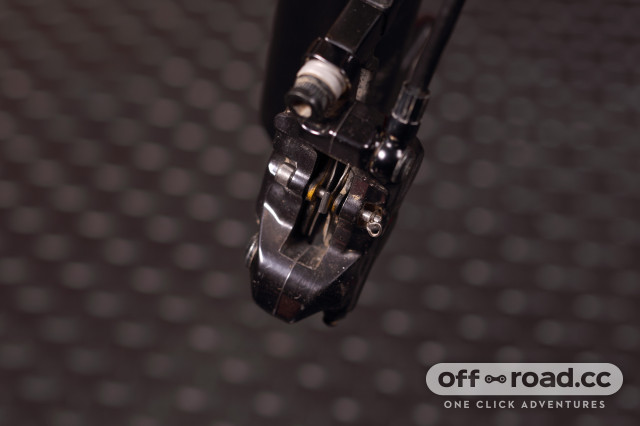 Before putting the wheel and brake pads back, remove the bleed block and use your brake cleaner (or similar) and paper towels to clean any excess fluid from the brake lever, caliper, and any other areas of the bike where it may have dripped. Reassemble and you're ready to ride.