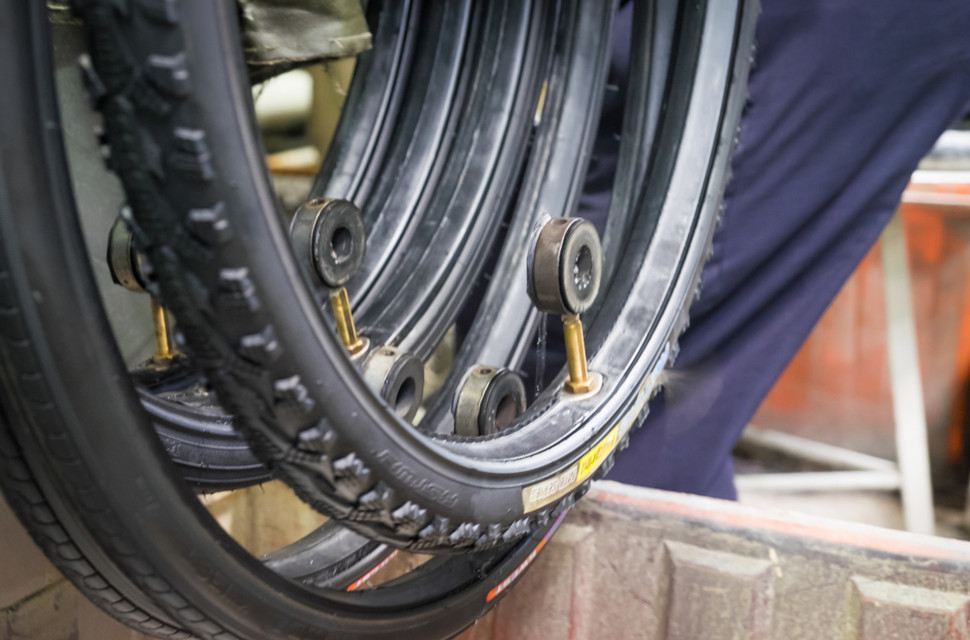 Few of us ever skid to a halt and think about how our bike tyres came to be. Steve Thomas heads to the Kenda factory to find out what exactly goes into designing and producing bike tyres and tubes.

Tyre design and production is a lengthy process, with treads, compounds, and sizes planned anywhere between 1-3 years before completion. Market demand and manufacturer's production trends are key in determining the vast majority of things. However, there is always room for innovation and new technology.

Like many other manufacturers, Kenda can make just about anything required, be that an ultra-durable tyre, a super grippy wet weather tyre, or even an ultra fast-rolling strip of rubber. However, ultimately, budget and demand determine what we eventually ride. There aren't many of us that would buy a super-fast tyre that lasted for just one race or something purely for slippery, wet roots; thus, it's a game of compromise. The aim for many manufacturers is to produce the best possible tyre for all-around use at a specific price point.

From tree to tread 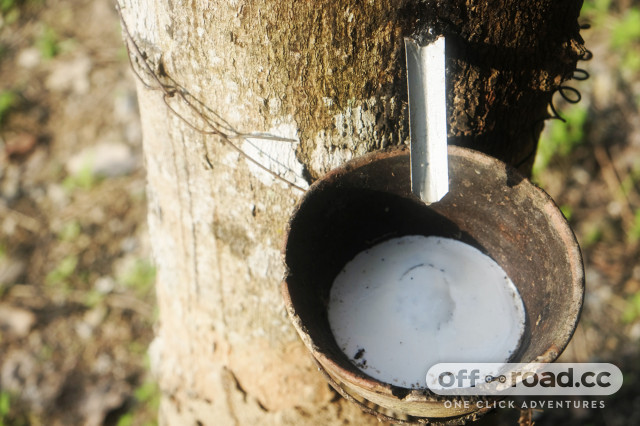 The whole process (for Kenda and many others) starts just after dawn in remote areas of Thailand and Southeast Asia. This is where rubber trees grow and are tapped (the bark is cut and a drain put in for the sap) by hand to slowly extract the raw latex. The latex is dried and mixed with chemicals before being shipped in blocks to the Kenda factories in Taiwan and elsewhere in Asia. 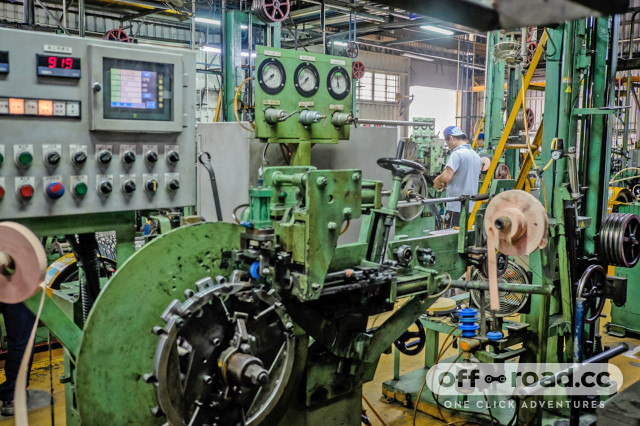 The initial "black magic" comes from the chemicals added when the rubber reaches the factory. The chemical additives vary depending on the requirements of the desired compounds for the final tyres, which in turn determine the characteristics. Some prime additives include sulfur, carbon black, antioxidants and zinc oxide. These are mixed with natural latex and synthetic rubber during the initial blending and mixing stage.

Carbon black is what gives the vast majority of tyres their colouring, and consequently, their durability. For coloured tyres, a white carbon additive is used, but it does lessen a tyre's wear time. 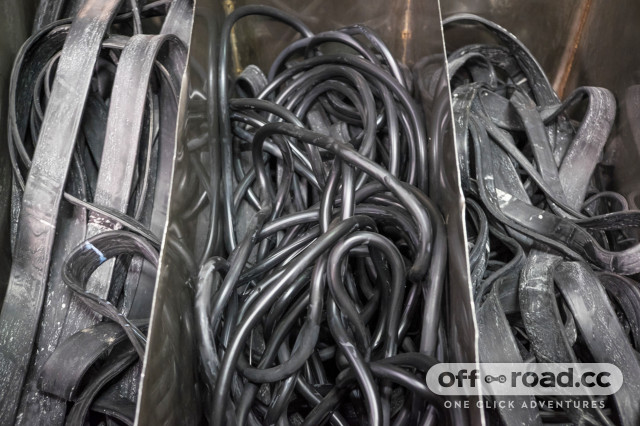 The actual compound of this blended rubber is what gives a tyre its basic properties. As a very general rule for mountain biking, a soft compound offers more grip due to the deformation of the tyre as it interacts with the ground, thus it's considered to have a higher rolling resistance. Whereas harder compounds tend to roll faster but offer less grip - and this is where the compromise between speed and grip lies.

Dual compounds are also widely utilised to strike a balance between these contrasting characteristics, using the harder compound in the centre of the tread and a softer mixture for the sides.

When it comes to the choice of wired or folding tyres, it's mostly a weight consideration for the end-user. Folding tyres are lighter and have higher tensile strength due to the aramid fibre used in the foldable beading, which costs more and takes longer to produce.

TPI (Threads per inch) is something we all hear of but probably don't know what it actually means to a tyre and its characteristics. Basically, the lower the TPI, the wider the denier of the tyre casing, meaning that more rubber is used, making the tyre more durable and heavier.

Higher TPI's offer a faster and smoother ride and make for a much lighter tyre as less rubber is used. The TPI is determined by the denier of the casing to which the rubber is applied. At this stage, Kevlar sheeting is often used to improve puncture resistance.

Vulcanisation is another rubbery word banded around, which has nothing to do with Star Trek. Vulcanisation is when a tyre is put into a mould, has a tube placed inside and then heated to 175 degrees Celsius. It becomes partly liquidised and has its tread formed by the mould - and it's fascinating to watch. The tread pattern determines the ultimate ride sensation and grip.

Once they actually resemble a tyre, they all go through a curing process to seal and treat the finished article, ready for the trail – well, almost. 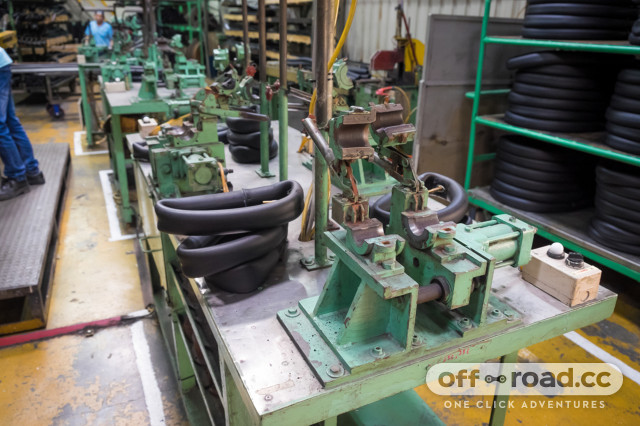 What is really surprising is the hands-on element of the process – from start to finish.

Small farmers tap their own rubber plantation in Thailand to supply latex to commercial giants like Kenda, from where you would imagine that robots and the likes would take over – but no.

Sure enough, there is a whole lot of machinery involved in the numerous processes of making tyres. Still, each one of these machines is hand-operated, checked and observed. Some 70,000 bicycle inner tubes and 20,000 tyres come out of this single factory on an average day of production. As a group, the total daily tally runs to 395,000 inner tubes and 258,000 tyres – Kenda branded along with other very familiar labels.

That's a whole lot of rubber, and what's more, every single tyre and tube are hand-checked. Every inner tube is inflated, checked and then left pumped up for 24-hours. This heavy hands-on element is commonplace within the tyre business – meaning that every single tube you trash and every tyre you procrastinate over buying is probably handmade. It gives a whole new appreciation for those black strips of rubber that ground you to the trail.

When your treads are shredded 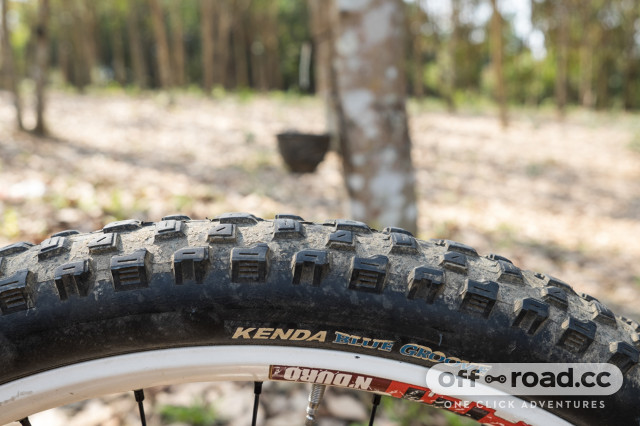 There was a time when a cyclist would often just toss their shredded inner tubes and even the odd expired tyre into the trailside bushes, which is not the way to go about things.

Tyres and tubes need to be recycled, and many local council recycling plants will accept them. However, you could always get creative and use them in other ways, such as creating straps, wraps and bike hangers or for more bike-related artistic use – making inner tube bags and pouches.

Our big brother road.cc has a great story on recycling options here.