Skip to main content
Log In Register
If you're after a new route to test in the west of Scotland, we've got you covered 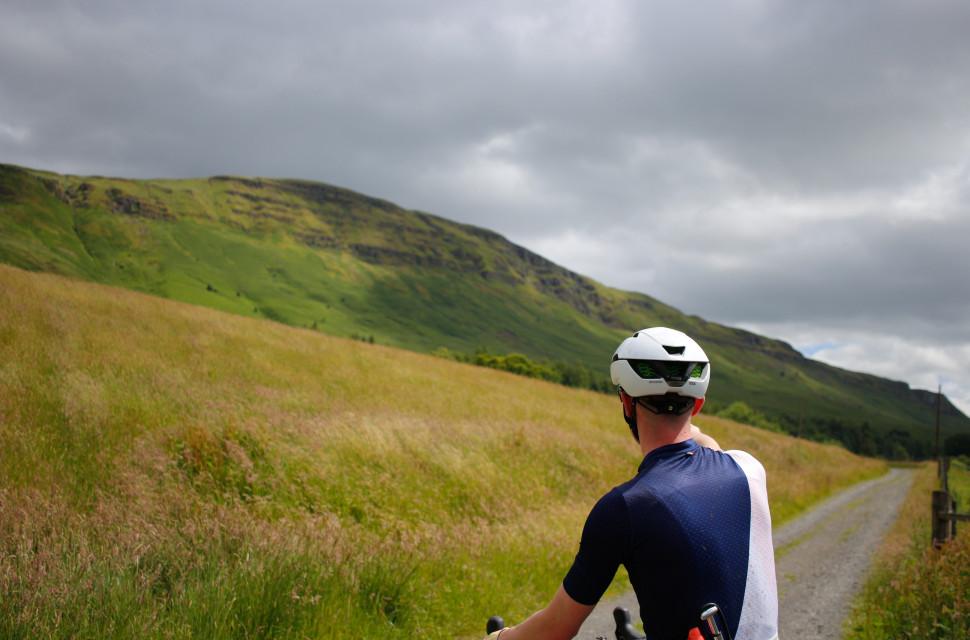 Gravel has become big everywhere and the UK is known for the variety of it. It's not so much riding some smooth, hardpacked dusty roads here, but instead, gravel often encompasses anything that is... well not tarmac. And to ride that, you don't always need to travel far.

The following route collection has been crafted with both local and visiting gravel riders in mind, and it introduces you to some spectacular and interesting bits around the Scottish "Dear Green Place", more commonly known as Glasgow.

I hope this route collection will inspire you to see the area beyond its tarmac roads and realise that you don't have to always travel to further away locations, such as Aberfoyle, to enjoy some pristine gravel. Prepare for cemetery crossings, gates, fence jumping, and steep hills that you might prefer to walk up - these routes will for sure make you feel excited about the new places you can discover when diverting from the familiar roads.

And as a note, even though Scotland enjoys the Right to Roam, meaning you have the legal right to ride almost everywhere, do still respect the landowners. If someone tells you they don't want you on their land, it's probably a better idea to find an alternative way than get into an argument.

Kicking things off with possibly the best gravel around Glasgow - Whitelee Windfarm.

A windfarm might seem like a strange place for cycling at first, but once you've been there once, you want more. And there is actually plenty more because this area has 130km of trails you can explore under the whooshing blades of the wind turbines. It does require a little bit of tarmac riding to get to Whitelee, but this mega loop takes you to the small lanes and as many off-road surfaces as possible - and you can easily cut sections off or make this into two or even three separate rides, depending on your distance preference. 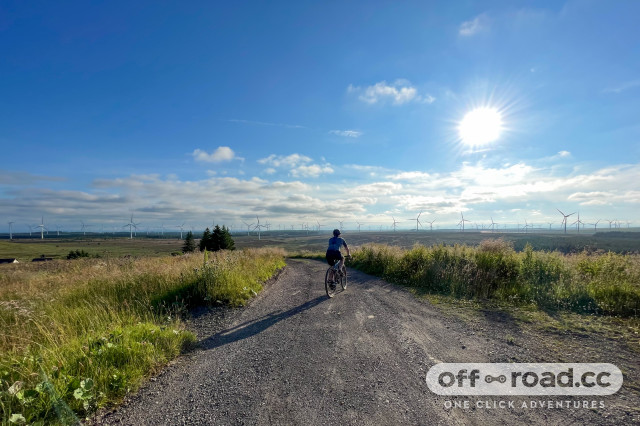 Most of this route is within Whitelee Windfarm, which is a great spot for riding all year round. In addition to Whitelee, this long loop takes you to some smaller gravel trails and fields, and the southeast part of this route offers the first coffee break option, the Heron Cafe and Farm Shop. After Heron you will be on gravel for quite a while before the windfarm visitor centre, but you can cut the distance by not doing the loops that I have added - although they're quite fun to do. 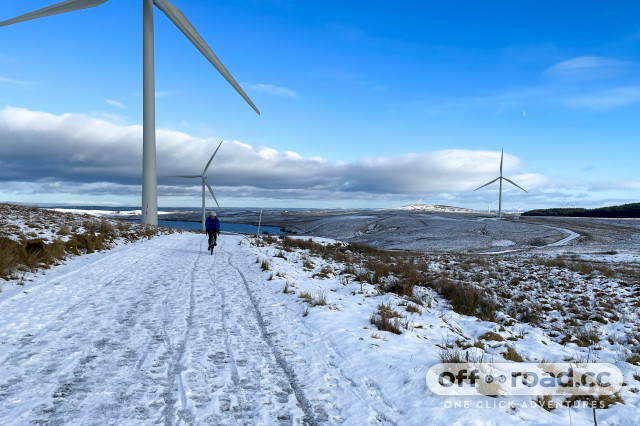 For a second coffee break, Whitelee has a lovely visitor centre which houses an exhibition of the wind farm (which happens to be the largest in the UK!) and a cafe with excellent empire biscuits. It is worth checking the opening times before your visit - the place is usually shut over the winter months and you don't want to get to the door and only realise that your hope of having a nice hot cup of coffee isn't gonna happen... The visitor centre also has a car park and even electric car charging points, if you wish to only do a shorter distance.

The last third of the route takes in some more urban trails that can be busier with walkers and dogs. I truly recommend these lanes to avoid the roads - they can make you feel like you're nowhere near Scotland's largest city.

Kilpatrick hills are a go-to gravel destination on the north side of river Clyde. If you wish to avoid riding too much on the tarmac, you can also jump on a train to Kilpatrick train station, although at the time of the writing this service requires you to change trains twice... But the ride to the hills is not bad at all, as you can take a traffic-free cycle path most of the way. 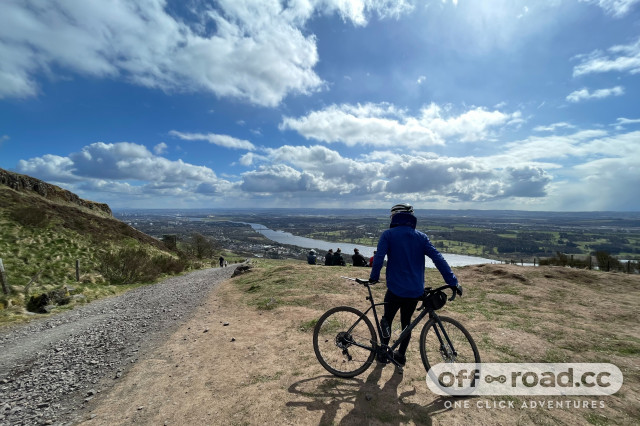 Because Kilpatrick Hills is a very popular hiking destination, a good idea to plan your ride at a time when not half of Glasgow is there. The busiest spot is near the start of the gravel section, up Humphrey Road,  which is a three-kilometre-long climb with about an eight per cent average gradient. It is at first quite a nice slog, but towards the end, you will be wishing you had proper granny gear on your bike. However, you'll quickly forget the pain you experienced when gazing at the amazing view at the top - the reason why so many people get up this hill. 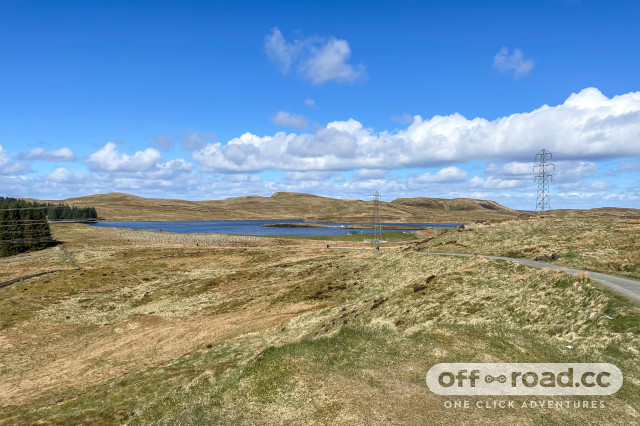 After the climb and the views, you will be riding a loop of the gravel (optional) on the hills, before heading east to connect to the John Muir Way and finally, to West Highland Way and looping back to town. In case you wanted to get a train back to Glasgow, Milngavie has a train station. Otherwise, you can ride along the canal all the way back to the city centre.

This loop is possibly more exciting for locals than visitors, but if you are looking for some technical training, then this is a good, short(ish) loop to do. Starting off at Cathcart train station in Glasgow's southside, this route takes you first through Linn Park, and across a cemetery, before you hit some technical singletracks and a punchy, and often slippy, climb. Once you've conquered all of this, you're in for a treat through Coulter's Wood (there are a couple of gates to go through on your way) and finally, Cathkin Braes. 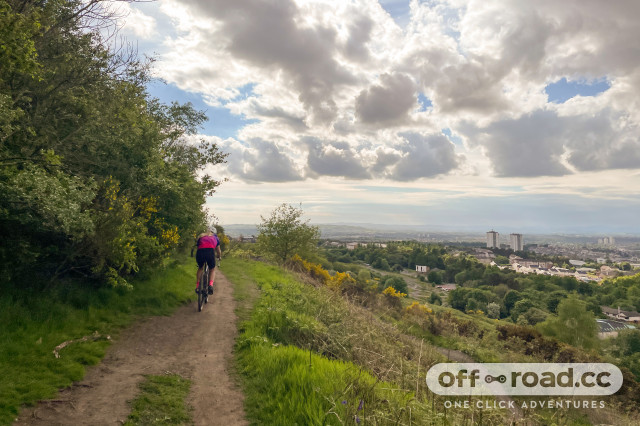 Cathkin was home to the 2014 Commonwealth Games and has trails to every taste. For gravel riders, it's maybe safest to stick to the blue loop, which is included in this route. It includes the highest point in Glasgow, a spot that is a must for a photo stop before rattling down the hills again. Repeat the loop as many times as you wish, and then head back the same way you came. 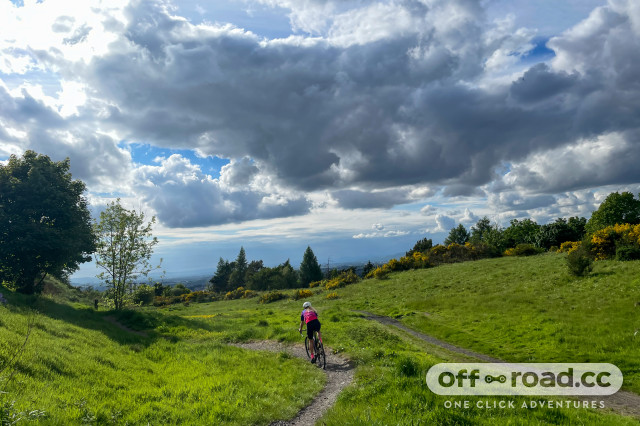 This route is one for great views but no super-fast pace, because there are plenty of gates and especially during the summer holidays, hikers, on the paths. After getting to Milngavie along the canal path, you will join the official West Highland Way route, which would eventually get you all the way to Fort William if you felt like covering the whole 100-mile route. Despite cycling on it being totally ok, this is primarily a hiking path, so bear that in mind when passing people - and you might prefer to do this route outside school holiday times. 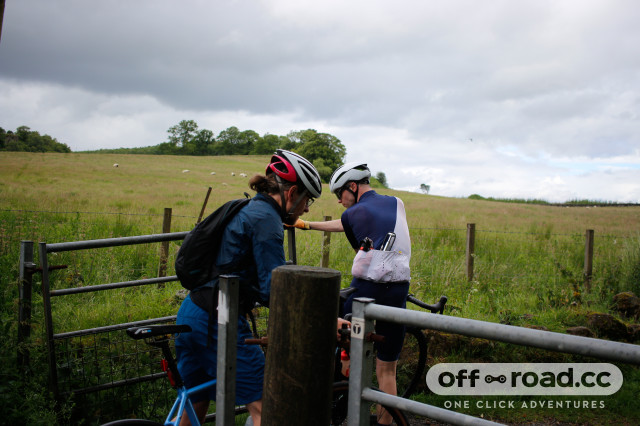 The route starts from Glasgow's central George Square, from where you will make your way to Milngavie and the starting point of the West Highland Way. If you are tight on time you can take the train to Milngavie, so you don't have to ride on the tarmac as much.

You will be quickly on some awesome gravel paths, tracing Allander Water. Make sure to stick to the route because the signage for WHW will direct you to different paths. About halfway through the route, you get to Killearn, a cute village with a few cafe stop options. My recommendation is the Kitchen Window. They do amazing cakes and lunch and the hills view from their outdoor terrace is absolutely stunning (and you can also keep an eye on your bike easily).

From Killearn, the route climbs out to some grassy fields of the Campsies, and then follows a relatively smooth gravel path the rest of the way. But a word of warning here - this side of the route is filled with gates so if you hate a stop-and-start ride, this is not ideal for you - but I guarantee the views are great... 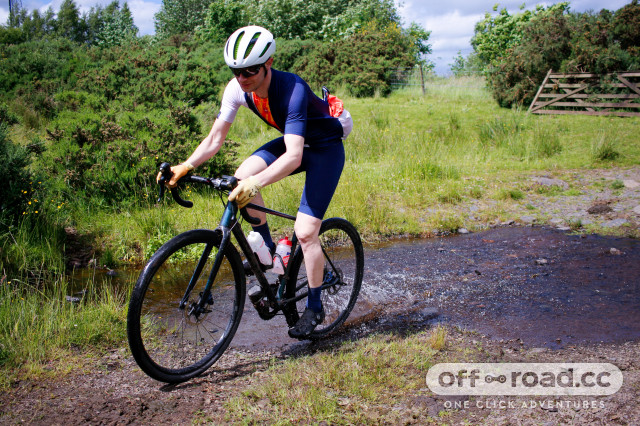 On the way back to George Square, the route cuts through Mugdock Country Park and descends to Milngavie, where you will join the cycle paths to get back to Glasgow.

5. The seven lochs and canal loop

The credit for this route goes to Smartertravelgla - and I am including it because this is a great introductory route to gravel, with very little elevation and plenty of train stations along the route for easy transport and bail-out options.

It takes in the canal paths that are too rough for road bikes, then enters the Drumpellier Country park and Seven Lochs Wetland Park, which offer refreshment options. Starting at finishing at Speirs Warf near the city centre this route makes a great, easy day out that you could do with a family as well.

Despite this being the flattest of the routes, any of the above routes are also easily tailored to your skills and fitness level. Ride them in multiple sections, or do it all in one go, that's up to you. But I hope you discover a lot of new, unseen and green places on the way!