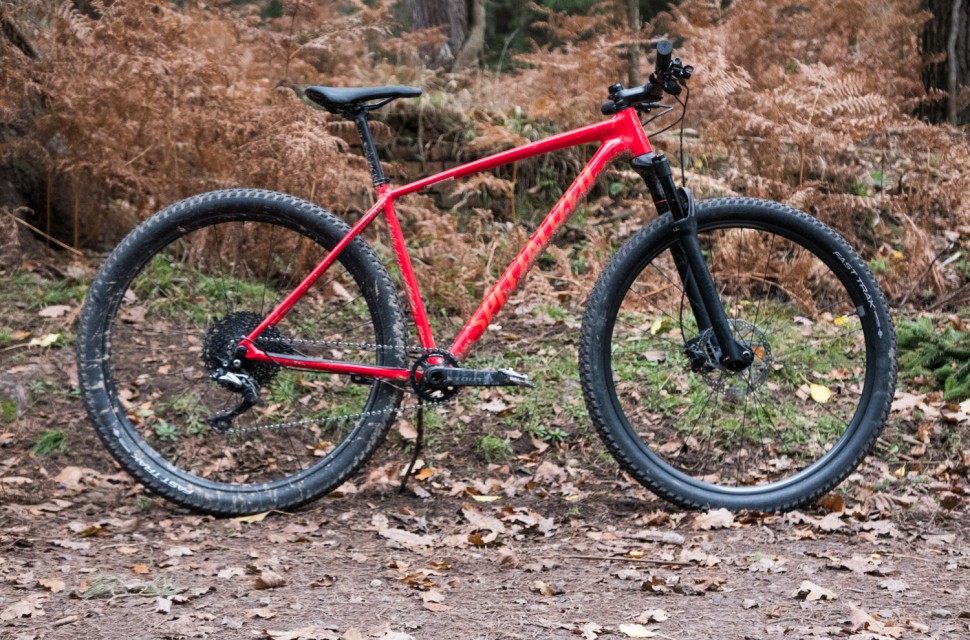 Specialized's Chisel Comp X1 is a cross-country racing machine that delivers a solid spec for the money. On paper, it might struggle to match direct-sales rivals, but it makes up for that with a truly impressive ride quality and sorted, if old-school handling for anyone that wants to cover ground, quickly.

The 29" wheeled Chisel range sits at the top end of Specialized's aluminium framed cross-country hardtail offerings, with the two bike lineup consisting of this bike and the £1,800 Chisel Expert. Both bikes share a very nicely made M5 frame with the so-smooth-it-looks-like-carbon D'Aluisio Smartweld technology stitching it all together.

The Chisel is an unashamed cross-country machine with rapid handling angles to match the head-down, flat-out intentions. If you're expected a slacked out trail bike, you'll be sorely disappointed, but if you want to elevate both yourself and your heart rate at maximum speed, then there's a lot going for it. It's got a Boost spaced through axle rear end, a proper threaded bottom bracket and a tapered steerer up front too, plus decent mud clearance from the skinny, unbraced seat stays. 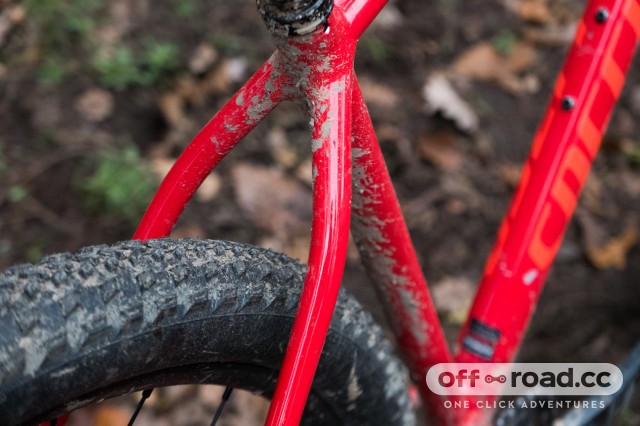 At just 11.6kg, it's impressively lightweight for the asking price, while the 25mm internal width own-brand Stout XC rims and fast-rolling 2.3", tubeless ready Fast Trak rubber means that there's very little lag between stamping on the pedals and getting going. All in all, the bike is impressively taut feeling; it's stiff without booting you up the arse too violently when sat down, it's not soggy under power and it's certainly not bendy even when you're hauling on the bars out of the saddle. 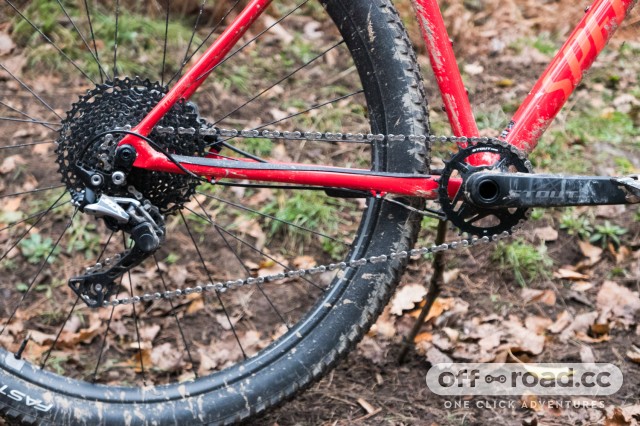 While cross-country is amongst the last preserve of multiple front chainrings on mountain bikes, Specialized have opted for a single 30T ring up front, which is mounted to a pair of their own brand Stout Pro cranks. In my opinion, that's a perfectly good thing as the Sunrace cassette has a decently wide 11-46T range and the Shimano SLX mech and shifter combo do a solid job of shifting over the 11 ratios. It's also nice to see that the crankset has an outboard bottom bracket, which makes for a stiffer, lighter and more durable setup. 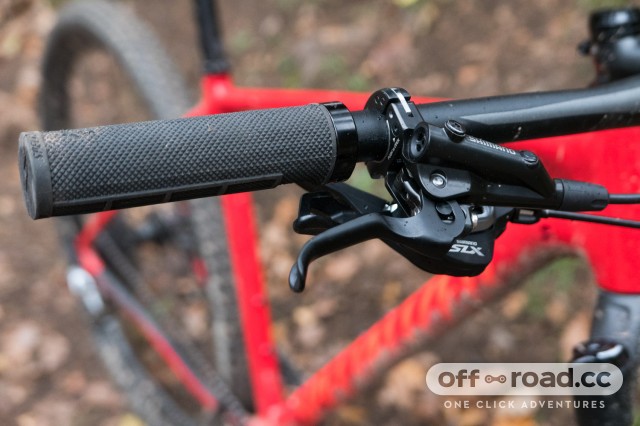 The Shimano MT501 brakes might be from the more affordable end of their braking lineup, but they share an awful lot in common with higher spec offerings, with a nice lever feel and decent power, though heavier or harder riders might want a larger rotor than the 160mm item fitted to either end for better stopping grunt. 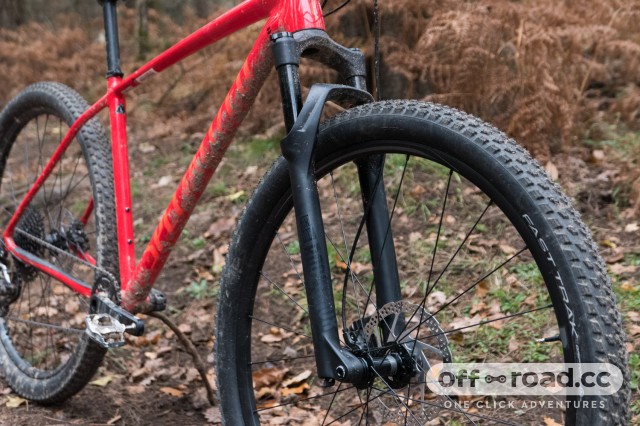 The through-axle equipped RockShox Judy Gold fork gets an easily tuneable air spring plus a crown mounted lockout, though with a decently well-sorted and controlled 100mm of travel (90mm on the small) I just set the fork up fairly stiff for racing and didn't touch it that often. There's a bit of twang from the long skinny legs under braking and when wrestling it in corners, but it's nothing too deleterious. 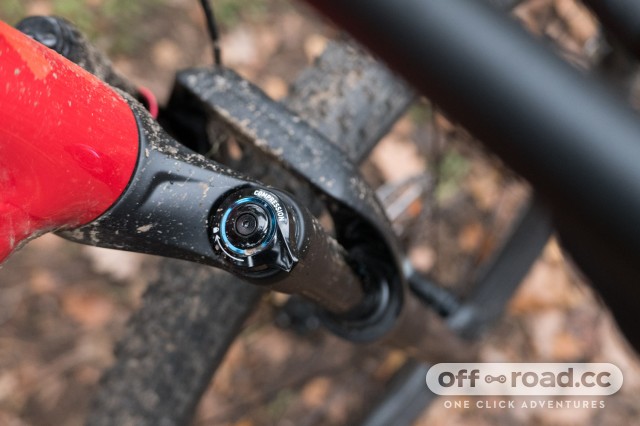 The hub ends actually have SRAM's seldom used, larger diameter Torque Cap interface that promises a more secure interface between it and the dropout, though is usually found just annoying people trying to fit their wheel when using a standard hub. 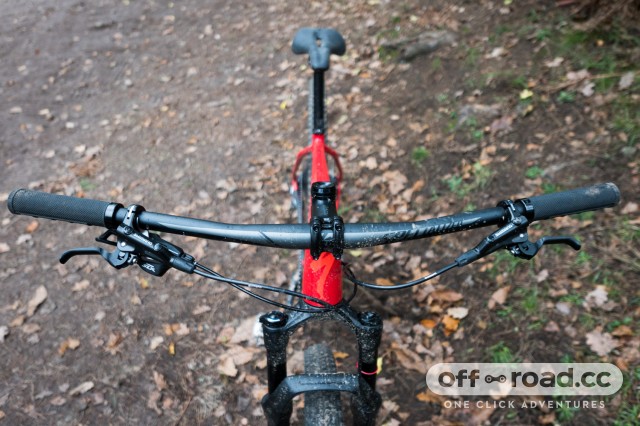 When it comes to the cockpit setup, it's still pretty old-school, with long-ish size specific stems (80mm on the large I tested) paired to a reasonably wide 750mm flat bar. Paired to a fairly short reach of 441mm, it works well enough for charging hard on the sort of maximum attack, up'n'down singletrack and fireroad that make up your average cross-country or marathon race track, though the fairly upright 74º seat tube angle helps. The skinny 27.2mm also post helps cushion the decently comfy Phenom Comp saddle. 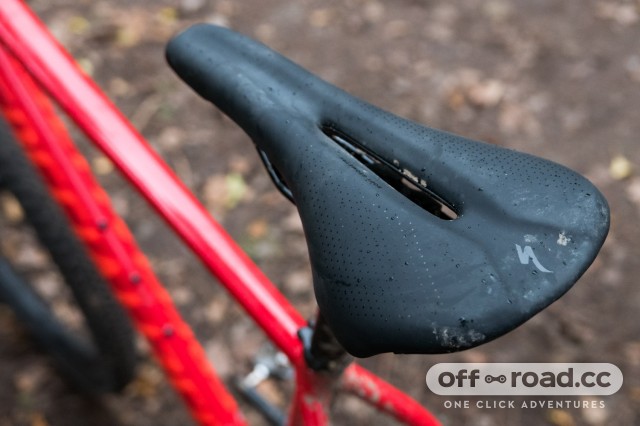 If you won't find yourself drawn to off-piste steep and tech - and neither should you, given the geometry, intent and tyres - then it's surgically sharp in its response to rider input and will merrily change tack at a moment's notice; think dog chasing squirrels. In fact, when it comes to putting the hurt on fellow racers, you'd have to be aiming pretty high up the rankings before you could fairly argue that the Chisel was holding you back, though if you're of decent fitness a larger chainring might be on your to-do list for flatter courses. 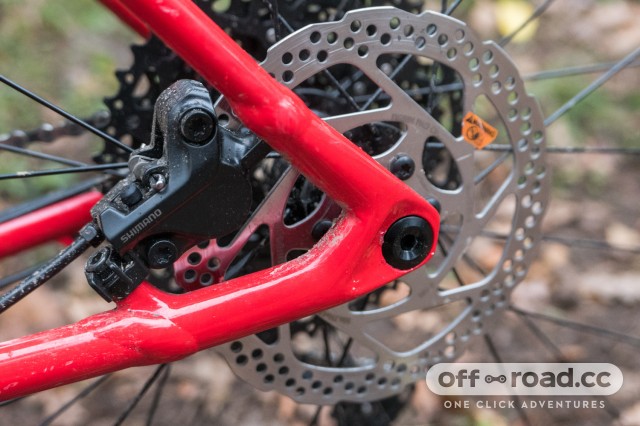 If you're after a rapid cross-country race bike but don't want to blow your budget before you even get to the start line, the Chisel Comp X1 delivers an outstandingly rapid, surprisingly comfortable and well mannered ride that's sharp enough to please the keenest of race heads, if not those with a more trail-riding focus.

While Specialized's bike shop sales model does mean it can't quite deliver the same kit-list value as direct sales rivals, their depth of knowledge shows with smart spec choices and high-quality own brand gear that does the trick when it needs to, so when it comes to going quickly, for as far as you can, the Chisel really delivers.