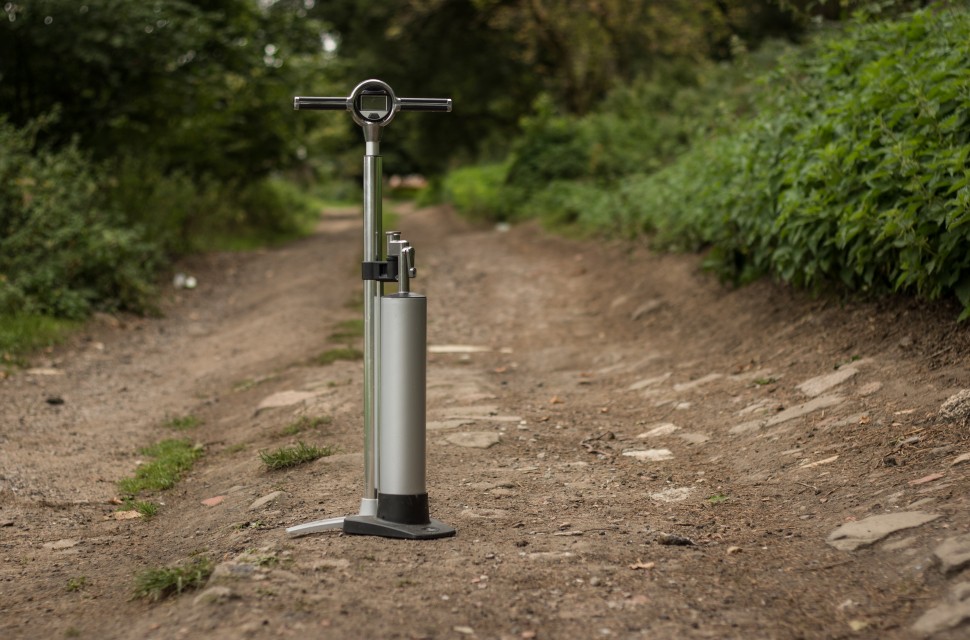 Rachael Wight
|
Sep 20 2018
|
Overall
Quality
Performance
Value
What's good?
What's not?
Buy if...
You want a digital gauge and a pressurised chamber for tubeless tyres in one package and have deep pockets

The Klic Digital Floor Pump and Burst Tank is Crankbrothers offering to the market of track pumps with a pressurised chamber for inflating tubeless tyres. It’s a nice looking pump but the Burst tank is a little long winded to use and it costs a lot more than rivals for no better performance other than the added digital gauge.

The pump we have here for test is the range-topping pump with a digital gauge, it’s good for 160 PSI and will cost you a pretty penny at £210. The pump itself made mostly from aluminium is a high volume one and using the digital gauge I can see that it pumps at 0.5PSI per full depression of the pump meaning it takes about 40 pumps and not that long to get from 0-20PSI. Pumping action is smooth and the large, smooth handle is easy to grip and depress. 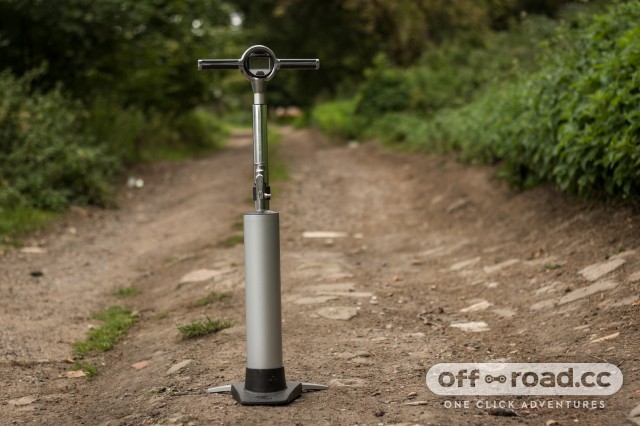 The name Klic refers to the pumps magnetic attachments and its modular nature, the pump body, the hose and gauge and the burst tank all separate from each other meaning the burst tank can be left at home in the workshop if you wish, at 3.4kg for the full set up, this might not be a bad idea! The gauge and hose are neatly hidden in the body of the pump with the hose secured with a magnet to prevent rattle. It’s a tidy storage system that looks pretty sleek too. The digital gauge which can be used with or without the Burst tank, is backlit, with large numbers so it’s easy to read too. 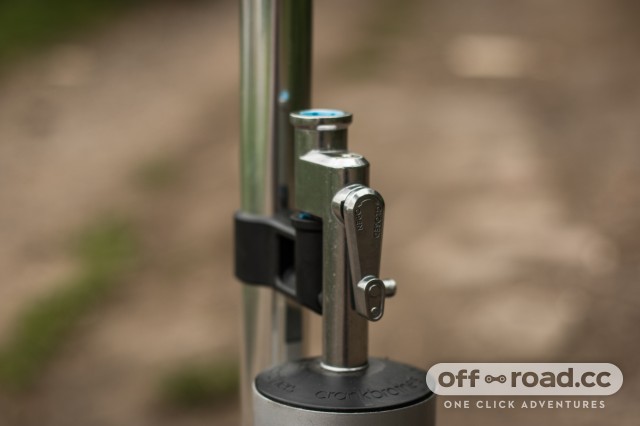 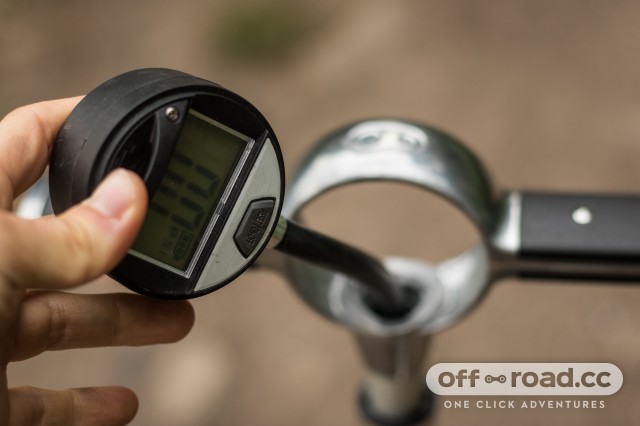 Seating a tubeless tyre with the Klic Pump and Burst Tank goes as follows; ensure the burst tank is securely in position attached to the pump and the lever is orientated up 90 degrees in the closes position ready to direct air into the chamber. You also need to make sure the floor you stand the pump on is even too, uneven ground may cause the burst tank to be dislodged from its interface as you pump therefore letting air escape. 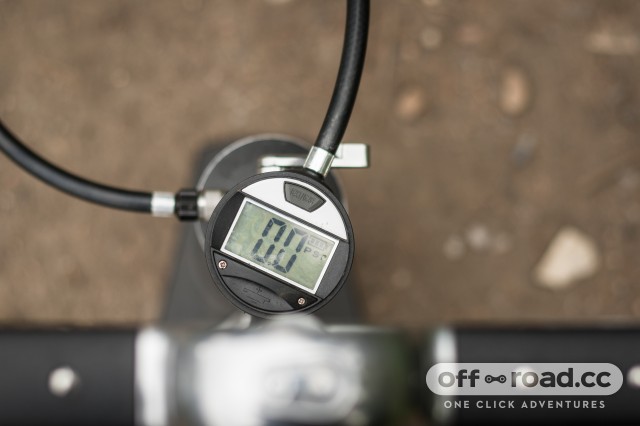 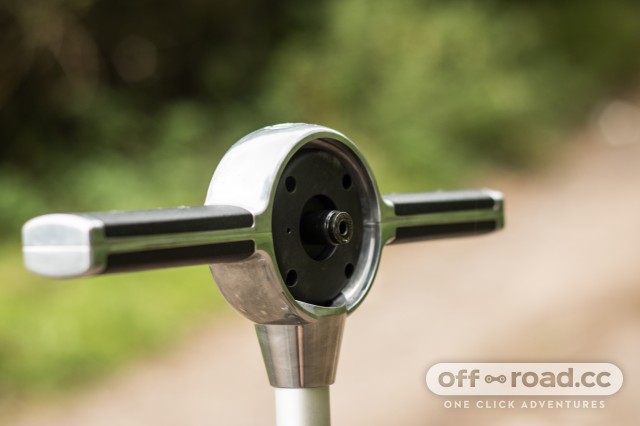 Next take the hose from the pump handle and plug into place at the top of the burst tank, the other end of the hose then needs to be  to the burst tank via the Schrader valve and by pressing the gauge into the recess just above the open/close switch, then making sure the switch is in the closed position, you are ready to pump away and fill the burst tank. Fully charging the chamber doesn’t take too long to get it to 160PSI. If you don’t have a tyre to full straight away then you can always remove the chamber and take it to wherever you might need it. A neat idea but practically not that useful as you need to take the hose too and probably the pump to top up the tyre once seated. 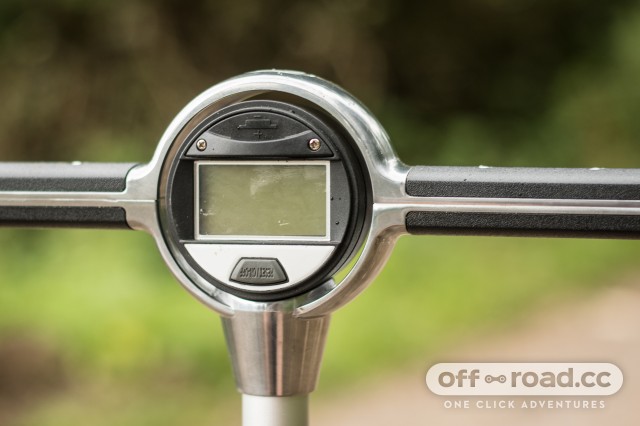 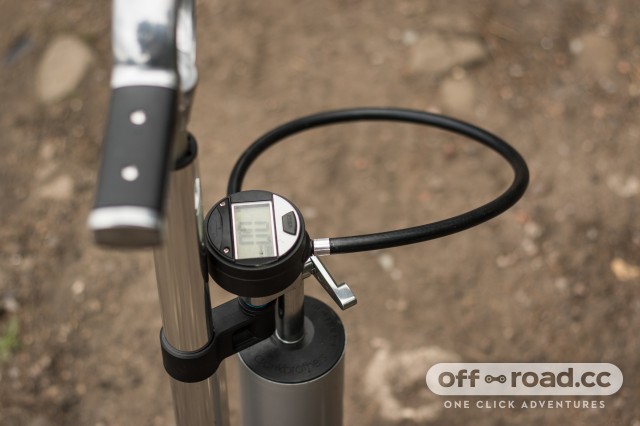 To then fill the tyre full of air means unscrewing the valve head from the chamber, switching the connector from Schrader to Presta and screwing onto your tyre and then flipping the open/close switch to release the air into you tubless tyre. The pump can then be used as a normal pump to top up the tyre. Using the pump without the burst tank is less of a screw/unscrew faff, just clip the gauge to the pump mounting, attach to tyre valve and go. The faff can be further reduced when filling the tank if you don’t use the digital gauge to give the tank pressure, just attach this at the end and connect to the tyre to fill. Although not using the digital guage to fill the tank does mean you can't see when it gets to 160PSI Crankbrothers have a handy guide on the side of the tank to instruct on how many stroke counts are associated with the PSI, so you'll just need to count. 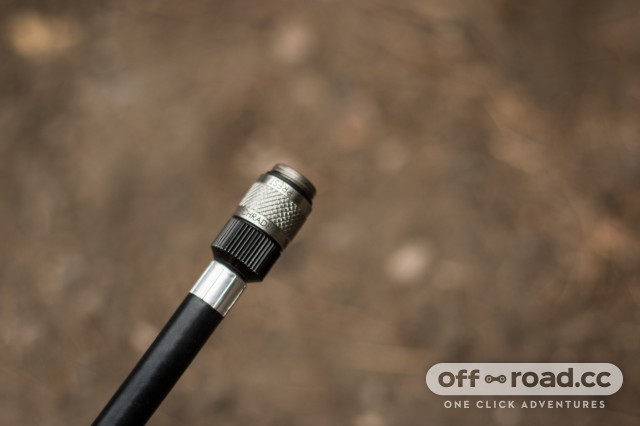 The pump looks and feels like great quality, with the Burst Tank attached the whole unit is a little heavy at 3.4kg but without it’s a svelte pump with an accurate digital gauge. The screw connector head will be personal preference, good in the fact that it won’t let air escape once connected but not so good in that when unscrewed it can back out your valve core too, Crankbro's seem to have kept the thread of the connect quite short to help avoid this problem and save time in screwing into position. I’d like to see the hose a little longer (we had a similar complaint with the cheaper Gem Floor Pump) but in this case, there probably isn’t enough room in the pump shaft to accommodate this. 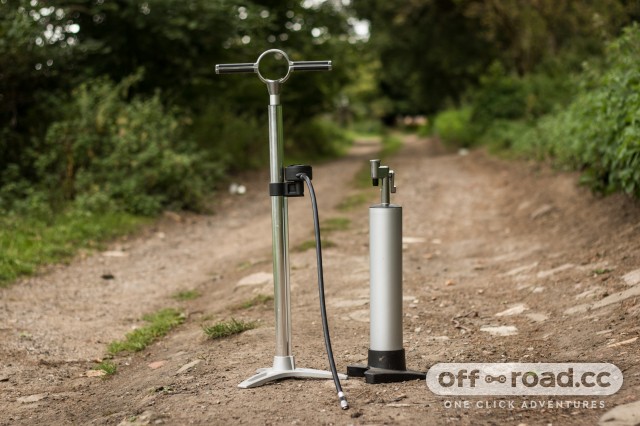 I’d also, if I’m being fussy, like a way to secure the pump handle down when not in use so the handle can be used for lifting the pump, as it is picking the pump up with the handle only serves to extend the handle, Crankbrothers say no-one else has had this complaint.  My last gripe is that there is no way to release air from the tyre should you measure the pressure and there be too much. A simple air bleed button as seen on handheld pressure gauges would rectify the problem here, on speaking to the guys at the brand there doesn't seem to be anything in the pipeline to add this feature. 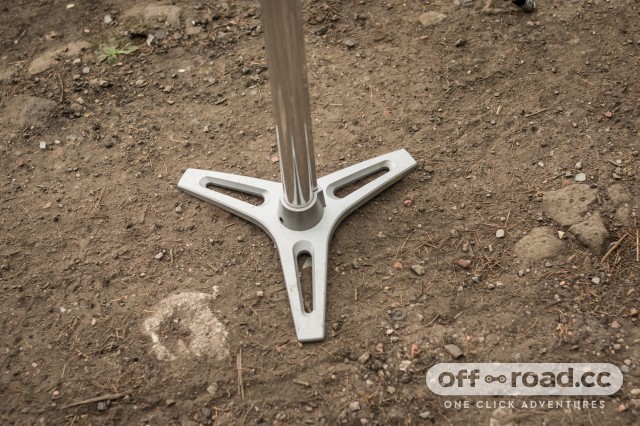 The Burst Tank has seated every tyre I’ve thrown its way with minimal fuss, doing exactly what it says on the tin. The large volume of the pump also allows many tubeless tyres and rim combination to be seated without the Burst Tank, inflating quickly and easily. At this price point (£210) the Crankbros pump is expensive but it has a few flaws namely the weight, lack of bleed port, chamber filling faff with the screw connector and the perhaps needless opportunity to remove chamber that make it hard to recommend over other similar products (Topeak’s Joe Blow Booster, Bontrager’s TLR Flash Pump and the small Airshot) that do the same job for half the price. 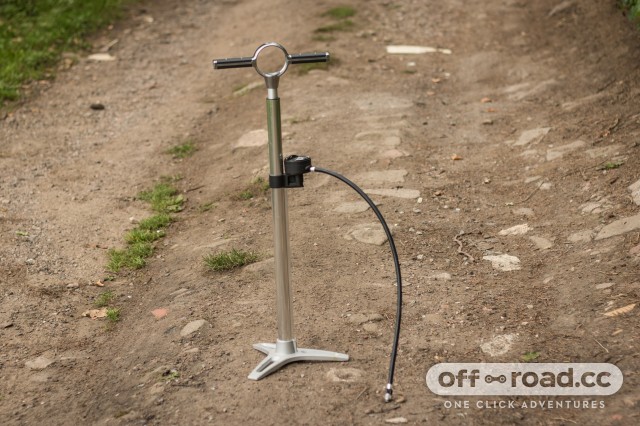 There is an analogue version of the pump but that only saves £30 on the list price. If I were in the market for a track pump, however, I'd be tempted by the digital Klic Pump without burst tank although it still is pricey at £117 and could still do with an air bleed button. 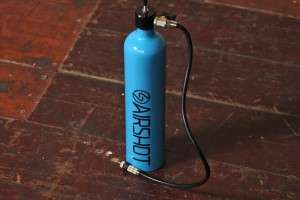 Peaty's Holeshot CO2 Inflator Kit review £30.00
One of the best (and prettiest) CO2 inflators on the market
Feature