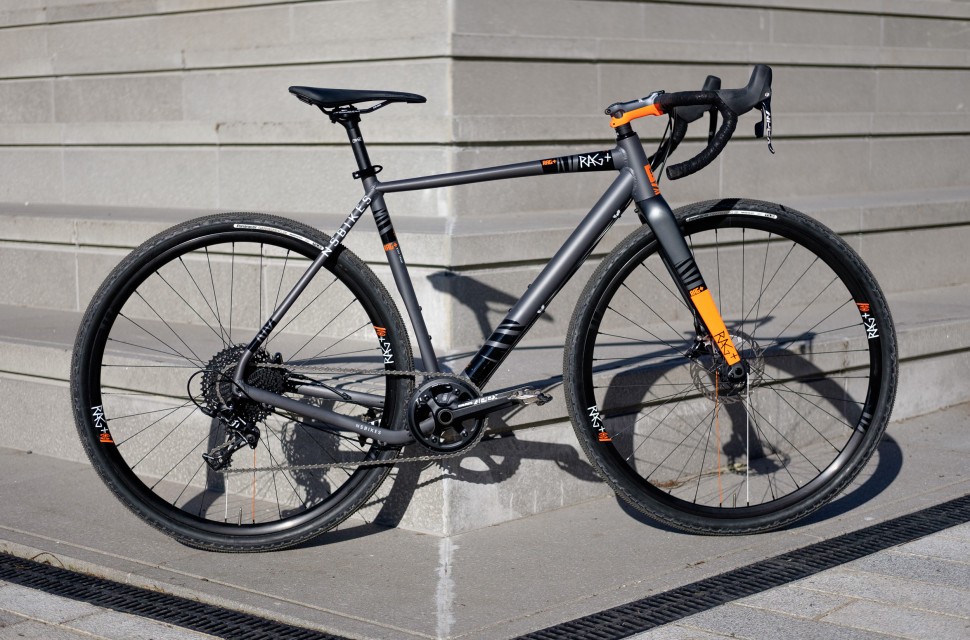 Benedict Pfender
|
May 21 2018
|
Overall
Quality
Performance
Value
What's good?
What's not?
Buy if...
You're looking for a bike to go out and have fun on, and don't plan to encounter any mud

With a background in dirt jump and mountain bikes, the RAG+ is NS Bikes' foray into the drop-bar bike world. The updated version has a few notable changes over the last model with improved tyre clearances, added mudguard mounts on the full carbon fork and flat mount brakes. There is just one spec available priced at £1600.

This bike looks good in the flesh with a sleek profile and nicely shaped aluminium tubes. The RAG+ just has a “go out, ride and have fun” type of feeling, which is exactly what this bike excels at. Whatever you turn it to, whether it be a long ride out, a quick jaunt in the woods, along the cycle path or down your local trails, this is a bike that invites you to hop on and have a go. It provides a comfortable, consistent and coherent ride that always leaves you in control.

I do feel the feel the paint job could have been toned down a little bit. Whilst the base coat of paint is a lovely shade of grey, to my taste the graphics don't feel amazingly high quality. There are some lovely details, like the orange fork leg, but you'll have to decide if the overall look of the bike is for you. 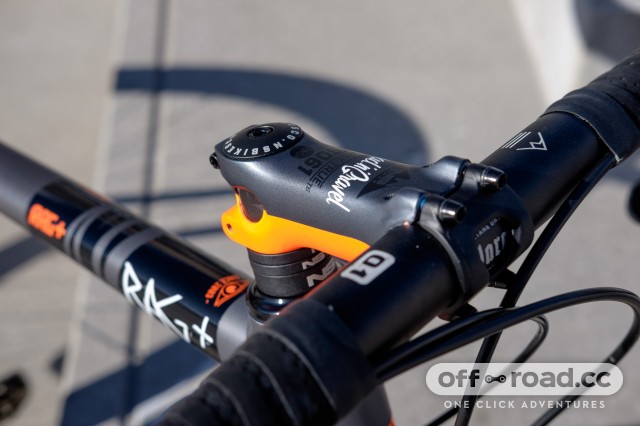 Aside from that, the bike is cleanly put together with well-matched components and sleek lines. Cables are routed externally (aside from the fork) along the bottom of the downtube and kept out of the way.

Riding in some seriously gritty conditions I have had some paint rub off the bottom of the headtube. It seems that the first mount point is too close to the headtube and doesn’t allow the cable to clear the headtube properly.

There’s some significant shaping of the tubes going on, with the flattened top tube by the seat post making it comfortable to shoulder and the dropped drive-side chainstay and crimped seat tube increasing tyre clearances. 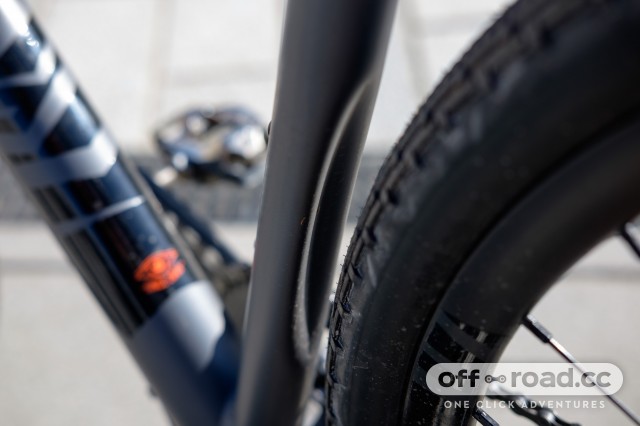 You may end up having to chop your seatpost, as the crimp prevents the seatpost going all the way into the frame.

The other thing to note is that in the smallest cassette sprocket, the clearance between the chain and bottom of the chainstay is relatively small. That’s not a problem with the drivetrain how it stands, but if you ever want to change the ratios you may run into some problems with a smaller chainring. 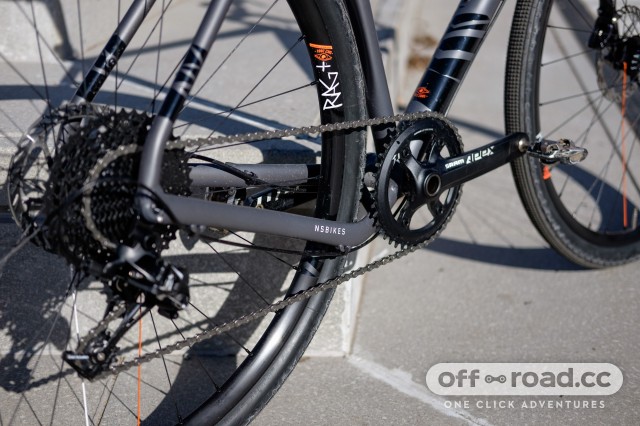 For the large majority of riding the easiest 1:1 ratio is fine. However couple that with the large diameter 43c Panaracer Gravel King SK tyres and some of the somewhat steep 25%-plus off-road inclines I have ridden, and it can feel a little bit hard to push on the steepest of slopes.

SRAM Apex1 is reliable, though doesn’t have quite the same level of refinement as higher end groupsets. My main gripe is that I’ve had some sporadic issues shifting from the large 42T sprocket to the 36T below. This is the largest jump on the cassette and at times has shifted a little stubbornly. 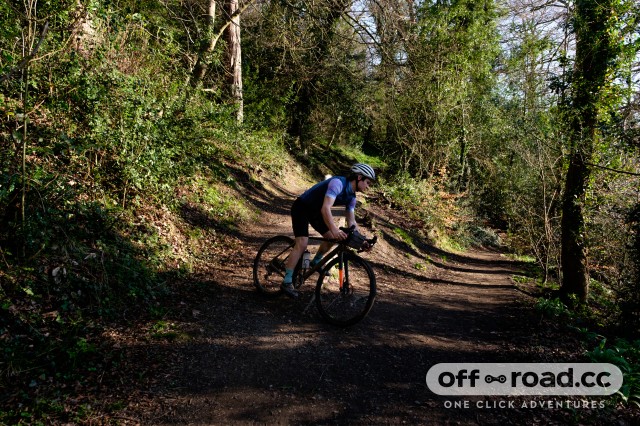 I’m not sure if this could be to do with the non-series Sunrace cassette, as shifting is flawless on the rest of the block. No amount of tinkering with the B-tension has managed to alleviate the slightly "sticky" feeling shifting out of the biggest sprocket.

That issue becomes especially exacerbated in mud. Any drivetrain is going to suffer in those conditions but to me it seems that the mud clearing abilities of the Sunrace cassette aren’t quite as good as the series SRAM cassettes.

The RAG+ definitely has an off-road bent. The 6061 T6 aluminium frame is built for wide tyres, with clearances for 700x45c or 650bx2.2” tyres and thru-axles front and rear. NS has decided to stick with a 15mm mountain bike front axle (matching their in-house hubs) rather than the 12mm that seems to be becoming the standard on road bikes.

One annoying detail that I have noticed is that the derailleur hanger has a tendency to rotate when the rear axle is removed, making it a pain to relocate the axle when reinstalling the back wheel.

The wheels provide a solid and trouble free, if not amazingly inspiring ride.  They are built up on NS’ own Rotary hubs that are intended for mountain biking use - that means they’re plenty strong for the kind of riding you’ll be doing on this bike.

The hubs are laced with 32 double butted spokes to Alex Draw 2.1P rim which at a quoted 470g aren’t excessively heavy and have a decent 21mm internal width for the wide 43c Panaracer Gravel King SK tyres. 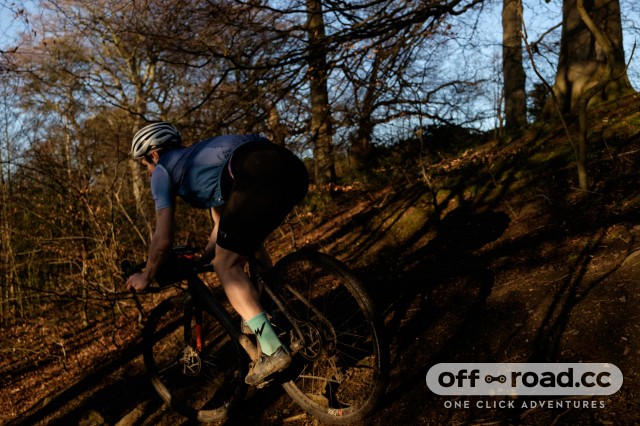 However, in use, the wheel and tyre combo just felt a little sluggish when accelerating. Having a high volume (and heavier) tyre certainly doesn't help a bike accelerate quickly, but the connection between pedal stroke and moving forwards didn't feel "instantaneous".

Likewise, while the wheels will happily carve their way round long and fast corners, when it comes to quick direction changes and picking your way through obstacles, they don't feel quite as accurate or direct.

All that to say that the wheels can feel a little vague in some conditions. That's not generally a problem when moving along at a steady pace, but for quick speed and direction changes it becomes a lot more noticeable.

I could forgive that, but there is already visible lateral and radial runout on both wheels and I haven't ridden anything that should feasibly knock them out of true. That leads me to question the overall build quality of the wheelset and at the £1600 retail price I find that quite disappointing.

Despite very good reviews from others, I didn't get along with the 43c GravelKing SK tyres that well. They provide a nice supple ride and perform really well in the dry but quickly give up when things get wet.

The knob spacing is so tight that the tread quickly clogs up and I found myself thinking that I may as well have slicks fitted. I just didn’t find the tyres that versatile - they are very good for their intended purpose of dry, fast, pure gravel but quickly feel out of their depth when things get sloppy. 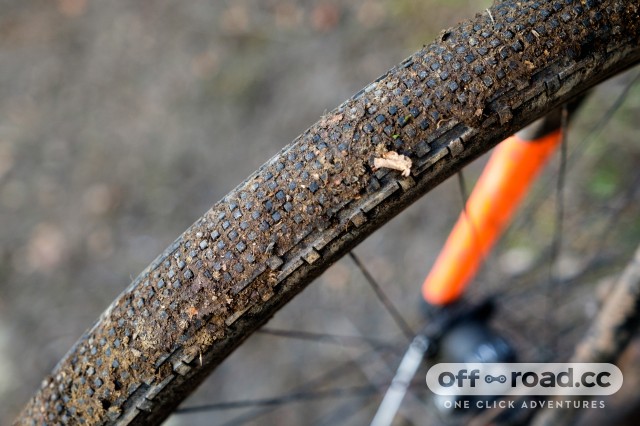 The issue with that is for dry conditions I’m inclined to say that a high volume slick tyre, such as a Compass Snoqualmie Pass, which we’ve currently got in for testing, is almost as good, with the added advantage of being quick rolling on the roads as well.

And if you’re headed out onto something gnarlier I’d prefer something with a more pronounced tread which is capable of tackling a variety of conditions.

The tyres are good in the dry but its particularly the continuous "line" of side tread that is easily overwhelmed when cornering in the wet. In my opinion, there are more versatile tyres available. One of my favourites, the WTB Riddler has a slightly more open tread and in my experience is just that little bit more versatile.

All that said, these tyres are excellent for their intended purpose with a comfortable ride and good puncture resistance. I ran them with tubes during my time testing the bike, but the rims and tyres are tubeless compatible - to upgrade you’ll just need to get some valves and tubeless tape. 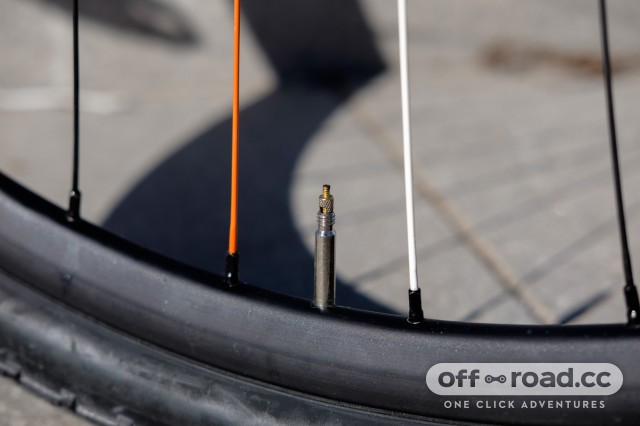 Speaking of tubes, I’d prefer to see some specced with “normal” valves. The smooth valves featured here were a pain to inflate. I had to hold the chuck of my pump on with one hand as it wouldn’t stay in place, having no external threads to grip on to.

The finishing kit is solid stuff. The 440mm wide bars provide a good amount of control off-road, though have a relatively harsh ride which can be fatiguing on long, bumpy descents.

The 16-degree flare also helps significantly riding technical terrain in the drops, and the grippy bar tape helped the feeling of security. One more pernickety detail - I lost both bar plugs almost immediately, it would be nice to have some which fit more securely.

The saddle was deceptively more comfortable than it initially appeared. I eyed it up sceptically at first, but I’ve had some long days in the saddle with no issues.

Complaints aside, the RAG+ is a great package that rides very well. It’s comfortable, no doubt helped by the high volume tyres, rides well and provides a confidence inspiring ride. 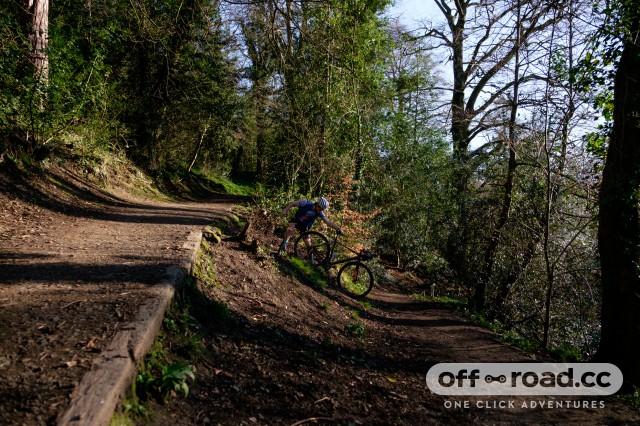 The central position lets you adjust your centre of gravity easily to keep traction, particularly when climbing more treacherous, muddy inclines. It feels inherently well balanced, which encourages quite a playful riding style that lets you throw the bike around to get it positioned how you need it.

The riding position is a bit more aggressive with a lower stack (559mm stack, 373mm reach for Size M) than other bikes I have ridden recently. That really plants the front end on high-speed gravel descents, making it very good at changing direction and choosing your line accurately.

In hindsight, I’ve found myself a little concerned just how fast I’ve been going on some descents with the bike maintaining its composure whatever it faces. The bike handles well at speed, remaining stable even when sidewinds conspire to try and push you into the ditch at the side of the track. 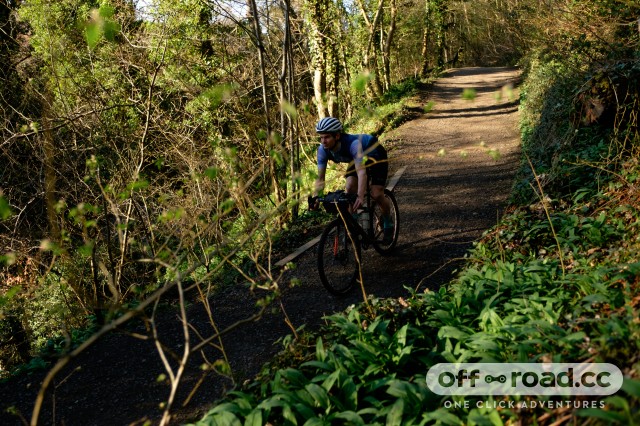 That lower stack does make the bike feel relatively compact and at 176cm tall, I feel like I am just on the threshold where I could also consider sizing up to a large frame.

The quick, accurate and precise handling means the RAG+ also feels quite at home on the roads, something that other gravel bikes don’t always do so well. Fit some slicks and it's perfectly serviceable for road rides too.

That’s not to say the bike can’t take some abuse, but I have found the more aggressive position can lead to feeling less secure on more technical and steep terrain. With a 71.5-degree head angle and comparatively short wheelbase the RAG+ just feels a little less composed there. 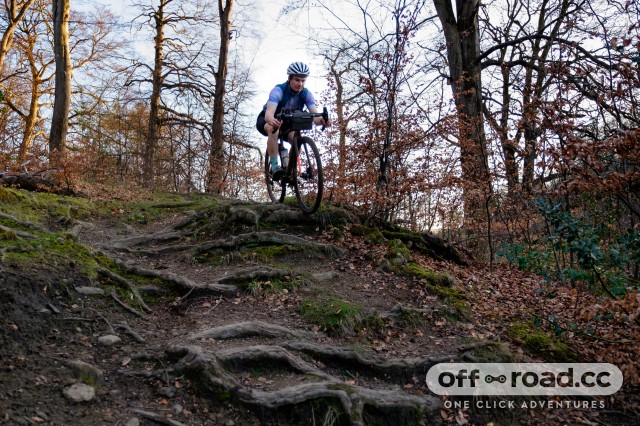 The RAG+ is most at home blasting along non-technical, fast, winding trails and gravel roads. That's where you can really push it, confident that the bike will do its thing without any protest.

That RAG+ feels comfortable wherever you take it without taking itself too seriously. Whether you’re railing it around corners on tarmac, drifting on gravel or sliding on mud the RAG+ doesn’t surprise you with unpredictable handling or bad manners.

As a package, the RAG+ is a great proposition with solid components and spec, but I can’t help but feel a bit reserved about the wheelset, especially given the £1600 price tag of the bike. 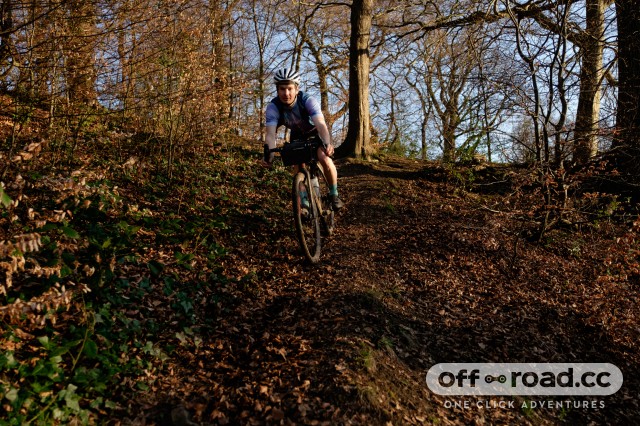 Of course feel is a subjective thing, but in my opinion, the wheels contribute to sloppy handling on a bike that otherwise handles so well. Likewise, the tyres are not my first choice, though if you will be staying away from mud they will serve you perfectly well.

All that said, it’s hard to stay annoyed at those faults, because this really is just a bike to go out and have a blast on, that will put a smile on your face during those summer evening loops.