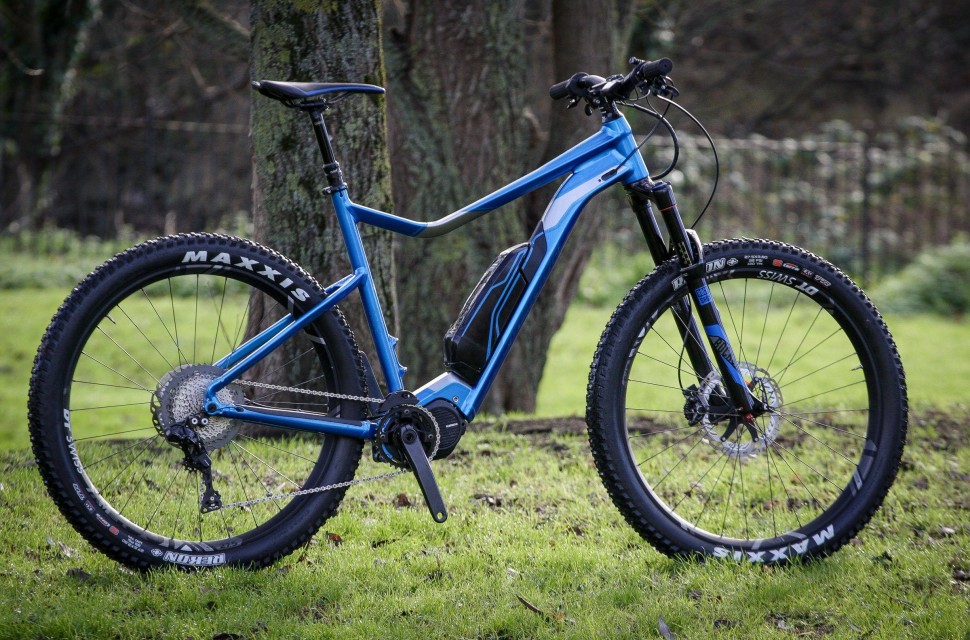 FourEyes
|
May 15 2017
|
Overall
Quality
Performance
Value
What's good?
What's not?
Buy if...
You're into the hardtail experience and you and an agile hardtail with added power

It's not often that a bike comes in that's got all the new things. But we've got our hands on the new Merida e.Big Trail 900e (catchy name), which has. It's got a Shimano STEPS MTB motor. It's got Shimano's electronic XT Di2 gears. It's got plus-sized tyres. It's got the lot! And it puts in a good show, too: it's a user-friendly and capable trail hardtail that's happy both on fire roads and technical terrain. £4,700 is a lot of money for a hardtail, which will limit its appeal against some very capable big-travel bikes in the same price bracket, but it's still a good performer. 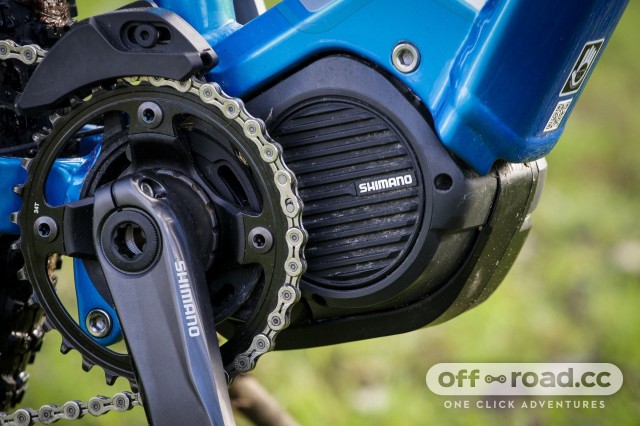 Let's do the motor first. That low-standover alloy frame is sporting the newest of the mountain bike motor systems, Shimano STEPS E8000. It's Shimano's answer to the currently-dominant Bosch Performance Line CX motor and it puts out a similar amount of torque, 70Nm to the CX's 75Nm. Like the Bosch System it's powered by a frame-mounted 500Wh battery.

The display and controller are a bit different though. The small OLED display sits behind the bars on the right, giving speed, battery and mode information that's pretty easy to read. The information changes colour depending on what mode you're in which makes at-a-glance checking pretty simple once you've remembered what means what.

Changing mode is via a shifter that's much more like a mechanical trigger shifter, like you'd use to change gear, than it is a button like the other predominant systems. It's a very clever design and one of the things we liked best about the system when we rode it for the first time.

The electronic Shimano XT Di2 shifters use the same shifter, on the other side of the bars, and because the two systems use the same E-Tube wiring and communication protocol they can talk to one another, meaning that you get a gear indicator on the display. In theory all sorts of auto-shifting cleverness is possible, but that's a way down the line just yet.

The electronic rear mech is internally routed and pulls the chain over a wide-range 11-46T cassette, giving a broad range of gears from the single chainring. You get Shimano XT hydraulic brakes too, with finned Ice Tech rotors for maximum stopping power.

The e.Big Trail is a 27.5+ bike, using the wider Boost axle standard and sporting 40mm DT Swiss rims and Maxxis Rekon+ 2.8” tyres. Tyres and rims are tubeless-compatible so you can run them squidgy without fearing the pinch flats. At the front there's a Rock Shox PIKE RCT3 fork to take the sting out of the trail, and there's a Rock Shox Reverb remote dropper 'post too for when the going gets steep. The frame design, though compact, has plenty of room for a single bottle cage.

Dave says: This is the third bike we've tried the Shimano E8000 STEPS system on, and it's the first we've been able to ride on familiar trails, so it's easier to make some back-to-back comparisons with the market-leading system from Bosch, the Performance Line CX.

The STEPS motor doesn't feel quite as outright powerful as the Bosch CX unit, but it does have a more finessed feel, especially when you're working through technical terrain. STEPS seems to be more sensitive to torque and less to cadence, so shifting up the sprocket to an easier gear doesn't boost you like it can with the Bosch motor. But when you're feeling your way up a climb and there's more power than there is grip, the Shimano motor is easier to keep going.

The Merida's ride feel helps there too. It's quite an agile bike, helped by it's reasonably low weight, and the short 434mm chainstays and comfortable-but-not-too-slack head angle combine to make it fun to climb on as well has having enough composure for technical descents. Our XL bike has a 1201mm wheelbase which is fairly short for a bike of its size, and it was noticeable that it was happy to be flicked through turns without feeling lazy. It's not a particularly aggressive geometry, with a reasonably high front end, so it's comfortable on the boring bits without feeling too compromised when things get fun.

Up front the Rock Shox Pike RCT3 fork put in a solid performance with the whole front end feeling very solid. The big Maxxis tyre takes a bit of sting out of the rear but you're still very much on a hardtail here, so you need to be a bit more careful about what you slam into; the Merida responds well to line changes, although the extra weight of the motor system means it's not as agile as a non-powered bike. It's certainly not bad, though, and the Shimano STEPS system is both lighter and more compact than Bosch.

One thing that Shimano have really nailed with STEPS MTB is the controls and display. They're the best out there by a mile. The electronic/mechanical shifter is a joy to use, with a positive action that always works and is impossible to shift by accident. It works really well with the Di2 gearing too, with crisp and accurate shifts across the cassette every time. The display is great too: tucked away behind the bars it's unlikely to get damaged in a crash, and the colour display means you can tell what mode you're in without even really looking. The power graph is neat too, showing you how much the motor is helping.

STEPS has three modes. Eco is a gentle assistance that'll eke out the battery life on long rides; we were getting a similar range out of the the Merida as we have on 500Wh Bosch bikes. It's maybe not quite as good on range but it's marginal. Trail mode gives you access to the full power of the motor, but it won't unload it unless you're really working, while Boost ups the assistance considerably. I still feel like the mapping of the modes on the STEPS MTB system is a little gappy: Boost makes things very easy and in trail you're expected to work a bit. The Bosch motors have four modes and I think that works better, but it's a minor annoyance.

So the Merida is a well-behaved, well-specced bike that's fun to ride on the trail. The best part of five grand is an awful lot to drop on a hardtail, though, especially when there are a wealth of high-performance full-suspension bikes out there for this kind of money. If it was my money I'd spend the extra over the £3,300 e.Big Trail 500 build (same motor, Deore gears, Fox 34 fork) on some rear suspension. In my view there's very little down side to having suspension on an e-MTB, as the extra weight matters very little and you rarely need to climb out of the saddle: you might as well have all the travel you can afford. That being said, the cheaper 500 build looks like good value on paper and we know that this is a capable trail frameset with an excellent motor. If you're definitely after Di2 and you fancy the hardtail experience, you won't go wrong here though: the e.Big Trail 900e can cope with technical riding with ease and the STEPS motor and electronic gears work really well as a system.

Well made with tidy if chunky welding

Not especially slack, felt composed on most stuff

Yes, if they were loaded and it met their needs

It's a good high-spec electric hardtail, you're paying a lot for Di2 and the STEPS motor though when there's plenty of big-suspension Bosch bikes out there for similar money
Bikes

Dave is the editor of eBikeTips and one of the founders of road cycling sister site road.cc. He's all for a helping hand to get to the fun bits, but not so unfit that he couldn't manage it on his own