Skip to main content
Log In Register
Genesis Tarn 20 £1,800.00
A versatile Plus tyred trail bike that'll turn it's hand to anything you fancy 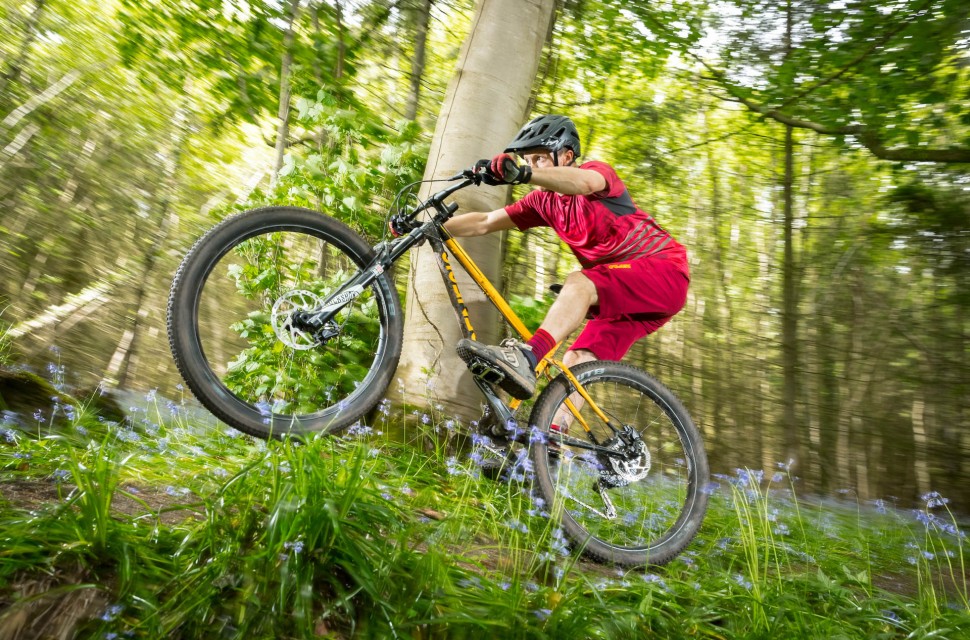 The Genesis Tarn is a refreshingly different take on the UK trail hardtail, with a combination of chubby 2.8” Plus rubber, a zingy steel frame and more stretched out geometry for 2017. If you’re willing to take a punt on something a little out of the ordinary, it’s a highly competent and entertaining ride, but do budget for some more aggressive tyres for soft conditions.

At the heart of the Tarn is a frame made from seamless double butted cromoly steel. Genesis call the blend ‘Mjölnir’ which fans of Viking legend will know was the name of Thor’s hammer, though the frame definitely isn’t a relic from times past, using a through axle rear hub with Boost 148 spacing for extra clearance and a stiffer wheel. The geometry is refreshingly modern too, with a reach of 440mm for a medium sized frame. There’s 120mm of travel from a RockShox Yari RL fork up front, but that’s complimented by chubby WTB Ranger 2.8” Plus tyres on 40mm internal width FatLab rims. 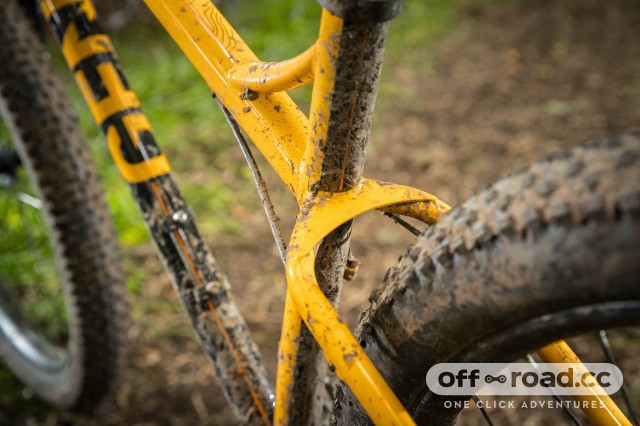 That means that the Tarn has got a bit of a monster truck feeling once you wind it up to speed on singletrack. It’s hard to tell whether it’s down to the frame material or just the tyre volume, but it’s a surprisingly comfortable ride despite the hardcore intentions. In common with most Plus tyres machines, it also rolls impressively quickly, cutting out much of the trail buzz you’d expect to be transmitted back to your hands and feet. 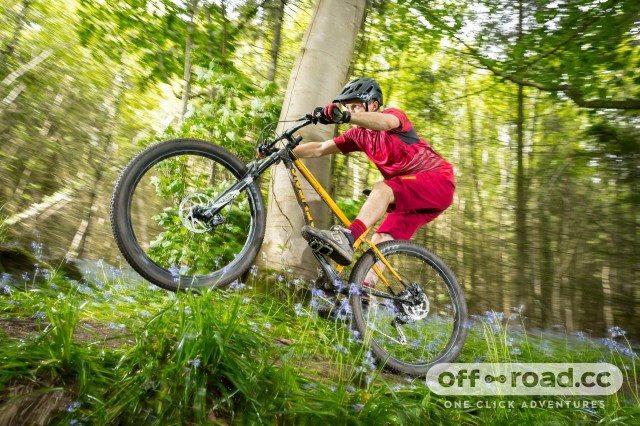 That extra squidge also helps to hide the fairly basic damping of the Yari fork. In fact, the only drawback to this setup is that the fitted Ranger tyres have an extremely low profile tread which is fine on hardpacked or dry trails but is utterly useless in sloppy mud. Obviously, a switch to more aggressive rubber will fix that and I’d suggest looking at a Maxxis Minion DHF 2.8” up front paired with a similarly sized Rekon+ at the back. It’s also worth noting that you can run conventionally tyred 29” wheels in the Tarn if you so wish. It's also possible to run the FatLab rims without tubes and I'd suggest you do that as soon as possible to drop a serious bit of rotating weight from the bike.

The frame also has loads of standover clearance, so it’s perfectly easy to size up should you prefer a longer frame, but there’s  plenty of space on the Tarn as standard. That means the bike is nice and stable on descents as well as not feeling cramped on the climbs. For my preference, I think a seat angle steeper than the relatively relaxed 72º of the Tarn would help you stay seated longer on steep climbs however. 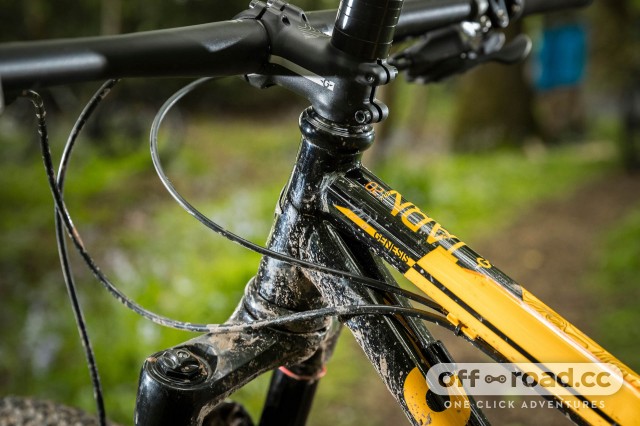 At 68º, the head angle is pretty much in the ballpark for a bike like this, though the Tarn is so entertaining on technical descents I’d like to see it a bit more relaxed and paired with a stem shorter than the own-brand 60mm item fitted. There are no such grumbles about the handlebar however. At 760mm wide with a minimal 5mm rise, there’s plenty of leverage and as the fork steerer is cut fairly long there’s plenty of scope to adjust bar height to suit. I left it slammed as low as possible to help weight the front wheel and thanks to the dinky tapered head tube that's perfectly possible.

Those grumbles aside, it's entertaining as it thunders over and along trail obstacles with just the occasional growl of fat rubber slipping traction or zesty ping of a rock striking the frame. At 13.9kg the bike doesn't demolish climbs with the vigour of a freshly doped racer but it's not so leaden that it becomes hard work on more drawn-out slogs.

One of the Tarn's strengths is that it'll gladly turn it's hand to pretty much any form of riding, though I found myself forgoing long distance rides and mostly concentrating on messing about on winding singletrack and short, sharp steeps in the local woods. It excels at that sort of mixed trail riding, with a nice balance between a lively feel for darting between trees and hopping and popping over logs and rocks without getting too far out of its depth when you fancy plummeting down something. The rigid chassis of the Yari fork helps here, while the FatLab wheels can certainly take a beating. In common with all Plus bikes, setting tyre pressure accurately makes all the difference between a bouncy, traction free ride and lazy and inaccurate handling, so I'd suggest you buy a digital pressure gauge and experiment until you find the 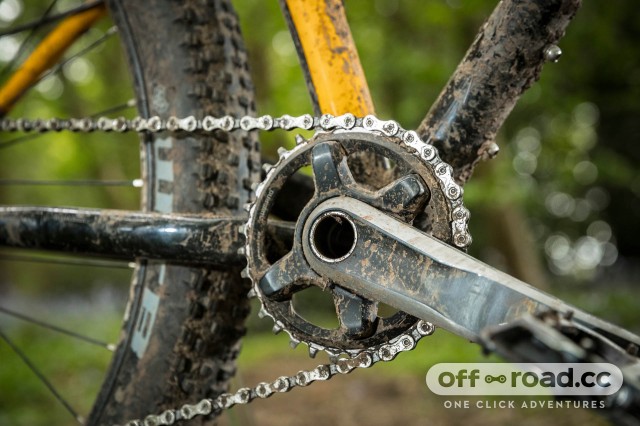 As Genesis is the house brand of UK Shimano distributor Madison, it’s no surprise to see a full Shimano SLX drivetrain setup. That’s no bad thing as the single front chainring equipped 11spd SLX group is smooth, durable and hardwearing. Okay, the 11-42T cassette is slightly down on overall range compared to SRAM’s rival single ring offerings, but that wasn’t very noticeable in use. The non-series M506 disc brakes provide more than respectable stopping power thanks to a 180mm rotor up front and 160mm at the rear, while the lever apes the shape and feel of the more expensive items in the Shimano range. The only drawback is that you’re limited to using faster wearing resin pads rather than longer lasting and less fade prone sintered items and the lever doesn’t get the clever Servo Wave gubbins that increases power as you pull. 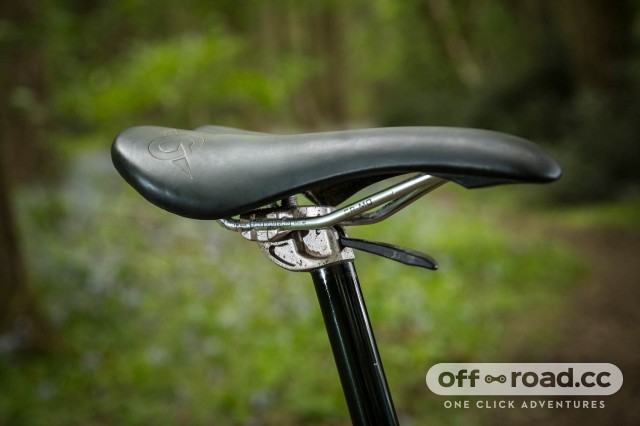 The inclusion of a KS DropZone dropper post is excellent news, however. Okay, it requires you to take a hand off the bar to operate the under-saddle lever in a move that looks rather like a Michael Jackson-esque crotch grab and with only 125mm of drop it’s not as convenient as a longer travel, remote equipped item but it’s certainly a huge improvement over faffing with a fixed post. I’ve not had any reliability issues with it during my test period, but there have been some historical issues with soggy and leaky versions. Hopefully, those are behind KS, but it’d be easy enough to upgrade in future.

Genesis says: "Tarn is our dedicated 27.5+ offering, designed from the ground up around the new Boost axle standards, wider chainline and new-school progressive geometry. A beautifully crafted steel frame and an enviable part spec with the new Shimano SLX 1x11 drivetrain, Rockshox Yari RL Solo Airfork, FATlab 40mm rims, KS dropper seatpost and tubeless-ready WTB Ranger 2.8" rubber will happily handle anything and everything the UK's trails can throw at you."

Thanks to the big rubber and steel frame, it's nowhere near as harsh as many hardcore hardtails can be - quite the opposite in fact.,

Fairly lively, which is probably down to the 60mm stem being a bit overlong.

Yes, it was a fun machine for hacking about the woods, though a change of rubber would be needed for year round use

If they took the seat angle a bit steeper and the head angle slacker, I'd be all over it.

Yes, if they were after a different take on a trail hardtail and wanted to do a mix of riding.

Looks like this bike is crying out for Fat rubber. Dirt Wizards should do the trick and looking at the clearance in the rear you could run em side by side.