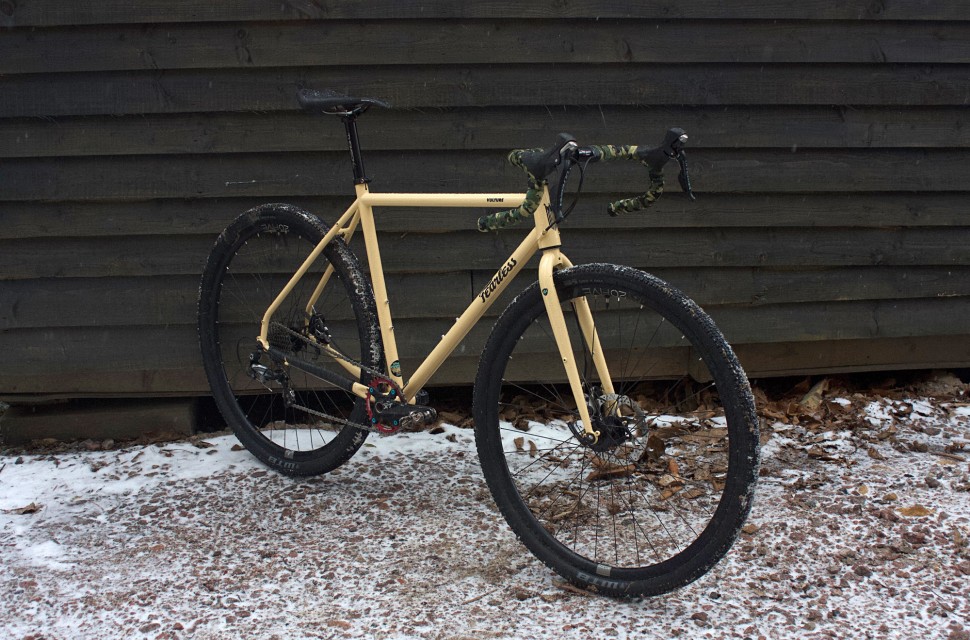 The Vulture frameset from Fearless Bikes is their first frame and fork and it lands bang in the all-road/adventure market. It's designed to be a bike that can be used for almost everything— road biased, but able to handle some mountain, cross or touring, though it's most happy being ridden on mixed surfaces with a strong ‘gravel’ leaning.

The Vulture is available as a frame and fork (it does come with a seatpost clamp) and our test bike was built up with Hope Hoops, a mix of Ultegra gears and shifters, matched to some TRP cable brakes, with a pair of Deore XT cranks. Thomson finished off the various other pieces but I’m not going to focus on the parts, as these are ultimately up to the rider and what they build the Vulture into.

Fearless bikes are designed in Brighton, and built in Taiwan from double butted Reynolds 725 Chromoly main tubes and butted 4130 rear stays, with some lovely looking ‘Breezer’ style dropouts at the rear. As well as offering a great weld point, the dropouts are set up for 135mm x 9mm quick-release axle, which these days feels somewhat traditional, but also a welcome and easy set up for most riding. There is clearance for 45c tyres, and the test bike I rode came with WTB Riddler 700x45c tyres and allowed plenty of room when I took it offroad, with the tyres giving up before they got clogged in the frame. 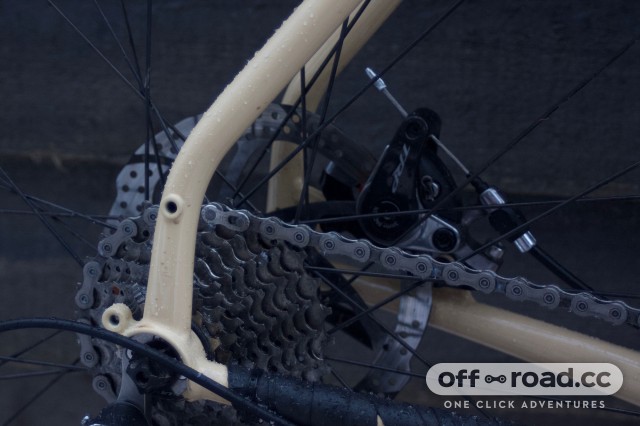 The frame is disc only - I.S. mount, with max rotor of 160mm rear and 180mm front. With a 1-1/8” - 1.5” tapered head tube, its got a more contemporary look to the front end; purposeful but not overbuilt. Again, good reasons for the tapered head tube, allowing a larger diameter downtube, resulting in a stronger frame, with a minimal increase in weight. Nothing especially new, but there is thought gone into the frame, almost cherry picking details from various classics and making a new standard.

The head tube has two gear cable guides, with internal tension bolts - handy for 11/12 speed gearing setup - these also keep cables away from the paintwork a little more and provide cleaner lines for cables. Elsewhere there are cable tie gear cable mounts allowing full length cables, and its nice to see them externally - easier to maintain and service. 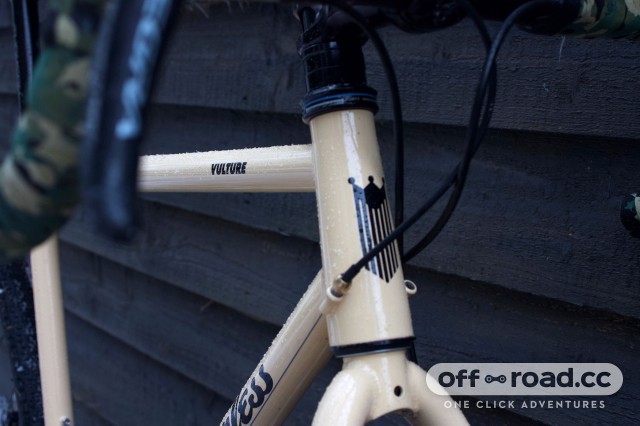 The rear stays have been well shaped to allow plenty of clearance and also almost any gearing size and type on the front - 1x, 2x, 3x road and off-road. The 4130 rear stays are seamless tubing and offer a good match to the front end tubing. Fearless mention they’d rather use tubing to solve a problem rather than machining complicated dropouts or chain stay areas as its stiffer and lighter. There is a forward facing seat clamp to keep the crud and gunk away from the frame and the tubes have an electro-discharge coating on the inside to prevent rust with a durable powder-coat on the outside - a little thin in places, but this was an early frame. Looks wise, the only major departure from a standard double triangle is the near vertical ends of the seat stays - which gives it a unique look - it also helps in the positioning of the disc mount and allows well-placed areas for racks or mudguards if required.

Since it's not a pure offroad machine, the chainstay bridges didn’t offer a monster amount of clearance, but more than enough for offroad adventures its capable of with the 45c tyres. The whole frame has a visually simple aesthetic, and it does all it needs to, and I like the ‘just the essentials vibe’ it has. Its higher head tube makes it comfortable for longer rides and yet the shorter wheelbase has kept some nice nippy handling to it. 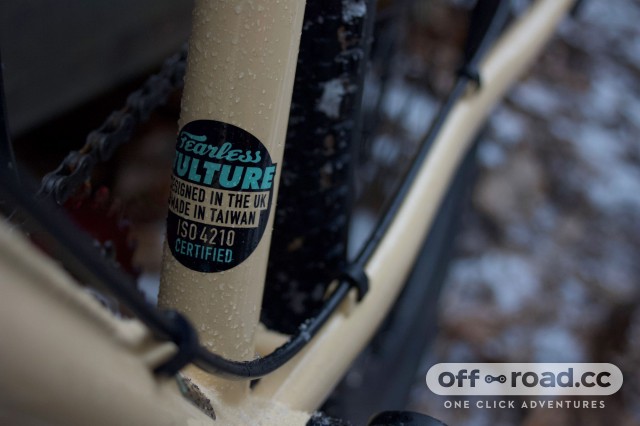 The ‘404’ fork felt purposeful and accurate when riding - there was the usual degree of flutter under sudden, heavy braking but nothing horrific. I’d like to have seen bolt through options here, It just makes for a way more accurate ride and steering feel. A quick-release on the back is less of an issue with the lack of steering forces and a more solid disc mount position.

The 404 forks are in no way lacking, but adding that bolt through would tighten up the forks handling, but may spoil its classic leanings, and also make it less current market compatible. It's built from the manufacturing factory's 4130 chromoly, and you could always invest in a carbon fork if you have a more race bias to riding, or just want to lower the weight. It's a little longer than average which is due to making the frame more compatible with a modern carbon disc fork, and the headset type.

The geometry is a  pretty safe set of numbers, with the 71° head angle and 74° seat angle not throwing up any big surprises. It's a semi-compact type so the wheelbase isn’t as long as you might expect, which gave a nimbler feeling offroad - weaving along smooth single track on it is a hoot, and you can really duck and dive into and out of corners. I think the fact that the Vulture is really adaptable is what adds value to it, for instance, with a quick change of tyres you can go from off-road to road. It’ll let you run whatever mech-based gears you’d like, and it's not back breaking to be on for prolonged periods. The bike as tested weighed in at 10.28kg.

Out riding, I put it down lanes, across fields, round the local singletrack, forest double track and all that links those surfaces, and I was pleased with how at home I felt - I couldn't help but consider my old Surly Cross-check, but the Vulture is lighter feeling and with more zing to it. Of course, being steel it does filter out some low-level vibrations, and although it's not the lightest on the scales, it belies the overall mass. My first thought was what separates it from other framesets are the clean simple looks and graphics, the adaptable and comfortable ride, which remains inspiring off-road. This all makes it a great base for a workhorse type bike, fun commuter or versatile gravel bike.

The frame and fork are competitively priced at £499 (posted) and include a seat clamp.  I see the Vulture as a worthy addition to the steel frame market. It has the right amount of detail and attention to finishing and geometry for it to offer another choice. And being able to build it up as you like, is a good option. Fearless says they’ll be working out some rolling chassis builds in the future and essential build kit to accompany the frames.

Aimed at the all-road/adventure market - a frame set that offers the ability to build a racy cross bike or a lane adventurer.

Its steel, its not silly light, its going to last a while.

Big tyres and a steel frame - comfortable unless you slam down a rock field, in which case you are probably on the wrong bike.

Not amazing value, but comparable to similar style frame sets.

For lanes, gravel type terrain and off road tracks the Vulture is right at home - its predictable but not neutered handling makes it a rewarding ride.

Being a Brittish designed steel frameset is always going to win appreciation, and the Vulture is a quietly confident bike, and the fact it can switch hats easily is a great bonus.

I struggled to find anything to dislike In all honesty.

I had plenty of fun on the Vulture, and would have been happy to mix and match some parts on it to see its character more.

If I wanted a drop barred, adaptable frame it'd be on my list

Perfect for a rider looking to build up a reliable and versatile bike.

In short, the Vulture is adaptable, and it plays well off-road and on firmer surfaces. Its not pretending to be anything incredible, but it brings a definite and valid option to the choice of steel allroad/adventure bikes at a price that isn't wandering into serious investment. Fearless have done their homework and made a frameset that is as capable as claimed and also does what its built for.