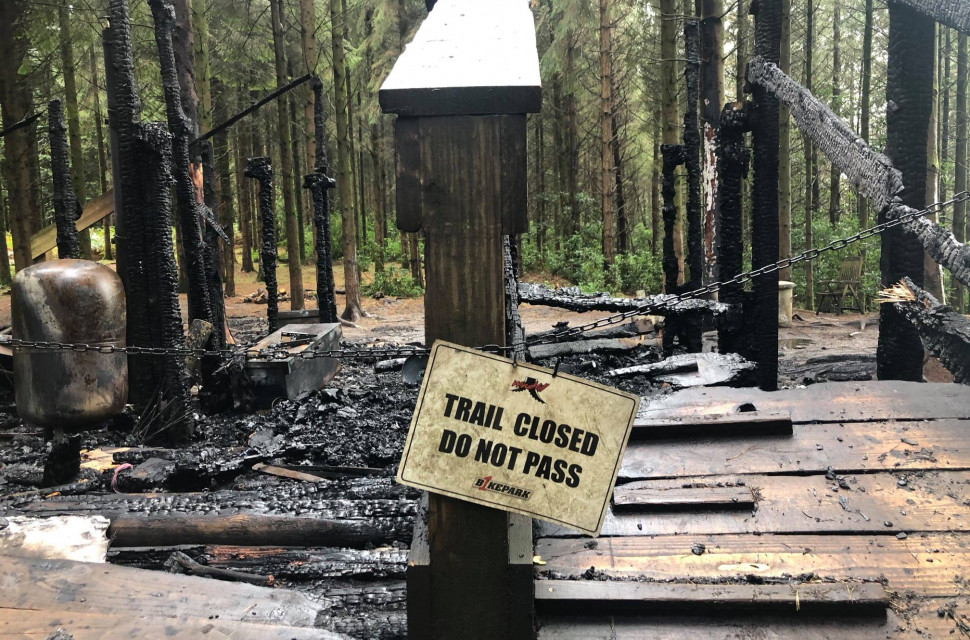 The owners of Windhill Bike Park set up a GoFundMe page to help raise the funds needed to rebuild the large start ramp and welcome hut as well as to replace tools that were damaged or stolen in the recent fire.

We brought you news of the devastating fire that does not appear to be an accident last week. This week the owners of the park have set up a fund raising page to "Make Windhill Great Again", with a £20,000 goal its clear just how much damage was sustained during the incident.

Today (2nd October 2019) we saw some shocking news on Facebook, as Windhill Bikepark on the Longleat Estate, Wiltshire posted news that parts of their trails had been set on fire overnight on the 30th September in a fit of mindless vandalism.

From the photos posted looks like the hut at the top where you will have paid for your session, bought a cup of tea and warmed up by the wood burner in the winter is destroyed, as has the large start ramp at the top of the trails. The photos show utter destruction, so mindless that it's hard to comprehend. 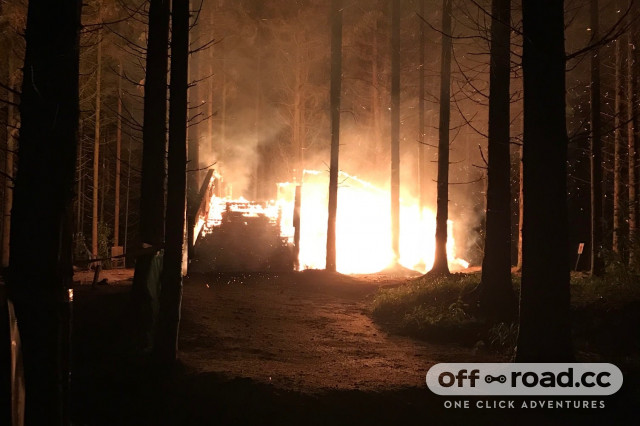 Windhill is a very well known bike park in the south of the UK with a good mix of freeride jump trails and more technical downhill trails, all accessed by a quick push up. The park could be best known for it's radical 'Boner Log' jump but also for a good mix of blue to black trails making great use of the hillside. It received recognition for its efforts y winning 'Bike Park of the Year' in 2017. 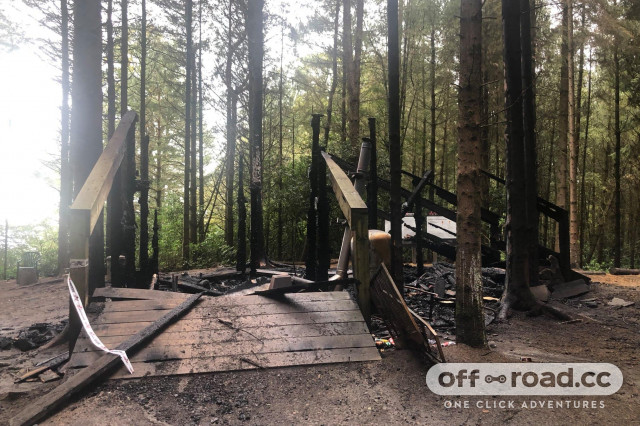 Other than the Facebook post, internet details are scant on the internet but it is clear from the wording of the post that the owners think that this was no accident and that police are involved and investigating.

"Some days start great others not so great. Yesterday, flipping open the laptop to check morning emails, looked like it wasn't gonna be a great day ...

I have some bad news for you I’m afraid.

This morning one of your sections of the bike track has been set on fire.'

Thinking it bit odd that someone would build a fire on a section of track, I scrolled down to attached pictures. That's where I discovered the level of understatement the sender's opening gambit displayed and the true level of senseless destruction that we faced.

It's hard to describe the sinking feeling I felt seeing the pictures forwarded ..... Our iconic Start Cabin, the start point of hundreds of thousands of minutes of fun for riders from around the world and a cosy rest point between runs was gone.

Hundreds of hours from the team and volunteers & Tens of thousands of pounds was gone. Awash with a range of emotions, rage, upset, sorrow, I sat numbed and not ashamed to say some tears flowed.

B1KE has been and continues to be a roller coaster, Highs and lows, excitement and fear, successes and setbacks, we've made friends with many and it would seem, enemies of a few. I guess it's like riding a trail for the first time, a trail that will test you, scare you a little, make you smile and occasional dish out a few hard knocks. There are moments you allow yourself to feel proud of your achievements but at the speed we roll there is not very often much time for that and its back to focussing on the next challenge. Like a trail, life can be full of rock gardens to navigate, seemingly insurmountable climbs to grind out, scary leaps of faith, but also sweeping sections that make you grin from ear to ear. It may be tough at times but giving up is never an option. And just like going for a ride its even better when you get to share it with friends or those that will become friends. To all of our friends out there we'd like to thank you for support, understanding, honest feedback that keeps us on track, encouragement and the happiness you bring to the parks.

The Cabin is gone and the hard work of many may seem to be lost, they'll be no more warming up round a log burner and banter beneath the beams, but a start point of some kind will rise from the ashes and the show will still go on. Bear with us while we deal with the aftermath and get plans in place for how to future proof the park, set your wheels in motion, and how going forward we can offer the shelter you sometimes need and where more good memories will be formed.

No start ramp but still plenty of good riding. Please come and ride and keep smiling and whooping your way down the trails. Fill the woods with the positive energy that the hard working staff feed off and makes all the parks so special.

Thanks the emergency services for their swift response and the wet weather for limiting the damage that a week earlier would have been far worse. 9 trees need to be felled but it could have been so much worse. Police investigations are of course underway and forensics doing their thing. Karma will prevail as ever.

Please keep away from the remnants of the ramp while the clean up is in progress and start your ride from the points indicated by the staff. The'll be no coffee/tea or snacks for a while and you'll need to report in to a van at the top of 'Blutopia' where 'Ark at E' splits off until a more permanent solution is found.

We've reached out to Windhill for more info and to see how we can help but we know that talking to the media is understandably low on their priority list right now. If you can ride there and support them in the coming week, its a great idea and will be appreciated by the Windhill team.