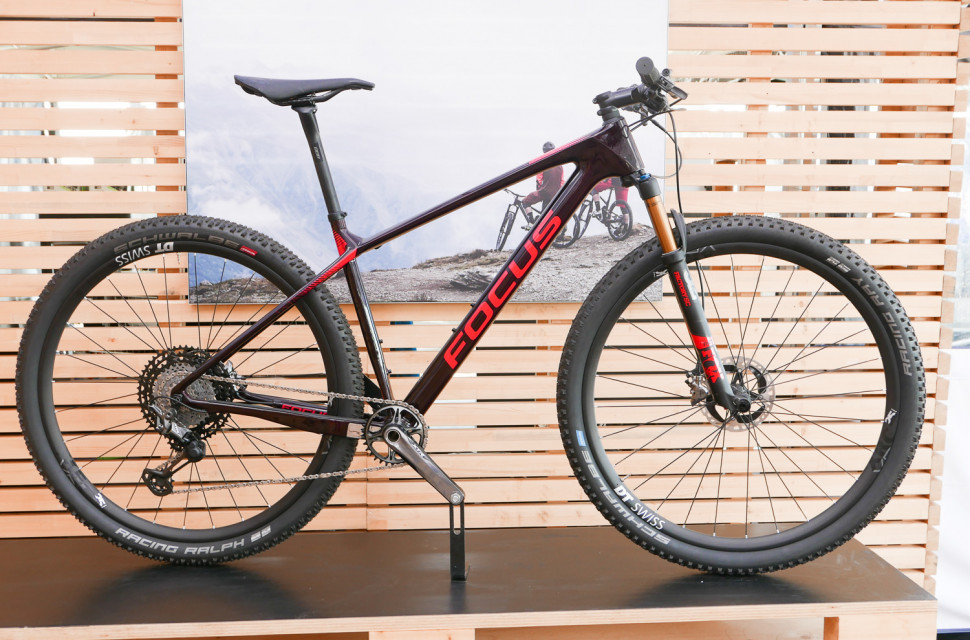 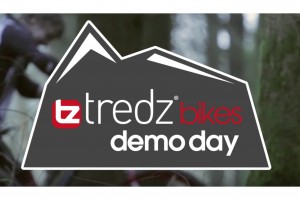 The Roc D'Azur is Europe's biggest mountain event, with tens of thousands of riders heading to the south of France to take part in rides and races. Because so many people are there, loads of brands flock to the expo area, meaning loads of fresh new bits of kit to show off. Here are some of the best mountain bikes and bits we spotted... 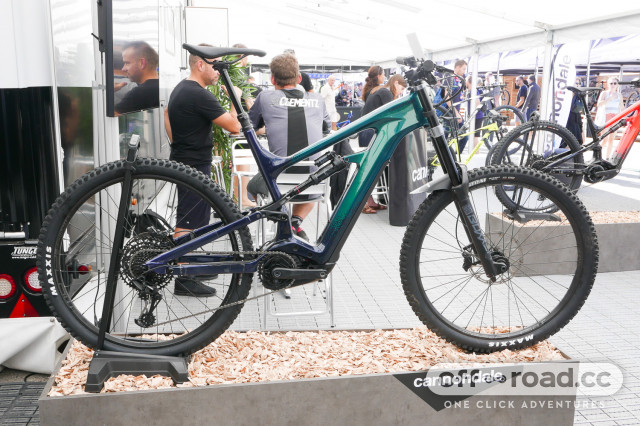 While it's still super lightweight, short travel cross-country bikes that most of the attendees are racing on, e-MTBs are the next biggest thing - and they don't come much burlier than Cannondale's Moterra SE. And yes, that is enduro legend Jerome Clementz in the background.

Fitted with a dual-crown RockShox Boxxer with 180mm of at the front and 160mm at the rear, it's the hardest-hitting member of their new Bosch Performance CX motor equipped, longer travel Moterra lineup of bikes. There's a mighty 625Wh battery built into the downtube, which should give you plenty of climbing time so you can rip the descents. 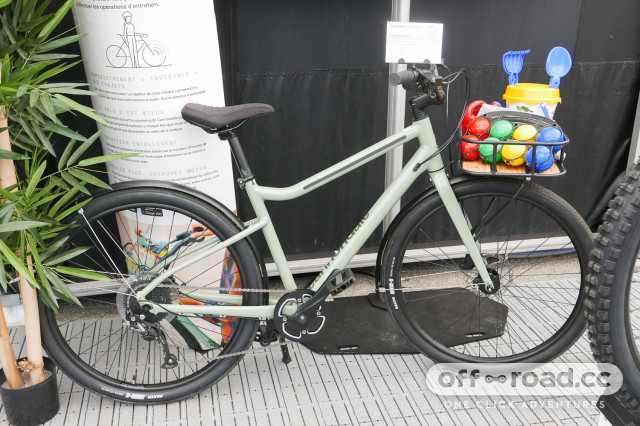 For those that prefer to keep things more relaxed, here's a wonderfully Gallic setup on their Treadwell city bike - boules and sandcastles anyone? 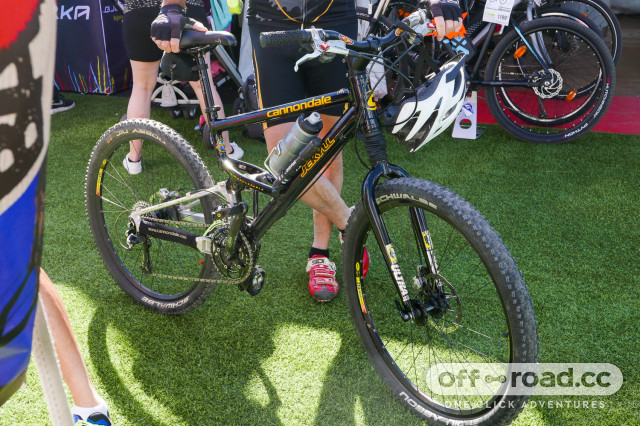 Here's a retro blast from the past too in very fine and presumably uncracked condition - one of the original Jekylls. Got to love a Headshok... 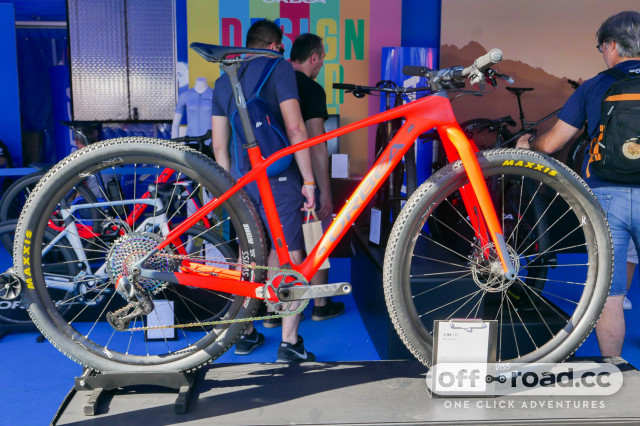 Spanish brand Orbea had this extra lightweight version of their Alma 100mm cross-country rig in attendance. The M-Ltd does without the fanciful luxury of a suspension fork and instead gets a full-carbon rigid fork up front so you can destroy any cartilage in your upper body while destroying your rivals uphill. Looks masses of Type 2 fun and just the thing for the Roc's marathon riding. 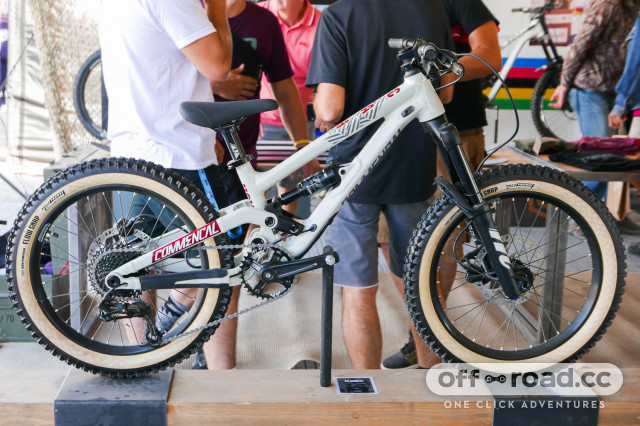 We're suckers for a rad looking kid's bike and this Clash 20 looks pretty damn trick, with cartoonishly fat tyres on 20" rims, 130mm of rear and 120mm of front suspension from Manitou and proper hydraulic discs. Bike weren't like this in our day... 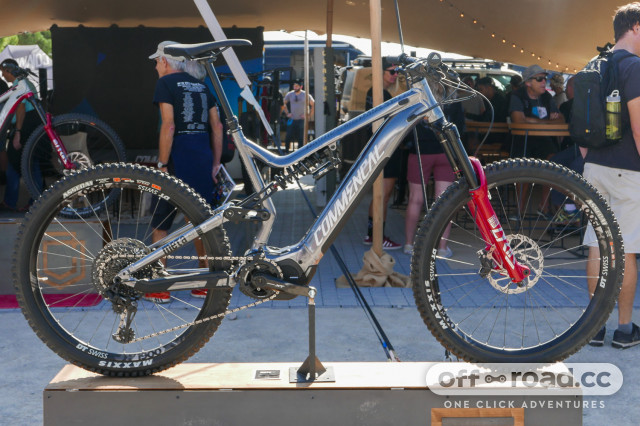 For the grownups, the Meta Power 27 SX e-MTB looks like quite the e-enduro sledge with 170mm of coil rear and 180mm of RockShox Lyric up front. Mind you, with a claimed weight of 23.9kg, you'll definitely be needing the Shimano motor and 500Wh battery to get to the top - but the descents should be no trouble. 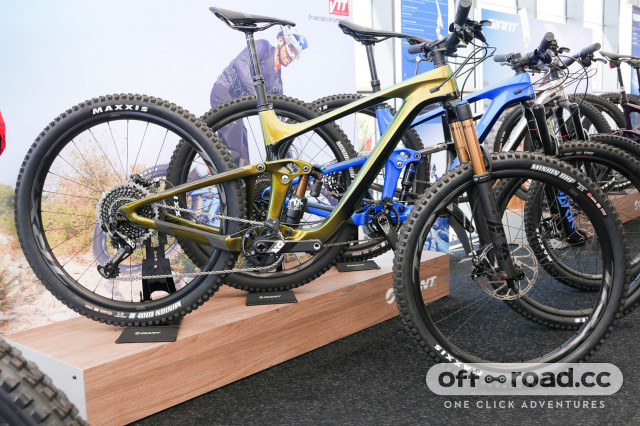 Don't worry! Normal meat-powered bikes aren't dead - the new Giant Reign 29 is one of the new breed of big travel big wheelers and very fine it looks too, with this tip-top end full-carbon version getting a very flash paintjob too. 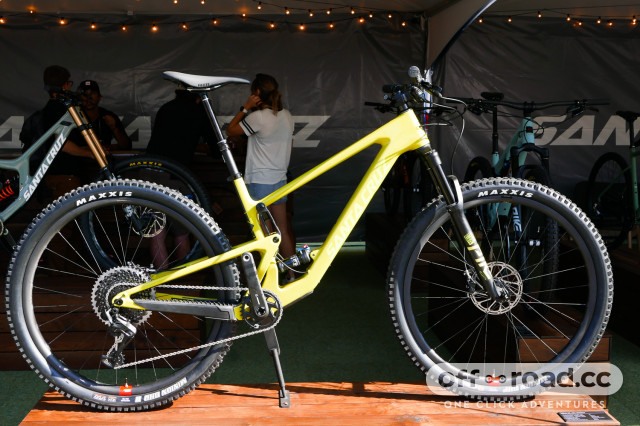 If the Reign's 160/146mm travel split is a bit much for your tastes, the new Santa Cruz Tallboy offers a more relaxed 130/120mm of squidge, complete with low-slung shock mount first seen on the Nomad. Tres jolie! 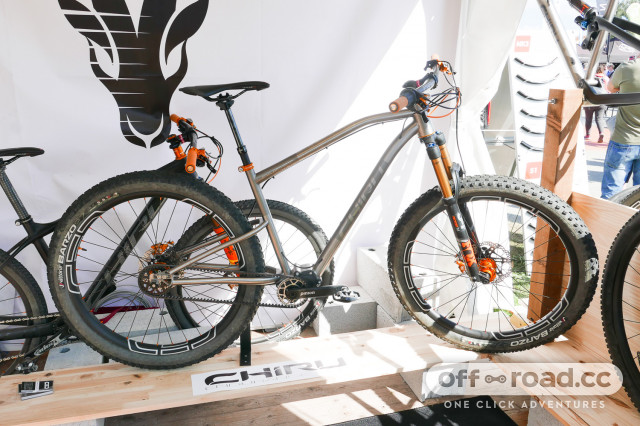 A little more leftfield is this hardtail offering from French brand Chiru. It makes some fairly bonkers lightweight carbon kit, but they also do a number of titanium adventure bikes. The Divider is said to be inspired by the French Divide ride - a 2,200km bikepacking time trial - with a low maintenance Pinion gearbox and Gates belt drive.

You can fit fat 29x2.6" or really fat 650bx3.0" rubber and you can go up to a 130mm fork on the front, while that bonkers rear end is designed to maximise compliance for all-day comfort. 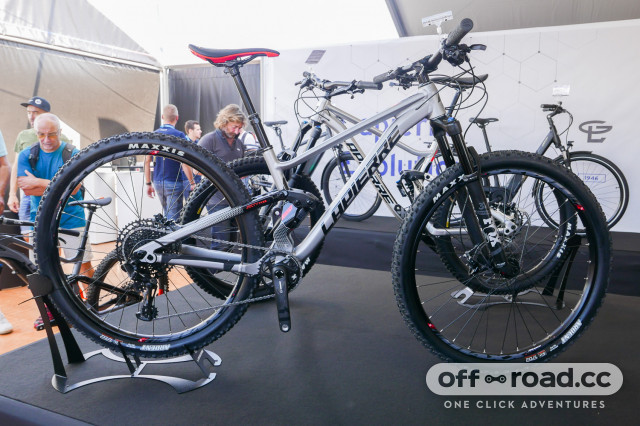 While they're not quite as big in the UK as they once were, Lapierre are still a very big deal in their homeland, with this new short-travel version of their Zesty AM being their star of the show this year. 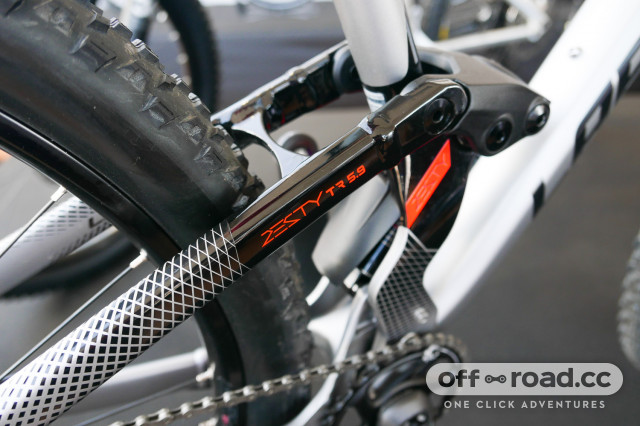 It's got 120mm of travel at either end using a similar shock layout to the bigger Zesty and Spicy models, all with the design input of MTB legend Nico Vouilloz. Extra points if you can spot him in the photos... 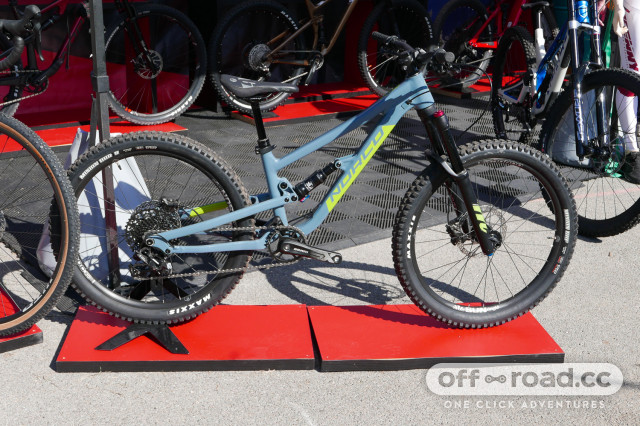 Another addition to the 'the-kids-have-it-so-good-these-days' is this 24" wheeled full-sus bike with 120mm of bounce, again via Manitou's kid-specific suspension kit. There's an all-aluminium frame, dropper post and progressive geometry, plus you can get it in a 20" wheel model too. 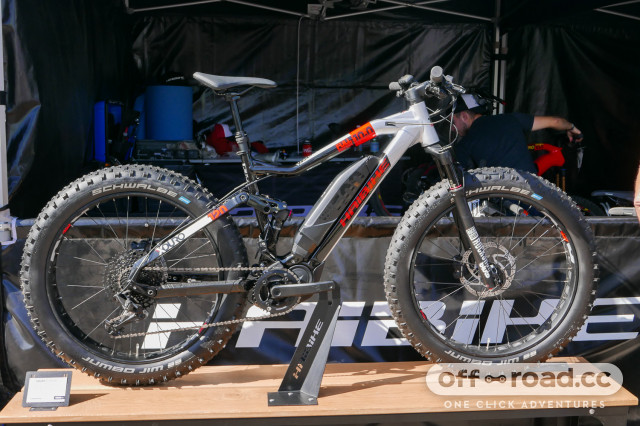 At one point in time, a fat tyred, full-suspension e-bike would have been most niche thing possible, but now it's all hit the mainstream. We suspect this Yahama motored beast might be mainly chosen by end-users for the cartoon looks rather than the soft terrain ability, but given some sandy dunes, it's probably a right laugh. 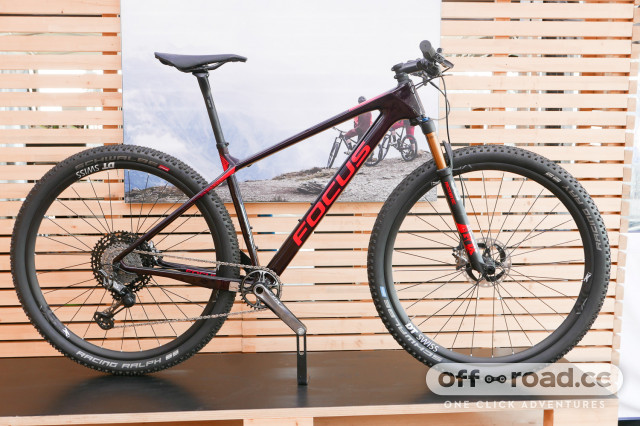 Moving away from messing about to the task at hand - namely making blood come out of your eyes while racing the Roc D'Azur - we have Focus' top-end cross country Raven 9.9 racer. Full 12-speed XTR on a carbon frame with a Fox 32 Stepcast fork and carbon DT Swiss wheels equals not a lot of weight and quite a lot of go, we suspect. 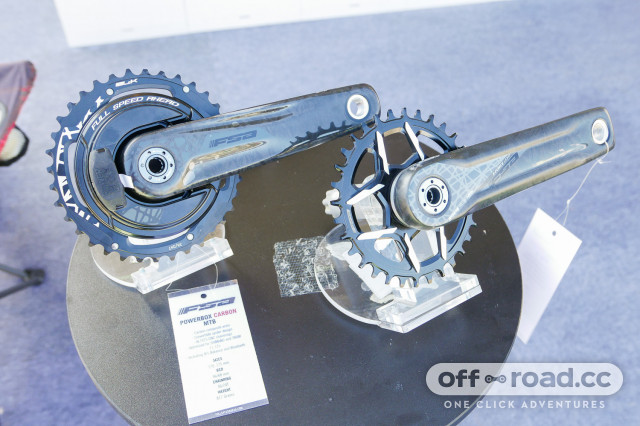 We'd been unaware that FSA did power-meter cranks but it turns out the Powerbox has been around for a little bit, though the original €1,199 carbon armed version has now been joined by a more affordable €649 aluminium armed version.

They're available in a wider range of sizes if you pick metal arms too, with 165mm, 170mm, 172.5mm and 175mm length arms as opposed to the carbon's 170mm and 175mm lengths, but you don't get the right/left power balance measuring. 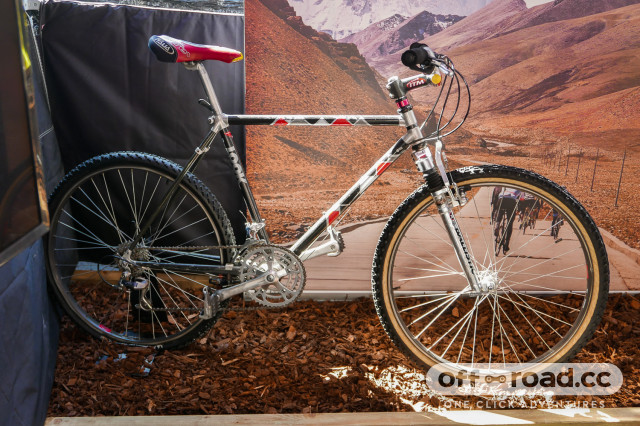 French manufacturer Look doesn't do mountain bikes anymore, but they were around in the early days, as this alloy lugged, carbon tubed retro whip shows. The construction was ahead of its time, but the geometry looks frankly terrifying nowadays. 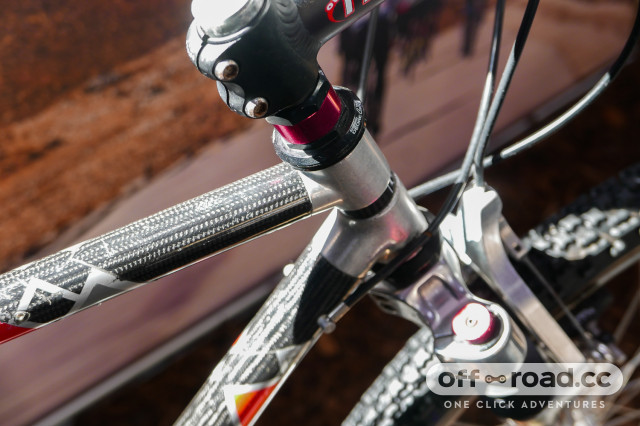 While Look has given up on mountain bikes (for now) Jon did get a go on their 756 RS gravel machine, so their days of dirt aren't quite over yet. Check back for a first ride on that soon.