Skip to main content
Log In Register
New carbon trail bike for under 2k - no, that isn't a typo 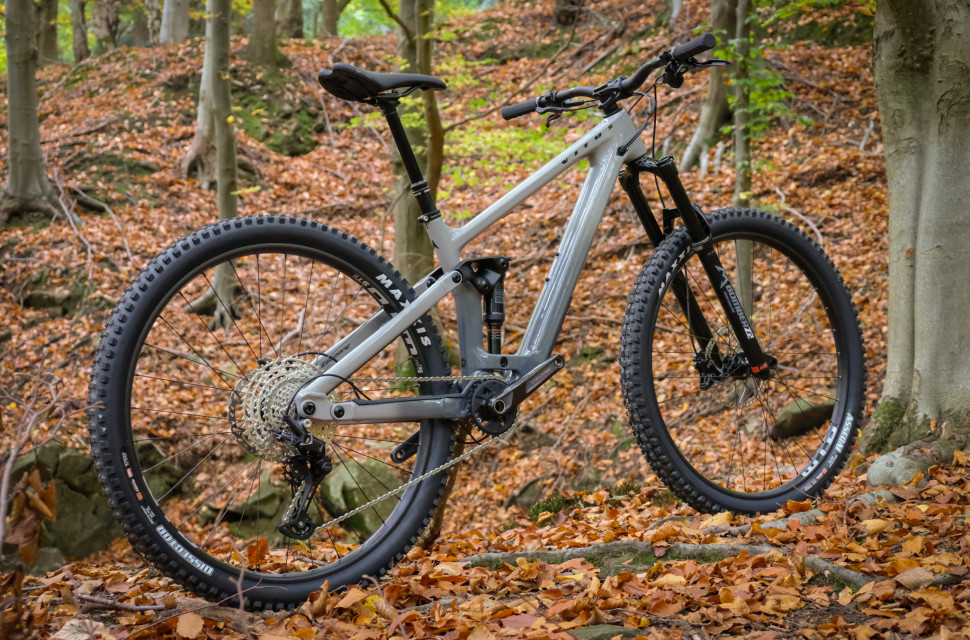 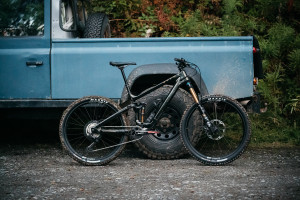 Is this the best value carbon, full suspension trail bike you can buy? The 2021 Vitus Escarpe range has just been launched and it's had a huge overhaul. There's a new suspension layout, progressive geometry and all the bikes get a carbon front triangle, including this CR 29 version for £2,000.

As always here at off-road.cc we like to test bikes that hit the more budget end of the scale. So we asked Vitus if we could test the 2021 Escarpe CR 29 and luckily for us, they said yes. This is the cheapest bike in the new range comes in at a penny under £2000. If you want to know more about the new range, on the whole, click this link for the full news story. 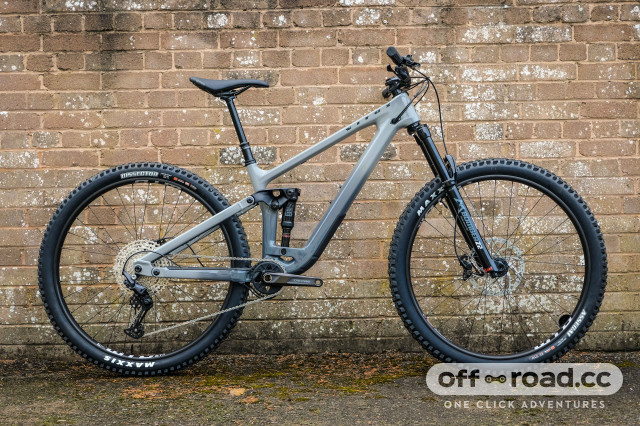 So first off, all bikes in the Escarpe range get carbon front triangles. Vitus says they wanted to commit to using carbon to create bikes that rode well and looked good. They say the goal was to "provide their customers with a lower entry into high-performance bikes allowing them to progress and RIDEMORE" - the logo you'll see on the top tube. 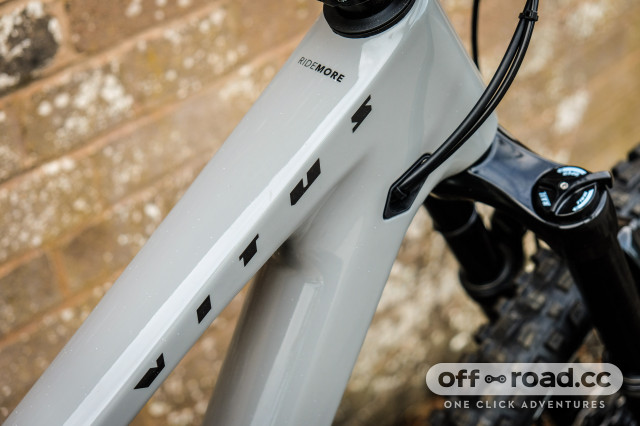 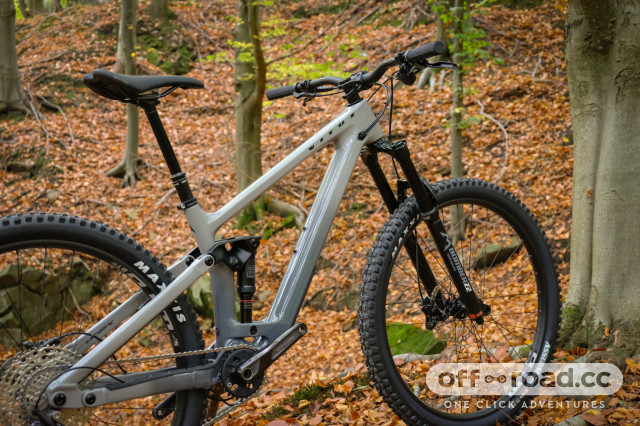 To do this the brand had to look to save money in other areas of the bike. For this reason, the rear ends of all the bikes are made of alloy. Vitus says they have also managed costs by sharing the front end with the new Sommet for the like for like wheelsizes. They also save a bit of dollar by providing internal cable routing right through both parts of the frame, but it's not 'tube-in-tube' internal routing though. 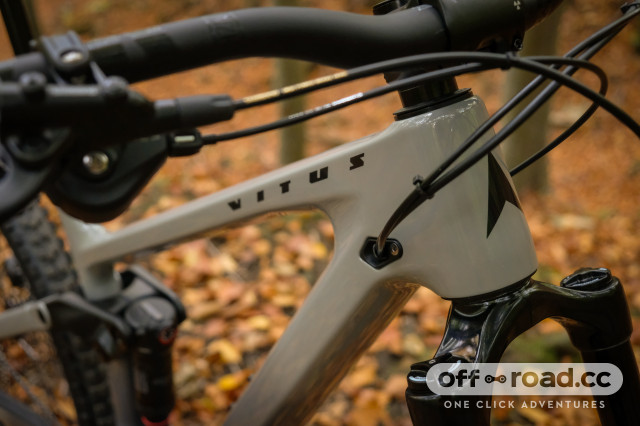 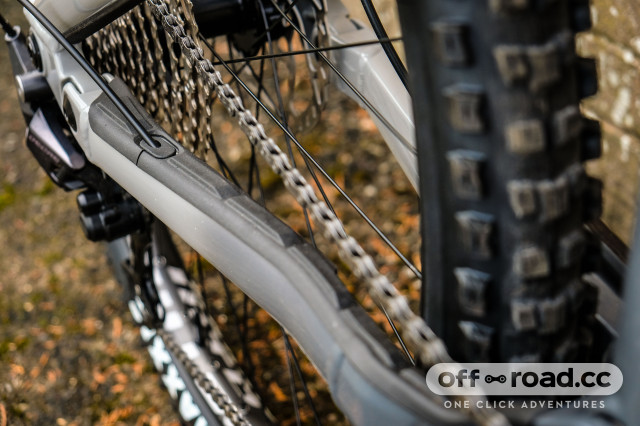 It does, however, get a threaded bottom bracket, larger bearings in the frame, the universal SRAM UDH mech hanger and some chunky frame protection. 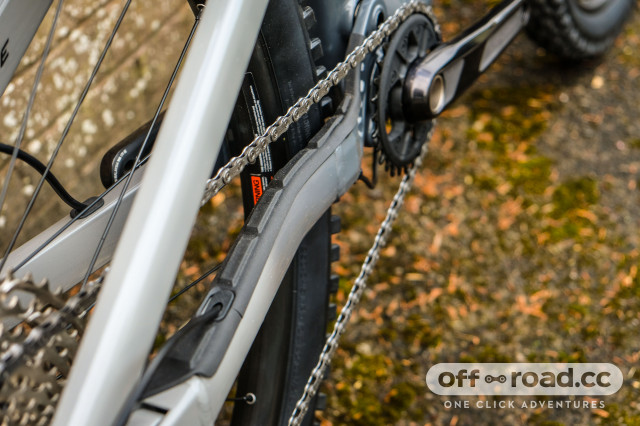 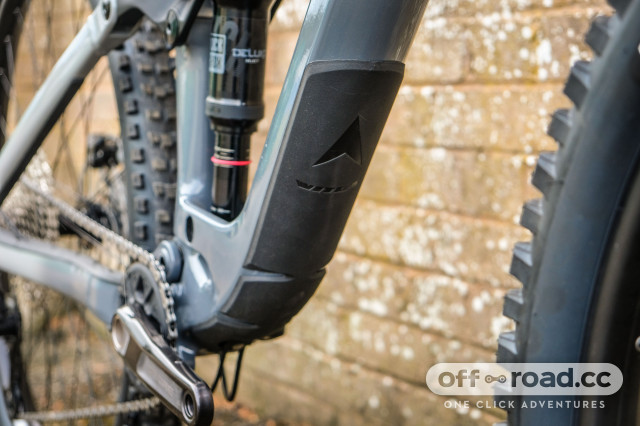 A fact most will love too - there's room inside the front triangle for a water bottle. 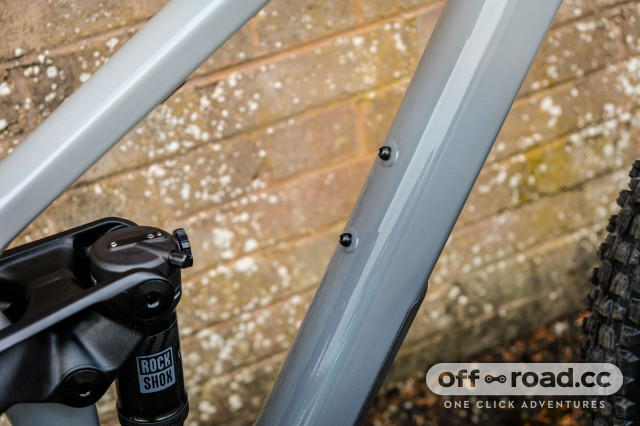 The 2021 bikes get updated geometry and suspension too. The Escarpe is the 140mm trail bike (the Sommet is the longer travel enduro bike) and the suspension is much more progressive than the 2020 bikes. The Escarpe gets a 65 degree head angle and a 77 degree effective seat angle, that’s when it's paired with the stock 150mm fork. That head angle and seat angle should lead to a bike that is and is efficient climber as well as a solid descended but, of course, only riding the bike will be able to tell me that for sure! 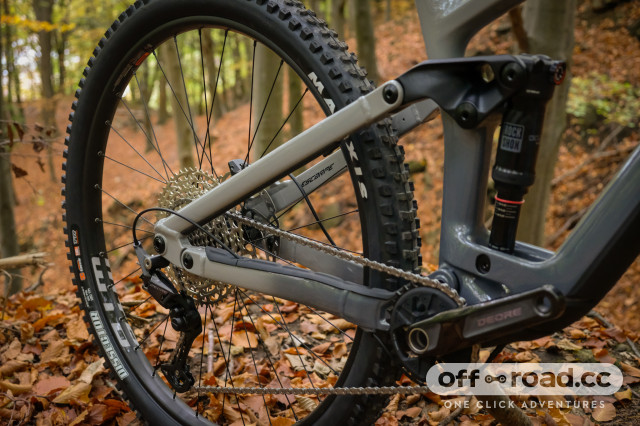 The frame reach is roomy at 451mm on this medium bike too,  then there's 440mm chainstays and a wheelbase of 1218mm. Geometry alters very slightly on the 27.5" wheeled bikes. Both 27.5 and 29er bikes will have four sizes in the range, geometry charts are below for each. 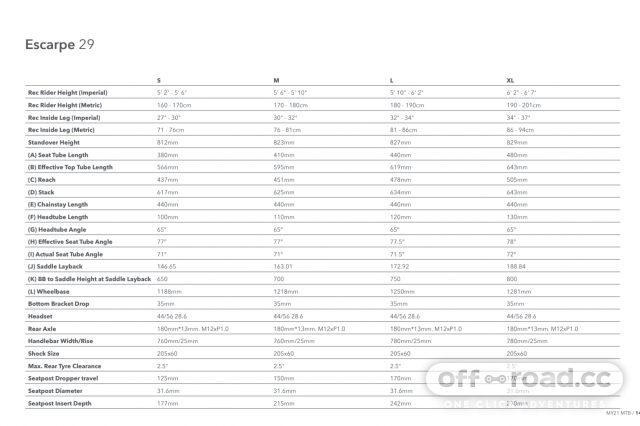 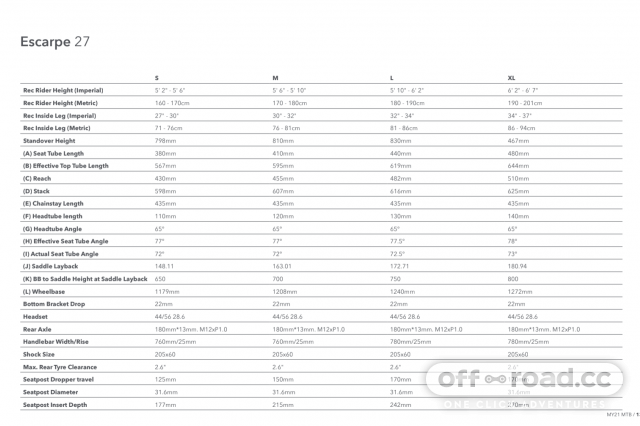 In terms of suspension layout Vitus now use a fixed lower shock mount to allow for the new flip-chip, which adjusts head angle by 0.5 degrees and raises or lowers the bottom bracket y 6mm. They say the new design has also allowed them to refine the suspension kinematics, providing a more progressive leverage curve for a more consistent feel. If you can remember the 2020 bikes, they had a shock which went through the seat tube (see here) and inserted on the chainstay. The Horst link is now cleaner in looks and ready, with the new leverage curve to accept a coil shock if you wanted to fit one. 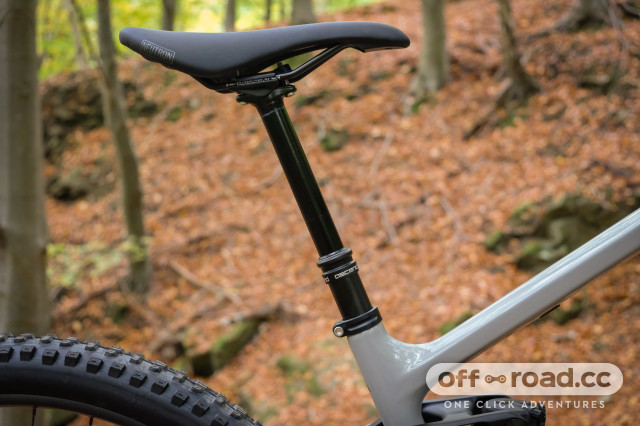 Just as their friends at Nukeproof have, Vitus have made the effective seat tube angle steeper as you go up the size range so it’s optimal for each rider height. Last but not least the redesign has taken into account the need for longer dropper posts and there is now greater seat post insertion. The small bikes get a 150mm post, the medium gets a 170mmm dropper and the Large and XL 200mm Brand-X Ascend posts. 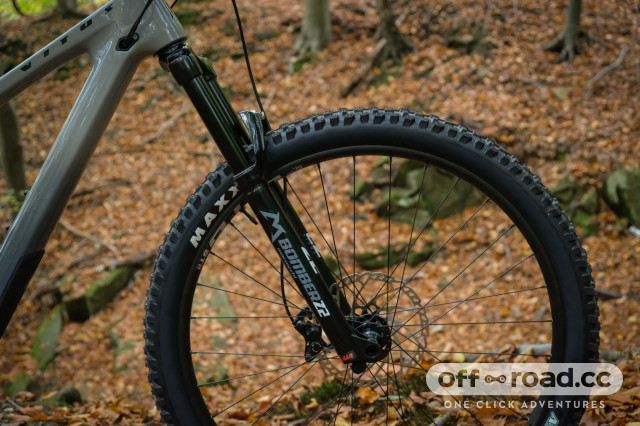 All bikes come in the three specs and in both wheel sizes of 27.5" and 29er.  It’s interesting to see a brand not stick to one size wheel, especially on this 140mm trail bike where other brands such as Specialized with their new Stumpjumper have gone 29er only. 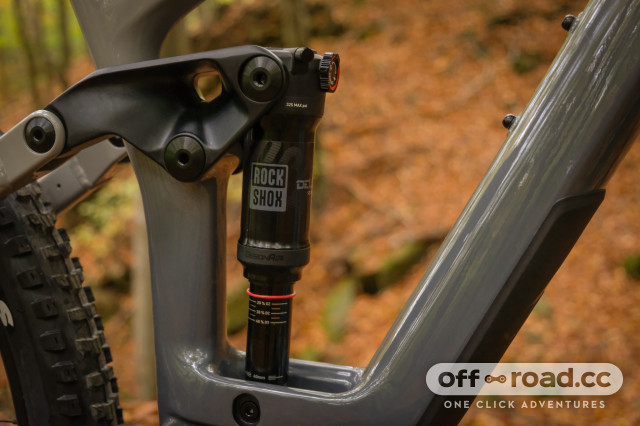 The bike we have on test is the base spec Escarpe CR which gets a Marzocchi Bomber Z2 RAIL fork, Rockshock Deluxe R shock and Deore 12spd drivetrain. It also is equipped with Shimano MT420/410 brakes, which means it has a four piston caliper up front and a two-piston calliper at the rear using 203 and 180mm discs respectively. 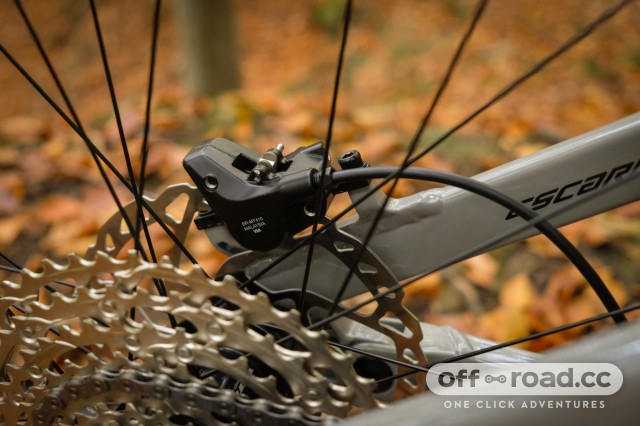 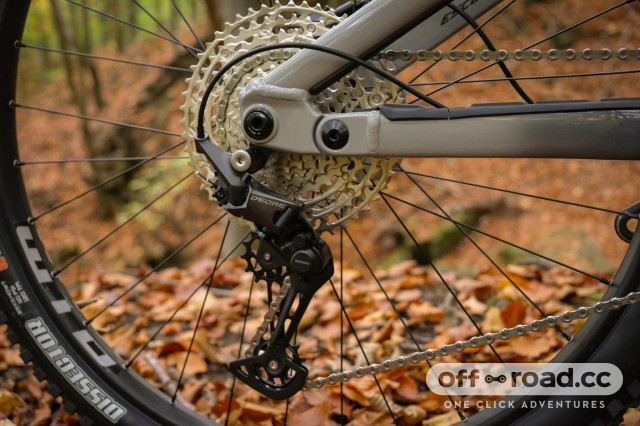 Elsewhere there are WTB ST i30 rims with Vitus own brand KT hubs and a good set of tyres, namely a Maxxis Assegai on the front and a Maxxis Agressor at the rear, both of which have the 3C Maxx Terra compound and have EXO casing. 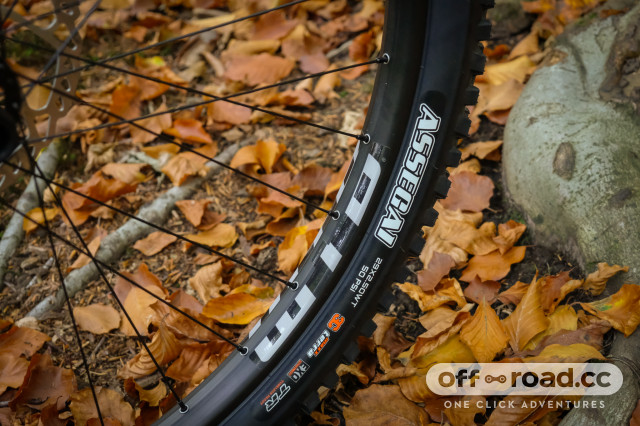 There is the aforementioned Brand X dropper post and then a Nukefproof cockpit with 760mm bars fitted to the Small and Medium bikes and 780mm wide bars on the Large and XL bikes.

That all sounds pretty good, which brings me back to - "is this the best value carbon, full suspension bike you can buy?" Ony riding it will really tell the tale but with the new 29er Specialized Stumpjumper costing £1,900 for an alloy bike, the YT Jeffsy starting at £1999 for an alloy bike and the Canyon Spectral carbon bikes starting at £2,899 (albeit with slightly higher spec), it's looking good for the Escarpe. The full range and prices of the Escarpe are as follows:

We'll be back with a full review soon, keep an eye out on the site and on our YouTube channel.

Is there a full review of this bike following the first look ? ..