Skip to main content
Log In Register
Find out what happened all weekend, plus flick through our huge photo gallery

The Malverns Classic mountain bike festival returned this year after a 20 year hiatus, with some apparent high standards to live up to and a promised list of events sure to provoke some reminiscing, we were keen to see what the revival would bring. We spent the weekend camping out in the Malverns, riding bikes, drinking beer and fully immersing ourselves in the festival spirit to bring you a massive photo gallery and the low down on the return of the legendary event.

If you haven't done so already, scroll back up to the top of the page and have a gander at the huge photo gallery of the weekend, there's loads in there (plus a dragon that hucks) to give you a real taste of what went on during the Malverns Classic weekend. Right, now you've had a look at that, let's get started! 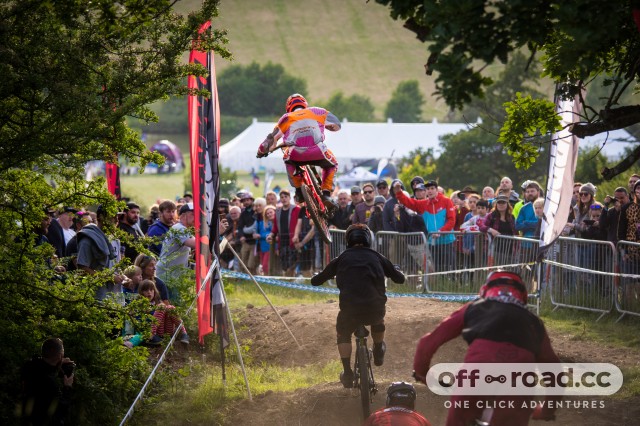 The Malverns Classic returned to Eastnor Deer Park near Ledbury for three days on the weekend of the 15th-17th June 2018. In the ground of the park, overlooked by Eastnor Castle, a stately home which is usually the stomping ground for Land Rover testing rather than bike riding. With camping provided onsite, we pitched the canvas from Thursday night and got stuck in! 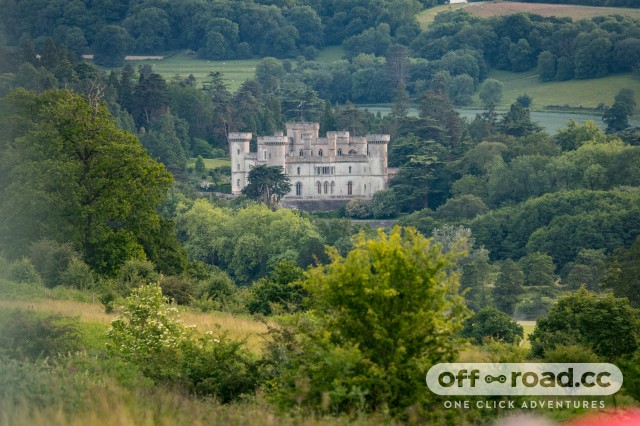 With vendors all set up, courses open for riding and the beer tent serving there was plenty to do from the off. Sussing out the enduro, cross country and downhill courses proved that this event was to be retro to the very tee. We razzed round the open grassy trails on our modern trails bikes, deciding that things might have been far more technical on a bike of yesteryear (20 years previously that is)! Whilst not technical, the courses were certainly reminiscent of the tracks that would have flowed down the side of the hill towards the valley floor in the Malverns Classic heyday. 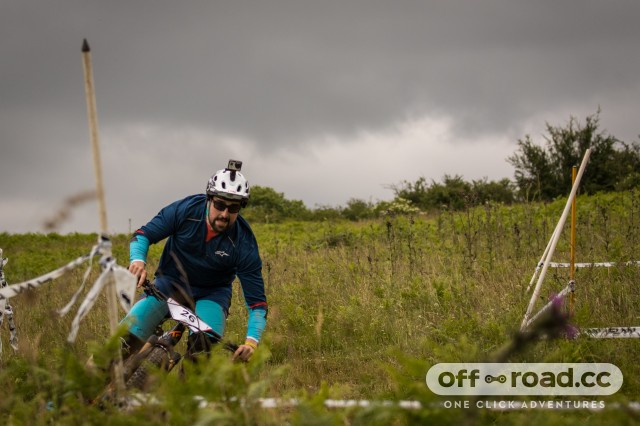 Getting low and wide on the grassy turns

The highlight of Friday was the Dual Slalom which saw spectators line the course for a mammoth dual session, finishing just before dark. The event is sponsored by GT Bicycles and was graced by the presence of Wyn Masters who did his best to take the top spot in the slalom. There were plenty of other famous faces to including Chris Smith, Scott Beaumont and Josh Bryceland to name a few. The men's finals was a shoot out between Trailhead rider Richard Webster and Wyn Masters, Emir Davies and Same Dale lining up for the men, with Emir taking the win by a tiny margin. 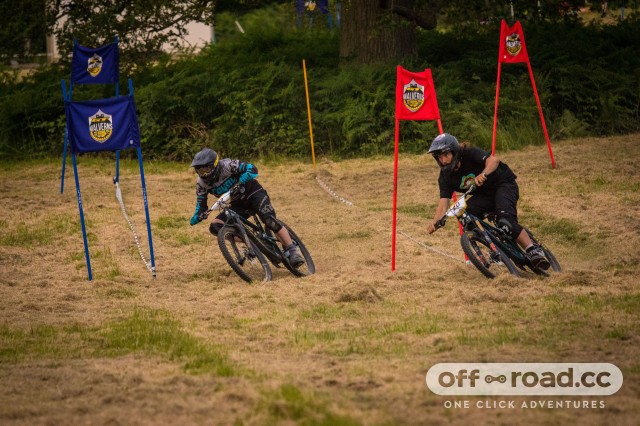 It was tight racing!

The ladies made the night though with Tracy Moseley and Katy Curd providing neck to neck racing with Moseley just pipping Curd to the post by a hair's breadth - 12 weeks after giving birth, Tracy has very much still got it! 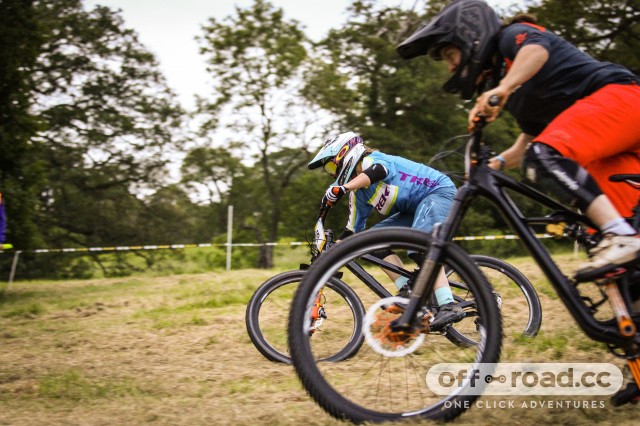 Saturday dawned drizzly but without dampened spirits and with a large schedule of racing to get through. Not only were there a huge amount of bikes on offer to demo, an entire village of mountain bike vendors to visit and hundreds of retro bikes to admire, there was also a full day of cross country racing, a enduro and the Quad Eliminator to get through. 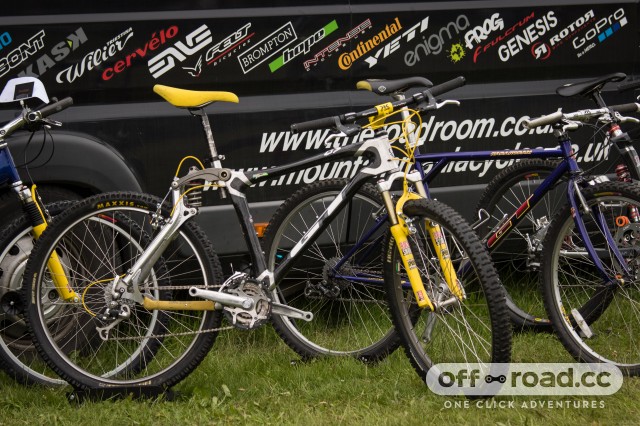 Classics as far as the eye could see

The cross-country consisted of a 5.2 km tour of the Eastnor Estate and after overnight rain looked to be a slippery, grassy lung buster. The elite men took on five laps, won by Ben Wadley which the elite women race of four laps was taken by T-Mo protege Harriet Harnden. In between there was every category of racers from the tiny under 8's to the retro bike racers, looking a tad uncomfortable but still flying! 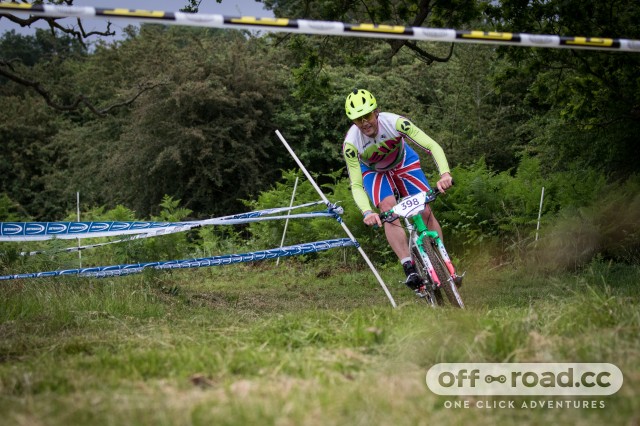 The enduro consisted of three similar stages in a mash-up format designed to be good for the very grassroots of the sport. As we all know though, things get easier so you just go faster, proving the course to test more proficient riders to the speed extremes. 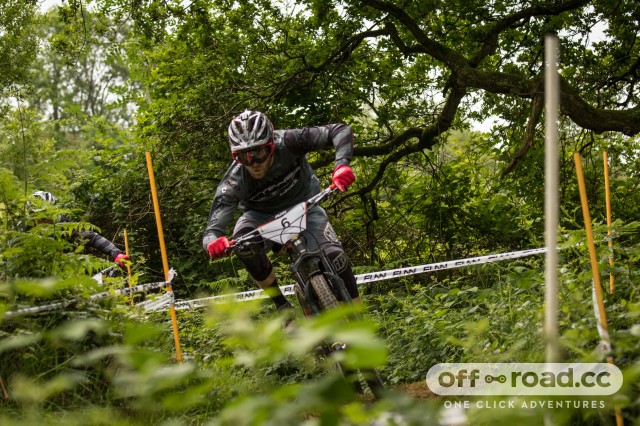 Again the afternoon held the highlight with the Quad Eliminator dominating the downhill track. Think 4x but fewer jumps and flat grassy turns and you'll have a good idea what it entailed. A sprinkling of the wet stuff ensured those turns were as spicy as they could be as racers set off in groups of four, elbow to elbow, with two knocked out each race. We were treated to speed and style from the 50to01 crew, Wyn Masters, Ben Deakin, Emir Davies amongst lots more! 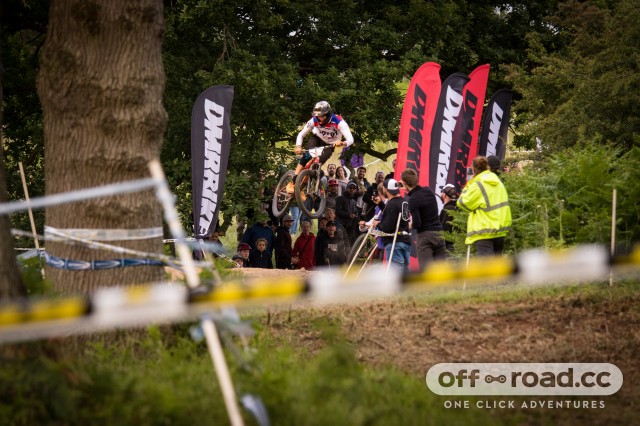 Bryceland in action during the Quad Eliminator

Sunday offered more opportunities for demo bikes neck to be wrung, with the e-bike curious getting their fill on the enduro and XC tracks from the day previous. The downhill race, including the 'MBUK Legends' filled the hill for the majority of the day, putting cornering skills to the test in a battle between old and new (bikes that its...) Many of the legends rode their retro bikes if they still had them and all donned old kit, or if you are Rowan Sorrell, a dragon onesie! 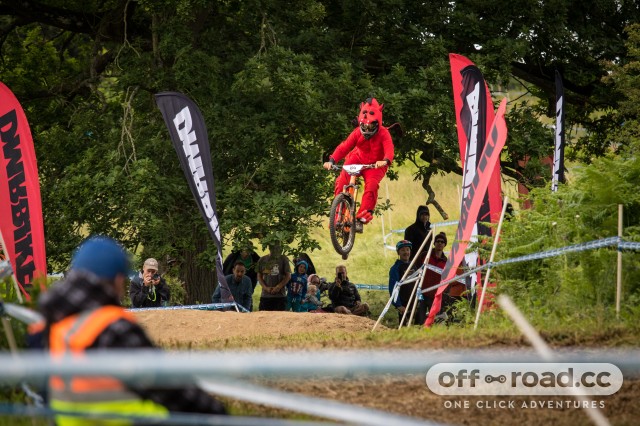 The Malverns Classic proved to be a great revival of the old festival, which we think will only improve with age and experience. If you like your bikes and your events retro style then you should get your name on the list for 2019. And if you don't then it's still a bike related weekend away with plenty to do, see, demo, buy and watch, worth a day trip at least!