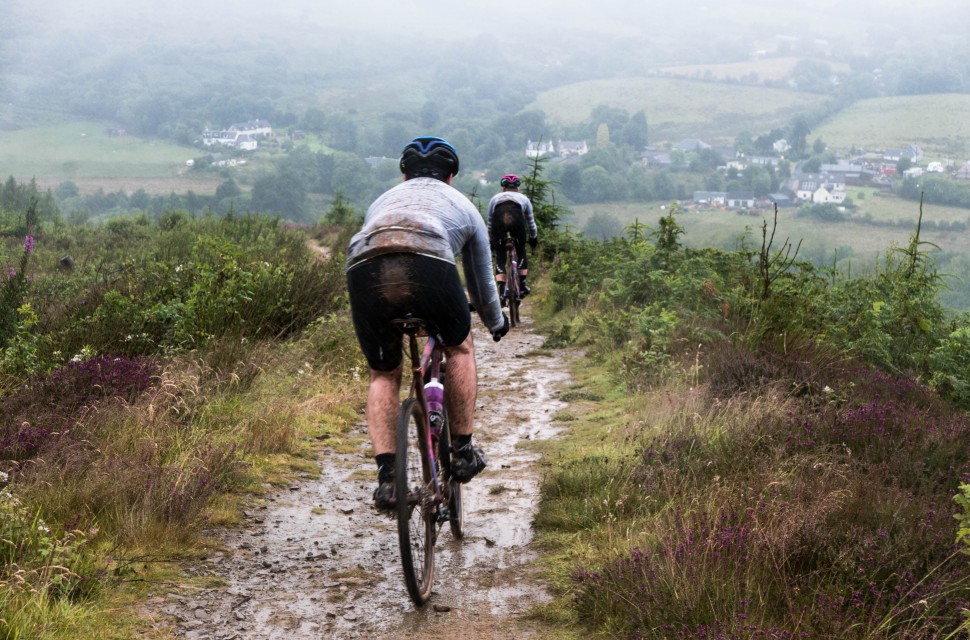 I rode the inaugural edition of Grinduro UK on the Isle of Arran on the west coast of Scotland, grinding and grinning my way through gravel, mud, rain and racing. A combination of great route, riding and atmosphere came together to create a weekend to remember.

The Grinduro originates in sunny California but received a positively soggy Scottish welcome. The weather didn’t manage to dampen spirits at all and the spirit of the Grinduro was alive and well. This event is not just a race, it’s a celebration of cycling culture and the organisers want you to have just as much fun off the bike as on the bike – “The Grinduro is about the party as much as the racing”. 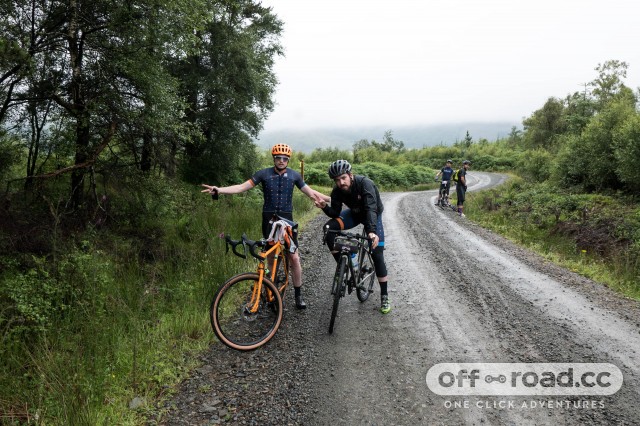 This is reflected in the race format. The Grinduro takes its cue from mountain bike enduro races. On the 75km loop, the important parts are the four timed segments; a 6km fire road climb, 1.5km technical singletrack, a 3km forest track descent and a 2km forest track climb. Only these sections count towards your time, so the rest is about enjoying the ride and scenery and spending time in good company à la Grinduro maxim “maxin’ and relaxin’”

More than that though, the Grinduro is a mini festival and you’re getting more for your money than just a race entry.

The Bicycle Academy was hosting an introduction to frame building sessions, with participants practising brazing a Grinduro bottle opener. A bespoke bicycle exhibition invited four builders – Donhou Bicycle, Feather Cycles, Mercredi Bikes and Shand Cycles – to build their idea of the perfect Grinduro ride, with a public vote choosing the best one. Mercredi was selected with the prize of a trip to ride the upcoming Californian Grinduro. 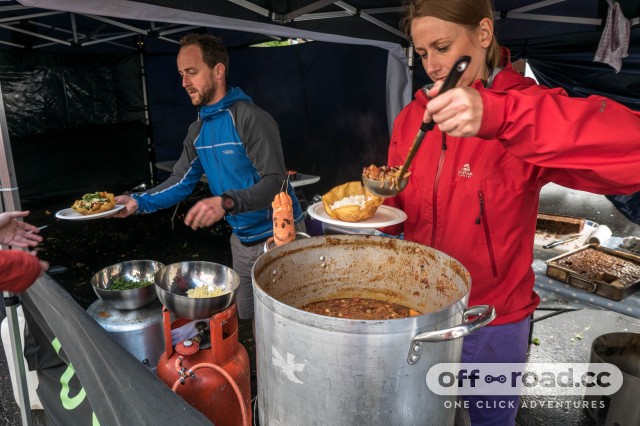 There was excellent food, a bar and live music courtesy of the Van T’s. The buzzing atmosphere after the ride was rife with stories of the challenges and experiences of the day. Various prizes were handed out for category winners, and the spirit of Grinduro prize was handed to two fixed-gear riding strong men who appropriately won a single-speed Charge Plug. 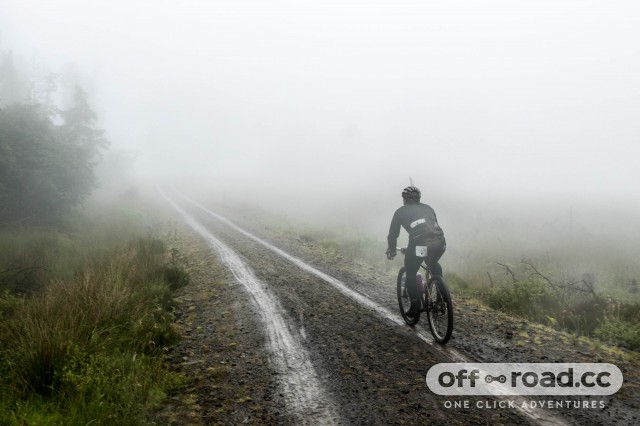 The first stage came up more quickly than expected and the flying start set the tone for the gravel grinding test of aerobic capacity for the duration of the ascent. Being able to rest after means you can push all the harder (and suffer) during the stage!

The transfer to the second stage took in fast yet treacherous wet roads, slippery mud baths, fast gravel descents, went along the coast and gave limited views in the fog. An awesome ridge descent with tight switchbacks had me whooping all the way down.

The second stage was by far the most challenging and really put bike and tyre choice in question. In the dry it would have been a different story, but I felt a little out of my depth on my 32c cyclocross tyres.

Nonetheless I bravely launched myself down muddy chutes, clattered across greasy roots and only “tactically dismounted” (fell-off) a few times along the way. Sadly, my chain jammed itself below my chain guard ruining any chances at a quick time for this segment - or at least that’s the excuse I’m using. 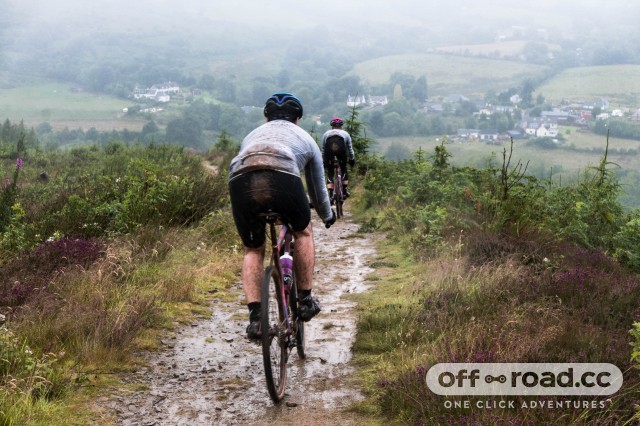 In all honesty, I’m not going to claim graceful riding on this descent - more a clinging on for dear life while grinning maniacally at the ridiculousness of the riding I was doing.

In keeping with the spirit of the event, the next stop was back at camp with a tasty lunch served up. I’ve not done a race with a sit-down lunch before but it could definitely grow on me!

Leaving for the second half of the ride we got to the third timed section. What should have been a blazing fast fire road descending ruckus turned into a bit of a slog with a head wind pushing against us. The final timed segment was almost over before it started. A tactical refuel at the second feed station conveniently located just at the beginning meant I powered my way up on a mixture of coke, jelly babies and cheddar – a potent combination.

Throughout the riding, we continued to be rewarded with flowing single track, spicy climbs, and all manner of fire-roady, grassy, gravelly, muddy fun. Perhaps the most spectacular descent of the day was the final way down to the coast, along a narrow track bordered by ferns and a substantial cliff on the left. Great views and a sense of exposure gave awesome riding. 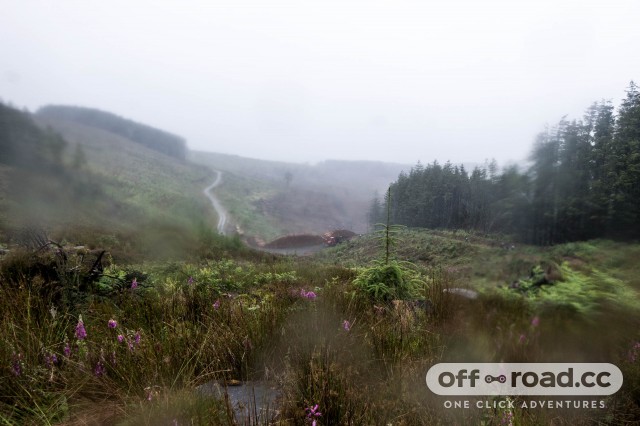 Arran is known as 'Scotland in miniature' and it does not disappoint. With rolling hills, steep mountains, forested dells and sweeping coastlines. It’s really not as remote as many other parts of Scotland, being an hour away from Glasgow and is completely worth exploring in its own right.

Gear for the Grinduro

Before heading to the Grinduro the choice of bike seemed obvious – a gravel bike with decently sized tyres would see me through everything fine and allow me to cover the mileage quickly.

Given the weather, I feel mountain bikes probably had an edge on the day. That’s not to say it wasn’t rideable on a cross/gravel bike, just that the bike probably took on more than it expected. 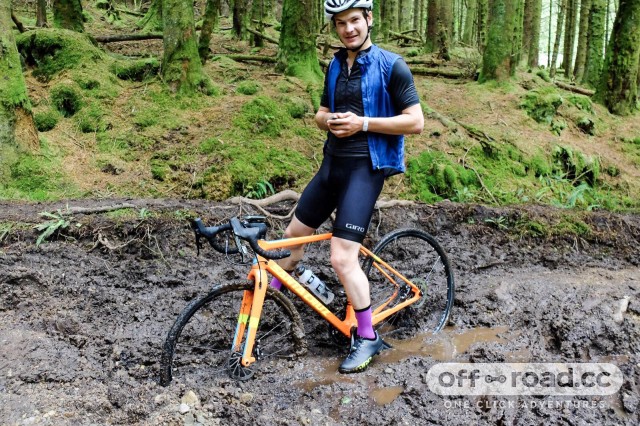 I was fortunate enough to ride a Santa Cruz Stigmata for the weekend, the company’s carbon cyclocross bike.

The bike was fitted with a Sram Rival 22 Hydraulic groupset, DT 370 Hubs, WTB Asym Rims and Zipp finishing kit. Whilst the frame can fit (stated) up to 41mm tyres, it came with disappointingly low volume 32c Maxxis Mud Wrestlers.

I am sure that running them tubeless prevented several pinch flats – there were a few uncomfortable sounding clunks of rim against rock throughout the day.

There is no doubt that the Stigmata is a very assured bike, taking technical riding in its stride. Compared with other gravel bikes I have ridden I feel it has a racier geometry – indeed it is marketed more as a cross bike – and this is noticeable in its faster handling. However, this seems to come at the expense of some comfort.

It was my first time spending extended periods on a carbon frame, and whilst it undoubtedly soaks up high-frequency buzz, the high stiffness and skinny tyres didn’t help with comfort on rough terrain.

Higher volume tyres would have given more plushness and comfort and shown the bike off in a better light. It has to be said that those fitted did still give a decent amount of grip and the narrow profile seemed to cut through the mud quite effectively. However next time I will definitely be using larger tyres – I think the ideal would really be 650b knobbly mountain bike tyres.

I was happy with the groupset, with only the front derailleur giving some issues by the end of the day– though given the muddy conditions I can’t really fault it here. The only significant annoyance I had during the day was that the chain dropped below the chain guard– it took quite a bit of fiddling to get it up again.

I had thought that my braking at the front was a little temperamental by the end of the day and put it down to the general mud and grime. Turns out on inspection that I had worn down to the pad backers – that may explain it as well! That aside braking was consistent and reliable. 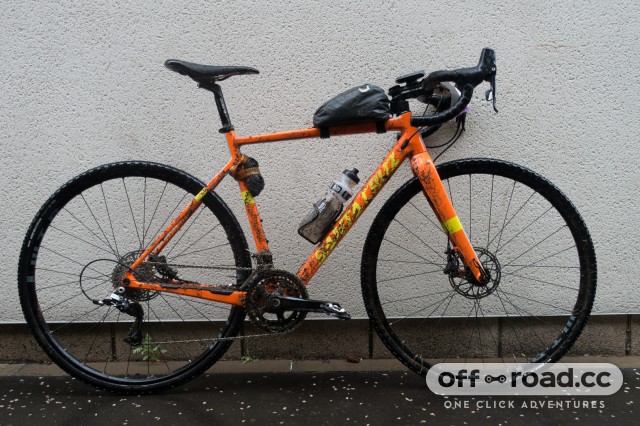 Giro one of the title sponsors for the event were kind enough to provide me with a few pieces of kit for the weekend. I took along the Empire VR90 shoes, Chrono Pro Bib Shorts, Chrono Expert Jersey, DND gloves and the new Cinder MIPS helmet. Impressions for the gear have been very good over the course of the weekend and full reviews will be coming soon after some more testing.

I also took my gilet and a lightweight shell for protection from the elements throughout the day. I kept tools, food and my camera in a top tube bag and strapped pump and spare tubes to the frame.

The Californian event has become very successful, and the UK edition has proved that the concept works here too. Whilst the weather didn’t completely co-operate, if anything it made everything more adventurous. I had an absolute blast and I will definitely be back for more next year. See you soon Grinduro and see all of you there!