Skip to main content
Log In Register
Blind enduro in its purest form, a real gem of an event 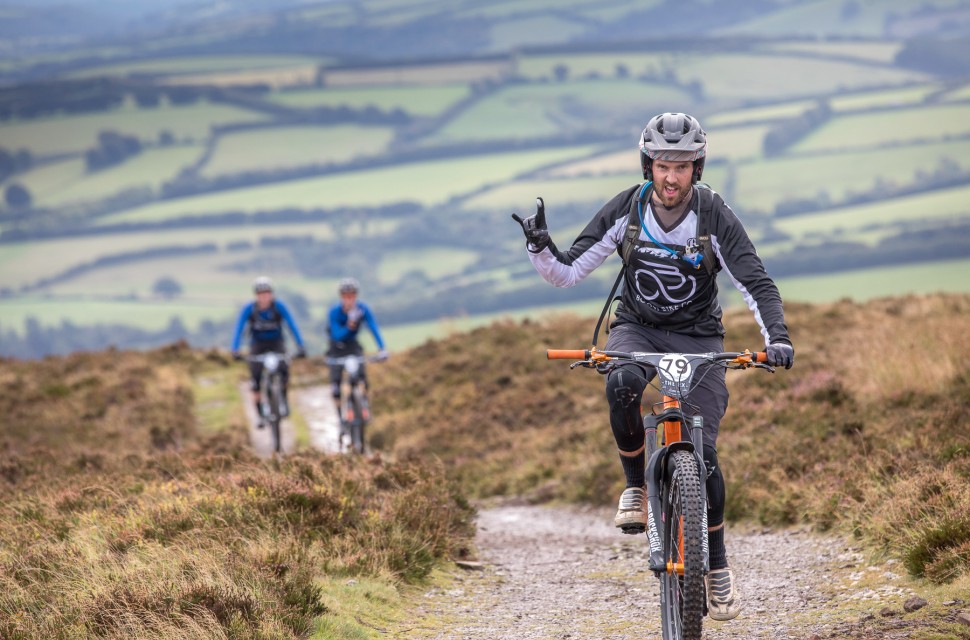 Three massive days, 21 glorious timed stages, 119km of riding, 4,000m of climbing and more cake than 80 racers can conceivably devour, The Ex Enduro is enduro in its purest and best form. This multi-day race is one for your bucket list and 2019 calendar, just make sure you leave room for us!

Last weekend Rachael from the off-road.cc team headed down to Minehead to tackle the much anticipated Ex Enduro. Although off-road Editor Jon had instilled some level of fear for the gruelling liaisons and the tough timed stages, there wasn’t much to dampen the spirits with a packed weekend of riding, tea stops and like-minded company on the cards. Here Rachael gives us the low down as a first timer at the event. 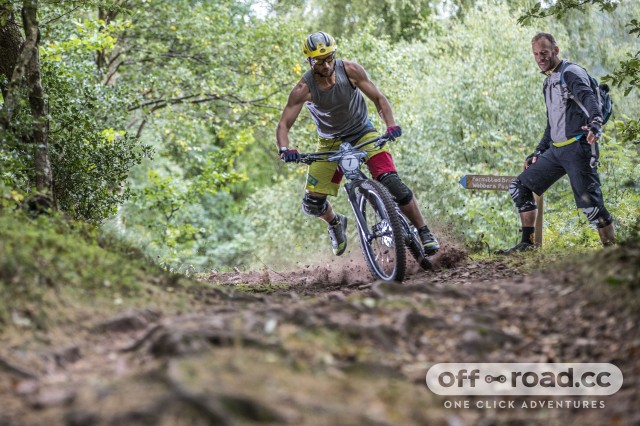 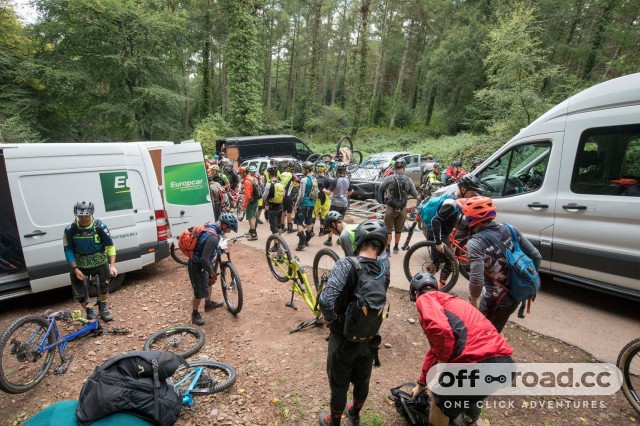 The Ex Enduro is based in the tiny village of Allerford near Minehead; ‘the gateway to Exmoor’. The small settlement is chocolate box quaint and about as 'ye olde English village' as can be, a place that couldn’t be more at odds with the fast paced carbon machines about to be ridden full pelt down the local hillsides! Despite this change of pace, the locals appeared happy to see the race HQ pitch up on their cricket ground, waving the daily uplift vans off from doorsteps each morning. 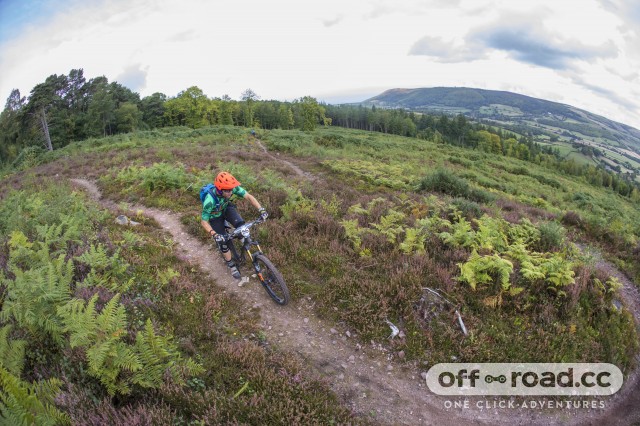 I’m getting ahead of myself though, I’ll explain about The Ex: first and foremost, this is a blind racing multi-day enduro stage event. It’s a race that is billed as being unforgettable, one that manages to ‘bottle the spirit of enduro’ with our Editor, Jon, saying last year he had “three days of cracking riding”. Second place to devising the awesome course and in addition to the racing, the organiser's goal was to create an event that begins with 80 riders and finishes with 80 friends having just shared a superb adventure. It may sound corny and it’s easy to scoff at the so-called ‘spirit of enduro’ but after experiencing the race and being part of the end goal, I can gladly say I’m sold. The long days equated to some fantastic trails and the small number of competitors created a boutique feel, it felt special because, quite simply, it was. 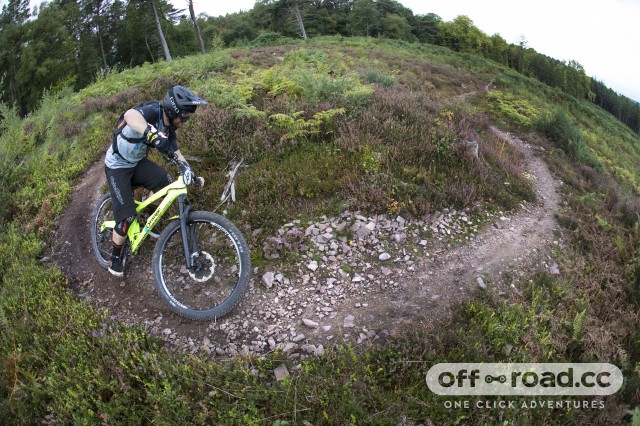 Competitors were invited down to camp from the Thursday night, we arrived at about 7pm to find the BBQ already in full swing and the free (yes free) beer was flowing. After tucking in, we set up camp with some trepidation of the beginning of the race. If you are interested in the in’s and out’s of camp life at The Ex, think ‘glamping’. There was a perfectly level camp field, real flushing toilets, proper showers with hot water, bean bags to laze in, a large marquee with carpeted flooring to eat and shelter from the elements and all you can drink tea, coffee and beer. Plus in the pits there was mechanical assistance on hand from Boost Bike Co., bike cleaning kit in plentiful supply from Fenwicks and on the Friday, test rides available from Marin and tubeless set up’s courtesy of Stans. 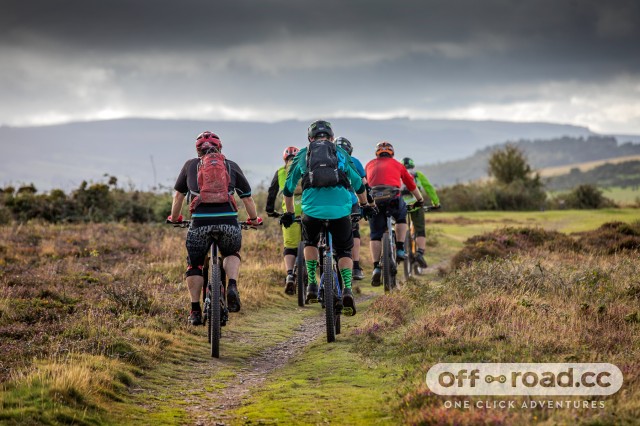 After a hearty breakfast racing began at a leisurely 12pm Friday afternoon, with an uplift to just under one of Exmoor’s fine beacons. The first stage was timed but not included in the overall results, a great decision to eliminate all those ‘first run nerves’ and the crash-inducing over-excitement that so often blights the first stage of an enduro race. The first two stages of the day gave a real taste of the varied terrain we were due to experience throughout the weekend. The two were astronomically different, the first was a loose, rocky bridle path where speed was your friend, where line choice critical. The second stage can only be described as loam heaven,  I rode with a slightly altered version of OPM song ‘Heaven is a Halfpipe’ echoing in my ears (…Heaven is a Loam Zone, needs work, I know) as descended the stage ecstatic at the revelation that the grip was insane – with dry conditions like this, the weekend was set to be a banger! 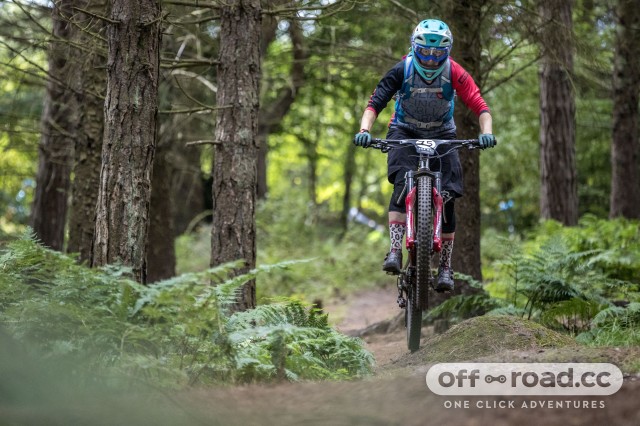 Friday continued much as it started with a perfect variation of trails (including a pretty pedally one), great banter, sunshine and a cold beer to finish. We clocked up 35km, 1,176m of climbing with the descending deficit leaning correctly to the heavier side with 1,530m of downhill, plus, and who can forget it, the traditional Ex Enduro tea party to boost us on our way to the final stage. Despite relatively few female entries, racing was still tight at the top with our freelancer Anna Cipullo (riding for Wideopen mag in this case) take the top spot from me by a clear 20 seconds. 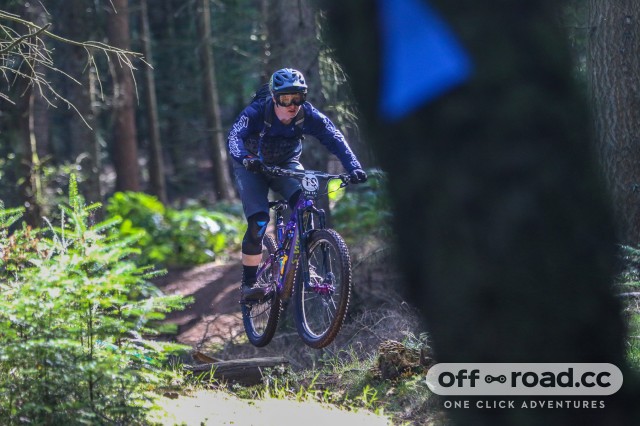 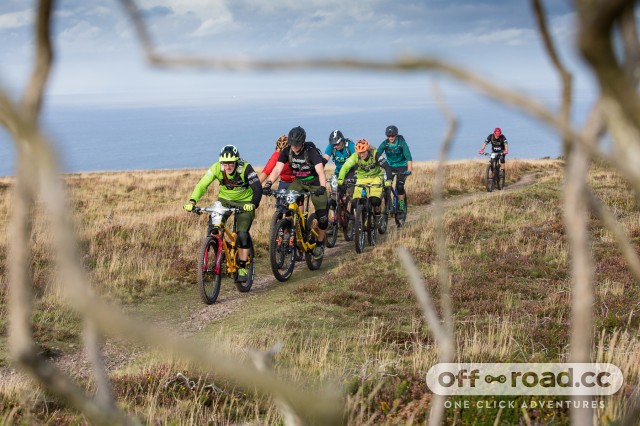 Day two dawned equally a bright as the Friday, clearly (and thankfully) summer wasn’t done with us Brits yet and we were promised another dry day with perfectly formed loam and dry roots enabling some outrageous approach angles! Saturday forced riders to carry everything they needed to get through the day, a feature I really like. I remember starting to race enduro where a ‘compulsory carry' list of items was a thing and I liked it. If a backpack is good enough for Tracey Mosley, its good enough for me, I’ve witnessed T-Mo pull a gear cable out of her pack to help fix up another racer in the past. To take on the big miles of day two you needed a jacket, tools and enough food and water for at least 25 miles until it was tea party time. It's all part of the challenge and it was refreshing to see riders ditch ‘enduro cool’ for hydration and spare kit. Or maybe they took big packs they just wanted space to snaffle scones from the tea stop back to camp, who knows, both are valid reasons to wear one! 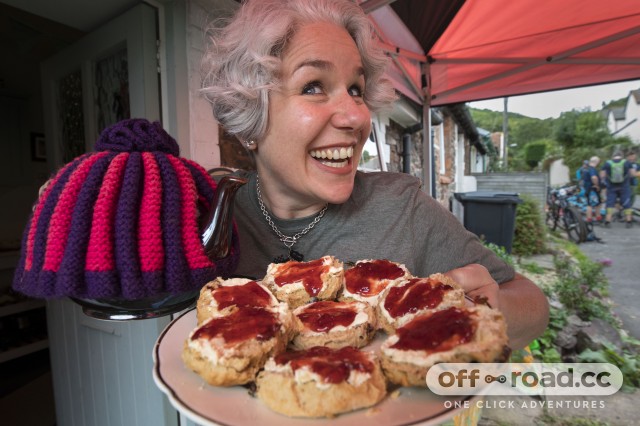 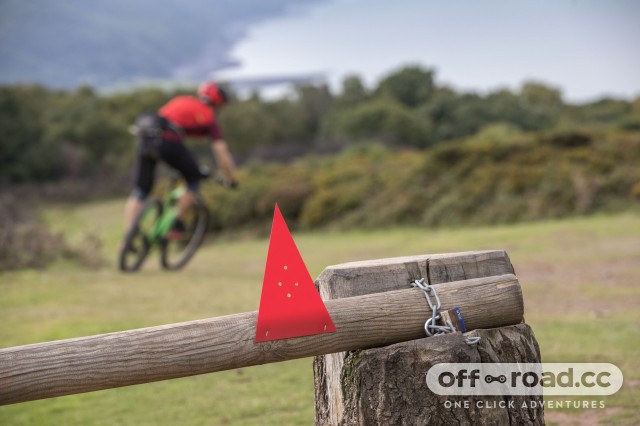 Saturday’s riding grew like a crescendo beginning with a flat out death grip across Goosemoor common, blasting tired legs with a pedally one and then winding up to the last three stages consisting of trails called ‘Doris’, Pinky Finger’ and ‘Meerkat’. If I could only ride three trails again in my whole life these are the ones, ‘Doris’ was an off-camber, loamy delight, ‘Pinky Finger’ was a loose, blown out, steep and chunky woodland fairy tale and ‘Meerkat’ was a rocky, techy trail of tempestuous turns that saw many a rider finish day two with inadvertent meeting of the floor. 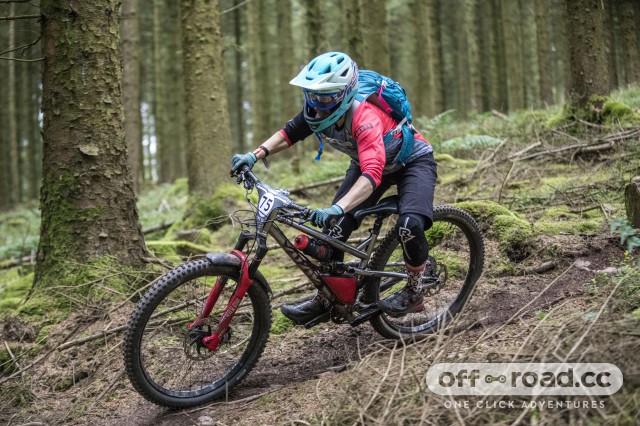 The steeper terrain and saw my longterm test bike (Cotic Rocket) and I fly into first place raising the level of competition between myself and Anna up a notch and the passive-aggressive banter up at least two! DMR provided daily prizes too, with top riders from each category bagging goodies. Overall Day two saw a 7 hour day, 55km and 2,000m of descending, there’s no lying, it was tough and a rather intense silence settled over our riding group in the final hours of the day but it was worth the pain and I’d gladly repeat. 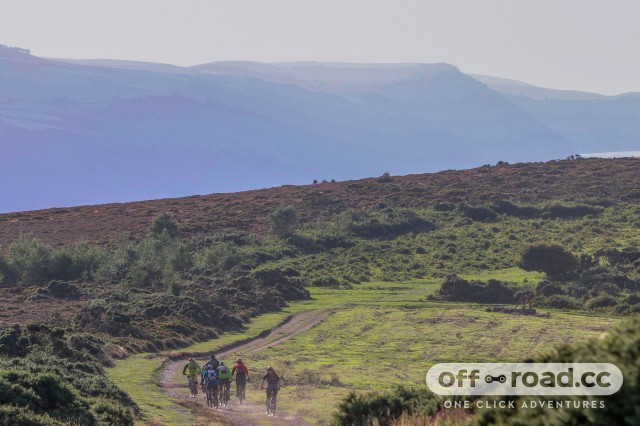 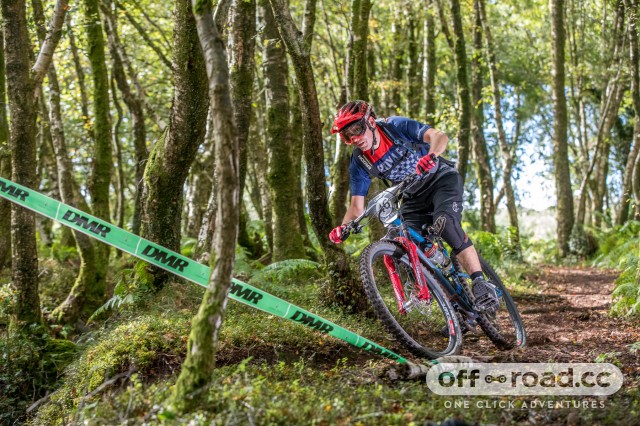 Having legs that were slowly resigning themselves to turning the pedals, I approached day three with some nerves, the lead was mine lose. There was rain forecast and I wasn’t sure if that the was the perfect mixing pot of emotions Vs. weather for optimal performance! Mother Nature kept the rain at bay though, clearly deciding stage two of the day (‘Godzilla’) was spicy enough without any added precipitation. Much to our delight, day three unfolded much as day two had, with the most technical trail out of the way early, we were left to enjoy more natural delights in the woodlands surrounding Minehead before eating our fill of cake, slurping on a coffee for a caffeine fix and spinning up to the last stage of the day where the transition, savagely, was almost a third of the whole ride length in distance. 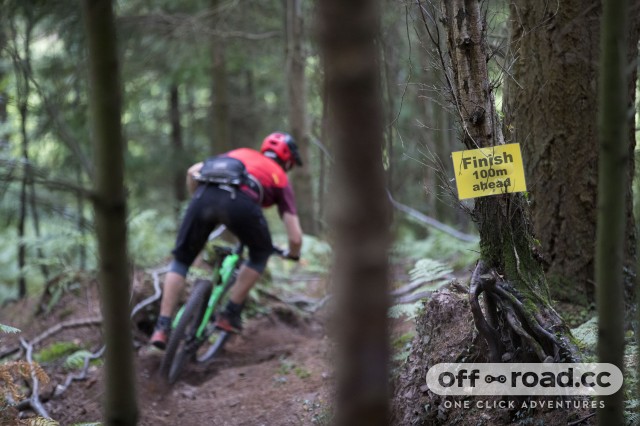 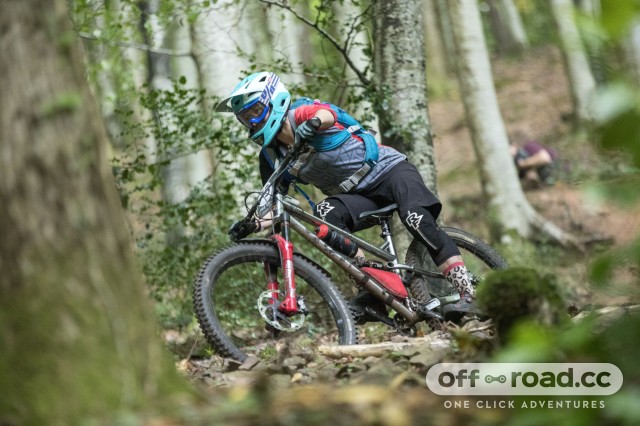 Burnt out and unable to sit much longer on our saddles we gathered at the top of the last stage, in awe of array of awesome trails we had been privileged to ride over the course of the weekend. The final stage was no different, those in the know would have been able to send it flat out of the finish, others without prior knowledge would have been safety braking at lips and at corners slewing time from the clock as they did so. Such is the nature of blind racing, having never ridden around Minehead before (I’m sad to say), I’m proud to have ridden everything totally blind, it has compounded that this is my favourite way to race. It primes the senses, makes you feel alive and pushes adrenaline through the veins faster than you ever thought possible. 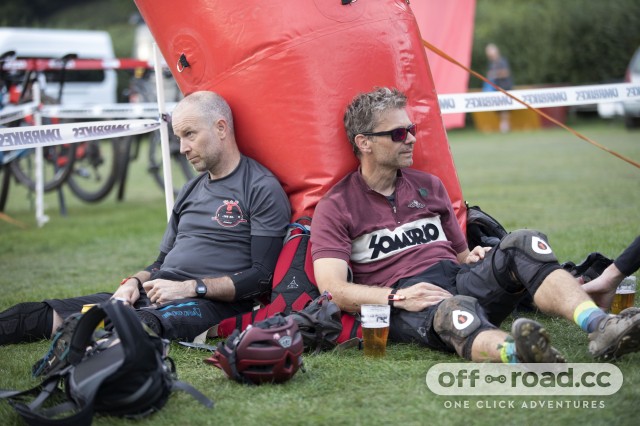 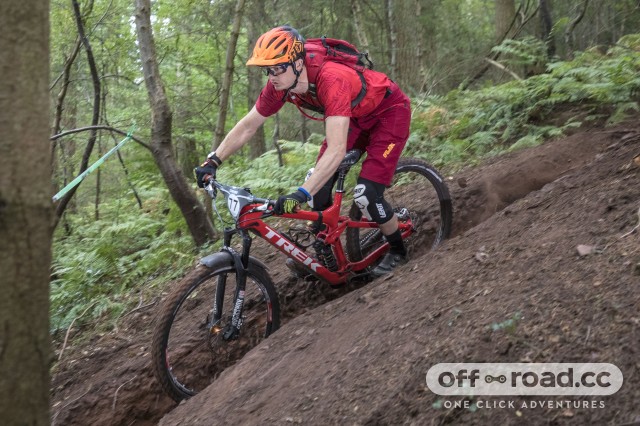 Strava recorded that we still clocked up 5 hours or riding time, 1,250m of descending and a not too shabby 30km on the final day. Anna proved she was the one with the clear race head and systematically destroyed me on all but one stage on the third day to take the overall title of fastest lady 2018 and the win. Good work Anna, proving our choice of freelance journalists is top dollar too! 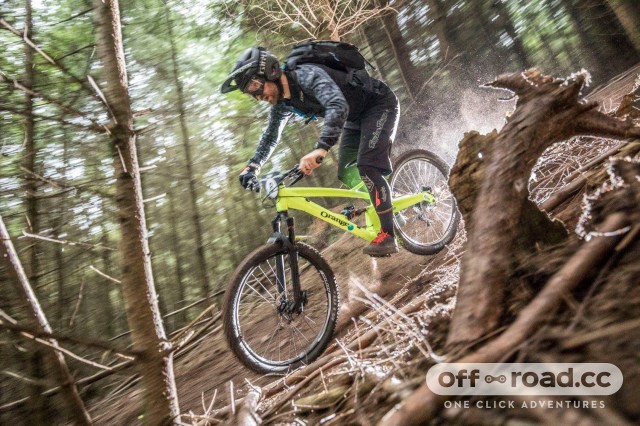 It won’t take a rocket scientist to work out that I enjoyed The Ex Enduro immensely, the event is a true gem. With over an hour of race time on the cards and as much yummy food as you can eat, it’s banging value for money. The friendly organisers and enthusiastic marshals ensured the event ran like clockwork, the attention to detail was excellent, the vibe was friendly, relaxed, yet professional and the main draw, the trails, were outstanding.

If you like a big challenge, enjoy an adventure over quintessential British countryside, want to make new friends and revel in racing natural hand-cut trails then get The Ex Enduro in your 2019 calendar, just be prepared for a fight as I know 80 other riders that also want a place.