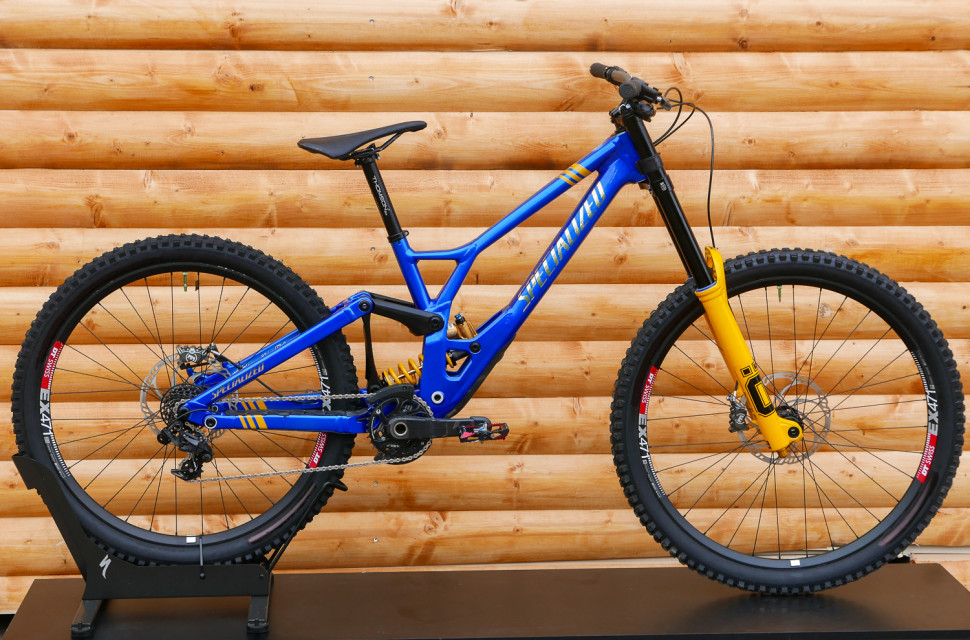 It's been a very good year for French downhill racer Loic Bruni; not only did he clinch the overall UCI Downhill World Cup win, but he was also only the second male downhill racer in history to clinch three successive World Champs gold medals too. We took a look at his heavily modified 2020 Specialized Demo 29 while at the Roc D'Azur - not far from where he cut his teeth on the trails of the French Riviera.

This particular bike is the custom painted machine he took that that World Championship win on and as is traditional, it got a rather special blue metal flake paint job just for the occasion, with Specialized even etching the shock link with his name. However, there's much more to this bike than initially meets the eye, with some really trick technical tweaks and touches. 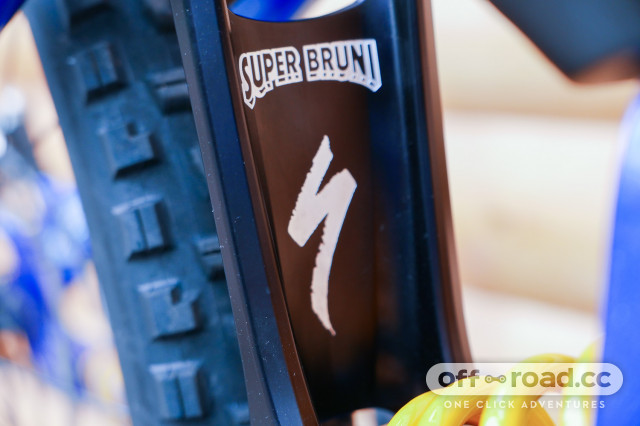 Firstly, while the standard 2020 Specialized Demo rolls on 29" wheels at either end, Loic has chosen to use a mismatched setup with a 650b wheel in the rear and a 29" up the front. Doing that will slightly slacken the head angle and drop the bottom bracket - he wasn't around to ask why, sadly. 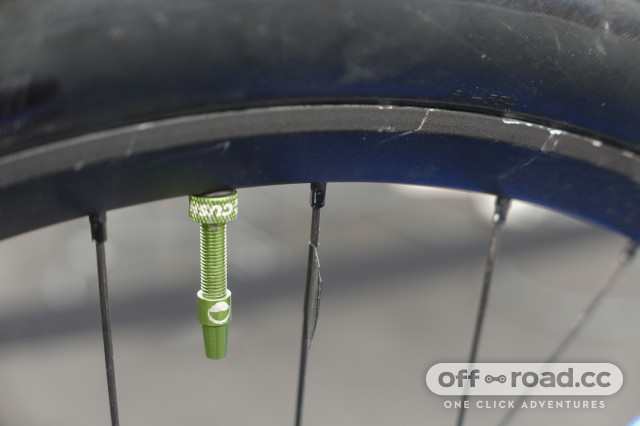 He's also using some Maxxis tyres, with a 2.5" Wide Trail Minion DHF up front and a 2.4" Minion DHR at the back, both in reinforced Double Down casing and 3C compound - though the logos are blacked out, what with Specialized having their own range of tyres. 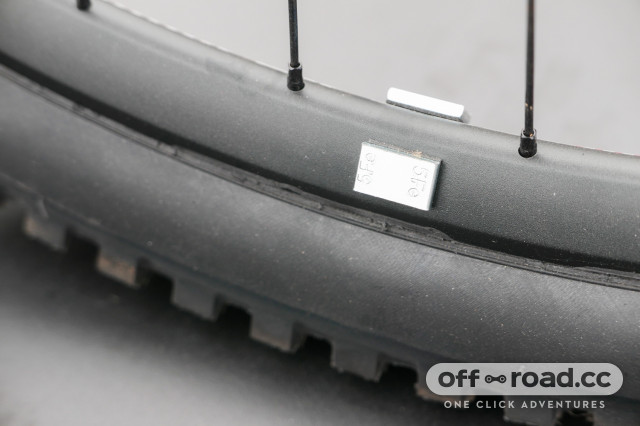 The Cushcore valve stems hint that he's likely using that puncture prevention system in both tyres - and there are some lead weights stuck on the rim opposite them, presumably to balance everything out at high speed. We can't say we've ever noticed our wheels getting wobbly at speed, but then again, we've never won a World Cup Downhill, so what do we know? 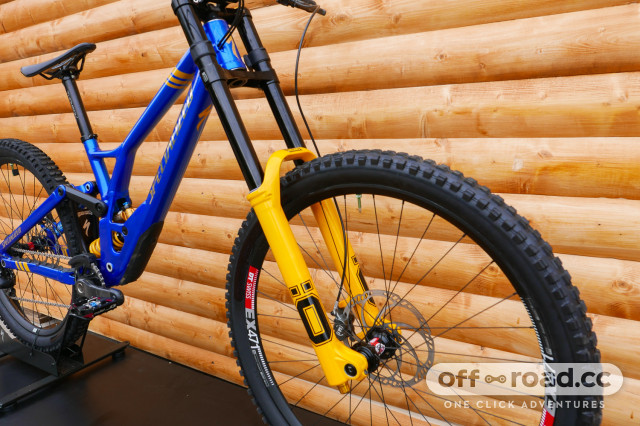 Loic is running Ohlins suspension at either end, with a DH38 Race fork up front and TTX22 coil at the rear. The fork is available with offsets from 46-58mm and we're pretty certain that he's likely to be using the shortest ones possible.

The fork gets high and low-speed compression plus rebound damping adjustment and it uses an air spring with adjustable progression. We're guessing he's running at the full 200mm travel, but it's internally adjustable down to 160mm should one wish to do that.

The rear gets the same three-way damping adjustment but seems to be running custom valving just for Loic, as indicated by the sticker. The lower shock link also looks to have been given a good going over with a Dremel; again, we're not sure why but it's a prime candidate for a bit of drillium lightweighting. 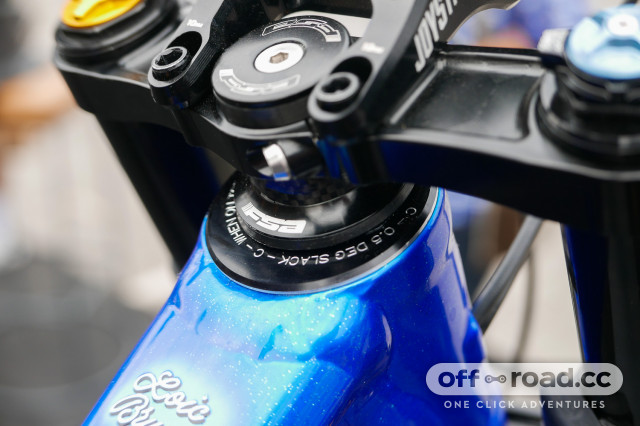 Rather interestingly, the bike is running offset headset cups, set forward to increase reach over standard. That's not uncommon on many downhill bikes where riders desire a longer reach for extra stability - but that's not what's trying to be achieved here as he's also running an eccentric bottom bracket that's pressed into the Press-Fit 30 bottom bracket shell and set so it moves the crank axle forwards. 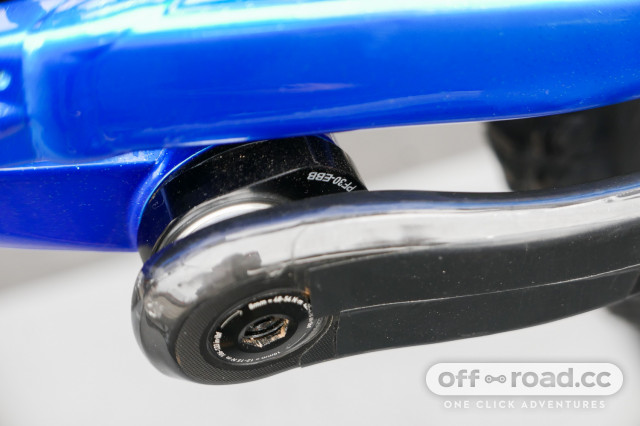 It'd seem that Loic isn't a fan of the Demo's 450mm chainstay and wants to make it effectively longer while keeping the same reach. It looks like he's using this Wheels Mfg Eccentric PF bottom bracket which gives a total of 12mm adjustment, meaning a 6mm longer chainstay here - and most reach adjusting headsets have 5-6mm of adjustment, which would balance out the change in reach shunting the crank axle forwards provides. 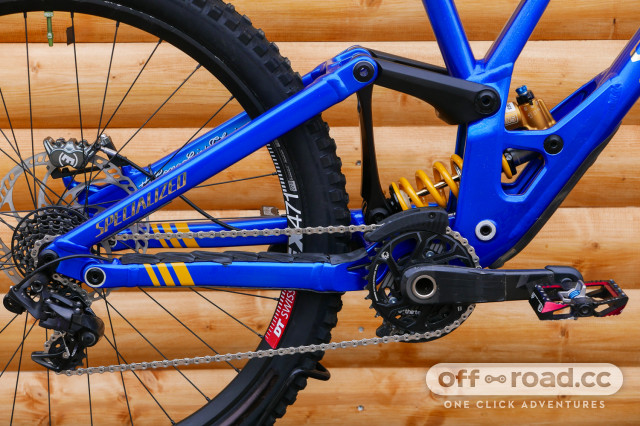 Elsewhere, the bike is much more standard, with Magura's MT7 four-piston brakes hauling up on 203mm rotors at either end. The drivetrain is SRAM's X01 DH setup with seven close ratios at the rear and carbon armed cranks with only an upper e*Thirteen chain guide at the front. The shifter has seen some tweaks though, with the lower lever cut down to a tiny nubbin that's then been covered with grip tape, presumably to aid rapid shifts with a minimal change of hand position. 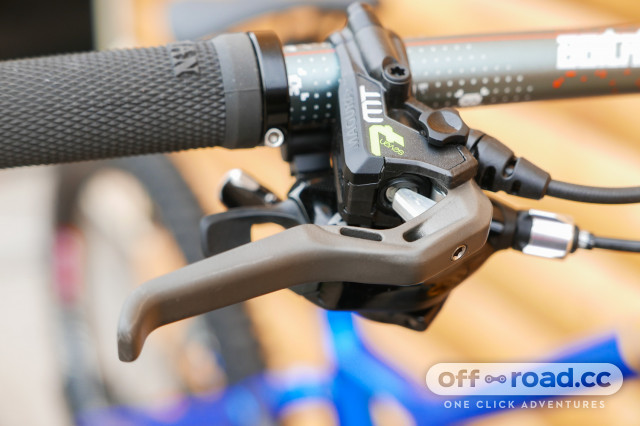 Of course, Loic is running his signature 'Super Bruni' Crank Brothers Mallet DH pedals and a full-width Joystyick 8Bit Alloy handlebar in 31.8mm clamp diameter. It's interesting he chooses not to use the 35mm clamp option they also make - too stiff, perhaps? He's also running the Joystick Binary direct-mount stem in the 50mm setting rather than the 45mm option it also provides. 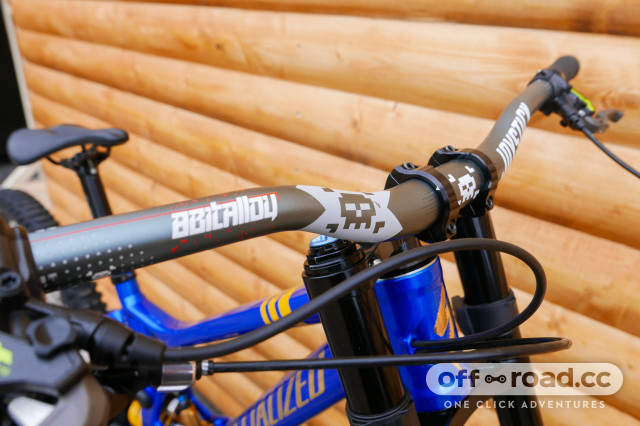 Thanks to Specialized France for being ever so helpful and letting us take the bike off the stand.