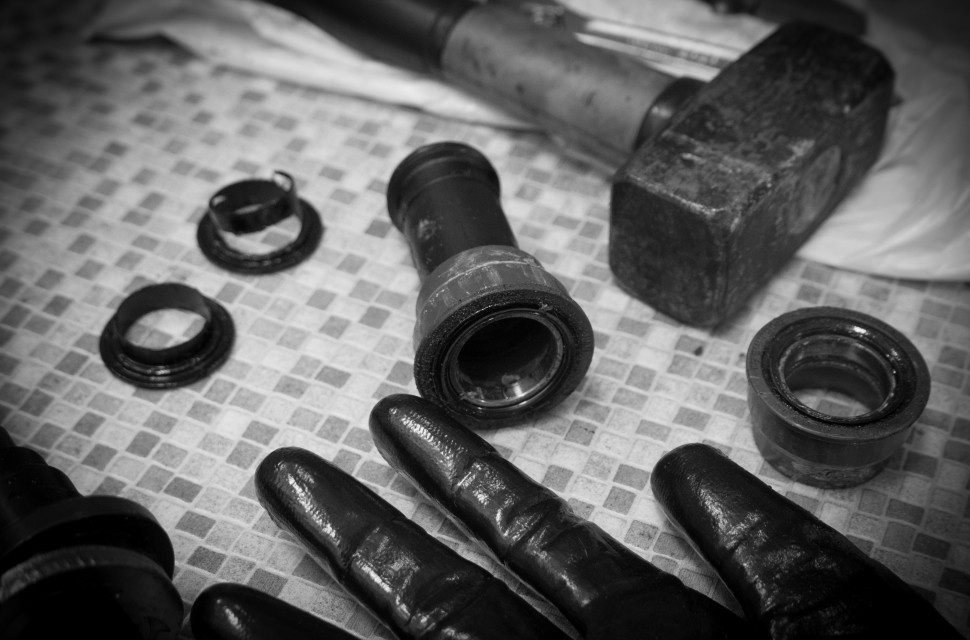 Dear bike industry, whatever we did to deserve the Press Fit bottom bracket, I am very sorry for it. Please, can you stop punishing us in this cruel and unusual way?

It can't be easy being a bike designer, I know. You spend so much time and effort in creating new standards that are superior in every way to the old standards and then all that happens is that you get a hard time for even more standards. Yes, it must be tough when all the comments on the internet just have bad things to say about you as a person, simply because you tried to make riding better for everyone.

I know all this, but taking it out on us with Press Fit bottom brackets just isn't the answer. There have been so many good innovations - the tapered steerer tube, the through axle - damn, I'll even say that I think Boost spacing is a perfectly fine idea - but there really wasn't anything wrong with putting a bottom bracket in via a thread.

Yes, I know you keep saying that Press Fit is lighter and makes producing bikes faster and cheaper, but in your heart of hearts, you know that having to remove them using a hammer and a piece of metal simply isn't right. I mean, what if you want to remove it without smashing it into a thousand pieces? Or avoid having your soul filled with dread because of the bad noises you're having to make around that oh so delicate carbon fibre?

It would be easy to think you deserve this revenge because of all the mean things we said about those new wheel sizes you keep creating, but I am sorry for that. Most of them did make a difference and it's not your fault that it took a while for everyone to stop being nasty about 29" wheels.

Okay, so a lot of the people who were all jaded and cruel about that new carbon fibre layup you spent years developing were bike shop mechanics and yes, that's who Press Fit hurts the most but do you really think it's right to punish everyone else with a bottom bracket that squeaks endlessly and wears out within a few months?

I mean, it's not even hurting the people that you think deserve it - it harms the people that really believe in what you say and buy in to the new technology you've made the most. If anything, it just provokes the kind of people that stop you on the trail and force you to talk at length about how their 26" wheels are perfectly fine and their 7-speed chain has lasted the past twelve years into doing that sort of thing even more.

Can't you see this destructive behaviour has to stop? I know you want to take it out on someone because all the good stuff you do isn't appreciated, but this isn't the way.

Let's stay as friends and just start over again. We'll think carefully about the new things you make and give them a fair chance before writing any knee-jerk reaction comments on the internet forums - and all you have to do is stop making bikes with Press Fit bottom brackets. Deal?

It would stop me buying a bike. "speak with your feet / wallet", I'm sure there's a saying in there somewhere.....

Upmountains - Is that the same as when you are in the doctors 'asking advice for a friend' ?!

So, did you all notice that the new Kona Process G2 has a press fit BB - will you be raving about it so much now? #devilisinthedetail

Creaks can destroy a person or their relationship with a bike. Not bottom bracket related but I know someone that once filled their Commencal frame with expandifoam in an effort to prevent cable rattle, shame they forgot to thread the rear brake hose through an outer hose first...... that stuff sticks.

Well said that man. Room 101 for press fit BB's
You cannot get them in colours and they put you off riding your bike and maybe even stop your friends from giving you a call to ride with them. Creak CREAK creak CREAK