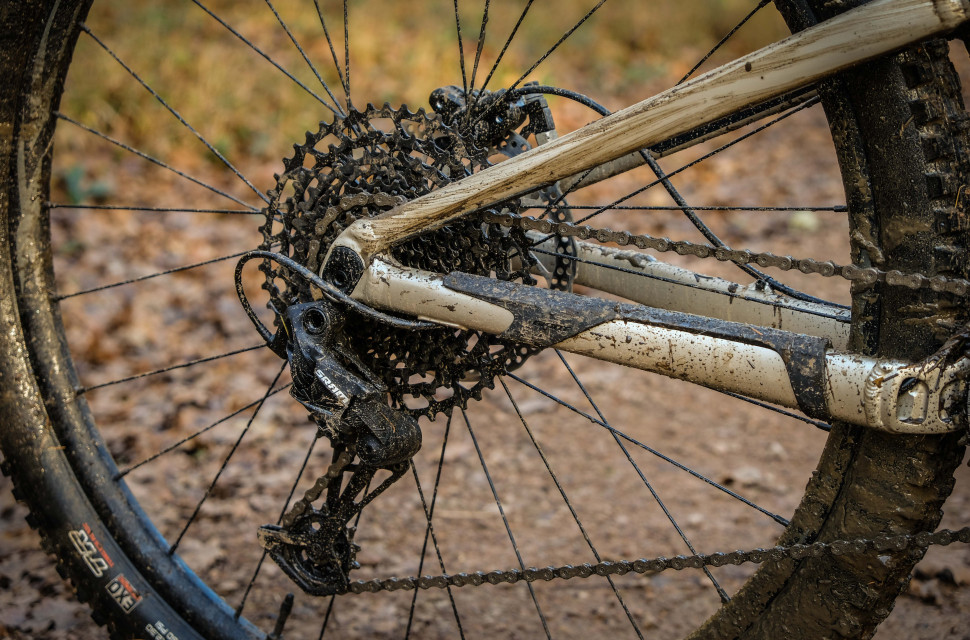 Do you know your SX from your GX, do you know that DUB isn’t just a genre of music and are you up to date with the Eagle Expansion details? Here is everything you need to know about the various mountain and gravel bike SRAM drivetrains from cassettes to cranks to brakes. We’ll start cheap with SX and NX and work our way up to the new AXS electronic drivetrain.

To start off, we will explain the SRAM drivetrain hierarchy, the brand labels its gear according to families with a single ring only drivetrains getting a ‘1’ in the name, separating them from options including double or triple rings up front. Drivetrains labelled XX are top dollar with GX and then NX sitting at the bottom of the widely use mountain bike options, there are also X3, X4 X5, X7 and X9 parts for the 7, 8 and 9-speed bikes out there.

What do SRAM's drivetrain names mean?

Here’s a simple list from most expensive to the least, hit the links below to hop straight to that section:

These are commonly found on budget bikes, X3 is solely for 7-speed kit that is used for ‘recreational bikes’ rather than any mountain bikes we are likely to test here at off-road.cc and X4 just offers a shifter and rear derailleur for 7, 8 and 9-speed drivetrains. X5 is a whole trail worthy 10-speed drivetrain but the rear mech doesn’t have a clutch, this is likely to be fitted to entry-level hardtails and comes in a 2x or a 3x configuration.

X7 is also a 10-speed drivetrain (2x or 3x) but this one gets SRAM’s Roller Bearing Clutch on the rear mech to stop that chain dropping off. It also is compatible with SRAM’s matchmaker system allowing you to clamp shifter and brake together on the bars. This is an example of the trickle-down tech from higher up the range, it also gets X-Glide shifting making for more precise shifts.

X9 is a bit like Shimano SLX in terms of quality, it’s a 10-speed drivetrain with 2x and 3x cranksets, its lighter than the X7 due to hollow crank arms and is reportedly more durable too. 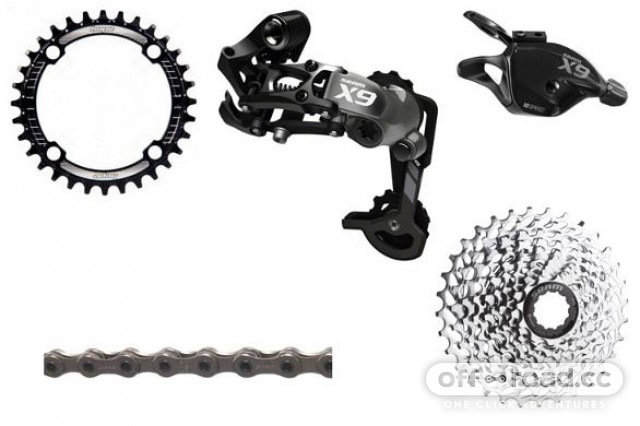 Sticking with the 10-speed drivetrains we have SRAM X0. This is a 2x or 3x drivetrain that has a smattering of carbon fibre parts too. This makes it more expensive than the likes of SRAM NX but it’s not 1x specific (no ‘1’ in the name as a giveaway) but it’s aimed at a different crowd. This is a trail and XC drivetrain for those who like 2x but don’t want to spend XX money.

After the dawn of Eagle, we’ve not seen this kit specced on new bikes for a while now but it is out there. There is also a heavier hitting X0 for downhill bikes including a  crankset and 10 speed, short cage mech aimed at downhill and 4x bikes. Generally speaking, XO kit is comparable to XT in terms of spec, although the carbon fibre bits and bobs might make it a bit lighter. 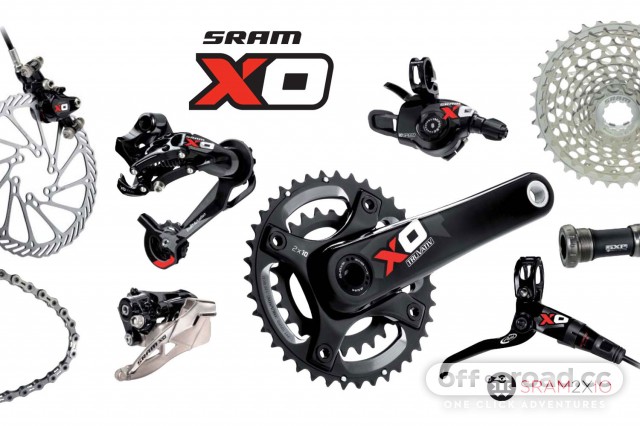 A pricier 2x option, XX is a cross country drivetrain that uses both carbon and titanium, plus CNC machined alloy parts to keep the weight down and the bling factor up. For price comparison’s sake an XX rear mech with a carbon fibre cage and ceramic bearings  will set you back £235 whilst the equivalent X0 mech will cost about £160 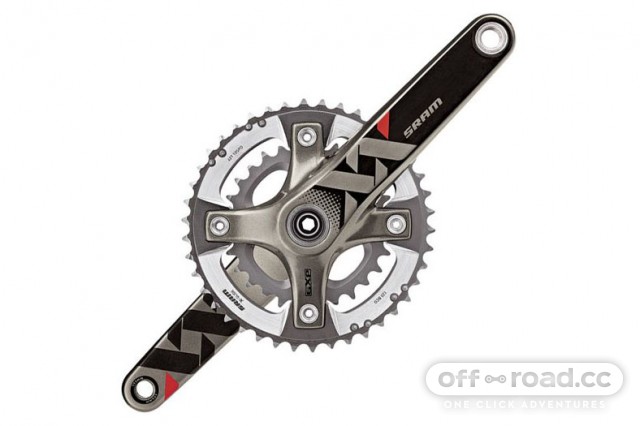 The SX Eagle groupset sits at the lowest rung of SRAM's 12-speed Eagle drivetrain lineup, but all the components share a similar outline, most obviously in the largest 50T sprocket of the cassette. Much like the NX Eagle group, the SX Eagle groupset doesn't quite get the huge 500% range of the top tier groups as it uses a conventional Shimano HG freehub body rather than the dedicated XD driver. That means being limited to an 11T smallest sprocket on the cassette rather than the 10T item, though still giving a very wide range of 454% thanks to the dinner plate-sized 50T sprocket.
The chainset comes in at least two variants, with an outboard/Press-Fit bearing 'DUB' bottom bracket and crankset setup as well as a cheaper inboard bearing 'Powerspline' bottom bracket.

The derailleur once again shares a similar outline with the higher-level groups, with the use of different materials allowing SRAM to produce it at a lower price point. The cage is made of stamped steel pieces with the mech knuckles being made of injection moulded plastic, held together with rivets, presumably without any special bearing or bearing material and the plastic jockey wheels run on plain (rather than ball) bearings.

There are lots more details and weights for all the parts here. 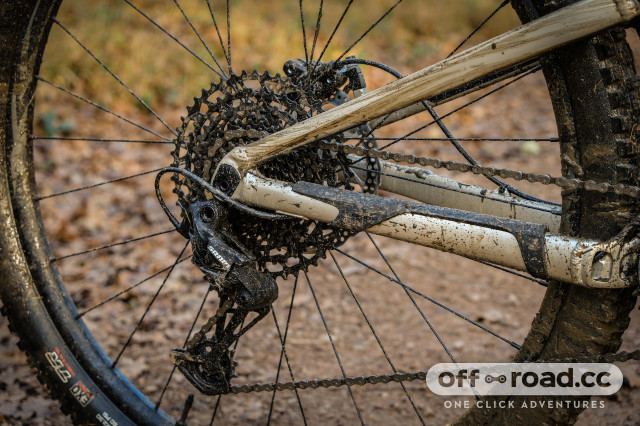 SX Eagle and NX Eagle are the drivetrains we see most often on the bikes we test here at off-road.cc. NX comes in 1x11 or 1x12 options. The drivetrain gets an alloy or steel chainring and for the 11spd an 11-42t cassette. The 12spd Eagle gets a direct mount chainring a cassette boasting an 11-50t range of which 8 cogs are steel and 4 are alloy. The mechs for both drivetrains are a mix of aluminium and steel making them heavier than more expensive drivetrains such as GX. 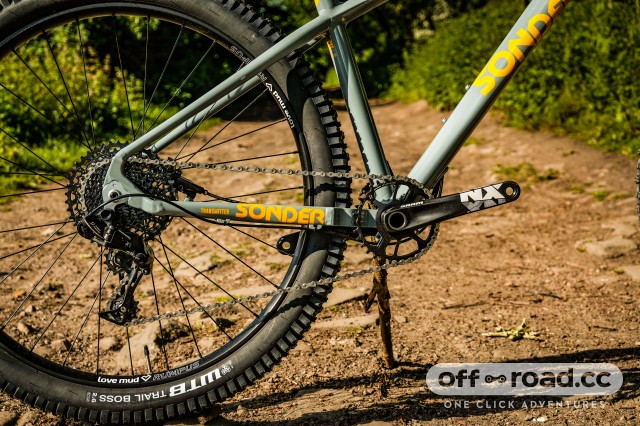 Pricier than NX, GX as well as being sold as 1x11 and 1x12, is also available as a 2x11 and 2x10 drivetrains as well as a 7spd downhill groupset. The 11spd cassette either comes as a one-piece stamped steel or steel with one alloy cog whilst the 12-speed gets a one-piece steel option held together with stainless steel pins. The 12spd rear mechs have alloy bodies with steel cages whilst the 11spd mech is all aluminium. The drivetrains benefit from trickle-down tech from the higher end SRAM groupsets. 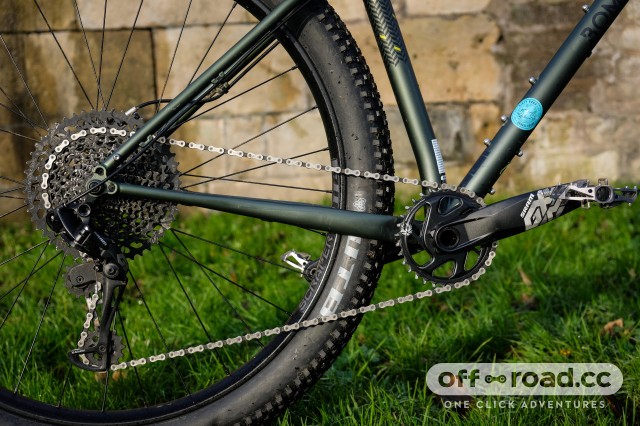 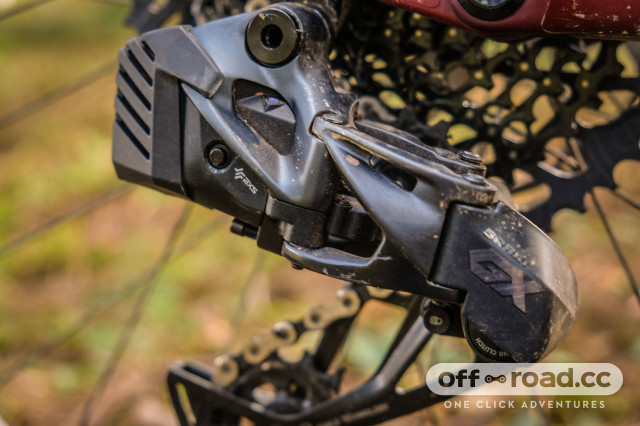 Fresh for 2021, the GX Eagle drivetrain benefits from the long-awaited trickle-down of SRAM's AXS tech. Available as both a full drivetrain but the brand wants it to be seen more as an upgrade kit. Meaning, for £554 you can pick up a new wireless mech, shifter, battery and charger, gracing your bike with fancy wireless shifting.

The mech now gets an Overload Clutch which protects the internal gearbox motor from damage in the event of a crash. If the derailleur gets knocked, the clutch will disengage, allowing the mech to move freely and hopefully saving you a nasty bill. The setup then uses a similar shifter as the pricier AXS options.

With the introduction of three brand new drivetrains, SRAM has brought a 520% range to the lineup. The new 2021 Eagle Expansion line includes GX, X01 and XX1 builds featuring redesigned derailleurs, cranks, and shifters with backward compatibility. There are lots more details in our news piece here but in short, there is a new cassette with a 10-52t range (520%) available in GX, X01 and XX1 specs. There is also a new mech too, SRAM has updated cage architecture to improve chain management. While the new mech is optimized for the 10-52t cogs, it's also backward compatible should you decide to run the regular 10-50t cassette. Steps on the cassette from the 10t to the 42t cogs are the same as regular Eagle cassettes with a last big jump from the 42t to the 52t. 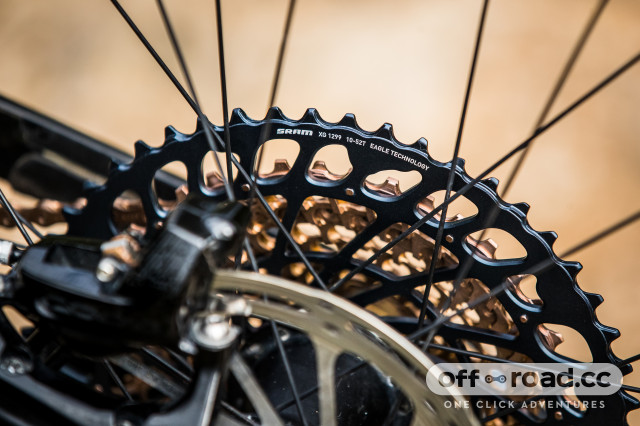 The E in the name denotes that, yep you guessed it, this is an e-bike specific drivetrain. This has a heavy duty 8spd cassette, chain and shifter designed to withstand higher loads and increased forces that might be present. The largest cog is also positioned slightly inboard compared to regular drivetrains to prevent cross chaining. The 8spd block still has a range from 11-48t, so larger gaps between cogs but still cogs sitting at both ends of the spectrum as per a regular cassette. 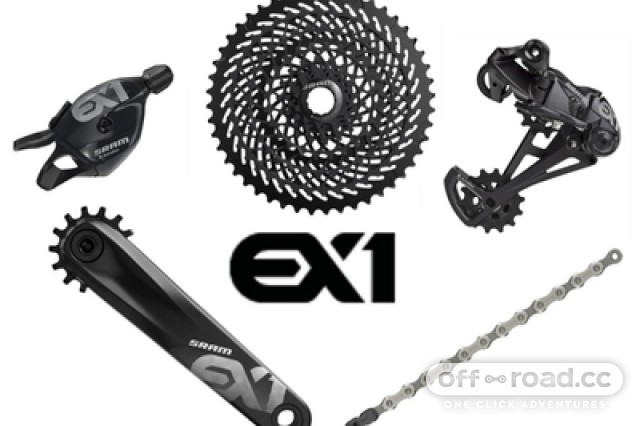 X1 is SRAM's staple 1x11spd drivetrain, it's not hugely expensive and features tech included in the higher end gear. There’s a ‘Mini Cluster’ cassette that is constructed with three cogs machined from a single billet of steel and the additional 8 cogs pinned together as per GX. The big difference between X1 and something like X01 or XX1 is the use of aluminium cranks rather than carbon. 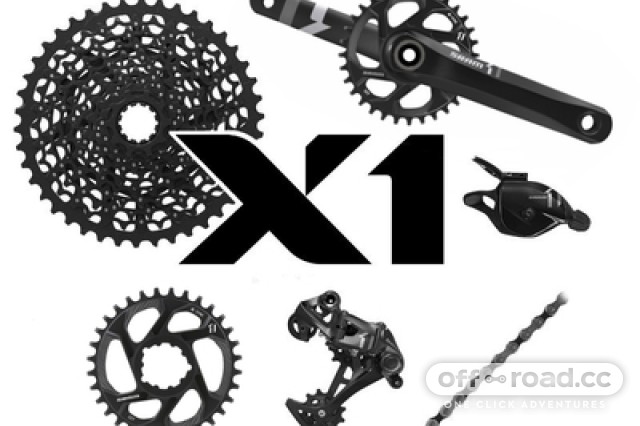 X01 is one price bracket more expensive than X1, its very similar to XX1 in terms of tech but the focus here is on durability rather than weight-conscious riders. As a result, it's heavier but perhaps sturdier. You can get X01 7 and 10spd DH drivetrains and X01 1 x 11spd, plus X01 Eagle which gets a one-piece Chromoly cassette with an aluminium 50t cog and an aluminium mech with titanium spring. There is also X01 Eagle AXS if you fancy an electronic drivetrain, everything you need to know about this is here. 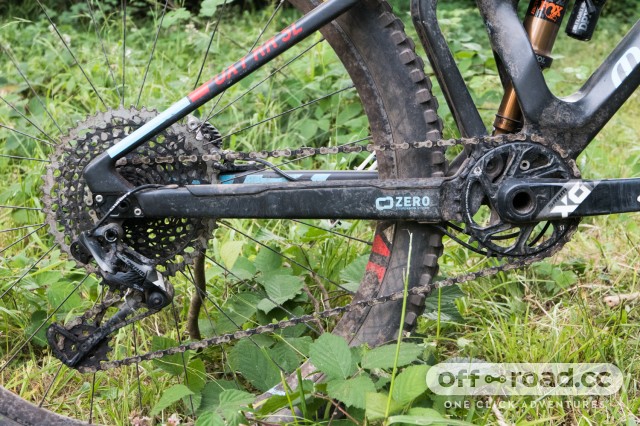 Another step up the ladder brings us to XX1 and XX1 Eagle. These are the no expense spared, flagship models. There is more carbon and CNC’d aluminium to bring the weight down further. Of course, both are 1x only and the 11psd mech’s get ceramic bearings plus a carbon cage.

The XX1 Eagle gets the swanky gold Titanium nitride colouring and no, if you want to fly under the radar with your expensive bike parts it's not going to happen, this is not available in black. If all that isn’t top-flight enough, then there is always electronic XX1Eagle AXS, the newest addition to the SRAM range. AXS uses a bar mounted control system to operate the wireless rear mech driven by a motor. Both XX1 and X01 AXS are reported to weigh about the same as the relevant mechanical drivetrain, in fact, SRAM say they are about 5 and 15g lighter respectively! 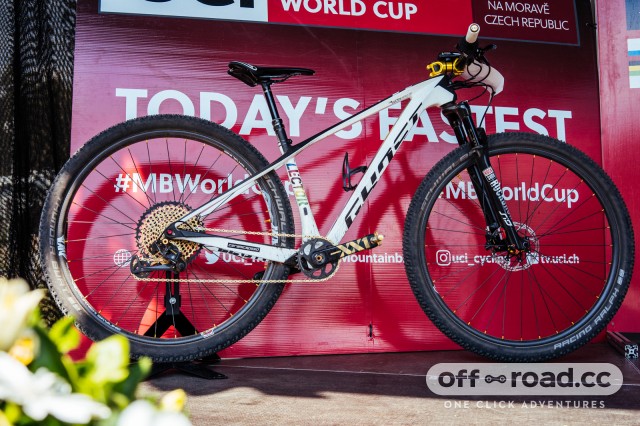 We've also written about SRAM mountain bike brakes, giving you a full run down of the options, plus some handy linked reviews so you are best informed before your purchase.